Get the app Get the app
Get the latest news on coronavirus impacts on general aviation, including what AOPA is doing to protect GA, event cancellations, advice for pilots to protect themselves, and more. Read More
AOPA will be closing at 2:30 PM ET on November 25, 2020, for the Thanksgiving holiday. We will reopen at 8:30 AM ET on Monday, November 30, 2020.
Already a member? Please login below for an enhanced experience. Not a member? Join today
News & Media Training Tip: Standing up for turbulence

What’s the most remarkable item (that’s a hint) in this surface weather report? 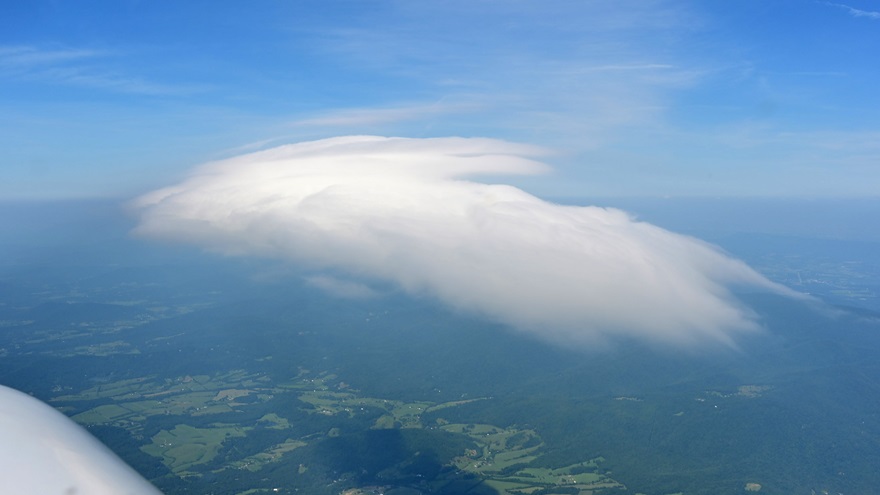 Yes, the wind’s strong and gusty, but that’s not it.

Visibility's fine, no help there.

There are some clouds at two levels of the atmosphere, but ho-hum. And the altimeter setting of 30.08 inches is as normal as can be.

We’ve now pushed all the way over to the remarks (there’s that hint again) section, where we find and decode the shorthand note about 34-knot peak blasts of that southerly wind. We’re getting warmer, but we are not quite there yet.

Leapfrogging the sea-level pressure (SLP) entry, next we encounter an observation quite unusual for this airport that sits in flat country at 200 feet msl: “ACSL NW-NE.”

This item would be no mystery to a glider pilot, or to a powered-aircraft pilot who flies in mountain country. Down in the flatlands, however, it may feel forgivable to be flustered—but free yourself of that formulation before your flight test.

The notation ACSL warns that “altocumulus standing lenticular clouds” are observed northwest through northeast of the airport. It is there, at considerable distance, where many of Maine’s most majestic mountains are situated; the observation suggests that a mountain wave, often associated with severe turbulence or worse, has formed across the region.

The FAA publication Tips on Mountain Flying discusses the mountain wave phenomenon: “When the wind speed is above about 25 knots and flowing perpendicular to the ridge lines, the air flow can form waves, much like water flowing over rocks in a stream bed. The waves form down wind from the ridge line and will be composed of very strong up and down drafts, plus dangerous rotor action under the crests of the waves. If enough moisture is present, lenticular clouds can form to give a visual indication of the wave action. These clouds are reported in the remarks section of hourly sequence reports as ACSL (altocumulus standing lenticular) or CCSL (cirrocumulus standing lenticular).”

The clouds form at the peak of the mountain wave, and so appear to “stand” still. Seeing a remark about ACSL in a flatland airport weather observation demonstrates why, even if you don’t fly in the mountains, being able to interpret a novel weather phenomenon is critical to making safe decisions about flying.