Get the app Get the app
News & Media Chart Talk Destination: Asheville (AVL)

Asheville, North Carolina, is one of the most picturesque places in the country. Tucked into the Blue Ridge Mountains of western North Carolina, the airport (AVL) is in a valley south of the city at an elevation of 2,162 feet above sea level. 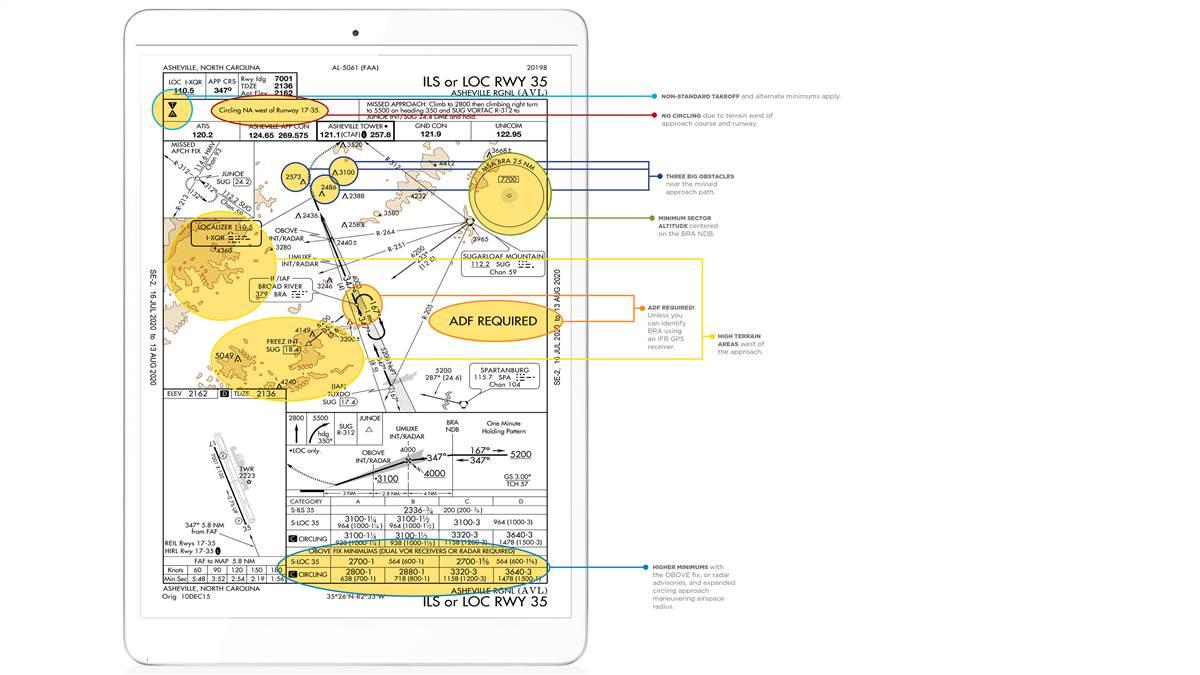 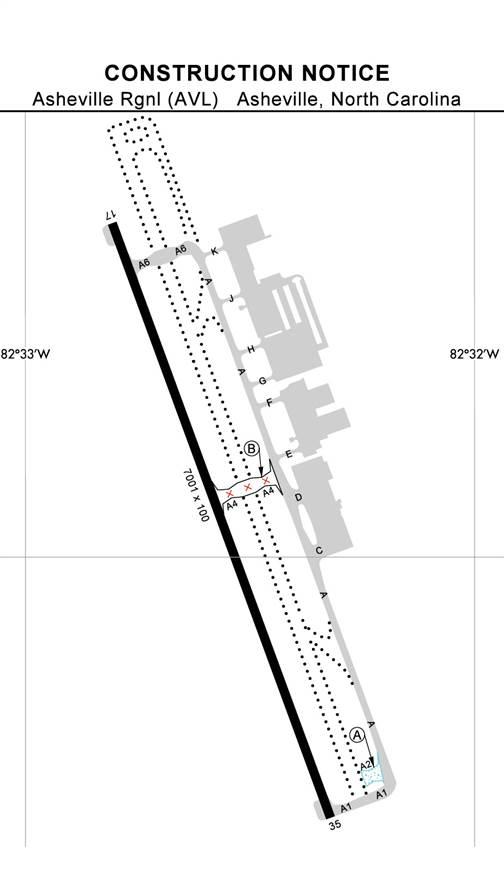 It’s the valley that makes things interesting. The single runway (currently, as another is under construction) is oriented north/south as 17/35, with 35 being the most frequently used. The runway is 7,000 feet long and grooved, but with the extra elevation, the density altitude can make that seem much shorter on a hot summer day. In fact, if you’re landing on 17 off the RNAV approach, you can expect to touch down about 1,500 feet down the runway, which is worth noting.

It’s also worth noting that Runway 35 has right-hand traffic because of the terrain. Keep that nonstandard pattern in mind if you plan to fly the full approach during VFR conditions. The basics of the approach are straightforward: 110.5 MHz for the ILS frequency, 347 degrees for the inbound course, and the decision height is 200 feet, which is standard. There is no offset on the approach, and you can use the Sugarloaf VOR to verify your location at multiple points along the final course.

If you’re coming in from the north, you can expect some unusual altitudes for intervening level-offs in order to maintain proper terrain clearance. The minimum safe altitude is 7,700 feet with the Broad River LOM being the reference point. Terrain is an issue in all quadrants, but it is especially pertinent almost due west of the runway, where the highest point is 6,057 feet msl—almost 4,000 feet above touchdown zone elevation. Terrain rises quickly to the west side of the airport, and while the terrain to the east is a bit less intimidating, it’s still an issue. There are multiple points above 4,000 feet msl, and towers are all over the place.

The airport is in a valley south of the city at an elevation of 2,162 feet above sea level. It’s the valley that makes things interesting.The terrain creates some potential for weather to play a major role. In the late summer and early spring, fog can be an issue until the temperature comes up enough to burn it off. You can’t be complacent with any kind of ground-obscuring weather, but that is even more paramount at an airport like this one because of the terrain.

The terrain is also an issue with respect to the winds. I’ve been in and out of Asheville with some pretty ferocious winds, and wind shear is a real threat. The climb and descent in and out of the valley can be bumpy to the point of being uncomfortable, and it is likely to start a few thousand feet above the terrain. The higher your altitude when the turbulence begins, the worse it’s likely to get as you descend.

If you’re flying a piston airplane, you’ll also want to stay ahead of the game with respect to your mixture setting, because you will be descending through 3,000 feet on the approach—but if you have to go missed, you’ll be climbing back through 3,000 feet fairly quickly.

Make sure you do a good brief of the missed approach. The obstacle departure procedure (ODP) for Runway 35 calls for a climb gradient of 410 feet per nautical mile, while Runway 17 requires only 250 feet per nautical mile. Again, the issue is terrain. However, the missed approach hold at JUNOE is roughly 20 miles away, so there is no need to panic. Take your time, clean up your configuration, and enter the hold (if necessary).

AOPA has warned pilots about high fees at this airport. See the fees for your type of aircraft in AOPA’s airport directory.

Like other approaches in mountainous terrain, the two key considerations here will be situational awareness for the terrain and weather, and energy management for the final approach and touchdown. If the winds or rain are too much, don’t hesitate to divert. If the conditions are VFR, enjoy the view, but keep your head in the game. And by the way, this is an airport where an autopilot will be a great safety enhancement, as it allows you to more easily monitor the big picture.