Get the app Get the app
Get the latest news on coronavirus impacts on general aviation, including what AOPA is doing to protect GA, event cancellations, advice for pilots to protect themselves, and more. Read More
Already a member? Please login below for an enhanced experience. Not a member? Join today
News & Videos Finish strong

We stink at landing airplanes. As much as we all like to think that we have superior skills, the statistics say otherwise. If you’re going to focus on improving one aspect of your flying, improve your landings 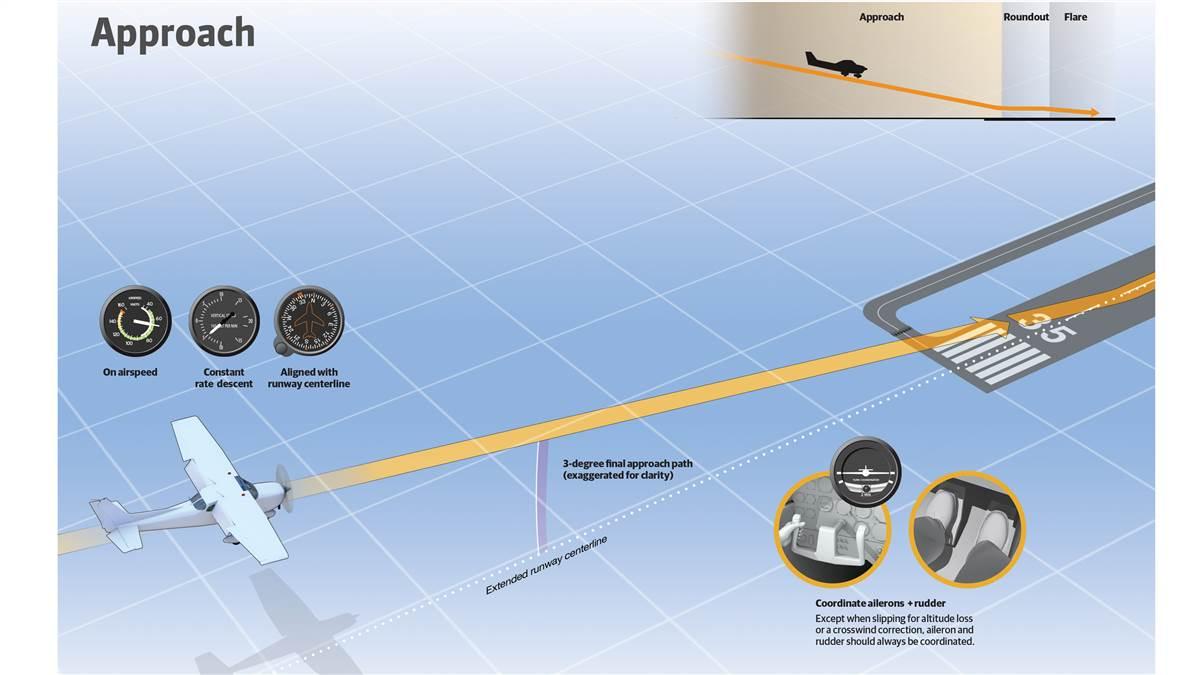 How has something so simple become so confused?

Crab with a kick, or slip? It doesn’t matter. When the wind is blowing the end is always the same (unless you are a lucky duck with castering mains).

Pilots make crosswind landings more complicated than they need to be. The goal in defeating crosswinds is the same as on normal landings. You must keep the nose straight and stay on the centerline. With no wind we can get away with being lazy. But crosswinds expose our lousy technique.

Say it with me: Keep the nose straight with rudder and stay on the centerline with aileron. It’s not so much a technique as it is a mantra. Yes, it’s one more variable to manage during a landing, but with an hour of hard practice most pilots easily pick it up. You just need an instructor eager to teach you. Most important, be disciplined. Employ the technique in all crosswinds, even those that look tame. —IJT

It’s time to get real.

Landings as a weak point makes sense. Most mistakes at altitude are never noticed. But a mistake on landing means there’s something to hit. And, as pilots, we hit it all: the runway, the runway lights, the grass, ditches, signs, hangars, other airplanes. You name it and we’ve pranged it.

Plus, landings are difficult. Airport environments can be tricky, the approach involves managing multiple factors at once, the airplane’s energy state is constantly changing, and there’s a relatively fine line between greasing it on and banging it on.

Every year general aviation airplanes are involved in about 300 landing accidents and maybe six times as many incidents. During a randomly selected 10-day period this June there were 118 aircraft incidents and accidents. Of those, 59 can be attributed to landing problems. In other words, almost six times a day someone lands gear-up, lands so hard the gear collapses, ground loops, lands short, lands long, or gets pushed off the side of the runway by a crosswind. Is it any wonder insurance rates are high?

Stop the madness. Landings can be difficult, but they need not be complex. It can help to think of a landing in three distinct phases: the approach, the roundout, and the flare.

You’ve heard that stable approaches make for good landings. In jets and other slippery aircraft the safety benefit of a stable approach is undeniable. But are they as important in smaller piston-powered aircraft? I think the answer is a qualified yes.

Approaches are like a bargain piece of meat. In the hands of a good cook, a cheap cut can be transformed into a great meal, but in the hands of a lousy one, prepare to order takeout. If you are making consistently poor landings, such as landing long, then short—or if you bounce, then float—shoddy approaches could be the culprit. Experienced pilots flying low-energy airplanes off large runways can identify approach problems early, fix them, and go on to make good landings. But newer pilots, or those flying off short runways or in slick airplanes, don’t have either the skill or the time to identify the exact problem and apply a quick solution to guarantee a good landing. 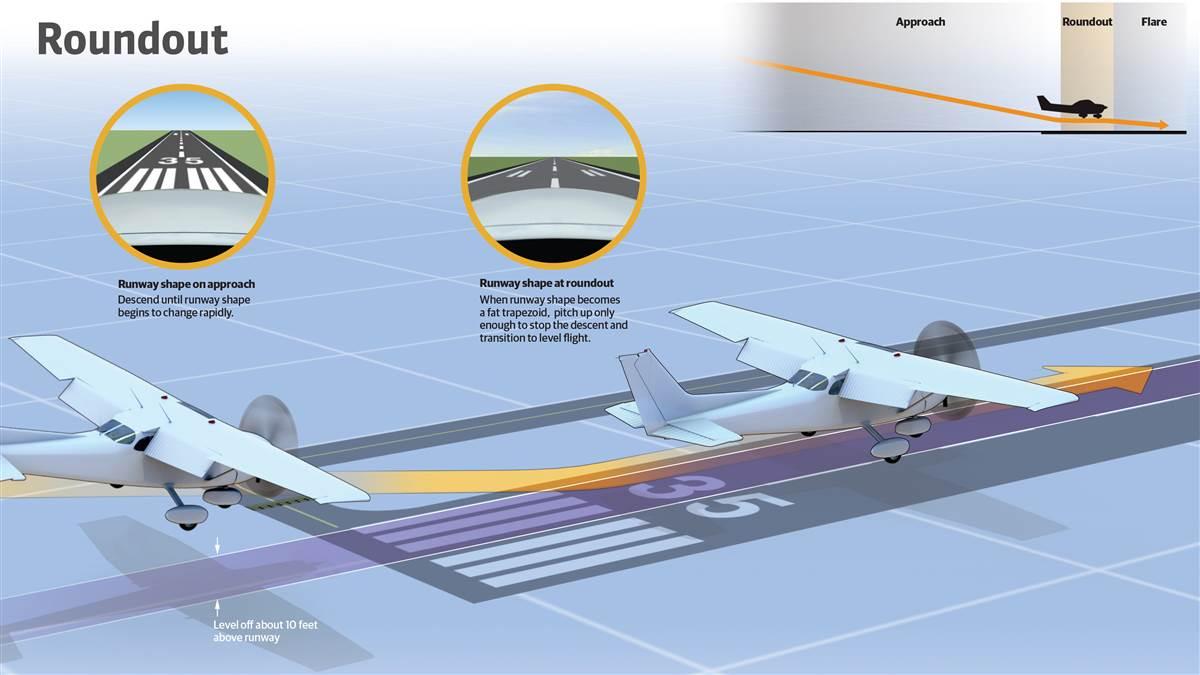 Stop the madness. Landings can be difficult, but they need not be complex.

If your landings aren’t consistent start by looking at the approach. A good approach is simple to identify and define. It’s always on glidepath, on speed, and requires a minimal amount of input from the pilot. If the wind is light and the air smooth, the approach will be a constant-rate descent with a slowly decreasing airspeed. If you’re always adding power, retracting flaps, speeding up or slowing down, or consistently off the glidepath, go back to basics and work first only on improving your approaches.

Instructor and author Rod Machado thinks making great landings starts with rudder coordination, a skill that should be taught early, and one that can be easily evaluated on the approach. Machado cites the Ercoupe as proof of this. Designer Fred Weick claimed he repeatedly soloed Ercoupe students in fewer than five hours, in part because they didn’t have to worry about rudder coordination. “Rudder and aileron coordination is the nemesis of learning to land,” Machado said. “It’s a testament to teaching this skill prior to teaching landings.” Learn to coordinate the ailerons and rudder, and the next steps will be more successful as well.

The hardest part of landing, and the step that most determines the landing outcome, is the roundout. This transition from descent to level flight just inches above the runway is sometimes grouped in with the flare, but it’s important enough, and a distinct enough skill, that it deserves its own examination. Do it at the right height and at the right speed, and you will see your landings improve dramatically. That’s easy to say but hard to do.

The tricky part comes with knowing when to begin the big pull to transition from descent to level. Some of the finesse comes from experience, but some can be taught. Machado has a great trick for this, and if you watch landing videos on YouTube you can see it in action. Assuming the airplane is on speed, about eight to 10 seconds prior to the wheels touching down the shape of the runway rapidly changes. It goes from being a gradually increasing strip of pavement in the windscreen to a fat trapezoid in just one or two seconds. Some describe it as a sensation of rushing toward the runway. This is when you start to pull. Then the only difficult part is to pull only enough to stop the descent, and not so much you start climbing again. A few low passes down the runway can help refine this technique and better acquaint you with the right sight picture. 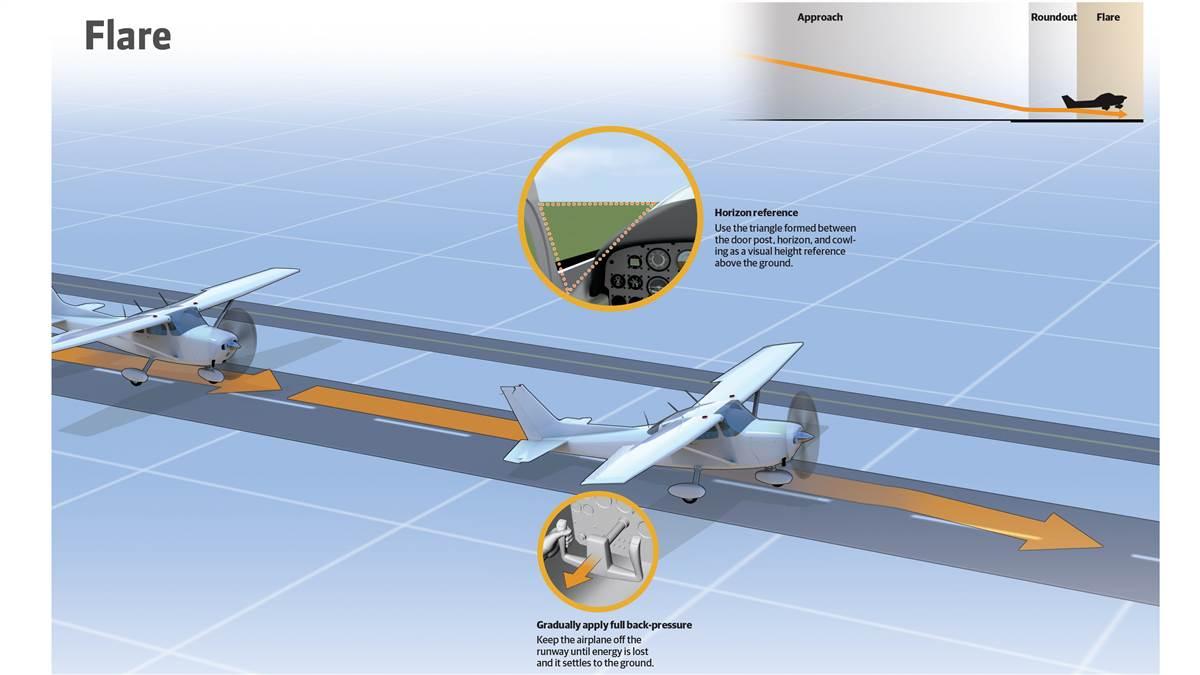 If you’ve rounded out at the right height, all that’s left to do is track the centerline and keep the airplane off the runway for as long as possible. If the roundout happened at the right speed, the flare should only last a few seconds, and the transition between the roundout and the flare will be relatively seamless. As you pull back to flatten the attitude and transition to level flight, you’ll wait just a second or two, and then start pulling back to keep the airplane off the runway.

This portion of the landing is what makes pilots look good. It separates the good landing from the great landing, and it’s a great time to diagnose issues. Bounces, skips, balloons, and floats all become apparent in the flare, although most are symptoms of problems that occurred in a previous landing segment.

The goal of a flare should be to keep the airplane off the runway as long as possible. Assuming you’ve leveled off at the right height and on speed, this will take a smooth application of back-pressure. You must feel the airplane’s energy. Pulling too quickly initially will result in the airplane ballooning, but too slowly and the wheels will touch down early. As the airplane slows and the energy draws down, you’ll need more back-pressure to keep it off the ground. The motion looks like a slowly accelerating pull from neutral to full back, depending on the airplane and center of gravity.

Every pilot struggles with finding the right place to look down the runway to judge the airplane’s height and avoid ballooning. Here again, Machado has a great tip. He said that most of us are taught to look over the nose of the airplane, but if you’re landing properly, you shouldn’t be able to see over the nose. Instead, he suggests looking at the triangle formed between the horizon, the door post, and the edge of the cowling. This will give you a horizon reference, and give you a reliable place to judge the airplane’s height above the runway. And especially as you age, Machado recommends physically turning your head toward the pie-shaped cutout to better take in the visual cues.

Everyone wants to make better landings, and the first step is being honest with yourself about your abilities. Don’t be too proud to consult another experienced pilot or an instructor. The world’s most elite athletes, top CEOs, and best artists look for ways to continually improve, and as pilots, so should we.

The doctor is in

Ballooning, floating, skipping, bouncing, and slamming down don’t happen randomly. Each is a symptom of a landing disease that can be easily cured.

Ballooning. All of the sudden you’re 10 feet in the air again, but this time with no energy. What happened? You were fast and you pulled too hard in the roundout. To fix it, stay on speed and remember the roundout is a transition from approach to level flight. A few low passes down the runway can help refine the roundout and cure ballooning.

Floating. The easiest of all landing diseases to cure, floating is a clear symptom that you’re carrying too much speed. It creates long landings, and it makes rounding out more difficult than it needs to be. Most pilots tend to make their final approaches too fast. Work on making landings at the ragged edge and you’ll find that most manufacturers already suggest a generous safety margin in their published speeds, and there’s no need to add more (in most conditions).

Bouncing. Was it a hard bounce with a spring back up into the air? Two things are going on here. First, you’re too fast. Most airplanes on speed that touch down early shouldn’t have the energy to spring back into the air. The second problem is that you’ve touched down too soon. This is the setup for a pilot-induced oscillation or a runway excursion. Airplanes become hard to control when they are going too fast on the ground or near it. A good pilot can save it after one bounce, but a second calls for an immediate go-around.

Skipping. A small skip or hop is like the common cold of landing diseases. Everyone gets them and they aren’t dangerous. You’ve touched down too early or with too high a descent rate. Hold it off a bit longer and the wheels will plant.

Slamming down. Assuming you attempted some type of roundout, touching down firmly isn’t usually a big deal. Normally it’s caused by misjudging the roundout height. Round out just a bit lower or higher, and you’ll never have to worry about a firm arrival. —IJT 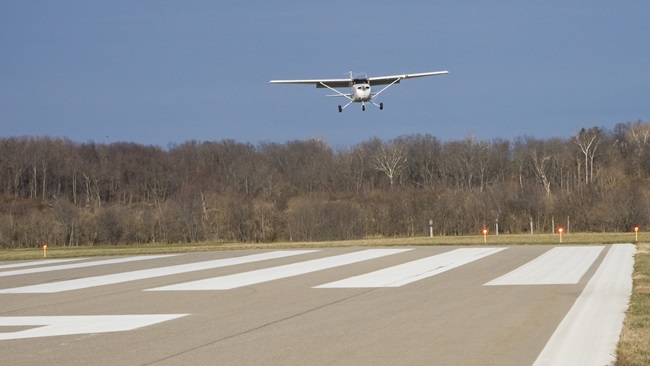