Get the app Get the app
Get the latest news on coronavirus impacts on general aviation, including what AOPA is doing to protect GA, event cancellations, advice for pilots to protect themselves, and more. Read More
Already a member? Please login below for an enhanced experience. Not a member? Join today
News & Videos Ownership: All lose when Beech meets bird

It was the sort of call no aircraft owner ever wants to get: “There was an incident with your airplane. Everyone is OK,” AOPA Live Executive Producer Warren Morningstar told me. 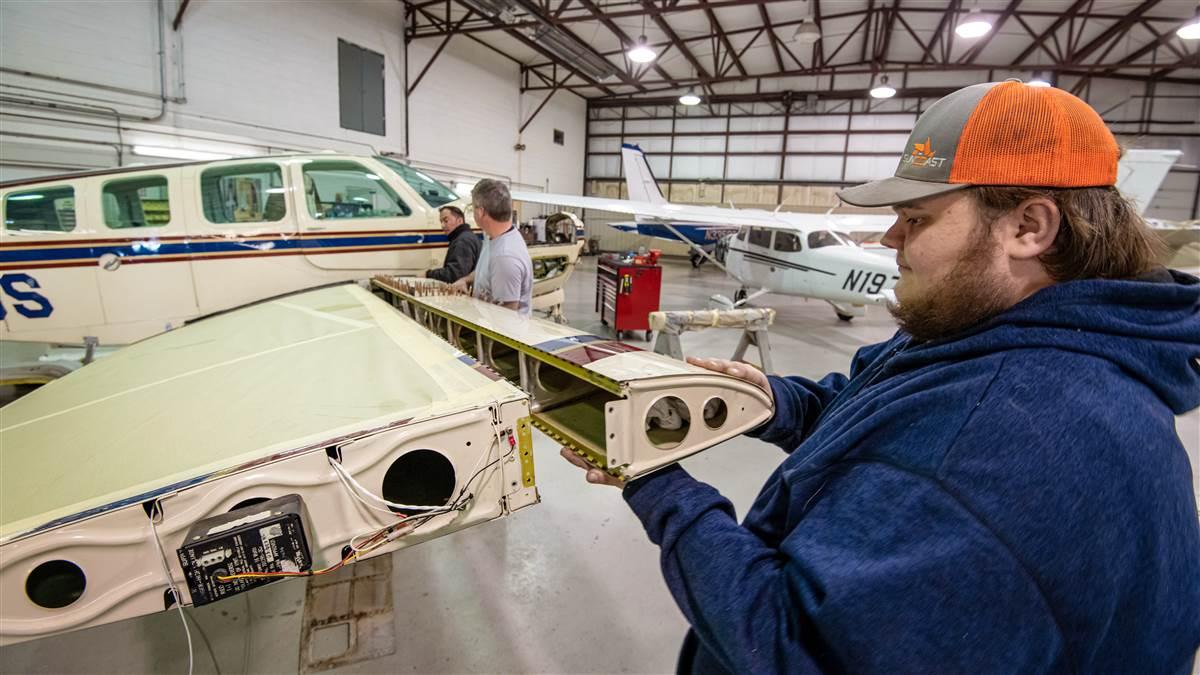 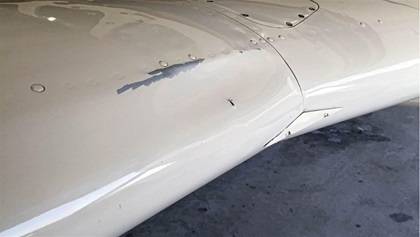 As my heart skipped a beat, I appreciated him getting right to the point about everyone being OK.

“We hit a bird. We landed OK, but there’s a dent in the wing and hole in the skin.”

He went on to explain how he and Editor at Large Dave Hirschman were flying from coastal Virginia back to home base at Frederick, Maryland, after an assignment. Air traffic control directed them to 2,000 feet msl between Washington National and Dulles International airports, an unusually low altitude for an IFR flight on that route. Typically we expect to be at about 4,000 feet through that corridor. Morningstar was flying. Hirschman from the right seat saw a dark flash just ahead of the right wing and then they felt a thump. The airplane continued to fly just fine and all the engine instruments were normal, so they continued the remaining 30 miles home. 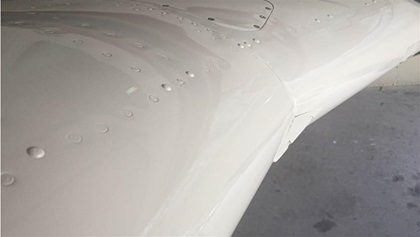 Exiting the airplane they saw copious amounts of blood and bird remains, although no feathers.

They cleaned up the mess and Morningstar gave me a call with the news. I was relieved that no one was hurt and went to the airport to check it out myself.

The critter left a fist-size dent in the leading edge of the right wing, just outboard of the Beechcraft Bonanza A36’s wing root. Something penetrated the wing skin, leaving small metal tines pointing outward, which seemed unusual. It’s as if the skin flexed enough to hit something inside that pierced the skin, forcing the remnants outward, before the skin flexed back out again, but still leaving the dent. Or something pierced the skin and then was pulled back out again.

While they did an admirable job of cleaning up the mess, I discovered a spray of blood on the bottom of the right horizontal stabilizer and elevator, and up the right side of the vertical stabilizer. While the old Bonanza had a bad day, the bird clearly had it worse.

The FAA wants to know about it

The FAA takes wildlife strike reports seriously because they can be destructive and deadly. The Miracle on the Hudson is an example of a successful ditching with no serious injuries, but with the loss of an airliner at tens of millions of dollars. The U.S. Air Force lost an E–3 Sentry airborne early warning aircraft in 1995 when it hit a flock of Canada geese near Elmendorf Air Force Base in Alaska, killing all 24 crewmembers.

The FAA Wildlife Strike Database website notes that the number of wildlife strikes and strike reports has increased dramatically in the past 30 years from about 1,800 in 1990 to more than 16,000 in 2018. Among the reasons are expanding wildlife populations, increased numbers of flights, faster and quieter aircraft, and more outreach to the aviation community to report strikes.

They encourage anyone who hits any sort of wildlife to report it to the database at wildlife.faa.gov.

So I reported the bird strike on my airplane. It’s a simple online form where they ask where and when the incident happened and for a description of the wildlife involved. In our case, there was nothing left to identify the species. But if there had been even a feather, the FAA wants to see it; the agency has a collection to compare it with in order to determine the species. And someone is paying attention. I received two follow-up emails from a person who works on the database asking for more details.

The FAA uses the data to help predict where future incidents might happen and to develop mitigation plans and to plot bird migratory routes and times. —TBH

The good news was that the repair would be covered by insurance. The USAIG insurance adjuster gave me the names of a couple of shops to call for a quote—they only needed one and the adjuster didn’t come out to look at the airplane. I just emailed photos.

One of the shops was nearby Royal Aircraft Services in Hagerstown, Maryland. They had worked on a couple of AOPA’s airplanes over the years and had a good reputation for airframe repairs. Their quote came in at an eye-opening $21,800. Expecting USAIG to balk at that number, which represents about 10 years of premium that I have paid them, I began investigating lower-cost alternatives.

All of my aviation friends had loads of alternate ideas on how to make the repair. None of them, of course, would make the airplane as pristine as it was the before the incident, and some seemed to run afoul of FAA-approved repair processes. Some thought I ought to just tap the hole shut or put an external patch on it and keep on flying.

The biggest challenge was the dent. In order to access that part of the A36’s wing the hinged leading edge must be removed. And the conventional wisdom among Bonanza experts is that in order to remove the leading edge, the wing must be removed. That can’t be done without jigs and specialized tools. If we could access the back of the dent, we might have been able to tap it out and possibly repair the hole from the inside. But no-go with the wing in place.

I called and sent photos to several auto shops that repair car dents using a variety of tools to pull the metal back out flush—so-called paintless dent repair; one auto technician even came out to look at the job, but in the end all balked at the idea of working on an airplane.

With weeks having passed, I finally submitted the quote to USAIG. They immediately gave me the green light to proceed, even agreeing to pay for the replacement of the 15-year-old fuel tank bladder. The bladder was not punctured, but it must come out to make the repair and the mechanics at Royal said older bladders almost always leak when you try to stuff them back in the wing cavity after a repair, which leads to yet another insurance claim—given the leak was a result of the repair. So at least we could skip that step and put in a new bladder right from the start.

I delivered the airplane to Royal Aircraft in late December, taking advantage of the down time to also have the engine removed and later reinstalled after major overhaul by Pinnacle Aircraft Engines (see “Ownership: How an Airplane is Like a Kitchen,” September 2020 AOPA Pilot)—even though the engine and propeller were not damaged in the bird strike.

Tom Young, an A&P/IA at Royal Aircraft, had built two tools that allow him to remove Bonanza leading edges without removing the wing—something everyone else said couldn’t be done. The tools allow him to access and remove two screws and nuts that, with all the other fasteners removed, allow the wing leading edge to be pulled forward from the spar.

With the leading edge off, he could drill out the rivets on the damaged skin panel and replace it with a new one from Textron Aviation. The good news was that the new skin was only $441 and was quickly available because the A36 is still in production. The expense of the repair was mostly in labor for removing the skin, drilling and dimpling the new skin, putting in the new rivets, replacing the hinge pins, putting in the new bladder, and painting the repaired section of wing.

The repair looks great—literally good as new. And the final bill came in about $1,000 under the quote. USAIG paid it without any hassle. Here’s to hoping I can fly it another two decades without an insurance claim. 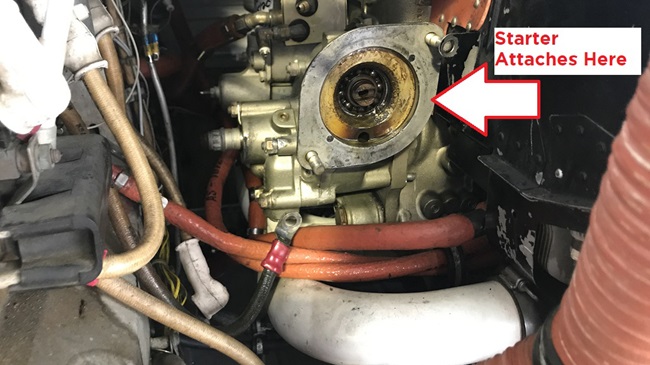 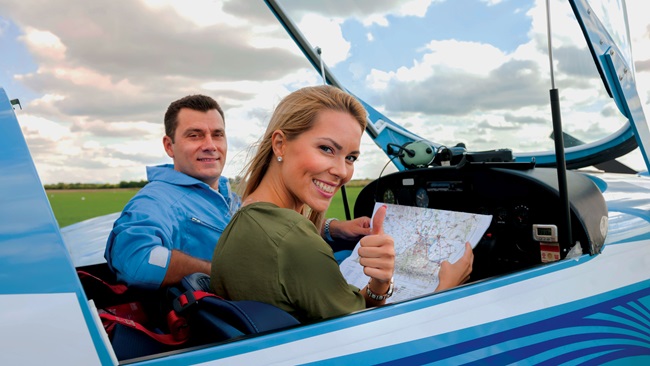 How to Get the Best Value for the Insurance Dollar