Get the app Get the app
Get the latest news on coronavirus impacts on general aviation, including what AOPA is doing to protect GA, event cancellations, advice for pilots to protect themselves, and more. Read More
Already a member? Please login below for an enhanced experience. Not a member? Join today
News & Videos Perspective: Tragic summer Sunday

A new pilot searches for meaning

On Sunday, July 5, I answered my cellphone from the backyard. Summer had finally arrived in northern Idaho, and I was enjoying a sunny afternoon under a cloudless sky. 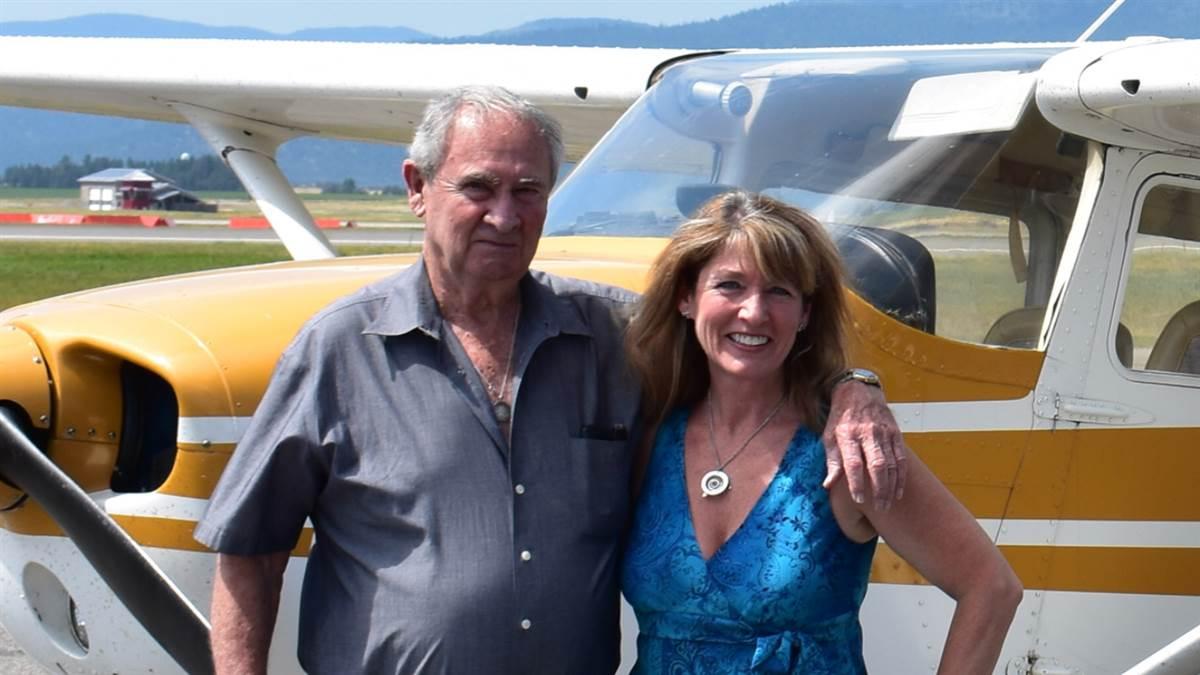 The author and her father after she took him on his first flight with her over Coeur d’Alene, Idaho.

“I am so happy to hear your voice,” my friend, Becky, said softly.

Strange, I thought. I just saw you a few days ago. I launched into the latest updates.

“Honey,” she stopped me. “I’m just glad you’re on the ground. There was an airplane crash over the lake about a half hour ago.” I was stunned.

The details of the accident unfolded over the next several hours. A midair collision over Idaho’s Coeur d’Alene Lake. Two small aircraft…one a floatplane, the other a Cessna...head on...possible survivors...no survivors. Piece by piece, the data filtered in, but there was no good news. We all hoped that there were no passengers. Two pilots, killed tragically, but doing what they loved.

In the end, eight precious lives were lost, three children and five adults. All of them were enjoying the holiday weekend from above, taking in spectacular views common to our part of the country. None were anticipating their untimely demise on a glorious summer day.

Victim identities were slow to emerge, and there was little speculation as we checked on our pilot friends. The general aviation community in the Inland Northwest is tight and supportive. We were careful not to make assumptions or start rumors. Texts, Emails, and Facebook posts helped us account for one another.

My first calls were to my parents. As a new pilot, I knew they would be frantic if they caught the story first. Having caused them plenty of worry in my life, I spared them this. I have had my private pilot certificate less than a year, and I fly over the lake whenever I have a free moment. Last August, my dad was my first passenger. We toured the lake, where I was raised, flying over the eventual site of the deadly collision. When I spoke to him about the accident that day, the sobering reality struck us both. It could have been me. It could have been us.

“I love you, Zil,” the falter in his goodbye betraying his emotion.

“I love you too, Dad.” Our sentimental acknowledgement of so many things included both heartbreak and gratitude.

When someone dies, for any reason, it is human nature to look for a way in which they are different from us. Well, he was a smoker, a daredevil, lived a risky lifestyle. She had a history of diabetes, heart disease, didn’t take care of herself. Rationalizing death gives us some reassurance that we are safe, that we are not next.

The same goes for aviation. When we hear of an accident, we want to think there was a clear chance taken, a recklessness committed. We search for a deficiency or mistake of which we are not guilty. The comfort we find there helps us carry on.

What happens when there is no fault? What do we do when an accident is just an accident?

I know the NTSB is hard at work, with a long road ahead, to determine cause, fault, or breach of protocol in this devastating case. I wouldn’t dream of speculating on that topic. I can only report what many of us are feeling in the wake of this unspeakable tragedy.

All accounts indicate both pilots in command were extremely experienced and capable. I think that is what shakes us up the most. As pilots, we figure every entry in our logbook makes us better, safer by the hour. But these men, Jay and Neil, were both airline transport pilots, both passionate and safety conscious—and yet they perished, along with six innocent passengers.

While we are somehow comforted that this might have been an unavoidable, arbitrary fluke—“big sky” theory debunked—we are also acutely aware that our pursuit can be a precarious one. There is little forgiveness in aviation, which is why we must learn from the mistakes of others. Horror stories are always upsetting, but we listen to them, analyze them, internalize them, and share them over and over. Lessons in aviation are best not learned the hard way.

In the days and weeks since the accident, we continue to try to make sense of it. Our caring aviation community has come closer together to improve safety in our area. A collective mission has emerged; to assure those eight souls were not lost in vain. Safety meetings have been arranged and procedures for class E and G airspace discussed, dissected, and clarified. A marked increase in position reporting has been observed. Nonpilot friends ask repeatedly, “How could this accident possibly happen? Why didn’t they see each other?” All pilots—even us new ones—have experienced the sense of rising concern when informed by radio or ADS-B of aircraft we can’t see out the window. We are on high alert when the airplane we know is out there cannot be located visually. It is far harder to spot traffic aloft than most people imagine, especially on a clear day, with only a small head-on profile to look for. If there is no radio report, no ADS-B alert, chances to spot one another are slimmer yet. We were all reminded of this peril on that Sunday, that we are all subject to it.

For me, a relative newcomer, getting back into my Cessna 172 was difficult, but necessary. My passenger list, which started with my dad, has grown to more than 75 friends and family, one or two at a time, and it continues to swell. An unexpected byproduct of learning to fly has been the joy of sharing it with others, and I consider it a gift to do so. I will probably never again fly over Coeur d’Alene Lake without thinking about this summer’s tragedy. I will always say a quiet prayer for the victims and their families.

It is our obligation as pilots to be current and proficient, and to learn what we can from every source. I plan to honor those lost in Coeur d’Alene on July 5, and those who died in aviation before them, by being the best pilot I can be. I know I am in good company. We have no choice but to continue to fly, but we can work harder to be even better at it. I am committed to learn, celebrate and share aviation with increased respect, passion and humility.

Something tells me Jay and Neil would have done the same.

LaDonna Beaumont is a new private pilot living in Coeur d’Alene, Idaho. She has 225 hours.