Southern Airways Inc. Flight 242 was en route from Huntsville, Alabama, to Atlanta on April 4, 1977, when it encountered a severe thunderstorm near Rome, Georgia. 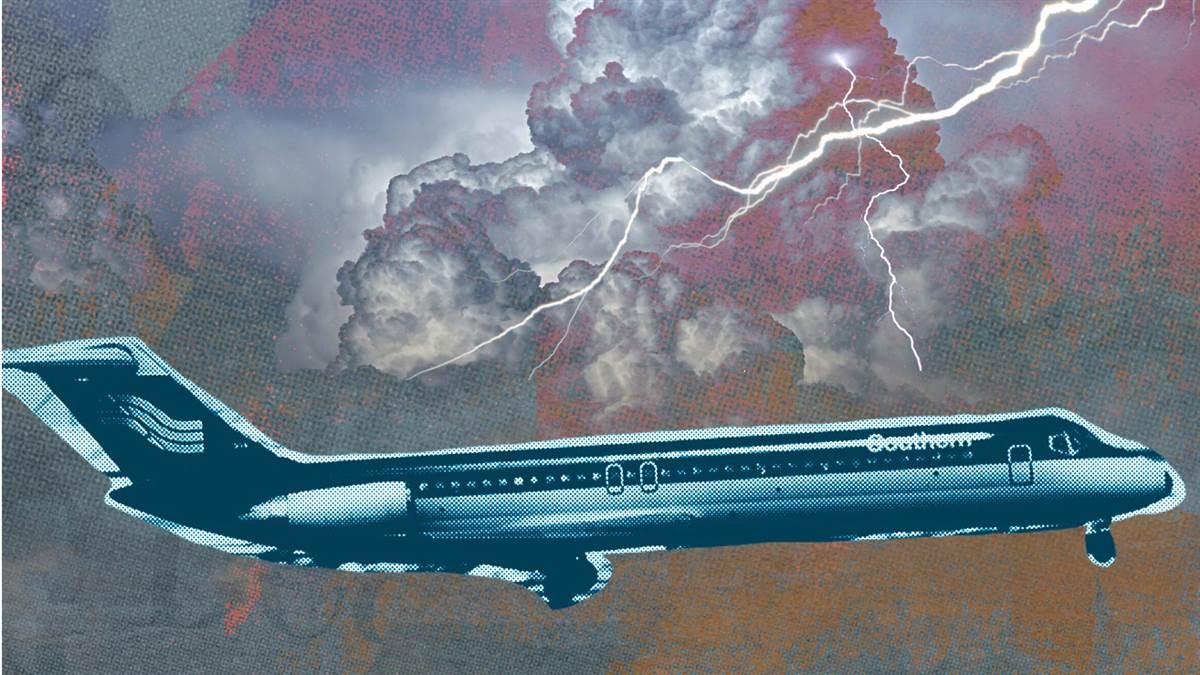 The massive amount of rain and hail in the storm was enough to snuff out both engines of the Douglas DC–9 and shatter the cockpit windscreens. During the eventual forced landing on a road in New Hope, Georgia, 72 people were killed—63 on the airplane and nine on the ground—as the airplane slid to a halt, striking multiple vehicles; utility poles; and a store/gas station, igniting a deadly fire. Twenty-two people, including the two flight attendants, survived the crash. Both pilots were killed.

Southern 242’s experienced flight crew passed through the northern Alabama/Georgia area hours earlier, on their way from Atlanta to Muscle Shoals, Alabama. On the ground in Huntsville prior to the accident leg, the captain elected to stay in the cockpit rather than go inside and get a weather update, which likely would have given him a clue of the weather that lurked to the east. Similarly, Southern’s dispatch did not provide the crew with recent severe weather information for the route. The flight took off to the southeast and expected to be in Atlanta just 25 minutes later.

Weather radar in the DC–9 was an X-band type designed in the 1960s, notorious for attenuation—also known as radar shadowing. It was especially susceptible to attenuation if the radome became sheathed in rain or ice. Attenuation occurs when the radar’s energy is absorbed by the precipitation ahead and not returned to the unit to depict a hazard. In other words, it shows a clear path when, in fact, it’s the worst part of the storm. This appears to be what lulled the crew of Flight 242 to make a left turn into the heaviest precipitation. 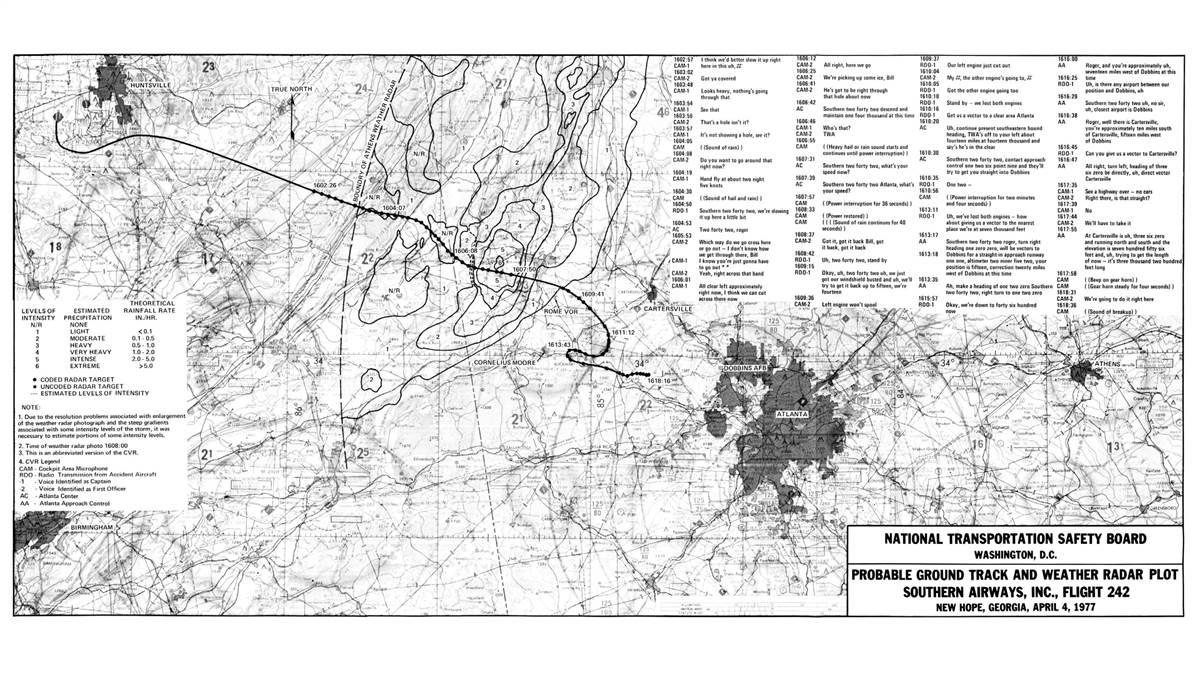 “Which way do we go, cross here or go out—I don’t know how we get through there,” says the first officer. From the conversation on the cockpit voice recorder (CVR) we can tell that the captain and first officer are relying on the weather radar and discussing options based on radar depiction. A few seconds later, the captain states, “all clear left approximately right now, I think we can cut across there now.” About 45 seconds later, the sound of hail and rain gets picked up by the CVR and lasts until a power interruption that occurs because the generators kick offline as the engines spool down from water and hail ingestion.

During the 36 seconds of CVR interruption we can assume the cockpit has descended into chaos as Southern 242 enters the worst part of the storm (see p. T-13). Once the electrical power comes back on, the captain transmits to ATC, “We, uh, just got our windshield busted.” The outer panes of the windows have cracked but the inner panes held together, which would create visibility issues but help maintain what was left of the cabin pressure (supplied by the engines) and shield the crew from the elements.

“Both engines’ high-pressure compressors began to stall severely,” the NTSB report notes. “High thrust settings [set by the crew in response to failing thrust] following the severe damage to the high-pressure compressors probably caused severe overheating in the turbine sections of both engines, and the engines ceased to function.” In the following minute, both engines spool down and the captain asks ATC for a vector to a clear area. ATC suggests Dobbins Air Force Base. During the readback, electrical power and CVR operation are interrupted again, for more than two minutes. (The flight was using Com 2 for ATC communication, which is not powered during a dual generator failure.)

During this time of no recorded communications, the radar track shows the DC–9 turning westward. Was Southern 242 circling to land at Cornelius Moore Airport (now Polk County Airport–Cornelius Moore Field) in Cedartown, Georgia? By the time the auxiliary power unit is started and electrical power restored, the DC–9 is at 7,000 feet and only four minutes from crashing.

Soon after power restoration, the CVR picks up the first officer saying, “get us a vector to Dobbins.” If there was a discussion of going to Moore Field during the generator loss, it appears that it was overruled. Too bad, as Moore likely was within gliding range of the DC–9. In the heat of battle the crew probably was unaware that Moore was now ahead of them, so the reason for the turn to the west is a bit of a mystery.

“Uh, we’ve lost both engines—how about giving us a vector to the nearest place. We’re at 7,000 feet,” the captain asks ATC. Moore Field is not offered as an option, perhaps because it is just outside the range of the controller’s radar scope. Besides, Dobbins was agreeable to the pilots earlier, so maybe the controller thought to just stick with the plan.

While the situation is dire and the transponder is set to the emergency squawk code, nobody has officially declared an emergency. The first officer told the captain to declare an emergency but it was never transmitted to ATC. The controller is working multiple aircraft and his attention is divided among all of them. Typically, in a situation as dire as this, the emergency flight would have a dedicated frequency to itself. ATC issues a vector back to the southeast and the airplane reverses course.

The captain tells ATC, “All right, listen, we’ve lost both engines, and, uh, I can’t, uh, tell you the implications of this uh, only got two engines and how far is Dobbins now?” ATC reports the flight is 19 miles from Dobbins.

A minute and a half later, ATC asks, “Southern 242, do you have one engine running now?”

“Negative, no engines,” reports the captain. At this point, the crew begins to realize that Dobbins is too far and they can’t restart the engines. The captain asks for a closer airport and is given Cartersville as an option, which is 10 miles north. Realizing they are quickly running out of options, the first officer states, “Bill, you’ve got to find me a highway.” This portion of Georgia is hilly and forested and perhaps that sight has the FO considering a highway.

Realizing airports are no longer an option, the captain tells ATC, “Uh we’re putting it on the highway, we’re down to nothing.” Thirty seconds later, the airplane crashes onto the Georgia State Route 92 Spur (today the Dallas-Acworth Highway), leaving a 1,900-foot path of destruction.

As in all accidents, a chain of occurrences led to this disaster. One thing mentioned in the report is fatigue. The crew of Southern 242 had a minimum rest layover (eight hours) the night prior to the accident. The crew had been on duty for nine hours when the airplane crashed at 1619. Southern ran a high-cycle, short-segment operation and that kind of flying can be fatiguing.

Was it fatigue that kept the captain from getting out of his seat to get an updated look at the weather during the stop in Huntsville? Was he too tired to care? After all, the weather was benign when they transited the area a few hours earlier. Perhaps he assumed that if the weather was bad, the dispatcher would tell him. In flight, the captain initially showed hesitance about going through the weather, followed by a reversal of that decision. The pilots were trained in the limitations of the X-band weather radar, yet relied heavily on it to transit the storm system.

It also appears that the pilots were so fixated on getting an engine running that preparing for a forced landing was back-burnered until it was too late. From 14,000 feet, a DC–9 could glide 34 miles in about 11 minutes. Within that range there were a few airports, albeit small ones, and presumably some open fields more conducive to a survivable forced landing than where they ended up. In the days before GPS and moving map displays, finding a small airport on a chart, cross-checking your position, and navigating to it was more of a chore than today. The first officer had his hands full flying a DC–9 in a completely foreign condition while the captain was focused on reestablishing electrical power, restarting at least one engine, and simultaneously trying to find somewhere to go.

The flight crew, dispatcher, and ATC all were fingered by the NTSB for their roles in the crash. The captain should have sought out updated weather during the stop in Huntsville and the dispatcher, similarly, should have transmitted critical severe weather alerts and sigmets to the crew. The last weather update the crew received was during the previous stop in Muscle Shoals, Alabama.

ATC radar of the day was not designed to depict precipitation. In fact, precipitation was purposefully suppressed to allow a controller to better see aircraft rather than precipitation. This particular controller was also busy working multiple targets. This was not helped by the crew’s failure to declare an emergency, which would have stressed the seriousness of the situation that required focused attention from ATC.

This accident resulted in many recommendations and eventual changes that affected aviation—among them, better pilot training on airborne weather radar’s limitations and attenuation awareness. Thankfully, technology in today’s airborne weather radar systems is far superior to the old X-band units like that on Southern’s DC–9. No more do we have to keep the radome free of precipitation to get an accurate picture of the weather. It’s not that the signal gets attenuated by precip on the radome, it’s the attenuation of the signal by heavy precip—so much so that the signal is absorbed/not returned to the antenna—which results in a display that underestimates the intensity.

The accident led to the creation of color weather radar displays for airplanes and the establishment of a nationwide network of weather radars. Dissemination of weather alerts via ATC or via voice over navaids soon provided pilots better awareness of weather, especially during rapidly changing conditions.

The pilots put the airplane in a very undesirable state by penetrating a severe storm. But they dealt with a number of unprecedented failures for which they had no training, and they guided the flight to a survivable forced landing. There’s no question that if the crew had stalled the airplane, for example, there would have been no survivors at all. This accident illustrates the old adage of using superior judgment to avoid a situation in which you have to use superior piloting skills—to salvage a mess of your own making

The author would like to thank SA242 survivor Frederick Clemens for his assistance with this article. The NTSB chart below shows the flight path and CVR transcript excerpts.