'To the stars and through difficulties'

The view from above Greensburg, Kansas, reveals a larger number of solar panels on rooftops than you would expect in this small southwest Kansas community, along with a dotting of wind turbines and residential and business structures that all look to be no more than a dozen years old. 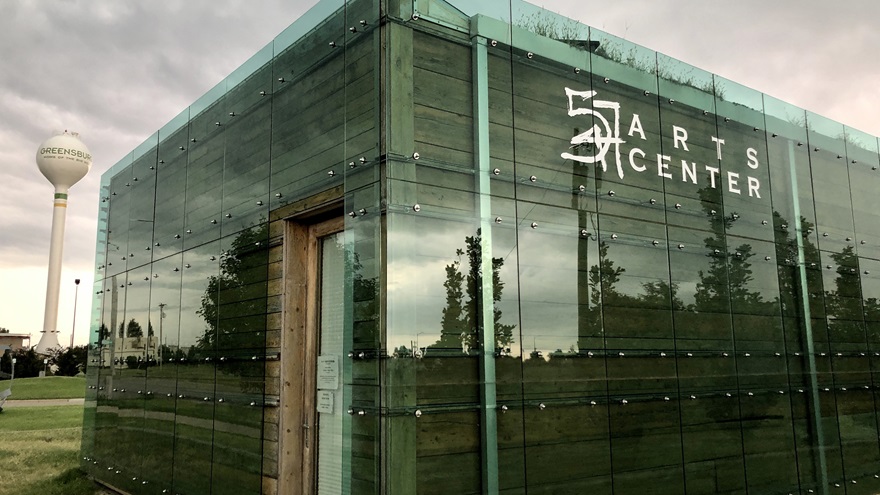 The 5.4.7 Arts Center is named after the date (May 4, 2007) of the EF-5 tornado that devastated Greensburg. The center was the first LEED Platinum building in Kansas and uses wind and solar power. It is an important regional resource for contemporary art in southwestern Kansas, offering residents and visitors a place to create and learn through exhibits, performances, and classes. Photo by MeLinda Schnyder.

The aerial view of this rural town, about 110 miles west of Wichita, was starkly different in the spring of 2007 when President George W. Bush’s helicopter flew in to survey the area: flattened homes and commercial buildings, destroyed vehicles, piles of rubble, and wrecked trees.

For decades, Greensburg had been known as the home of the world’s largest hand-dug well, an impressive yet obscure piece of history that town officials used to spark tourism to this community of about 1,500 residents. Since May 4, 2007, Greensburg has been known as the community “rebuilding stronger, better, and greener” after a tornado wider than the town itself and with the highest possible strength rating destroyed or heavily damaged 95 percent of the town’s infrastructure.

Not rebuilding was not an option, city officials said, and since they had to build from the ground up, they quickly decided to do so in a way that would make Greensburg a model green town through community and building design and construction that minimizes negative environmental impacts by encouraging resource conservation, recycling, and reuse. Beyond playing off Greensburg’s name (it was named for pioneer Cannonball Green who was instrumental in developing the town in 1886), they hoped this would attract companies that could offer green-collar jobs, which would also bring more residents. Not all families displaced until homes and the school could be rebuilt had returned.

Among the LEED-certified structures Greensburg has built in the past 13 years using government grants and private funds are a K-12 school, county hospital, city hall, arts center, and John Deere dealership. Environmental activist and actor Leonardo DiCaprio chronicled the first few years of rebuilding in his docuseries Greensburg on Discovery’s Planet Green channel.

The city has not attracted as many businesses as hoped, though officials say it is repopulating at a sustainable rate. It has returned to nearly 1,000 residents after dropping from 1,500 to fewer than 800 after the tornado. A business park opened in 2009 at the site of the former airport, and in 2019, the first phase of the new Greensburg Municipal Airport opened with a 3,200-foot turf runway and an aircraft parking area with tiedowns. The city is working on funding the next phase: paving the runway and expanding it to 4,000 feet with turnarounds, a taxiway, and a terminal building. 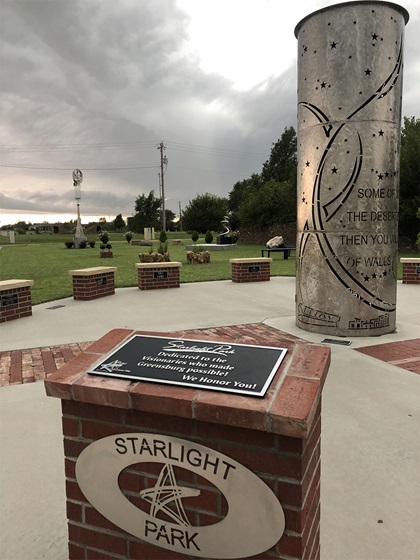 Fly in to the airport to see a re-created classic rural America town. Contact the Big Well Museum and Visitor Information Center to make arrangements for a ride from the airport, two miles northwest of town. Once in Greensburg, you’re within walking distance to the restaurants, shops, hotels, and most attractions.

There are two hotels in town, including the Best Western Plus Night Watchman Inn & Suites, where you’ll notice the on-site wind turbine. Locally owned restaurants range from a pizzeria to a fresh meat market serving deli sandwiches, steak dinners, and homemade pie, as well as several bars and grills.

Don’t skip a drink or ice cream at the restored soda fountain inside the Kiowa County Commons building. Besides classic fountain creations, they have the EF-5 Challenge: Eat a sundae made with 15 scoops of ice cream and 10 toppings within 30 minutes for bragging rights and fun prizes.

The soda fountain is considered the living history part of the Kiowa County Historical Museum. Displays and artifacts coveri Native American history in the area, founders and pioneers, farming including the Fromme-Birney Round Barn (you’ll need a car if you want to travel to nearby Mullinville to see the restored 1912 barn, which is on the National Register of Historic Places for its architectural significance), and the development of the towns of Kiowa County.

The museum has an exhibit on the 2007 tornado, but you should also visit the Big Well Museum and Visitor Information Center, which covers three main topics: the preserved well and the story behind it, the tornado, and the rebuilding of Greensburg.

The well was dug from 1887 to 1888 by men using hand tools like picks, shovels, and a pulley and rope with half a barrel to haul up dirt. It was the town’s main water source until 1932; it became a tourist attraction in 1939 and museum officials say more than 3 million visitors have viewed it. The well survived the tornado but the modest visitor area around it did not.

The new multilevel museum opened in 2012 with a more elaborate visitor experience. You can descend a spiral staircase about 60 feet into the 109-foot-deep-by-32-foot-wide well and climb up to a second level with an overlook of the town. Labels on the glass point out the few buildings that survived the twister and information on new buildings, including the 5.4.7 Arts Center directly across the street.

Other attractions within walking distance include the Twilight Theatre and Starlight Park, and one mile from the center of town is the nine-hole Cannonball Golf Course.

Maps for self-guided tours highlighting key places in town are available at the Big Well Museum and Visitor Information Center. The museum also has a few bicycles free to use if you’d like to pedal and tour.

As you explore, be sure to notice several places you’ll see “ad astra per aspera,” a Latin phrase meaning “to the stars through difficulties.” Perhaps nowhere is the Kansas state motto more visible—literally and figuratively—than Greensburg.