Get the app Get the app
Already a member? Please login below for an enhanced experience. Not a member? Join today
News & Media Meet Laura Humphries, aka 'The Flying Princess'

As children, we go through many stages of deciding what we want to become when we grow up. For many, the options become endless simply because of who we see succeeding in a certain role. 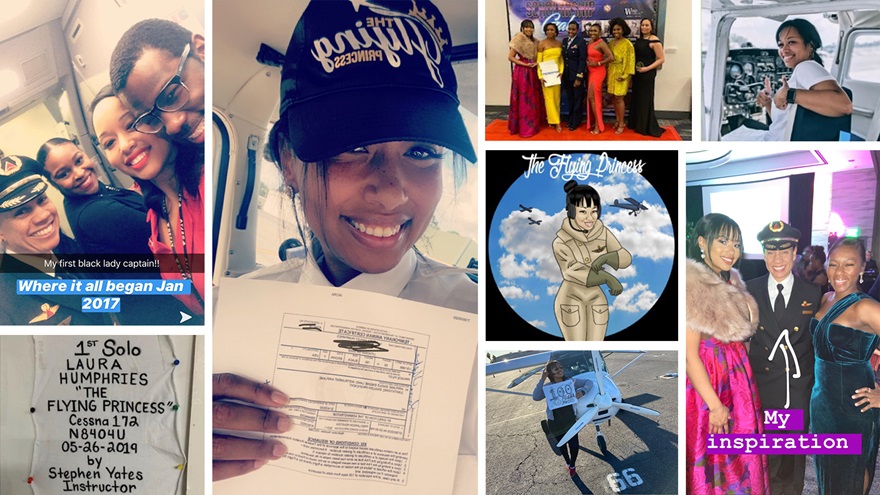 While working as a flight attendant, Laura Humphries saw a Black female airline captain working the same flight. That’s all it took for Humphries, known as “The Flying Princess” to her friends and social media followers, to know that she could one day sit in that same seat.

And she knows that dream is not unique to her. Humphries hopes to change the trajectory for the next generation of pilots as she continues her journey to become an airline captain.

While continuing her work as a flight attendant, she has earned her private pilot certificate and instrument rating along with advanced ground and instrument ground instructor certificates, and is also a certificated remote pilot. Humphries was also the recipient of a scholarship from the national aviation organization Sisters of the Skies to help with her training and advanced ratings. And she is writing a series of books and documenting her journey toward 1,500 hours through a blog and social media to inspire more pilots who look like her to follow their aviation dreams.

For others, especially young Black girls aspiring to become commercial airline pilots, the path to aviation might not always be simple. Only 7 percent of U.S. pilots are female and less than one-half of 1 percent of professional pilots are Black and female. In their lifetime, many minorities, especially females, might never see an airline captain who looks like them. Seeing someone in such a position might help them realize—early on—that it’s something they can achieve.

AOPA touched base with Humphries to find out about her journey and why she believes representation is important in any industry.

What led you to get involved in aviation?

Many individuals from a young age know the career path they will embark on. However, for me, my journey has been unorthodox, to say the least. As a child I wasn’t exposed to pilots or flight attendants. The aviation world was nonexistent in my eyes, and I never knew how passionate I’d be about becoming a pilot. I have always challenged societal norms, and there is no surprise that I am pushing the envelope by becoming an African American female pilot. My first taste of the aviation world was my job as a flight attendant. This was my steppingstone to entering the flight deck. About two years in as a flight attendant I took interest in becoming a pilot. I knew it was possible, but it was still discouraging never having seen a Black female pilot. One day my life changed forever. I went to work and couldn’t believe my eyes. There was a Black female captain preparing to take flight. At that moment, I could see myself in the captain’s seat. It was such a monumental moment for me. I remember having so much energy and feeling so empowered that it encouraged me to research every avenue for flight training. And now, I am actively pursuing something I love.

What is your favorite thing about aviation?

The camaraderie. Everyone in aviation has the same sparkle in their eyes. A sparkle that’s filled with love, passion, and a personal journey dying to be discussed and shared among each other. It’s an immediate sense of understanding that we all yearn for and receive in the aviation world.

Did you have any fears before entering the world of aviation, and if so, what were they?

If there was any fear or something holding me back, it was the lack of representation. My whole journey has been centered around representation. When I decided to become a flight attendant, it was because I saw a young Black female flight attendant that ultimately showed me I could do it too. When I finally decided to become a pilot, it’s because I saw a Black female captain. Seeing someone who looked like me took away any fear that it wasn’t possible.

How did the moniker ‘The Flying Princess’ come about?

Growing up I’ve always been called a princess. It’s how I always introduce myself “Princess Laura.” Or, I’d say, “My name is Laura but feel free to call me Princess.” Anyone who knows me, knows I’m super silly and goofy. For me it’s more like a joke or an ice breaker. When I started training to earn my private pilot certificate, my instructor, Stephen Yates, loved calling me Princess. We were the perfect student/teacher match. After my first solo, he cut out the back of my shirt to write on it and hang it on the wall at the school. When I saw it, it said “The Flying Princess!” I cried because it was so perfect and so fitting! I asked him how he came up with it? He said, “Because Laura, you’re my Flying Princess!” Tears were flowing! Since that moment, I said that will be my name on my pilot journey.

What is your ultimate goal in aviation?

My first goal is to help inspire and expose our youth and especially young girls to the amazing career fields where we have the least representation in, like aviation. I truly believe our time on this Earth should be to evoke change and making it easier for the next generation. Eradicating stereotypes and gender biases will ultimately help promote equality and dismantle discrimination. My second goal is to become a captain for Delta Air Lines.

What inspired you to write ‘You Look Like Me’? And where can people buy your book?

Once I decided I wanted to be a pilot, I was immediately disappointed that I didn’t know I wanted to become one sooner. If I had known I could have been happier sooner, or if I even knew this was something I would enjoy, I would have begun my aviation journey a long time ago. With my frustration came the idea to create a children’s book that emphasizes different career choices where women are thriving. I don’t think unusual careers are talked about or experienced in our school systems. You always hear about becoming a doctor, teacher, lawyer, or nurse, but there’s so much more out there. I want my books to touch as many students as possible to get the conversation started and spark the idea of other career fields available to young girls who look like me. Seeing is believing. I’m just trying to give the next generation the head start I wish I had, while also coming up with creative ways to help sponsor my pilot journey. The Flying Princess is the first book in a series and it’s my story. If you’re interested in purchasing and supporting my first book venture, you can go to www.youlooklikemebooks.com.

Diversity among any career field is extremely important. If you want the best of the best, you can’t have limitations to any one gender or race. There’s a severe lack of diversity in aviation for many reasons. One reason is that there’s a certain look associated with being a pilot and it has been that way for many years. Many of us are in the process of breaking that stigma, but it can also be discouraging and daunting not seeing diverse representation in the aviation field. Some people grow up knowing they want to be a pilot, but there are many people like me who needed to see someone who looked like them to even consider taking that leap. Another huge reason is the cost of flying. It’s so expensive, that it makes it seem like only a certain demographic can really achieve this dream. But, it’s just as costly as getting an undergraduate or master’s degree. In order to bridge this gap, we have to push the narrative that this is possible. And it can be done. Sometimes we just have to show people how to do it.

Do you have anyone who inspires you?

Many people inspire me! There are so many talented and creative people in aviation. Being extremely new to the aviation world with no real background in it, I’m easily inspired and I’m often in awe. My inspiration comes from everyone who is pushing through any obstacles or setbacks and making their dreams come true, with no excuses. The people who are selfless and are helping people up on their way up. The people creating their own lane and breaking barriers! Everyone’s journey is going to be different and it’s not always about where you end up, but the integrity and character that was displayed on your way there. My friends that are on the same path inspire me and encourage me daily.

How do you feel you inspire others?

I think I inspire others by being my authentic self and sharing my journey with others. Being a woman in a male-dominated field is major to me. I understand the impact it can have for other women, so I choose to put myself out there and show it can be done. I know I can be a beacon of hope for more than just my immediate family, so I made the choice to be vocal about my journey. I’m usually private about my moves until I’ve made them, but the struggle is what most people can connect with, not the illusion of it falling in your lap or seeming easy. I started a blog for this reason so I can talk about my doubts or my moments leading up to my wins. It has been hard work and dedication, but strength is what you overcome, not what is handed to you.

Senior Manager of Media Relations and Public Affairs
AOPA Senior Manager of Media Relations and Public Affairs, Jennifer Non joined AOPA in 2017. A former traffic reporter turned media relations specialist, and native Washingtonian, she enjoys traveling and is working toward her private pilot certificate. She was recently honored by Ragan Communications and PR Daily with a Top Women in Communications Award, in the Diversity, Equity & Inclusion Champion category and is also a member of the Board of Nominations for the National Aviation Hall of Fame.
Go to Jennifer Non's Profile
Topics: People, Student, Career