Get the app Get the app
Get the latest news on coronavirus impacts on general aviation, including what AOPA is doing to protect GA, event cancellations, advice for pilots to protect themselves, and more. Read More
Already a member? Please login below for an enhanced experience. Not a member? Join today
News & Videos Destinations: Flying the Texas Hill Country

A colorful world where you might least expect it

Editor's note: The print version of this story incorrectly described the location of King Ranch and the fighters who died at the Alamo. AOPA regrets the errors.
It’s supposed to be flat and brown and have a rattlesnake around every rock. Tumbleweeds; cacti; a dry, thirsty world. Flat landscape as far as the eye can see, dusty lanes of road, and not a fleck of green. Texas heat. Texas dust. Texas mud. 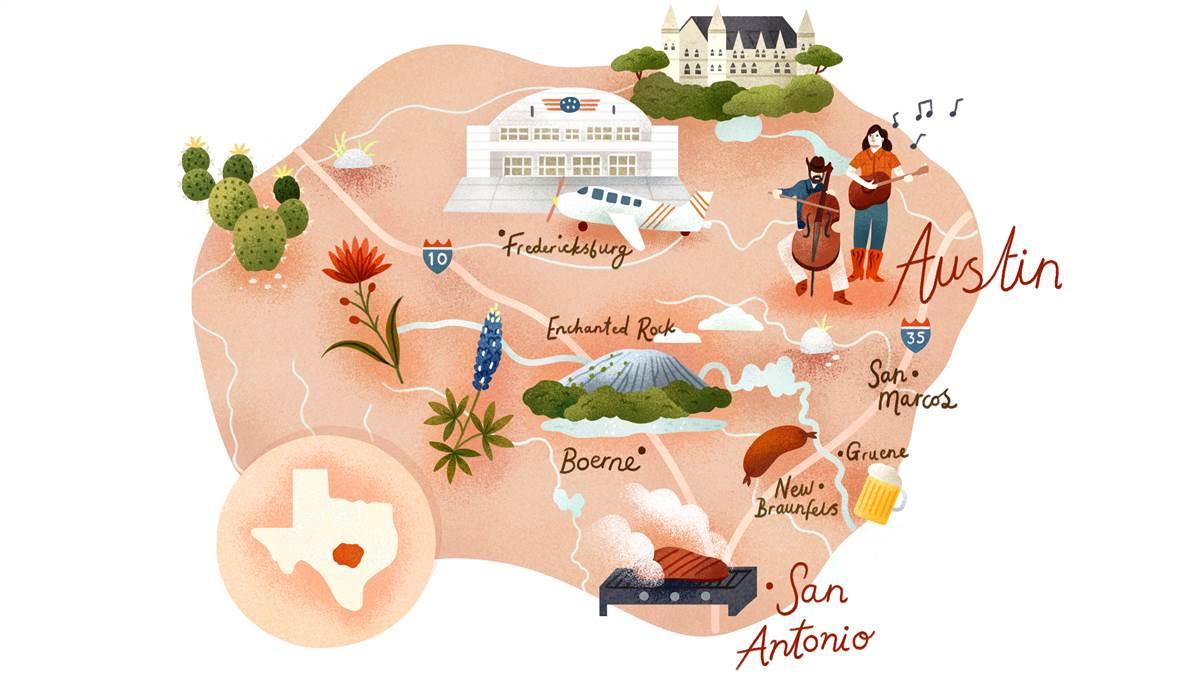 So, what’s this view from 1,200 feet? Fields of blue, vistas of green, rocky outcroppings, pools of tranquil water. Cobalt wildflower fields as far as the eye can see. In Texas Hill Country in the spring, Texas isn’t brown, it’s blue. Bluebonnets have been the state flower of Texas since 1901. These wildflowers spread across the landscape, creating blankets of blue best seen from a general aviation aircraft.

“It’s so blue, it looks like you are flying over water,” said Tres Clinton, a flight school owner in Burnet. “I took a guy in the Super Cub with the doors off over this big area of bluebonnets and we could smell the flowers. It was almost emotional, it was so beautiful. I saw the guy later and he told me again it was the best flight of his life.”

Flying the Texas Hill Country—an area of south-central Texas defined as “the border of the American Southeast and American Southwest” by tourism guides—is a surprise. Because of the region’s karst topography—terrain formed by abundant rain that dissolved the bedrock—the Hill Country is a maze of sinkholes, limestone canyons, and granite domes. At 400 feet tall, Enchanted Rock near Fredericksburg is the second largest granite dome in the United States (Georgia’s Stone Mountain is taller). It’s pink!

“The Hill Country is best enjoyed low and slow from the air,” said local pilot and Piper Comanche owner Clayton Corn. “You get much above 1,500 feet and things flatten out.” 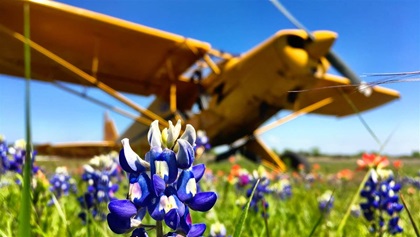 “My favorite flight is to San Antonio,” said local pilot George Farris. “Either fly into historic Stinson with its ton of history or fly into San Antonio International. Stinson is almost like visiting a museum with its art deco decor and wealth of historic photos on the walls. They also have a pretty good barbecue on the field called Bob’s. If you tell the tower you are going to visit the museum, they will let you taxi right on over. At San Antonio International, you can use the FBO’s car and drive downtown to River Walk and enjoy any one of the many good restaurants. We plan our trip so that we can go to the renovated Tower of the Americas, arriving at sunset.” 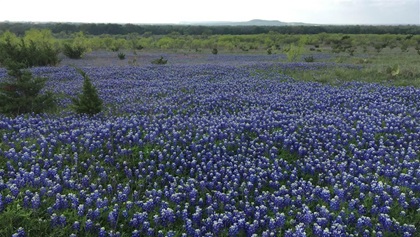 San Marcos’ Hays County Courthouse, built in 1908, is one of the many distinctive buildings that distinguish the individual towns of Texas. Each town in the state has its own unique architecture, and San Marcos is no different. It’s about 30 miles south of Austin (or 50 miles northeast of San Antonio). The classical revival courthouse building—adorned with the statue of justice on top (she once fell all the way through the glass cupola down to the basement; the cupola isn’t glass anymore)—is at the heart of the town square. Shops, restaurants, and other businesses surround the courthouse, and are accessible by raised sidewalks. Tie-downs for horses and carriages can still be found on the streets. You’ll find unique restaurants such as The Blue Dahlia, great saloons such as the Taproom, and funky bars like the I Don’t Know. Dine and overlook the square from the Veranda, the Rooftop on the Square, or Shade, and listen to the music from Black Rabbit, Harper’s, or The Porch. San Marcos has a fun personality that is deeply rooted in its rich historic culture. San Marcos Regional Airport (HYI) was the site of AOPA’s first regional fly-in in 2014 and was slated to be its first in 2020 but was canceled because of the COVID-19 pandemic.

Fredericksburg is usually first on the minds of pilots flying in the Hill Country area. That’s because Gillespie County Airport (T82) famously celebrates general aviation with its on-airport Hangar Hotel (see “Fly-Outs: Hangar Hotel,” April 2011 AOPA Pilot) and welcoming Airport Diner. Both feature the ambiance of the 1940s, with World War II memorabilia, model airplanes, and other period decorations. Also in Fredericksburg is the 55,000-square-foot National Museum of the Pacific War, the only museum in the country dedicated to World War II in the Pacific Theater. U.S. Navy Fleet Adm. Chester Nimitz was born and raised in Fredericksburg. Here is the home of what is known as “Texas German,” a dialect that originated here because of the great concentration of German immigrants; Fredericksburg is named for Prince Frederick of Prussia. 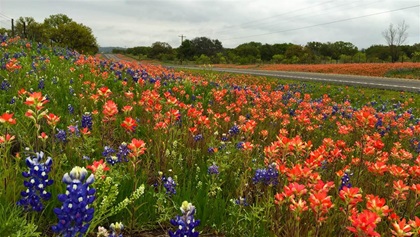 Many of the smaller Texas Hill Country towns are steeped in German history and culture. Towns such as New Braunfels, Gruene, Boerne, and Luckenbach retain their German heritage. These little towns are situated along the Guadalupe River so nature activities such as hiking, fly fishing, and floating on the river are popular. Music is also a big draw. Gruene (pronounced green) has Texas’ oldest dance hall, where legends such as George Strait and Willie Nelson play, as well as many Texas Country and Red Dirt musicians. There is live music every day of the year. Gruene is charming with its little stores such as Cotton Eyed Joe’s and The Great Texas Pecan Candy Co., a general store with soda fountain and penny candy, and the massive Gristmill Restaurant that features Texas-style dining. Speaking of Willie Nelson, yes, that’s the Luckenbach he and Waylon Jennings sing about—“every state has a Luckenbach; a place to get away from things,” Jennings has said of the song. There is a small dance hall here, too.

Texas Hill Country flying is good most any time of the year although summer brings heat, rain, wind, and thunderstorms as big as the state (hailstones and 50-plus-mph winds) and November and December can be foggy. But April is wildflower season, May is beautifully green. “October is the best time to fly,” said Clinton. “Everything is at its peak and the air is smooth, perfect weather—65 to 70 degrees—and the sky is clear.”

Clinton’s favorite field is Llano Municipal Airport (AQO), which in addition to its 4,200-foot-long asphalt runway features a long, wide grass strip near Lake LBJ (named for the thirty-sixth president of the United States, who was born in nearby Stonewall) and the Llano River. Clinton likes the grass strip because it’s so wide (a little more than 300 feet) and says it’s “very forgiving and flat and the folks are really nice.” At Llano is Cooper’s Old Time Pit BBQ. There’s a Chevy Suburban waiting at the Llano airport to take you over to Cooper’s. You order your food by the meat and weight at the smoker and go inside to have it sliced, pick your side dishes, and pay.

When Clinton takes customers on sightseeing flights he likes to take them over Falkenstein Castle, a replica of the Bavarian castle of King Ludwig, which a local couple built in 1996 on a hill near his home airport at Burnet (Burnet Municipal Kate Craddock Field—BMQ); Packsaddle Mountain, the site of the last “cowboy and Indian battle,” he says, and to peer down on a silver mine shaft; and head southwest to Red Sands Ranch (1SX4), a private 3,000-foot-strip at a resort on the Llano River. It’s a corporate retreat with a steep price tag, but there is also camping nearby.

Other towns and airports local pilots mention are Kerrville, home of Mooney Aircraft (ERV); Sonora Municipal Airport (SOA) with its nearby Sonora Caverns; Fort Clark Springs (74TX); the exclusive 13,000-acre JL Bar Ranch (9TE2); and Horseshoe Bay Resort Airport (DZB) at the Horseshoe Bay Resort on Lake LBJ is one of the largest private airstrips in the United States at nearly 6,000 feet.

Finally, let’s not forget Jacob Brodbeck. Texas history says he may have beaten Orville and Wilbur Wright 40 years before their time. The Fredericksburg teacher built an “air-ship” in 1863. One account claims he achieved flight on September 20, 1865, with the aircraft rising 12 feet off the ground and “flying” approximately 100 feet before crash landing. He died on his ranch in Luckenbach in 1910. His bronze memorial is in the town square in Fredericksburg. 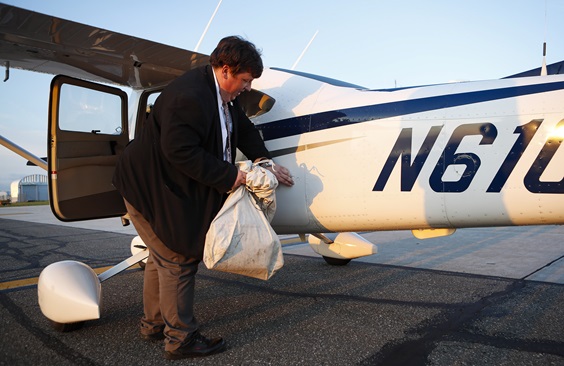