Get the app Get the app
News & Media Mentor Matters: All engines out! 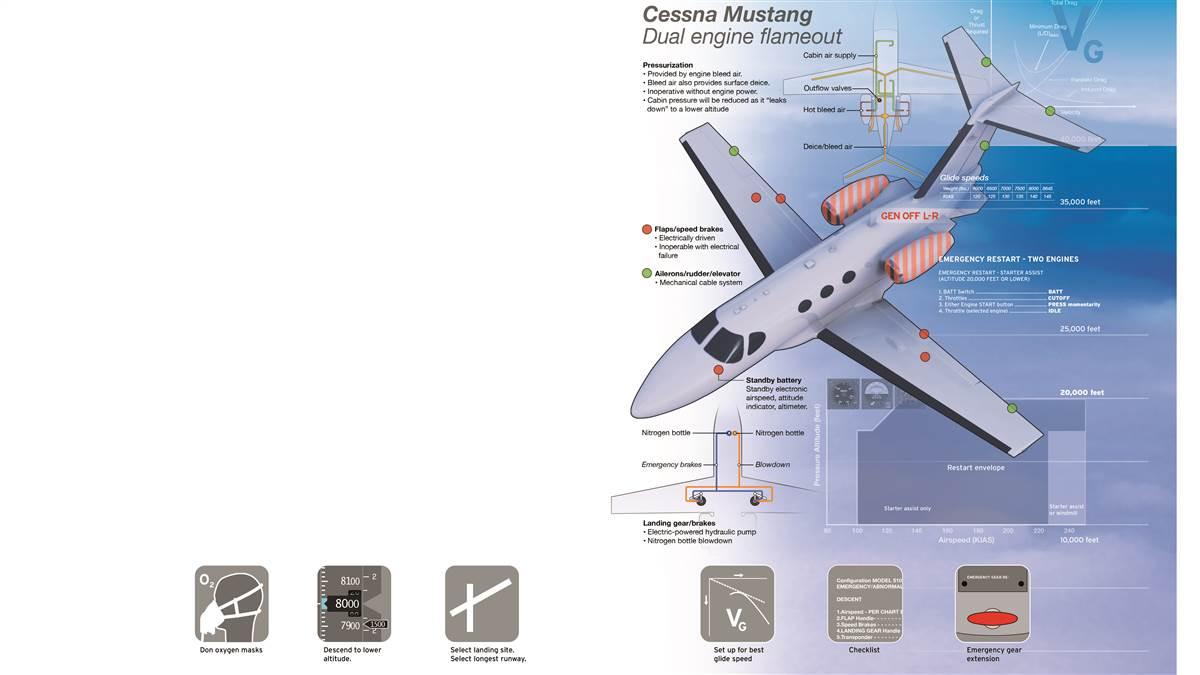 Click on image to enlarge.
Illustration by Charles Floyd

A little over a decade earlier, a two-year period saw three Beechjet 400s experience dual engine flameouts, thought to have been caused by high-altitude engine icing. Dozens of airline accidents such as the “miracle on the Hudson” of US Airways 1549, or Air Transat 236 successfully gliding to a landing in the Azores, have shown that even the most careful operations of transport category jets cannot completely eliminate the risk of losing all thrust in flight.

All-engine flameouts have historically happened for a variety of causes. In addition to fuel contamination and icing, convective weather, volcanic ash ingestion, bird strikes, pilot mishandling of system failures, and simple fuel exhaustion all have led to gliding flight in jets. Fortunately, history has demonstrated that if the pilot in command maintains a cool head, a safe outcome with zero fatalities can, perhaps surprisingly often, be achieved.

Important to remember is that the loss of all engines in a light jet will fundamentally change the operation of the aircraft beyond simply the loss of thrust because of the concomitant loss of all bleed air, electrical power generation, and hydraulic power.

When the engines fail above 15,000 feet, the first concern is that a loss of both engines will result in an immediate rise in cabin altitude as leaks in the pressure vessel allow the (now not replaced) cabin air out. Fortunately, this is not likely to occur at a rate that makes the depressurization hazardous if the pilot immediately dons his or her oxygen mask. Passengers, however, provide an added twist. The “dixie cup” type masks in jet passenger compartments can’t provide protection from hypoxia above a cabin altitude of 25,000 feet, so the pilot may be faced with an undesirable necessity: making a rapid descent from a high altitude to 25,000 feet to ensure the passengers’ safety. But doing that means giving up valuable time and gliding distance.

Fortunately, history has demonstrated that if the pilot in command maintains a cool head, a safe outcome with zero fatalities can, perhaps surprisingly often, be achieved.After immediate physiological concerns are addressed, the loss of electrical power will cause another set of problems. Some light jets automatically load-shed electrical items the manufacturer deems nonessential when both generators are lost. Others require the pilot to select an emergency position of the battery switch. In either case, the pilot will now be functioning with a dramatically reduced set of equipment, not just the immediately obvious (loss of the autopilot and most or all the primary display screens) but in less visible and equally critical matters. Electric trim, for example, may be completely inoperative or reduced to a backup system; at least one light jet completely loses all pitch trim ability with loss of both generators, with no manual trim provided.

The loss of hydraulics creates its own set of problems, but most won’t be realized until later in the emergency. Larger light jets provide hydraulic power from engine-driven pumps. When the engines stop turning, the pumps do as well. At high speeds an undamaged engine may windmill fast enough to provide a low but usable pressure, but this will reduce glide range. Smaller jets use electrically powered pumps and given the huge power draw to operate them, they are always included on the list of items shed when on battery-only power.

The immediate implications of loss of hydraulics range from loss of speed brakes (making that rapid descent to 25,000 feet a little less rapid) to loss of roll spoilers, if present, making roll control more sluggish. Later the pilot will be faced with the requirement to perform gear extension through backup means. That’s not a difficult procedure, but it’s one more task added at a very stressful time.

With immediate threats managed, the pilot still has the main issue to deal with. Most jets have memory items for a loss of both engines; often they’re the first steps in an attempt to restart an engine. The pilot must again be mindful of altitude, however, as engines have an envelope of allowable altitude and speed combinations that must be respected for a successful airstart.

For many aircraft, the highest altitude at which a restart attempt is allowed is 20,000 feet; some light jets allow for as high as 30,000 feet.

After the always primary task of maintaining control of the aircraft, the most important task the pilot can accomplish is careful execution of the proper checklists. Many dual engine failure events have been followed by the successful restart of one or both engines, so scrupulous adherence to the restart checklist could be a life-or-death action. The stress of the moment will increase the chances of misreading or skipping steps, so pilots must force themselves to consciously slow their actions.

While waiting to arrive at an appropriate altitude for a restart attempt—or following unsuccessful restart attempts—the pilot’s focus should be on identifying a target landing site and managing performance if reaching the site is in question. Reaching an airport may not be guaranteed, even from a high altitude, if flying in remote areas of the world or over water. If multiple airports are in reach, the pilot will want the longest possible runway. Besides the uncertainty of achieving the desired touchdown point, the pilot will likely be executing a zero-flap landing (the flaps are run by hydraulics and/or electrical power) with its associated faster approach speeds. And the crude emergency braking system is far less efficient than the main brakes, which were lost when the hydraulic system pressure dropped.

All aircraft have a best glide speed (VG) for any given weight, but not all manufacturers provide the precise speed in the emergency procedures section of the pilot’s operating handbook or aircraft flying manual. The better checklists give a table of weight versus corresponding maximum glide speed. Some less-ideal checklists simply provide a range of speeds, with the pilot tasked with deciding where in the range to fly. Depending on the specific model, at the proper speed light jets will achieve a glide ratio of 12:1 to 14:1—which is slightly better than that of a piston single.

Whether precise VG data is provided or not, the best forward distance traveled for any given altitude loss will be achieved at a speed corresponding to the lowest point on the drag curve, commonly referred to as L/DMAX—the point where the maximum lift can be achieved relative to drag. This speed changes with weight. VG will decrease as weight decreases, although glide ratio will remain constant. For most light jets, it decreases from around 145 KIAS at maximum gross weight to roughly 125 KIAS at very light weights. In all cases VG is a far slower speed than pilots are accustomed to flying in a clean configuration, and will be closer to stall speed than is commonly flown. This means taking care with large banks and load factors.

VG only provides best glide distance in calm wind. You’ll need to fly faster than VG into a headwind (by one-quarter to one-half of the headwind component), and understand that the glide ratio will be decreased. While an increase in glide distance with a tailwind can be realized by flying slower than VG, it’s not recommended because of your increased proximity to stall speed. But even flying at VG, the pilot will realize an increased glide ratio from the groundspeed bump.

As the intended landing site approaches, the pilot needs to reevaluate the setup. Does it look too high, too low, or just right? A 3-degree glideslope descends at a ratio of 19:1, so you’ll need to be well above any electronic or visual path indicator. Into a 10- to 20-knot headwind a light jet should be able to maintain a 10:1 descent across the ground, so striving to be 600 feet above the airport per nautical mile from the runway should provide a target that keeps you from straying too low or too high.

Aiming to be on final at 3,000 feet agl and five miles from the touchdown point gives you some time and room to make corrections if approaching the field too high or low. Too low? Cut the corner. Too high? Extend the final or perform a 360-degree turn above the five-mile-final target.

As the landing draws closer, the pilot may have unique options that vary from aircraft to aircraft. In some aircraft engaging an engine starter for 20 to 30 seconds may provide enough hydraulic pressure to lower flaps. In others, flaps may lower electrically if sufficient battery power remains by “unload shedding” when the landing is assured. In jets with electrically powered speed brakes, if enough battery power remains the pilot can toggle the speed brakes on and off to assist with vertical path management. All these variations speak to the importance of studying the aircraft-specific checklists and possessing a high level of system knowledge and awareness. Finally, a simulator session can provide eye-opening insights and takeaways dealing with what is a procedure you’ll hopefully never need.