Get the app Get the app
Already a member? Please login below for an enhanced experience. Not a member? Join today
News & Media Nick Moran

Nick Moran likes the wind. Growing up in Washington, he learned to fly fixed-wing aircraft at 15 and earned his certificate at 17 at Glacier Aviation in Olympia. 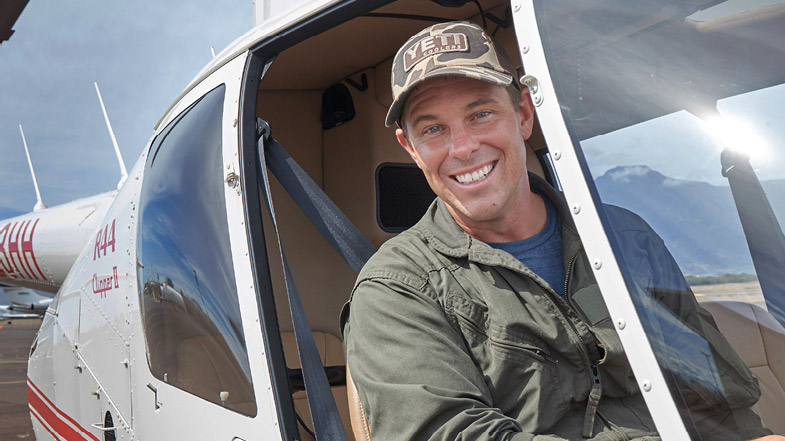 Who | Nick Moran, owner of Go Fly Maui, a helicopter flight school on the island of Maui, Hawaii
Hours | More than 2,300
Certificates and ratings | Single-engine land, instrument and commercial helicopter, CFI and CFII/helicopters
Favorite aircraft | Robinson R44, “although the MD 500 is pretty cool.”

Extra | “It’s hard not to go somewhere in the islands that’s not someone’s best day. The North Shore in the winter is exciting—to fly over Jaws [a popular spot for big-wave surfers] and watch the surfers and take photos is awesome. The Hana shoreline is just what you dream about—it has the coolest airport and you can walk from there to a black sand beach.”

Working at the Bremerton naval base as an ordnance mechanic, Moran longed for a more active lifestyle, so he and wife, Magen, pulled stakes and moved to New Zealand to kite surf. They were instructors in both kite surfing and paddle boarding and “had a blast” but eventually wanted to return to the States. They chose Maui, known for its trade winds and Kona winds.

The “Valley Isle” sits between two volcanos, which create a deep valley that acts like a giant wind tunnel. Trade winds can be as strong as 40 mph; Kona winds in the fall and winter months are usually 12 to 18 mph. But whatever the season, it’s windy on Maui. Moran met up with a friend and started flying helicopters. Eventually the pair ran a flight school with a Schweizer S300, teaching high-wind flying and mountain flying. When the friend went to the airlines, Moran bought a Robinson R44. “I call it my one-ship wonder,” he said. “It’s my Swiss Army knife; it can do everything I need it to do.”

His company at Kahului Airport (one of the windiest airports in the nation) is Go Fly Maui and he teaches visiting pilots how to fly in the wind, navigate 10,000-foot mountains, and enjoy flying in the valleys. “The high winds are not crazy if you’re used to it,” Moran said. “I love a mellow day as much as anyone and the smooth air is awesome. But when the wind stops, I can’t breathe.”