Get the app Get the app
Get the latest news on coronavirus impacts on general aviation, including what AOPA is doing to protect GA, event cancellations, advice for pilots to protect themselves, and more. Read More
Already a member? Please login below for an enhanced experience. Not a member? Join today
News & Videos Opinion: Savvy maintenance
Sponsored by Aircraft Spruce

The looming mechanic shortage: What if your airplane breaks and there’s no one to fix it?

Being a dyed-in-the-wool technology freak, I drive a Tesla Model 3. It has been a superbly reliable vehicle that doesn’t require maintenance very often. 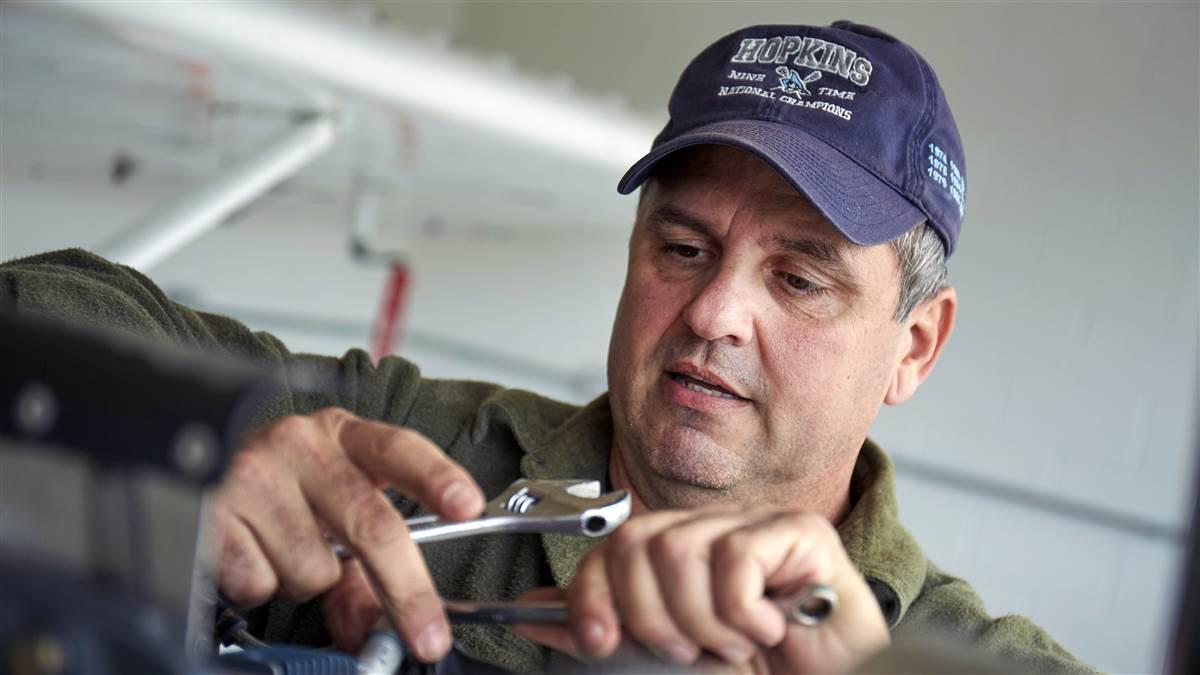 But when it does, I take my Tesla to the nearest Tesla dealership, where it is worked on by factory-trained mechanics who work on nothing but Teslas all day long and know them like the backs of their hands.

The situation was very similar in 1968 when I bought my first airplane, a brand-new 1968 Cessna 182 Skylane. I based it at what is now called John Wayne Airport in Santa Ana, California. In those days, there were three big aircraft dealerships on the field: a Cessna dealer, a Piper dealer, and a Beechcraft dealer.

When my Skylane needed maintenance, I took it to the Cessna dealership on the field, which employed a half-dozen factory-trained airframe and powerplant mechanics who worked on nothing but single-engine Cessnas all day long. The Cessna dealership also had a parts room to die for, so when my airplane needed some component to be replaced it was likely to be in stock. Owners of Pipers and Beechcraft on the field enjoyed the same happy circumstance at their factory dealerships. 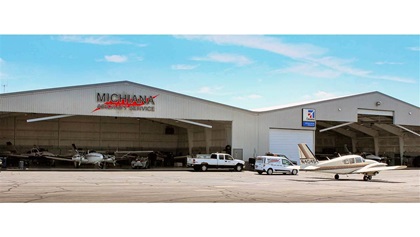 Sadly, those days are gone. The Cessna and Beechcraft dealerships at John Wayne Airport are long gone, and the old Piper dealership now exists primarily as a shop catering to bizjets and turboprops. If you base a Cessna single at John Wayne and need maintenance done, the Cessna authorized service center on the field is Jay’s Aircraft Maintenance Inc. It’s a good shop, but the fact that it’s an authorized service center doesn’t mean that it only works on Cessnas the way it used to. According to Jay’s website, “We are equipped to perform maintenance on any aircraft under 12,000 lbs., including but not limited to those manufactured by Cessna, Piper, Beechcraft, Cirrus, and Socata.”

With a few notable exceptions, that’s the situation today with most shops that work on general aviation piston airplanes. They may have one or more factory-authorized service center signs on the building, but they work on anything with wings that comes through the hangar door. They have to do this to remain in business.

So, the A&P/IA who starts the annual inspection of your Skylane might well have just finished working on a Comanche or a Baron or a Cub. He’s most likely a generalist, not a specialist. Instead of knowing a lot about a few aircraft models, he knows a little about a lot of aircraft models—occasionally just enough to be dangerous. That’s not good.

There are far fewer maintenance shops that work on piston airplanes than there used to be. Over the past decade, lots of small shops have gone out of business. Of those that remain, the best ones are typically booked solid for many months in advance, making it difficult for aircraft owners to cope with unscheduled maintenance needs.

The shops that have gone out of business haven’t done so because of lack of demand. Generally, it’s because they can’t find enough qualified mechanics to hire. Maintenance shops have substantial fixed costs (rent, insurance, and more) and to be profitable they must be big enough to support that overhead. From what I’ve observed over the years, it’s tough to make a go of a shop unless there are at least five or six mechanics swinging wrenches and billing time. Fewer than that and the shop is likely to start losing money, forced to cut back, and ultimately go out of business.

The shops that have gone out of business haven’t done so because of lack of demand. Generally, it’s because they can’t find enough qualified mechanics to hire.A colleague who owns a shop in Pennsylvania told me this: The mechanic that just left my shop was about as good as it gets for a new hire. He worked on C–130s in the Air Force for seven years, had good mechanical ability, a good attitude, enjoyed his work, was local, and had health insurance through his wife who worked for the local government. I hired him to start at $21 per hour with two weeks paid vacation and paid holidays. He picked up the mechanical aspects of the job quickly and turned out to be an excellent wrench.

Sadly, I ended up losing this trainee to a specialty steel mill who offered him $34 per hour with full benefits. In his exit interview, he said he really liked working at my shop, but the combination of higher pay and 401(k) was the deciding factor for him.

I pay my mechanics for eight hours of work, but at best they can only generate five or six billable hours per day. Between the cost of rent, insurance, my office manager’s salary, and other overhead costs of running the shop, there’s no way I can compete with the steel mill without raising my shop rate pretty drastically from its current $92 per hour. I’m afraid I’d alienate my customers if I did that.

My search for replacements for this trainee turned up 20 mechanics. Only two were A&Ps, and neither of them was as good as the unlicensed mechanics. I wound up interviewing four, none of whom had aviation experience. Two had submitted résumés that grossly overstated their maintenance experience. A third wanted to start at $30 per hour plus health insurance. The last one was a recent high school graduate who couldn’t identify a 1/4-inch drive rachet when it was placed next to a 3/8-inch drive rachet and a torque wrench. So, my search continues.

Somehow, we need to start getting kids interested in working on airplanes, and we need to get owners to accept shop rates high enough for us to compete for good mechanics.

Another colleague who owns a 10-person avionics shop in Colorado told me:

It’s especially hard to find new avionics technicians. It takes more than two years to train a new hire to earn his FAA repairman certificate. Unless I hire a local person and train them, they won’t stick around. Even that’s no guarantee.

I hired a local kid right out of college who wanted to stay in the area, a really smart young man. I spent $5,000 sending him to AEA avionics wiring classes this summer, and told him I expected him to stay at least a year. Two months later, Intel hired him to work in their plant in Oregon for almost twice what I was able to pay him. How do I compete?

We are in a specialized part of a highly regulated industry, but our customers are cheapskates who are looking for high-quality work at bottom-end pricing. We shop owners need to have the courage to start charging more so we can compete in the labor marketplace. But airplanes are highly mobile, so if my bid comes in too high the owner will just fly the airplane to New Mexico to have the work done. It’s a very difficult balance.

Finally, this from a colleague who owns a piston GA maintenance shop in Tennessee:

In today’s very mobile society, many technicians only want to chase the money. They are willing to pull up stakes and travel to wherever the grass appears greenest. When I hire a new kid, I must pair him with one of the more experienced mechanics in the shop. This means that two people are getting paid to do the work normally done by one person, and they’re probably doing it slower. Of course, we can’t pass this higher labor cost along to our customers. So, the cost of training a newbie is quite expensive. Then after a year of intense training, the new hire may take his newly gained skills and experience to another shop.

So, we try to hire people with local bonds. I’m happy to hire anyone with good tactile skills—car mechanic, tractor mechanic, lawnmower mechanic, et cetera. I find they are much easier to train to work on piston GA airplanes than an A&P just out of school, the military, or the airlines.

Small piston GA shops like mine must up our game significantly to compete with the Deltas and FedExes of the world. Healthcare coverage is one of the most difficult issues for us. What this means to aircraft owners is that shop rates must go up and scheduling lead times will be longer. My shop presently has annual inspections scheduled 12 months out with very few openings left on the calendar. Structural repairs and engine conversions are on a four-month backlog. We’d love to expand but we just can’t find or train enough qualified technicians.

Several colleagues who own shops in or near major metropolitan areas told me that they have raised their shop rates quite significantly and not seen any serious loss of clientele. One of them who owns a shop near New York City put it this way: “When we finally bit the bullet and raised our shop rates to $125/hour for piston and $140/hour for turbine, the only thing that happened is that we lost a handful of customers we really didn’t want anyway, and never heard a word of complaint from the rest.”

Where will new mechanics come from?

The COVID-19 lockdowns have been a disaster for A&P schools. According to the Aviation Technician Education Council, one in five A&P schools has suspended operations, with many other schools voicing concern over their long-term viability. Forty percent of the schools expect a decline in 2020 graduates averaging 28 percent. Half expect that enrollment will decline in 2020 and 2021 by 31 percent.

The long-term trend seems to be a deterioration of the maintenance infrastructure for piston GA airplanes, and that should be of concern to every owner.