Get the app Get the app
AOPA Members DO more LEARN more SAVE more - Get MORE out of being a pilot - CLICK HERE
News & Media Technique: It’s complicated

Performing a chandelle smoothly and effortlessly

The Airplane Flying Handbook describes the chandelle as a maximum performance climbing turn. Many commercial pilot practical exam candidates present it as an antidote for the box canyon turn scenario in which a tight turn must be executed in order to reverse course with a minimum turn radius to safely exit the canyon. Neither one of these is true. 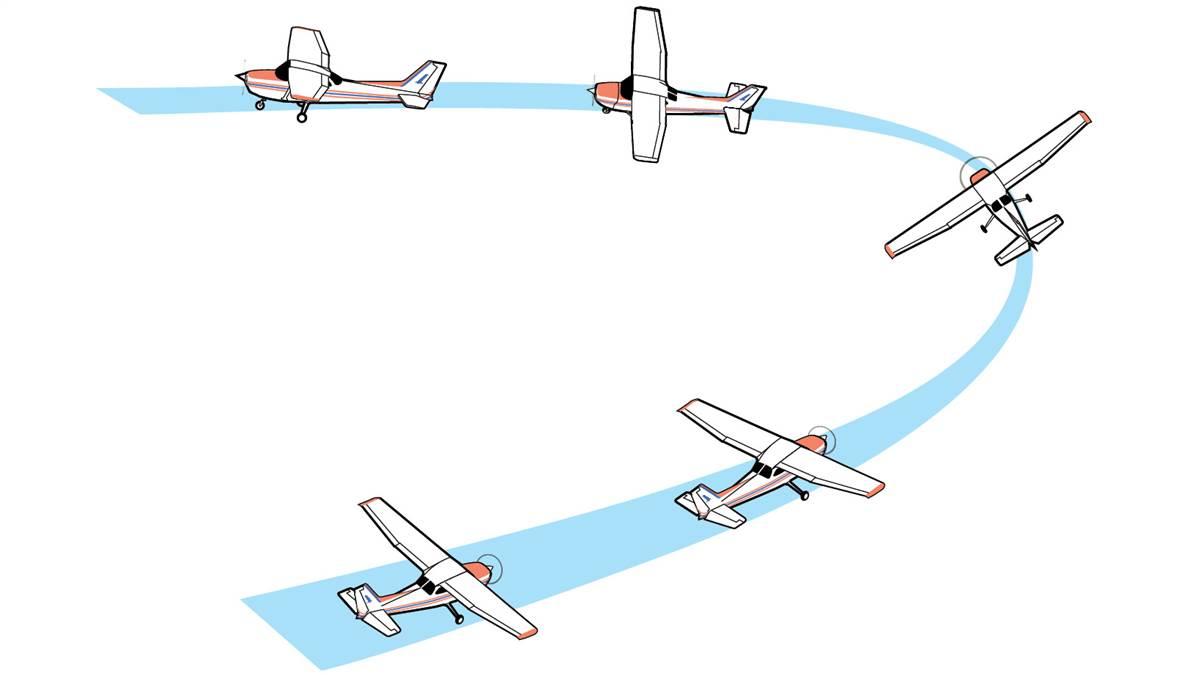 Perfecting the chandelle shows a mastery of the aircraft, and the maneuver is among those in the Commercial Pilot Airman Certification Standards.
Illustrations by Steve Karp

A chandelle is a climbing turn, performed in the clean configuration, with a 180-degree change in course. It begins near the maneuvering speed of the aircraft and finishes close to its stalling speed. The first half of the chandelle features a constant bank attitude and increasing pitch attitude. During the second half of the maneuver, the pitch attitude stays constant and the bank continuously decreases to a level attitude.

The procedure for a chandelle goes something like this: Find a long, straight road and fly directly across and beyond it for half a mile or so. At maneuvering speed, smartly yet smoothly roll into a 30-degree bank, neutralize the ailerons and pull back on the yoke. As the nose of the aircraft passes through the horizon, add climb power and continue the pull until the aircraft is parallel to the road. In the second half of the maneuver, the bank is continually relaxed until the wings are level and the aircraft is headed directly at the road once more. During this phase, maintaining a constant pitch angle necessitates pulling back on the yoke due to decreasing airspeed and control effectiveness. Hold the aircraft near a stall for a few seconds before lowering the nose for the recovery. It may take a few attempts to find the correct rate of pull-up during the first half so that the aircraft nears a stall just as the wings are once again level at the end.

The chandelle is a beautiful maneuver but, by any obvious metric—small turn radius or gain in altitude—it is not a maximum performance maneuver.
There is a lot going on in this maneuver. As the aircraft slows through various airspeeds, the pilot must continually adjust for the overbanking tendencies. Interestingly, if a pilot pulls back on the yoke, being careful not to introduce roll, the bank angle with respect to the horizon will naturally increase beyond 30 degrees. (If that seems suspicious, try the maneuver using a model airplane and you’ll witness the phenomenon.) When my airplane is parallel to the road, the bank angle is typically 45 degrees. The Airplane Flying Handbook says the bank should stay at 30 degrees during the first half of the maneuver, and performing the chandelle this way requires actually relaxing some bank—as well as a gentler initial pull on the yoke—so that the stall is not encountered too soon. With continually increasing angle of attack, the left turning tendencies become pronounced and compensating for them will be very different in a chandelle to the left compared with one to the right. 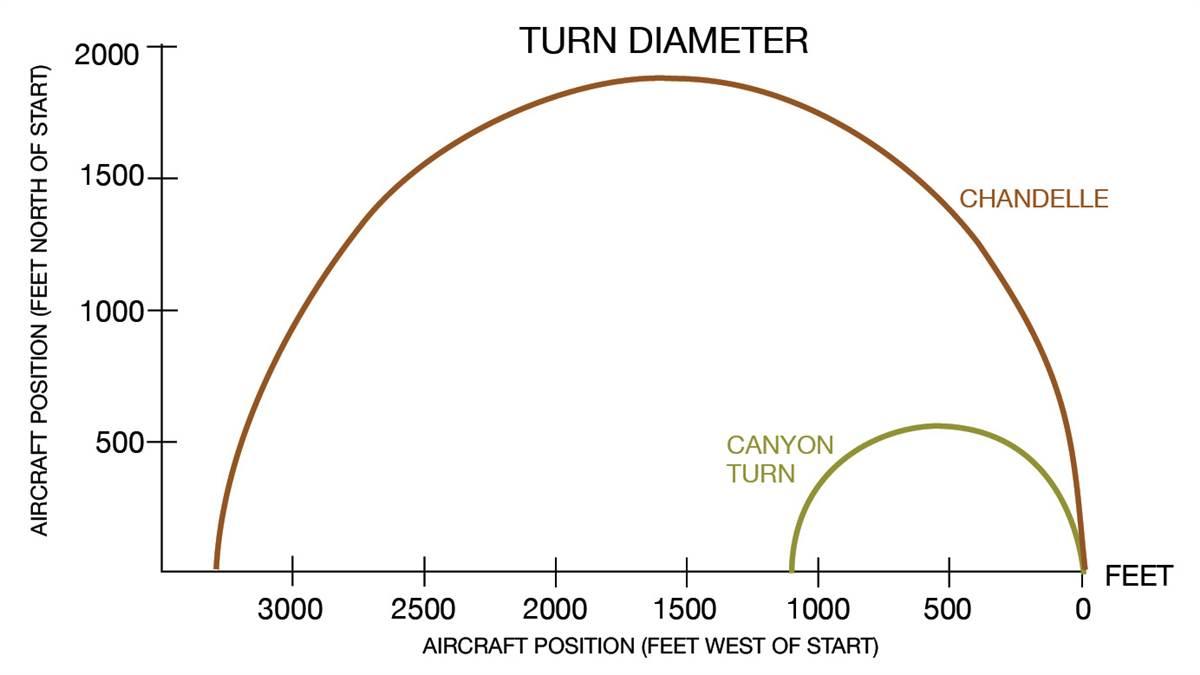 These two curves show the ground tracks of a chandelle and a canyon turn for a Beechcraft Bonanza. Both turns were made to the left in a no-wind scenario. The chandelle track was generated using a simulation in which the aircraft started at the reduced-weight maneuvering speed of 117 knots and slowed to the published stall speed of 63 knots using a 30-degree bank during the first half of the maneuver. The level canyon turn used full flaps, a 45-degree bank turn and 80 knots (found by adding a 20-percent buffer to the reduced-weight stall speed for the level turn). A 60-degree-bank level canyon turn at 95 knots would shave an additional 200 feet off the diameter of the turn and if losing altitude in the turn were an option, the turn diameter would be smaller still. The chandelle is not the choice for reversing course in a confined area.

The chandelle is a beautiful maneuver but, by any obvious metric—small turn radius or gain in altitude—it is not a maximum performance maneuver. Reversing course with a small turn radius would necessitate a greater bank angle (see “Take it to the Bank,” May 2020 AOPA Pilot). And most of the maneuver is not flown at the best rate of climb speed, and climb rate suffers dramatically once the airspeed decays below VY.

The technique to reverse course in the box canyon typically involves a steep turn at the slowest possible airspeed to execute a tight turn. Because stall speed increases with the load factor, a level turn with steep bank angle will require a faster airspeed in order to avoid a stall. If losing some altitude is an option, then the turn radius can be decreased by using a very steep bank and allowing the aircraft to descend in the turn. With a smaller load factor, a slower airspeed can safely tighten the turn even more. Finally, turning into the wind allows the footprint of the maneuver to become smaller still. The figure above compares the no-wind turn radius for the chandelle and the level box canyon turn for the Beechcraft Bonanza. The chandelle should not be considered as a way to exit a confined area, especially if high density altitudes have produced poor climb rates and descending isn’t an option.

One of the knowledge items listed in the Commercial Pilot Airmen Certification Standards requires that the candidate explain the purpose of the chandelle, but the FAA references don’t provide one. My personal take is that it’s a complicated maneuver with changing pitch, bank, and power. The pilot exerts authoritative control over the aircraft but does so smoothly so that a passenger feels comfortable. It’s an outside-reference maneuver with the pilot continually scanning for traffic. Mastering the chandelle provides good evidence that a candidate deserves the commercial pilot certification.