Not all poetry is “How do I love thee? Let me count the ways” and “Only God can make a tree.” Some verse has been composed about deeper and more meaningful themes, like flying. Perhaps the most famous aviation poem is “High Flight,” which almost everyone has heard, at least the first and last lines—“I have slipped the surly bonds of Earth” and “Put out my hand, and touched the face of God.” 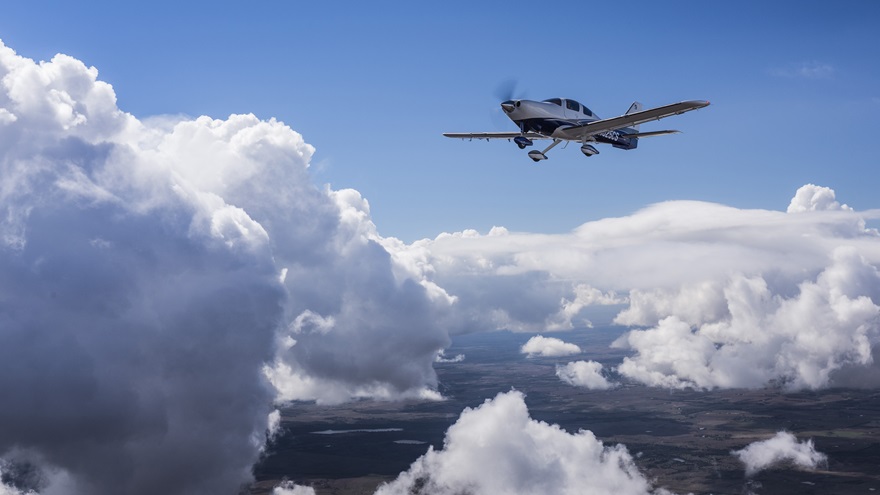 I first heard this poem in the days when TV broadcasting ended at 2 a.m. After a bad B-movie, our local station would sign off with images of military jets flying in formation while the narrator intoned, “…put out my hand, and touched the face of God.”

The author of this most famous of all aviation poems, John Gillespie Magee Jr., was born in 1922 to an American father and British mother, both Anglican missionaries in China. At age 7, he attended the American School in Nanking and later moved to England where he attended the celebrated Rugby School. There, he developed a love of poetry and won Rugby’s Poetry Prize in 1938. He was an admirer of the poet Rupert Brooke (1887–1915), who had also attended Rugby and died in World War I.

Magee was at school in the United States when World War II broke out in Europe in 1939. Instead of attending university, Magee joined the Royal Canadian Air Force in 1940 and received his wings in 1941. He was sent to the United Kingdom for advanced training on Spitfires at Llandow, Wales. There, on August 18, 1941, he flew a Spitfire to 33,000 feet, higher than he’d previously flown, and it’s this “high flight” that is believed to have inspired the poem.

Oh! I have slipped the surly bonds of Earth And danced the skies on laughter-silvered wings; Sunward I’ve climbed, and joined the tumbling mirth of sun-split clouds,—and done a hundred things You have not dreamed of—wheeled and soared and swung High in the sunlit silence. Hov’ring there, I’ve chased the shouting wind along, and flung My eager craft through footless halls of air. . . .

Up, up the long, delirious, burning blue I’ve topped the wind-swept heights with easy grace Where never lark, or ever eagle flew— And, while with silent lifting mind I’ve trod The high untrespassed sanctity of space, Put out my hand, and touched the face of God. —John Gillespie Magee Jr.

Magee wrote the poem immediately after landing, and it was first read by a fellow pilot later that day in the officer’s mess. Magee sent a copy of the poem to his parents, in which he wrote, "I am enclosing a verse I wrote the other day. It started at 30,000 feet, and was finished soon after I landed." His father, then a curate in Washington, D.C., printed the poem in church publications, and that might have been the extent of its renown, if not for a convergence of tragic events.

After training, Magee was assigned to a fighter squadron at RAF Digby in the East Midlands of England and took part in his first operational sorties in November and December 1941. On December 7, 1941, Japan attacked Pearl Harbor and the United States was drawn into World War II. Four days later, December 11, 1941, Magee’s Spitfire collided with an Airspeed Oxford, a twin-engine training aircraft, and Magee was killed, aged 19. He was buried in the graveyard of Holy Cross Church in the village of Scopwick, close by RAF Digby.

Because Magee was a U.S. citizen, he was among the first American casualties of the war, and his parents were interviewed by Washington newspaper reporters. Magee’s father gave the journalists a copy of “High Flight,” and it’s likely this is how it came to the attention of Archibald MacLeish, the Librarian of Congress. The poem was subsequently included in the 1942 "Poems of Faith and Freedom" exhibition at the Library of Congress. There, it was displayed with two renowned World War I poems, John McCrae’s “In Flanders Fields” and Rupert Brooke’s “The Soldier.”

“High Flight” quickly became one of the best-known poems of the war; British pilots often flew with a copy in their flight suits. The poem was recited by actress Merle Oberon during the “Hollywood Victory Caravan,” a war bond tour by Hollywood stars, and Orson Welles read it numerous times on radio programs throughout the war.

“Courage,” by Amelia Earhart
“The Aeroplane,” by Gordon Boshell
“An Irish Airman Foresees His Death,” by William Butler Yeats
“The Bombers,” by Sarah Churchill
“Battle of Britain,” by Cecil Day-Lewis
“Flying Crooked,” by Robert Graves
“History of the Airplane,” by Lawrence Ferlinghetti

From the 1950s onward, the poem was used by many television stations for their end-of-the-broadcast-day “sign off,” introducing the poem to generations of younger Americans. Several vintage “sign-offs” that include the poem can be found on YouTube.

The poem was taken into orbit by astronaut Michael Collins on Gemini 10 and to the moon’s surface by Apollo 15 moonwalker James Irwin. Numerous musicians have set the poem to music, including pilot and singer John Denver, and the poem has been recited in numerous films.

President Ronald Reagan quoted “High Flight” in his address to the nation on the evening of the 1986 Space Shuttle Challenger disaster. He spoke of the lost crew, “We will never forget them, nor the last time we saw them, this morning, as they prepared for their journey and waved goodbye and 'slipped the surly bonds of Earth' to 'touch the face of God.’” The text of “High Flight” is inscribed on the Challenger Memorial at Arlington National Cemetery. Lines of the poem—usually only the first and last—can be found on the gravestones of many aviators, including Magee’s. Monuments to fallen pilots around the world often include the poem in its entirety.

“High Flight” has been transcribed so many times that errors have crept into many of the published versions. The most authoritative version comes from the Library of Congress, which holds the original letter from Magee to his parents. Magee had written, “if anyone should want this, please see that it is accurately copied, capitalized and punctuated.”

Nearly 80 years after the composition of “High Flight” by a 19-year-old pilot preparing for war, it continues to evoke the joy of flight and inspire people to soar.