A confluence of time and money

The paradox that fueled general aviation in 2020

For commercial aviation and business jet travel, 2020 was a brutal year. For general aviation, in the beginning of the coronavirus pandemic it was hard for many operators to imagine what business would be like once stay-at-home orders were lifted. But shortly after reopening last May, dozens of recreational flight schools and charter operators across the country started experiencing a major uptick in pilot training and sales, leading to 2020 becoming one of their best years on record. 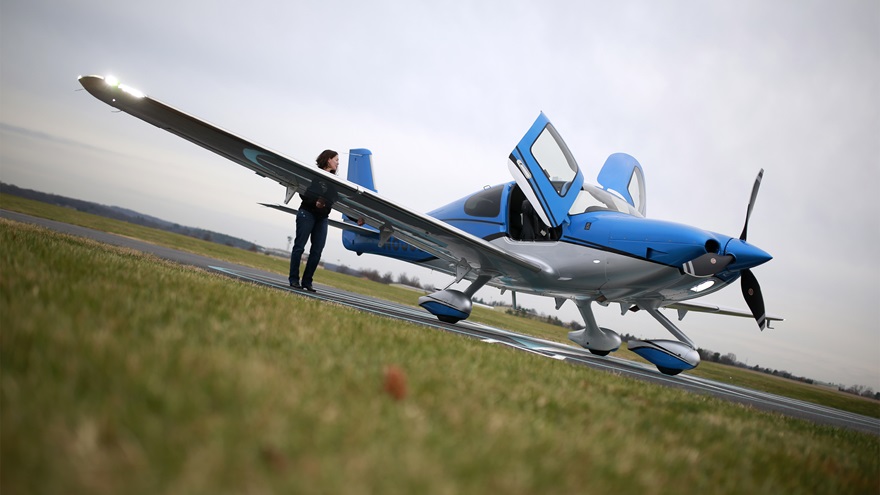 So, what exactly led to this pandemic-induced shift? I met with four flight training providers from all four corners of the United States to discuss this trend and how the pandemic has had a positive impact on their operations. Although each operator offers various services, from aircraft management and maintenance to charter and pilot services, they all seemed to experience the same upward trend in 2020.

For Paul Sallach, president of All In Aviation in Las Vegas, revenue generated from flight instructor hours increased over 150 percent from 2019 to 2020. “People are coming out of the woodwork wanting to learn to fly. We hired three new instructors and purchased four new aircraft in 2020 just to keep up with demand,” said Sallach.

It’s well-known that learning to fly takes two things—time and money. While most of the country was shut down, many flight schools were considered essential and permitted to continue operations. With executives, attorneys, and entrepreneurs now working from home, the people with the most discretionary income now had the most time to devote to training. So, for training centers who cater to the affluent customer, this sudden confluence of time and money, coupled with concerns about safely flying on the airlines, provided the perfect balance of conditions for business to soar. 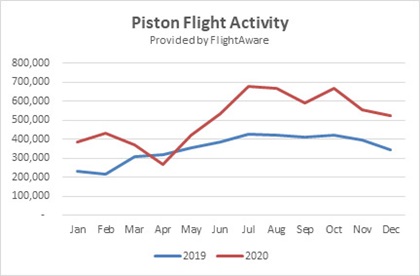 When a student pilot starts flight training, typically lessons are conducted in piston aircraft such as a Cirrus SR20 or a Cessna 172. According to a flight traffic report provided by FlightAware, which operates the world's largest flight tracking and data platform, the number of piston aircraft flights across the country between June and December of 2020 was 40 to 60 percent higher than in the same months in 2019, with peak activity experienced in July and October.

Lewis Liebert, CEO of Performance Flight & Custom Jet Charters in New York, attributes a paradigm shift in what he calls a “paradoxical relationship” between time and money for the growth he’s experienced. “People who’d been commuting to Manhattan an hour and a half each way were now working from home, so these folks were suddenly getting two to three hours of their lives back, giving them time to train.”

April Gafford, founder and CEO of JATO Aviation in San Francisco, explains her average customer has a considerable amount of discretionary income, affording them the opportunity to make choices on how they want to live life during the pandemic.

“They have decided with their families they are going to live and travel in a different way than they have done in the past, and to do that they’re purchasing aircraft, learning how to fly and also using us for pilot services,” said Gafford.

With the extra time and money, first-time pilots are throwing themselves into training, fast-tracking their certificates, and purchasing aircraft at record speeds. Daniel Christman, president of Aero Atlanta Flight Center, said the school’s flight training hours went up 22 percent in 2020, and the school had its first ever 1,000-hour month in July with six instructors billing 150 hours each. “As soon as Atlanta reopened after the shutdown, we had one client who purchased an SR22, earned his private license in a month, instrument rating a month after that, and took delivery of the aircraft by December. He just crushed it.”

Sallach said, “Yeah, we had a student who started training in May, immediately bought an SR22, received his license in October, took delivery of the plane that same month, and just started on his instrument rating. The extra time on their hands has allowed first-time pilots to make their bucket list of learning to fly become a reality in a matter of months.”

Working from home has a new meaning

The ability to work remotely from anywhere has also led private pilots—as well as those who can afford pilot services and charter flights—to travel and even temporarily relocate to their vacation homes. Gafford explains that throughout Silicon Valley and San Francisco, the combination of tech executives working from home while their kids perform distance learning has freed them to buy or charter aircraft to take advantage of their second homes.

“One of the reasons we have so many Cirrus SR22 turbos is because we’re so close to the Tahoe area, and we have a lot of customers with second homes there. We’ve had an explosion of people buying those aircraft, getting trained to fly them, and moving their families there to work and do distance learning remotely.”

Liebert agrees that people heading to their second home is a common denominator of those who are traveling right now. The biggest impact on his business has been in the charter market. “We are in the Gold Coast of Connecticut and Manhattan, and everyone is going to Florida. There are more people flying privately now than ever before, however the people who were already doing it are flying less often, because they’re now flying to their vacation homes and staying there for the entire winter instead of coming back and forth. So, flight activity from current aircraft owners has been substantially down, but our charter brokerage is up 400 percent.”

Christman said, “Since we’re landlocked in Atlanta, our clients are heading to the beaches—Destin, Myrtle Beach, Hilton Head, the East coast of Florida and Panama City. They can hop in the aircraft on Friday afternoon at 3 o’clock and be at their beach house in time to catch a Gulf Coast sunset.”

The surge in training and private business travel in 2020 also led to record new and used sales for small aircraft, a trend that’s continued through the start of 2021. In fact, while sales of new turbine and other larger aircraft slumped, piston airplanes were the only aircraft category to show an increase in sales in 2020, with Textron Aviation and Cirrus Aircraft leading the industry in piston sales.

Sales reps are having a hard time keeping up with demand—orders for new aircraft come with long delivery times, and the inventory for used aircraft is quickly dwindling. Buyers run the gamut from private pilots who lease back their investments to operators like Sallach to buyers who are totally unfamiliar with aviation but no longer want to fly commercial.

“Our 2020 pre-owned sales were up 33 percent compared to 2019,” said Sallach, who brokers sales through Lone Mountain Aircraft along with Christman. He pointed out that in January of 2020 there were approximately 300 to 325 pre-owned Cirrus Aircraft advertised on any given day on Controller, a publisher of new and used aircraft available for sale. By the end of March, there were less than 150, demonstrating that supply within the market has significantly shrunk. What is unique this year, he added, is that depreciation has not occurred like historically expected. Instead, prices have been stable with some instances of increasing values.

Cirrus Aircraft is booking all the way into December for delivery of new aircraft, and for purchases of the SF50 Vision Jet, new owners will have to wait months before they can train with the manufacturer to earn the type rating to fly it.

Christman added, “I’m selling a Cirrus Vision Jet to a client who isn’t a pilot and doesn’t know yet where he’s going to get one, because he wants to avoid airline travel going forward. The plane is just going to sit in the hangar until he figures it out. This is something I’ve just never seen before!”

Gafford, whose sales increased 15 percent by the end of 2020, has put an expanded focus on consulting buyers on the expectations of aircraft ownership, whether they plan to do flight training or hire a pilot. “That will continue to be an important part of our business going forward. Our philosophy is to educate clients, and now we have a more formal vetting process.”

Liebert, too, witnessed a dramatic shift in 2020 sales. “The absorption rate across the industry has been fantastic from Gulfstream G650s down to prop planes. Everyone was saying if you own a Hawker, you’re probably the last owner, but now people are buying them, and in some cases the values have even gone up. It’s shocking. They just want to get in—and on the jet side it’s a cheaper entry point. On the Cirrus side, all the used inventory has been gobbled up.”

Will these trends persist?

Time will tell if the upward trend in training, charters, and sales will continue to rise through 2021 and beyond. Gafford anticipates that once distance learning ends and people’s lives are relocated back to their primary homes, her business may be affected when lifestyles return to pre-pandemic conditions. However, many businesses are adopting liberal work-from-home policies, with virtual offices becoming the new normal. Liebert added, “As long as people are able to work from home, it’s very empowering for this industry.”

Sallach, Gafford, Liebert, and Christman agree there are many factors that will impact change within the industry, but the confluence of time and money will continue to influence the future. One of their biggest concerns is the ability to sell airplanes based on production. Each expressed they’ve already put in orders for 2022 aircraft because deliveries are back-ordered that far out. With values continuing to rise, and inventory shrinking, the trend may end up resulting in fewer sales.

“I think we’re also going to see a real shift in private pilots getting into turbine aircraft versus prop, as the price of personal jets like SF50s [begins] to bump into the price of an SR,” Liebert added. That could have the potential to dilute flight school operations, when efforts are put toward turbine training at the manufacturer level.

Overall, one thing that has given this group the greatest optimism is the number of new customers who were introduced to the industry in 2020 through flight training, charter, and ownership management. “This really shows us the potential of where private aviation is going,” said Liebert.

Gina Yager is the principal of GYC Vegas, a public relations and marketing company based in Las Vegas that specializes in media relations, marketing, branding, community relations, and special events. A Southern Nevada resident for 19 years, Yager has over two decades of experience handling PR for multiple industries including hospitality, entertainment, technology, health, education, retail, and aviation—working with startups and small businesses to multinational corporations. GYC has been handling PR for All In Aviation since 2018, when Yager was first introduced to the world of general aviation.