Get the app Get the app
Already a member? Please login below for an enhanced experience. Not a member? Join today
News & Media An unlikely friendship

Adrian Eichhorn and Shinji Maeda were born 24 years apart on opposite sides of the planet. They were raised in different cultures, speak different first languages, and work in different professions. They met online through their shared passion for long-distance flying, however, and soon discovered a spooky series of similarities. 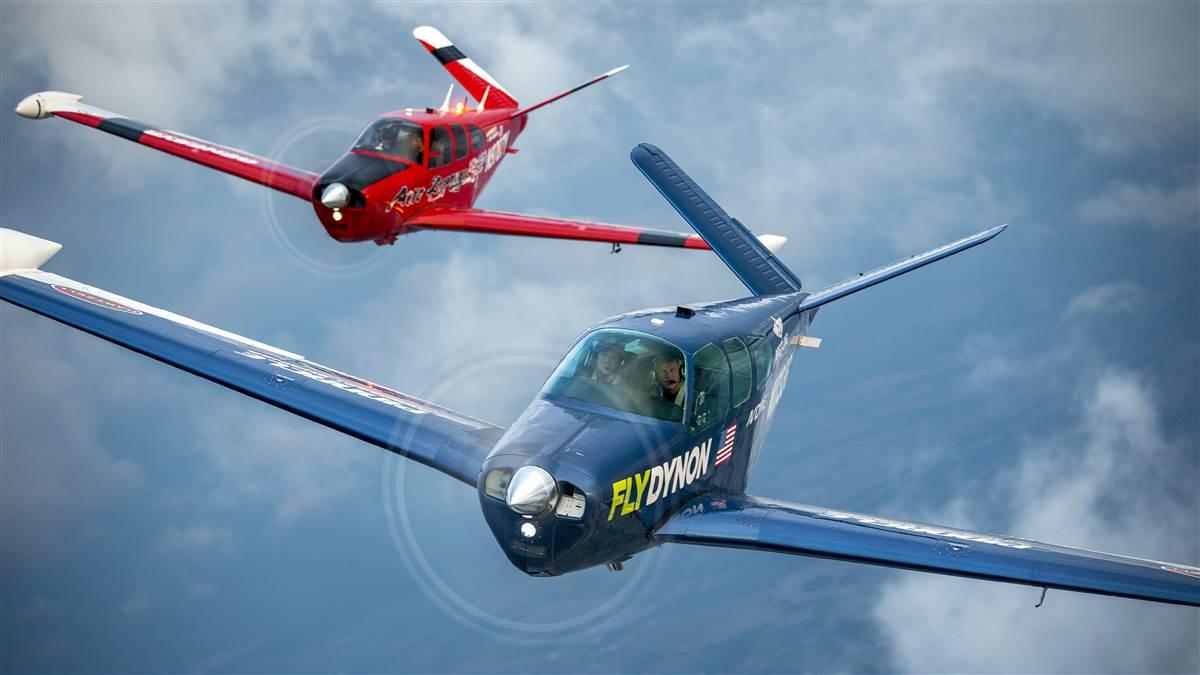 Eichhorn, 65, a recently retired airline pilot, and Maeda, 41, a Boeing production analyst raised in Japan, both earned engineering degrees at U.S. colleges; were seriously injured in motorcycle accidents in their late teens (Eichhorn has a steel plate in his forearm, and Maeda is blind in his right eye); and they fly modified Beechcraft Bonanza V35Ps built less than one year apart (in 1962 and 1963).

“It’s unreal how much we have in common,” Eichhorn said. “We both come from tight-knit families with parents who supported our aviation ambitions. And our first ‘flights’ through the air happened when we got hit by cars. On a personal level, we just clicked.”

Eichhorn pioneered the use of medical borescopes in piston aircraft engine inspections and flew around the world in his Bonanza in 2016. Maeda founded a nonprofit corporation that provides discovery flights for young people with disabilities. During his upcoming world flight, he plans to give talks in more than a dozen countries about overcoming adversity.

They both have coarse, offbeat senses of humor (Eichhorn shares odd memes, and Maeda is quick with one-eye puns: “I’ll keep an eye on that!”). They minimize the impact of personal and professional setbacks, and they treat their achievements as largely undeserved, preferring to pass the credit to others. Eichhorn says his airline/corporate flying career was a “lucky break” that came about because he was in “the right place at the right time.” Maeda credits a former professor, Ed Wischmeyer, for recognizing his drive, putting him in the left seat for the first time, and convincing him that he could become a pilot. And Maeda says he isn’t exaggerating when he claims U.S. aviation “saved my life.”

“After my motorcycle accident in Japan, I was classified as permanently disabled. I couldn’t work. I’d never be allowed to fly. I couldn’t stand the idea of being a burden to my family or others—so I decided to kill myself. At 18 years old, there was nothing for me to live for.”

Maeda’s father learned that his son could still fly in the United States despite his injuries, however, and encouraged him to apply. He attended Embry-Riddle Aeronautical University in Prescott, Arizona, and earned a pilot certificate in 2004. He’s now a seaplane pilot and flight instructor with about 1,300 hours total flying time. He’s also married with a 3-year-old son, and infant daughter.

“The United States gave me my life back,” Maeda said. “If I stayed in Japan, my life would be over. There’s no question about that.”

Maeda read about Eichhorn’s around-the-world flight in 2016 and sent him an email full of technical questions. “He flew a Bonanza and that’s what I wanted to do,” Maeda said. “I knew his experience could help me.”

Eichhorn said he receives many inquiries about long-distance flying, and his responses tend to be short and brutally frank. Mostly, he tells people they’re not ready to take on such a challenge.

Even though Maeda doesn’t have vast flying experience, Eichhorn said he’s impressed with the thoughtful, deliberate way Maeda has approached the task. Maeda hired Bonanza maintenance experts to upgrade his airplane with a Continental IO-550 engine, a JPI engine monitor, dual Garmin G5 attitude instruments, a GTN 650 GPS/com, and a fuselage ferry tank. He found a professional flight dispatching firm in England to handle the border crossing and customs paperwork. And he’s raising and setting aside the funds he estimates the trip will cost—between $50,000 and $70,000.

For Maeda, the journey isn’t an ego trip. He’s got a hopeful message that he thinks people are ready to hear. “This isn’t about me,” he said. “It’s not about Shinji. It’s about following your dreams. People face difficulties—small, medium, and large—everywhere in the world. My life is just one example of that.”

Maeda said his late father, a farmer from Hokkaido, the northernmost main island in Japan, who died from cancer in 2019, encouraged him to make the global trip during one of their last talks. Maeda’s dad was proud of his son’s resilience for recovering from life-threatening injuries, and he told him others would benefit from knowing his story.

“He apologized to me for not being able to provide any specific guidance to me as I pursued my aviation dreams,” Maeda said. “I told him that was exactly wrong. He was with me the whole way—and completing this flight successfully is a way to honor him and the many, many sacrifices he made for his family.”

Maeda isn’t treating the journey like a race. He plans to spend three months away from home—and Eichhorn says that’s wise.

“Pilots make mistakes when they’re fatigued, hurried, or distracted,” Eichhorn said. “Shinji is planning this trip in a way that recognizes those factors and makes them manageable.”

“This isn’t about me....It’s about following your dreams. People face difficulties—small, medium, and large—everywhere in the world. My life is just one example of that.”  —Shinji MaedaEichhorn and Maeda met for the first time near the Boeing engineer’s home in Seattle while Eichhorn was there on an airline trip. Eichhorn looked over Maeda’s Bonanza and liked the modifications he was making. In 2020, he invited Maeda to fly to Virginia, Eichhorn’s home state, on a shakedown cruise for the recently renovated aircraft.

Maeda made the eastbound trip in 11 flight hours with one fuel stop.

“It was my longest one-day trip in the Bonanza and it went almost perfectly,” Maeda said. “I was a little nervous because I’ve never flown on the East Coast, or into the Washington, D.C., airspace, and I didn’t know if the controllers would be able to understand my accent. But they were great. Have I told you how much I love the United States aviation system?”

Maeda and Eichhorn participated in an air-to-air photography flight at AOPA headquarters in Frederick, Maryland. It was an unusually strenuous sortie because of heat, blustery winds, and stormy weather.

Afterward, Maeda made a short night flight back to Virginia, then pointed his airplane home to Seattle the next day. With about 30 hours of flying in three days, it was only a warmup for the aviation marathon he’s planning.

Maeda had originally scheduled his global circumnavigation for the summer of 2020 but was forced to postpone when the COVID-19 pandemic stopped most international flying. True to form, Maeda has come to view the delay as a blessing in disguise. “It gives me more time to test the airplane and make sure everything is ready,” he said. “We were pressing hard to meet our original schedule, so this takes away all the time pressure.”

It also means Maeda will have some company on the first part of the journey when it gets underway in 2021.

Eichhorn is planning another long-distance flight of his own—a flight of several Bonanzas over the North Pole. Now, Maeda, Eichhorn, and others intend to fly as a group from the U.S. East Coast to Canada and Iceland at the beginning of their respective trips.

From Iceland, Maeda will continue east to Europe, Asia, then across the North Pacific to Alaska and home. Eichhorn and his fellow pilots plan to fly from Iceland to Norway, then continue over the pole to Canada and back to the United States.

“It’s going to be great to start out together on these two great journeys,” Eichhorn said. “Shinji’s a friend, and I intend to help him in every way I possibly can. That’s what friends do.”