Get the app Get the app
AOPA Members DO more LEARN more SAVE more - Get MORE out of being a pilot - CLICK HERE
News & Media 100 years of protecting food, fiber, and forests through aerial application

100 years of protecting food, fiber, and forests through aerial application

What started out as a small two-person experiment in 1921 in Ohio is now a multibillion-dollar industry with 1,200-horsepower, turbine-engine airplanes, treating more than 127 million acres of U.S. cropland each year.

The agricultural aviation industry gathered at Virginia’s Leesburg Executive Airport on August 3 to mark a century of service to the nation. The event traced the industry’s path from that first flight by U.S. Army test pilot Lt. John Macready in a World War I surplus Curtiss JN-6 biplane. The flight from McCook Field in Dayton set out to eradicate caterpillars in a nearby catalpa tree grove, which provided wood that was used for railroad ties and poles. 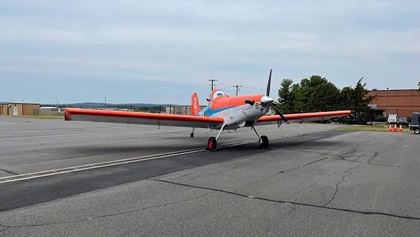 According to the National Agricultural Aviation Association, 1,560 agricultural aircraft operators in the United States treat crops in all 50 states (28 percent of all cropland), operating under the FAA’s Part 137 regulation governing aircraft that dispense chemicals designed to treat soil or crops, including firefighting aircraft. Based on a 2019 NAAA survey, those businesses operated 3,588 aircraft (3,014 fixed-wing airplanes and 574 helicopters). Eighty-one percent of the aircraft had turbine engines, while 19 percent were piston powered.

“The last century brought almost unimaginable innovation and technological advancement in agricultural production as a whole,” said NAAA CEO Andrew Moore. “And no segment of agriculture illustrates that warp-speed progress more than how far we’ve come in aerial application.”

A centerpiece of the event was an official handoff flight of Dusty Crophopper, a lead character in the 2013 Disney animated film Planes and the 2014 sequel Planes: Fire & Rescue, to the Smithsonian National Air and Space Museum’s Steven F. Udvar-Hazy Center in Chantilly, Virginia. The full-sized, fully flight-capable replica of Dusty Crophopper—a converted piston Air Tractor—was used at airshows in 2013 and 2014 to drum up interest in the two films. The aircraft was donated by aerial applicator Rusty Lindeman of Rusty’s Flying Service in Texas.

More recently, in March 2020 with the onset of the COVID-19 pandemic, the U.S. Department of Homeland Security designated food and agriculture support workers, including those engaged in the maintenance and manufacture of aerial application equipment, as part of the nation’s essential critical infrastructure workforce.

“People still need to eat, and to feed the world, the U.S. and other countries must practice modern, highly productive farming techniques,” explained said Jim Hirsch, president of Olney, Texas-based Air Tractor, the leading U.S. manufacturer of agricultural airplanes. “You cannot produce the amount of food and fiber the world needs without modern ag techniques that include aerial application of plant nutrients and plant-protection products.”

Along with technological advancements of the past century, agricultural aviation has also adopted strict safety and ethical standards, especially as pesticide use came into the crosshairs of activists and government regulators. NAAA’s Operation S.A.F.E. (Self-Regulating Application and Flight Efficiency) has provided aerial applicators with education, research, and analysis to ensure that their operations are safe in the air and on the ground.