Get the app Get the app
Already a member? Please login below for an enhanced experience. Not a member? Join today
News & Media Pilots: Daniel Sazhin

Glider pilot Daniel Sazhin is interested in decisions. He wants to know how we adapt our decision making to changing situations. 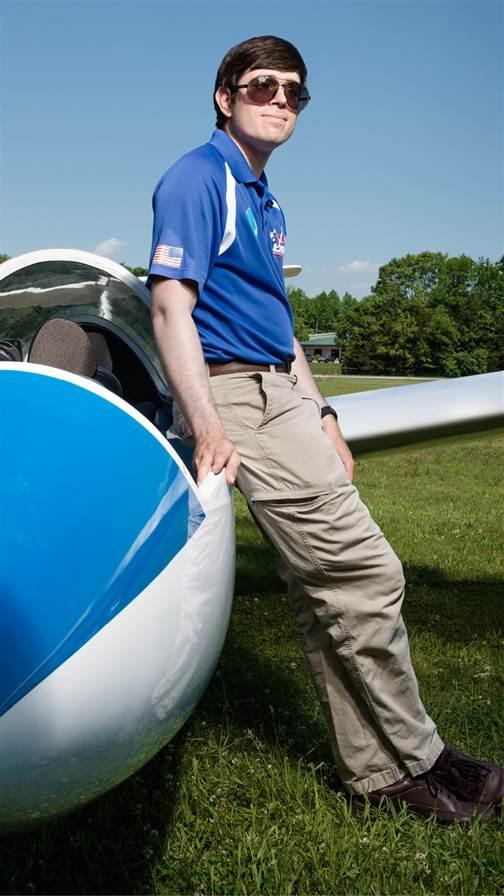 As a pilot he studies his own decisions during cross-country flights and glider competitions, and as a Ph.D. student in brain and cognitive science at Temple University, he is exploring the concept on a broader scope.

Sazhin began soaring on the eve of his eleventh birthday when he followed his brother to the airport to help crew. “My older brother was the one who was born to fly in my family,” he said. Sazhin may not have looked up at airplanes and studied birds, but a blend of natural talent, a desire to continually improve, and a knack for intense studying have made him fly like one.

Most glider pilots treat Schweizer two-seat and single-seat gliders as stepping stones to the high-performance glass ships with 50:1 glide ratios. Sazhin prefers the modest gliders, and he delighted the small community of Schweizer 1-26 lovers when, in 2013 at only 18 years old, he won the national 1-26 competition with a teammate. He won it solo the year after, and repeated the feat with a teammate in 2015. “My heart is set on the 1-26,” he said. “If you just want to go up and get enjoyment from flying, you can’t beat the 1-26.”

He’s also found success with cross-country flying, setting world records for distance flying. In 2016, Sazhin flew the 1-26, an aircraft with only a slightly better glide ratio than a Boeing 777, more than 541 nautical miles. “As a sportsman or athlete, you know when you’re performing well and it’s fun to get in that zone. That’s where I want to be.” He’s one of a few dozen pilots to earn all three of soaring’s diamond badges in a 1-26.

Most athletes want to win championships, and Sazhin certainly has his sights on a good result when he represents the national team in France this summer. But, ultimately, his goals are focused on his personal results. “It’s not about beating someone. It’s about doing better than I did before,” he said.

Well, that, and the chance to study the decisions other competitors make. Sazhin loves competitions, in part, because he has a captive group of pilots all facing the same task, all being thrown the same variables, with each making different decisions. It’s a researcher’s—and a pilot’s—playground.

Favorite aircraft: The Schweizer 1-26 for its simplicity and direct connection to the art and science of soaring. His Windward Performance Duckhawk ultra-high performance mid-wing speedster is a close second.

Extra: Sazhin says that soaring is part science, part art, and that pilots who are most successful at it expertly and equally blend the two aspects. “The act of soaring and the way you pull the energy out of the air is very much a feel thing,” he said.