Discovering a talent for teaching

Flight instructing was a steppingstone for Sergio Ramirez on the way to becoming an airline pilot. 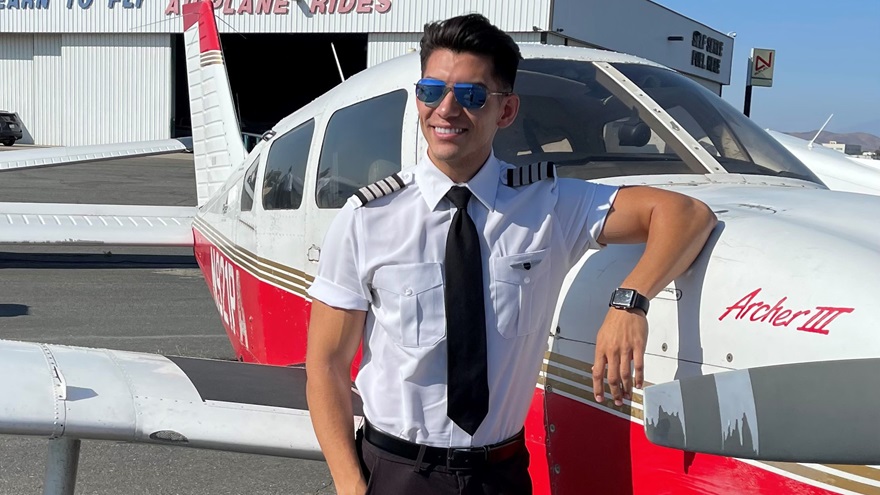 But he discovered along the way that he has a talent for teaching and enjoys seeing his students accomplish their own flying goals, and he intends to continue flight instructing in the future outside of airline flying. Ramirez was named best flight instructor in the Western Pacific region in the 2021 AOPA Flight Training Experience Awards.

“Flight instructing was something I believe came very natural to me,” said Ramirez, who obtained his own CFI rating at AeroGuard Flight Training Center in Temecula, California, and then taught there before landing a job as a pilot for a regional airline. “As a flight instructor, I simply translated to my students what techniques and ideas worked best for me.”

When students struggled, he resolved to find a way to help them.

“I never gave up on my students and am a firm believer that a student’s success is a direct reflection of their instructor’s skill and knowledge.”

One of his former students praised Ramirez for instilling pride, helping the student look beyond the next test and the next checkride, and making the process enjoyable.

“He gave me confidence that I was being trained first and foremost to be a good pilot, not just a good test-taker,” the student wrote in recommending Ramirez for the prestigious award. “Sergio knows a healthy balance between emphasizing how serious one should take their piloting skills, but never lost the ability to impress upon us how wondrous and special what we get to do is. He kept it fun.”

Ramirez emphasizes absorbing aviation knowledge that can last throughout a long lifetime of flying.

“An instructor who cares about the success of their students and challenges them and holds them to a high standard will also understand how the material will be utilized throughout an entire career,” he said.

Ramirez said he was always interested in aviation but thought airline pilot careers were reserved for former military pilots. He looked into becoming a flight attendant, and it was only then that he realized a career as a pilot was a possibility to him as a civilian.

He took out a loan for his aviation education and told himself that, if approved, he would pursue an airline pilot career.

He was recently hired by a regional airline serving United Airlines, and he’s in the midst of intensive training there. He previously studied at Mesa College in San Diego.

Ramirez intends to return to flight instructing at the airline as an evaluator of fellow professional pilots, or as a sideline to his airline career.

“I do plan to continue instructing,” he said. “Teaching a student something new and bettering the skills and knowledge of the aviation community is something—I find it both challenging and enjoyable. My career goals do include becoming a line check airman in the airline industry and becoming a mentor, role mode, and a figure of perseverance and hard work.”