Within minutes after takeoff, the pilot of the Cessna T210 began dealing for the second time that day with an in-flight mechanical problem. According to published reports, the pilot a short time earlier had diverted to Clarion County Airport in northwestern Pennsylvania to investigate an oil pressure issue during his flight from Westchester County Airport in New York back to his home in Akron, Ohio. He reportedly took off again a few minutes later into the dusk of November 24, heading across the dark rural landscape, climbing only to 4,000 feet. Nineteen minutes later and after reporting mechanical issues to air traffic control, he crashed just 1.5 miles short of the Grove City Airport. The pilot died at the scene. His passenger died a few days later in the hospital from burns and inhalation injuries. 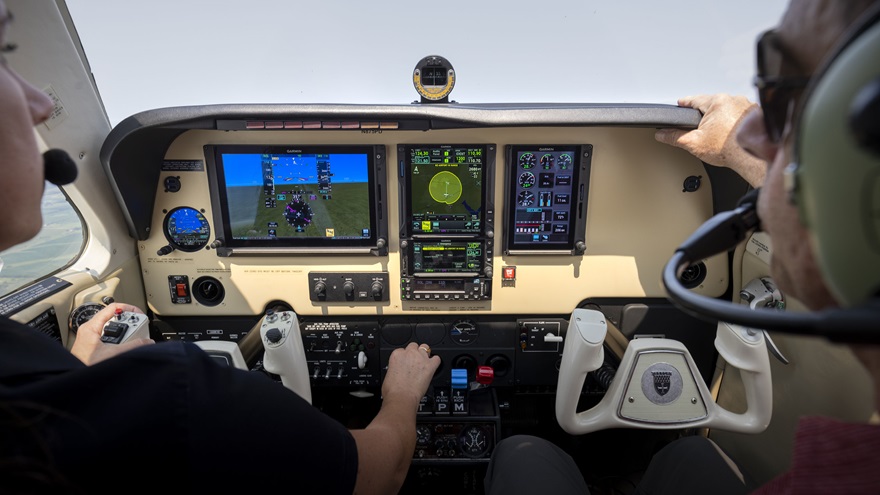 What makes the accident particularly frustrating is how close the pilot was to making it to the airport after an engine failure. Perhaps with just a little more situational awareness or a little more performance he could have made Grove City’s 4,500-foot runway perfectly aligned with his glide path. What if he had just a little more help? A button that might have immediately engaged the autopilot, pitching for best glide speed while navigating him to the nearest airport within gliding distance. Or a system that might have alerted him that the airport was not within his gliding distance, allowing him to focus on some other potential landing spot.

The accident is one that might have turned out differently had the airplane been equipped with the new Smart Glide feature offered by Garmin.

Smart Glide is a free software upgrade to the Garmin GTN 650Xi or 750Xi paired with one of the company’s common primary flight displays or attitude and heading indicators, including the G500/G600, G500/G600 TXi, GI 275, G5, and G3X Touch for certified or experimental aircraft with software version 8.90 or higher. While Garmin doesn’t charge for the software upgrade, your dealer may charge a labor fee to install it. A Garmin GFC 500/600 autopilot and datalink weather help improve the performance of the system.

Garmin describes the system as one that aviates, navigates, and communicates—something all pilots are taught to do in the case of an emergency.

From an aviate standpoint, with the push of the Smart Glide button, the system activates the Garmin GFC autopilot in Indicated Airspeed mode for best glide as published by the aircraft manufacturer; if the airplane is not equipped with a GFC autopilot, the pilot must activate the autopilot manually and choose an appropriate mode—IAS if available, otherwise vertical speed.

For navigate, the system confirms airports within glide range and sets a direct-to route to the best choice based on winds, terrain, and other criteria. At that point, the GFC system switches to navigate mode to that airport, including changing the CDI to GPS. Those without a Garmin autopilot must ensure the system is in the appropriate nav mode.

For communicate, the system brings up a box volunteering the emergency 7700 squawk code, puts the CTAF or tower frequency for the airport in the GTN com radio’s standby position, and displays basic information necessary to make a radio call—name of the airport, distance, and runway information.

While that represents the basics of the Smart Glide system, there is much more to it. The choice of airports is prioritized based on airport type (public and military airports are prioritized over private airports), estimated altitude above ground level upon arrival at the airport, reported weather (if datalink weather is available), and runway length. Once the pilot activates Smart Glide, the GTN display is decluttered to remove charts, fuel and nav rings, intersections, and other non-pertinent information. An altitude label is placed over the airport, indicating the estimated altitude above ground level when reaching the field.

Smart Glide navigates the airplane toward the center of the airport and announces “Approaching airport” aurally and visually when four nautical miles from the airport. At two nautical miles it prompts “Maneuver and Land.” At that point the pilot is expected to disengage the autopilot and land the airplane. 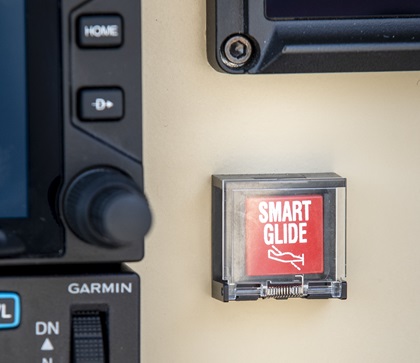 That’s great, but what if there’s no airport within gliding range? At that point, a touch of the Smart Glide button still activates the GFC autopilot in IAS mode for the stored glide speed while descending straight ahead; volunteers the emergency squawk; places the emergency frequency of 121.5 MHz in the standby position, and provides above ground callouts at 2,000 feet, 1,000 feet, and 500 feet. All of that frees up the pilot to immediately begin looking for a suitable landing site, knowing the glide is being efficiently handled.

Smart Glide can be activated by an optional dedicated red, guarded switch on the panel or by holding the Direct To button for three seconds.

Smart Glide builds on the Autonomi family of autonomous flight technologies infused into various Garmin products in the past few years, including Autoland. Autoland is quite different, though. It is designed to get a working airplane to a safe runway when the pilot can’t because of incapacitation. Smart Glide is designed to assist the pilot in bringing a sick airplane to the nearest practical runway.

Even in nonemergency situations, the Smart Glide system is busy providing visual information about the airplane’s glide performance. A yellow ring on the GTN’s moving map outlines how far the airplane could glide based on altitude, wind, and terrain.

During a recent flight in Garmin’s Beechcraft A36 Bonanza, I had the opportunity to see Smart Glide in action. A few miles southwest of Garmin’s home field, New Century Aircenter Airport near Olathe, Kansas, demo pilot Jessica Koss positioned us in an area with several airports nearby and then asked me to hit the dedicated Smart Glide button.

Smart Glide immediately indicated Amar Farms Airport, at 4.7 miles away, was the nearest airport. It activated the GFC autopilot in Indicated Airspeed mode at 110 knots and GPS navigation mode and turned us toward it. Because Amar Farms is a private-use strip with no published frequency, the system volunteered the emergency frequency in the GTN 750’s standby position and volunteered the emergency transponder code of 7700. A “sign post” next to the airport icon showed that we would arrive over the airport at 420 feet above ground level. With us at 2,040 feet agl and at 3,000 feet msl, the airport was just inside the yellow ring showing the limit of our glide range. The GTN 650 display noted Smart Glide was active and showed the airport name and runway information, as well as buttons to choose an alternate airport and another to cancel Smart Glide.

When looking at the moving map, Gardner Municipal Airport appeared closer, but, with an 11-knot wind from the southeast, our headwind component in that direction would have been enough that we would likely not make the field, given how close it was to the edge of the glide envelope. While a pilot eventually might be able to make such an assessment as well, Smart Glide did it immediately, freeing up the pilot to focus on other tasks, including troubleshooting, at a time when seconds matter.

In reflecting on the Pennsylvania accident, one can’t help but wonder whether a more timely decision and exacting glide performance might not have made the difference necessary to save two lives. Complete engine failures are rare, but they do happen. Smart Glide would surely be a welcome aid in the cockpit during those times.

Editor in Chief
AOPA Editor in Chief Tom Haines joined AOPA in 1988. He owns and flies a Beechcraft A36 Bonanza. Since soloing at 16 and earning a private pilot certificate at 17, he has flown more than 100 models of general aviation airplanes.
Go to Thomas B Haines's Profile
Topics: Avionics, Technology