Get the app Get the app
Already a member? Please login below for an enhanced experience. Not a member? Join today
We will be performing maintenance on our systems Sunday, 5/22/2021, beginning at 12:00 A.M. ET and ending at 6:00 A.M. ET. During this time, you may experience intermittent service outages. We appreciate your patience.
News & Media Giving Back

Arizona is vast. It is the sixth largest state in the union and its desert-to-mountain landscape covers 113,998 square miles. Of its many spectacular natural wonders, it is the 1.2 million acres of the Grand Canyon National Park that commands the most attention. 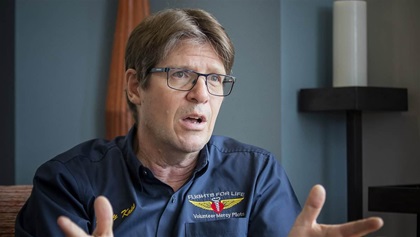 “We go fast, go straight, and get there quickly. We don’t get stuck in traffic.” —Jerry Kapp, president of Flights for Life 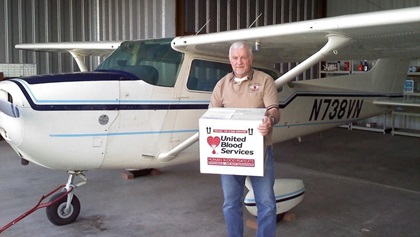 Homer “Mac” McClure was one of the founders of Flights for Life and was president and the face of the organization for many years when, on August 2, 2016, his 887th mission for FFL, he crashed and was killed near Flagstaff. A former FAA regional administrator in Oklahoma City, McClure was well respected and beloved throughout the aviation community. The Mac McClure Legacy Award was created in 2016 to honor an organization for outstanding service to Vitalant, formerly United Blood Services. It is named for Mac McClure because of his significant contribution to Vitalant and the community blood program. The award is presented annually in February at the Vitalant Valentines for Life luncheon with more than 500 in attendance honoring blood drive sponsors and their coordinators.

But there are 24 National Park Service sites here; 346 square miles of Petrified Forest National Park; 92,000 acres of the Saguaro National Park; the 1,998-foot-high escarpment known as the Mogollon Rim; and the one-mile-wide Meteor Crater. It’s a jaw-dropping, awesome, landlocked sea of natural beauty and wide-open wilderness.

Even though Arizona has a robust population—the fourteenth largest in the United States —most of the state is sparsely inhabited and concentrated in just three centers. The southern half comprises the state capital, Phoenix, and its southern neighbor, Tucson, and is the most populated at approximately 5.7 million. Northern Arizona, a surprising symphony of fir trees and dramatic mountain ranges, boasts another million, and the Native American reservations—including the nation’s largest, the Navajo Nation—account for hundreds of thousands more. But between here and there in Arizona is a whole lot of nothing but nature at its wildest, and if you need something quickly, general aviation offers a lifeline—or in the case of Arizona’s Flights for Life program, a bloodline.

According to the Community Blood Center of the United States, blood is needed every two seconds, and one in seven people entering a hospital need blood. However, only 37 percent of the population is eligible to donate blood, and only 10 percent of those who can donate do so annually. Platelets—the component of blood that helps clotting when there’s been an injury—are the most perishable of blood donations. They expire in five days.

“We go fast, go straight, and get there quickly,” says Jerry Kapp, president of Flights for Life of the transportation of blood via GA. “We don’t get stuck in traffic.”

When hospitals can be a five-hour drive from a blood center, cutting delivery time by flying makes a big difference. Phoenix is the hub for the donations and most flights originate at Sky Harbor International Airport or Deer Valley Airport.

Flights for Life pilots help save the lives of patients like the one who received 78 emergency transfusions at Flagstaff Medical Center when he was shot in a hunting accident several years ago. And the Joseph City resident who required seven transfusions when he underwent kidney and pancreas transplants after complications from Type 1 diabetes, said Sue Thew, communications manager for Vitalant, Arizona’s blood bank based in Phoenix.

“FFL allows us to provide blood components on a moment’s notice and get blood to places that are difficult to reach quickly,” said Thew. “We believe the pilots who volunteer for FFL walk on water.”

Thew says the service FFL provides saves her organization nearly $300,000 in transportation fees. Pilots donate their time, aircraft, and fuel. Vitalant takes the blood in boxes to the airfield where the volunteer pilot is based, the pilot straps his silent passenger in the airplane and flies it to distant airports in areas such as Flagstaff, Page, or on the reservations. The pilot simply takes the box to a waiting bench or designated spot where it is picked up by hospital staff.

“We only have eight hours for the blood to stay fresh after donation,” Thew said. “Extremely perishable, blood must be processed and separated into components within a matter of hours. The quick response time [of FFL pilots] allows Vitalant to maximize the number of components that may be derived from each unit of donated blood.”

Ray Reher volunteers for Flights for Life because, he says, he has an addiction. Not to anything dangerous, just to flying. And, when he retired after more than 40 years in the cockpit in the military and Southwest Airlines, he wasn’t willing to give it up. He met a fellow pilot on the field at Deer Valley Airport south of Phoenix who suggested he look into Flights for Life.

“I knew I wanted to use my skills and experience, maybe do some charitable work,” he said. “I wanted a sense of purpose.” He has been flying for FFL for more than 10 years and owns a Mooney M20K Encore.

Kapp says he started flying for FFL when he’d “flown to all the restaurants I could go to” in his Maule MX–7. He met Homer “Mac” McClure, one of the founders of FFL, and asked if he could participate even though Kapp had a taildragger. “Mac said, ‘I just have a [Cessna] 140!’” On one of his first flights, when Kapp landed in Cottonwood, a hospital worker in scrubs ran out to his airplane and grabbed the box of blood. “I found out later that the person was on the table, and everyone told me I saved his life. I don’t think I did, but it got me hooked.”

FFL was started in 1984 by four pilots “drawing on a napkin,” Kapp says. There are now 126 active volunteer pilots for the nonprofit organization, and it is expanding into New Mexico and Oklahoma. Kapp became president when McClure was killed in a crash on a flight from Flagstaff (see sidebar, next page).

Fred Gibbs is a retired FAA flight service specialist who joined FFL with McClure in 2008. He has more than 18,000 hours and owns a Bellanca Super Viking. “My FAA friend, Mac McClure, former director of the aeronautical center in Oklahoma City, living in Phoenix, was president of the organization and got me involved and I have been here ever since. Mac died in an aircraft accident one evening hauling a load of blood out of my airport here in Flagstaff. I try to follow in his footsteps. It is very satisfying knowing you are doing a good deed every day and possibly saving lives, plus the camaraderie within the pilot community is certainly worth it.”

Depending on the mission, volunteer pilots must have 100 hours of PIC time for day missions and 300 hours for night missions, and can rent or own. They need a current medical—BasicMed is OK—up-to-date insurance, and to check an online scheduling service to sign up for a flight. Pilots only fly VFR, no IFR flights are allowed. They are conservative because there is no need to jeopardize safety; Vitalant returns to pick up the box if issues such as weather or mechanical problems cause a pilot to scrap the flight. Then the blood is driven to the site.

“We never know what the blood is used for,” Kapp said. It’s a great excuse to fly the state. “I always think ‘we could turn this into a blood run’ when I plan a flight. Arizona is a beautiful state and there’s a lot of open space. It never gets boring.” And, he says, “the box never complains.

“Really, it’s just cargo. You’re doing something good for your community. You may never meet anyone you help, but it makes you feel good,” Kapp said.

“What’s not to like about it?” adds Reher. “We turn gasoline into noise for a good reason.”