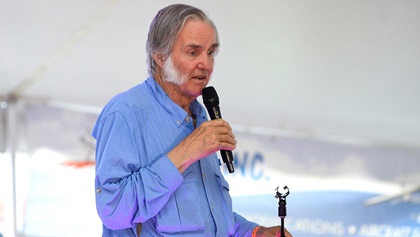 “While he was a very humble man, Bob Hoover radiated a remarkable spirit and overcame many obstacles in his life's journey to become an inspiring and motivating, innovative pilot—not the least of which was surviving (and escaping) a POW camp during World War II,” Baker said. “It's this spirit for adventure, and for giving back to the aviation community, why this award and this evening exists.”

Rutan was bestowed the highest honor of the night, the R.A. “Bob” Hoover Trophy for exhibiting “the airmanship, leadership, and passion for aviation” that Hoover had, as well as for having a “distinguished career as a pilot and aviation advocate while also serving as a source of inspiration and encouragement for current and prospective aviators.”

Rutan has designed 49 aircraft, including Voyager, which flew around the world in 1986 and SpaceShipOne, which put the first civilian astronaut in space in 2004. “His 138 combat missions are just one part of General McGee’s story,” Baker said. “He has been a trailblazer for generations of aviators. He has enabled thousands of enthusiasts to follow dreams— who might not have had a chance to climb into the cockpit.” 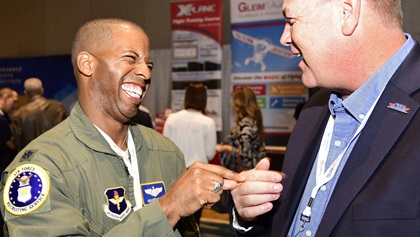 “We’ve been able to drive the general aviation safety accident rate down year after year thanks to people like Boris,” McSpadden said. Popov designed the whole-airframe parachute concept after he survived a hang gliding accident. Popov was hang gliding behind a boat when a miscommunication caused the boater to speed up instead of slow down, making the hang glider pitch up dramatically. Popov fell 500 feet and hit the water, knocking the fillings out of his teeth. He decided then to develop a parachute safety device to help prevent similar accidents. The concept expanded and was approved for ultralights and experimental aircraft. Later, it was approved for installation on certified aircraft, and now more than 30,000 GA aircraft are equipped with BRS parachutes. Cirrus was the first manufacturer to install the parachute as standard equipment on certified aircraft.