Get the app Get the app
Get the latest news on coronavirus impacts on general aviation, including what AOPA is doing to protect GA, event cancellations, advice for pilots to protect themselves, and more. Read More
Already a member? Please login below for an enhanced experience. Not a member? Join today
News & Media Lady of the lake

Getting a multiengine seaplane rating in Sky Harbor's grande dame

Hangar doors opened to a 1954 Beech 18 on floats, resplendent in white with nautical blue trim. The grande dame sheltered at Sky Harbor (DYT), a humming GA airport and seaplane base in Duluth, Minnestota, rooted on a spit of land between Lake Superior and Superior Bay. 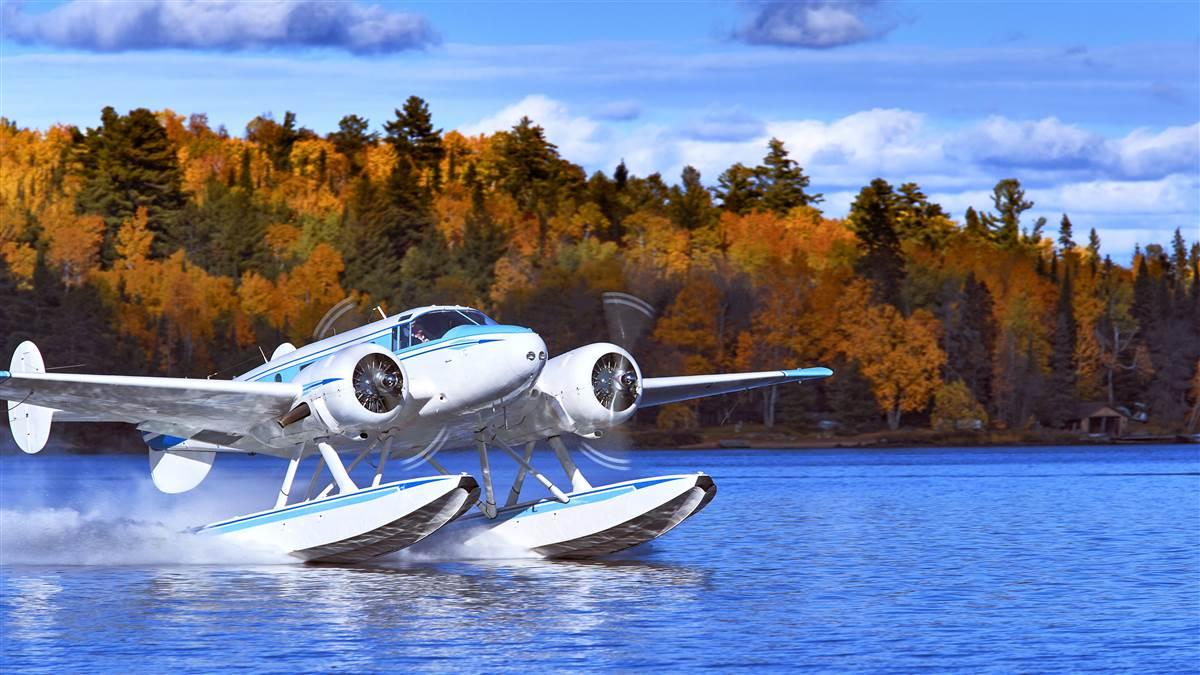 I was among a few fawning onlookers mesmerized by the legendary twin. Tom Sullivan, a multiengine seaplane CFI, waved me to join the passel of scurrying attendants, fussing over details of preflight preparation.

I was at Sky Harbor for Lake Country Air’s two-day multi-engine seaplane rating course. Lake Country’s training is only open to pilots with both a multiengine land and a single-engine seaplane rating. The program focuses on the exclusive experience of flying one of the most iconic twins ever built, only a handful of which are on floats. The MES isn’t the main draw to Lake Country’s program; anyone looking to notch ratings can find more practical alternatives. Lake Country’s program is for the romantics, the adventurers, and those willing to pay $8,775 for five hours of inimitable flying.

Sullivan, my instructor for the weekend, is a 25,000-hour GA pilot. He’s instructed in N33JP since 2012. Early in his career, he set sales records at Cirrus Aircraft that remain unbroken. He’s got a fun, energetic way about him. I quickly grasped his success in sales. He likes people and loves to fly. More than anything, he wanted me to savor the incomparable experience of flying a Twin Beech off the water. I did, thanks in part to his unobtrusive instruction that stood watchful guard while I did all the flying, from the first engine start.

Doug Haala, an A&P/IA who’s maintained this particular Twin Beech for some 36 years, led an extensive preflight, then Sullivan and I climbed into the cockpit via a custom hatch just above the pilot seats that I found easier and more fun than the typical rear cabin door. After a couple of dry run-throughs I flipped primer, starter primer, starter, and then—following a few propeller swings—turned on the mags and coaxed the throttle. I smiled at success with the Twin Beech’s notorious “three-handed” start, which created one of the most enjoyable sounds in aviation: an awakening radial engine. We kept the oil bypass doors closed while the engines idled and the oil warmed, which took some 20 minutes on a temperate October day.

We shut down and Carl Nephew, Lake Point’s smiling line agent, towed us to the water ramp. A commercial-rated college student, he’s in pursuit of ratings so he can join the pilots who fly Lake Country’s classic radials for hire. Nephew’s the kind of person you’re happy to see coming up the ranks in GA. He eased us down the launch ramp and the 8,725-pound Twin Beech floated off the trailer effortlessly. I recranked the engines, and my first surprise was how maneuverable the Beech 18 is on the water. Effective water rudders and differential power allow for excellent water taxi control.

We idled to the takeoff point, radials chugging, running pretakeoff checklists, scanning the area for water traffic, and managing shutter doors to optimize oil temperatures—a process that continued throughout the flight. Watching sideways, Sullivan suggested we not worry about carburetor heat in these temperatures. I knew enough about Pratt & Whitney R-985s on Beech 18s that I didn’t take the bait. We pulled on carburetor heats, and both engines coughed from ice discharge. The air intakes underneath each engine, directly over the water, draw moist air to the carburetors, increasing the potential for carb icing on the water. The fun, impressive demonstration was a hallmark of Sullivan’s instruction.

I set approach flaps and steadily pushed the throttles to 35 inches manifold pressure, less than full throttle to preserve engine life. Even on floats, at our weight, the Twin Beech didn’t need all 450 horsepower from each engine for takeoff. The nose rose considerably as the EDO 7850 straight floats plowed the water. Sullivan gave me a reassuring nod, indicating all was normal. Visibility over the nose was poor, similar to the Beech’s ground posture on wheels, but after a few seconds the nose began to lower as the floats planed. I relaxed back-pressure to hunt for the optimum planing attitude, a sweet spot noticeable by smoothness and acceleration. After 15 seconds and about 2,500 feet of water run, I banked slightly leeward to unstick the upwind float, and the Beech lifted crisply off the water at 80 mph. The takeoff was smoother and easier to fly than a Super Cub on amphibious floats.

Shortly after takeoff I leveled and accelerated beyond VMC (107 mph), then initiated the first power reduction—carb heat on for a few seconds of preventive heat. I began a climb at 115 mph, retracted the flaps, and initiated the second power reduction—manifold pressure to 30 inches and rpm to 2,000.

Out of the water, it was just a Beech 18 with more drag and fuel burn, but the core characteristics remained. Floats didn’t affect the Twin Beech’s legendary characteristics: aesthetically beautiful, aurally soothing, physically stable, and predictable. It was smooth on the controls, balanced with control pressures that felt just right—meaning not too heavy, which I had expected. Responsiveness in pitch and roll matched what I intuitively expected when I moved the yoke. Such is a characteristic of a “true” flying airplane, a frequent adjective used to describe the Beech 18.

We cruised north to Scott’s Seaplane Base on Crane Lake in northern Minnesota, which gave me an hour or so to get comfortable with the instrument scan and enjoy the stunning fall scenery, framed through the Beech’s cockpit. En route I managed the radial engines, which insisted on frequent primping. The radials grumbled at each other slowly, back and forth. I refereed them with rpm levers, coaxing agreement—a process I fiddled with the entire weekend.

With 28 inches of manifold pressure and 1,800 rpm, we cruised at 135 mph burning 50 gallons per hour, some 65 mph slower than a Beech 18 on wheels. Occasionally we activated preventive carb heat and adjusted oil shutter doors to manage the narrow oil temperature targets for optimum engine operation. While fidgeting with the engines, I flew the stable Beech easily in cruise with small inputs to the large elevator trim wheel at my right hip, which allowed precise altitude control and a smooth ride.

On downwind for our first landing, I selected approach flaps once below 120 mph, and turning base used preventive carb heat for a few seconds. On final, 110 mph felt about right to stay above VMC until landing was assured, then 100 mph. “From here,” Sullivan coached, “just feel it and fly it.” A typical water landing in the Twin Beech is much like a glassy water landing in other floatplanes but with a slightly steeper descent. I managed power and pitch to descend steadily to the water at about 400 feet per minute. Once in ground effect, I started a slow, continuous power reduction with steady aft yoke, and the floats sliced the water gracefully. The Twin Beech can be “greased” on water landings because of excellent control authority throughout the flare and touchdown, and large floats that slip into the water. The touchdown and water transition were much easier and smoother than flying a Super Cub, my previous seaplane ride.

We worked on taxi techniques between landings. The EDO 7850 floats aren’t connected by spreaders and side loads are especially worrisome, since each float is independent. Turns during high-speed, planing taxi are delicate, especially with any wave activity. Docking takes some room because of the long wingspan, but speed control is easy by sequentially working power, carb heat, magnetos, and cutting the engines in succession approaching the dock.

We fueled at Scott’s, a quaint seaplane base used for decades as a last fuel stop before crossing the Canadian border. Fueling any seaplane on the water requires some sea legs. Trapeze skills are helpful to top off the Twin Beech’s nose tank, placed forward of any comfortable reach from a solid wing hold. Wing fuel tanks are easy enough to access, once you climb out the cockpit hatch onto the wing. Legend has it that you’re not a real seaplane pilot until you’ve dropped your keys or something expensive in the water. I joined the ranks of the fully inducted by dropping my favorite pair of sunglasses as I ambled across the fuselage to the outboard wing.

The second and final day was checkride day. We stayed near Duluth for checkride practice and splashed around Superior Bay amid the iron ore docks made famous by Gordon Lightfoot’s somber ballad. Late that afternoon, FAA designated pilot examiner Geary “General” Padden arrived. Competent, confident, and engaging, he seemed delighted to be in the Beech again, which he flies frequently. He’s an ATP-rated airline captain, a retired fighter pilot with Navy and Air Force experience, and has a few thousand hours in multi-engine seaplanes. He got down to business with the oral exam. I stumbled on a buoy question, and he picked at that topic a bit before we moved on. He quizzed me on seaplane basics and engine failure response in the Beech 18. After a little more than an hour he was satisfied, so we stepped to the airplane and launched.

Since I’m multiengine rated and single-engine seaplane rated, two takeoffs and two landings would suffice—if all went well. I didn’t do anything “dumb, different, or dangerous” and flew the Twin Beech as Sullivan and I had practiced. After the second landing, Padden advised he’d seen enough, but I could keep flying. I was tempted; it was so much fun, but it was still a checkride. And as long as Padden was on board in his DPE capacity, the checkride was still in progress and a small mental mistake could ruin the day. It took some discipline, but I reluctantly passed.

A direct tailwind made it easy to line up with the ramp. We kept a little speed and added a smidge of power to beach onto the wooden trailer Nephew had waiting. He attached cables to the bow of the floats and activated a winch that pulled us completely out of the water and onto the trailer. The entire process took five minutes.

The Twin Beech, having graced her subjects, retired for the evening. The local crew offered beer from the nearby hangar refrigerator, and I tried to absorb the entire experience, made special by an enjoyable group of talented pilots who seemed to delight in sharing their love of one of the most unique flying experiences in GA.

I booked my trip with an extra day for weather contingencies, which allowed me to loiter on the Sky Harbor ramp the next day, helping Nephew launch and recover a few Beaver flights carrying tourists. When the Twin Beech emerged, I scurried over to help, now proud to be one of her humble attendants. Sky Harbor was tough to leave, and so I lingered, chatting with Alex Vickory, a 31-year-old United Airlines captain, A&P/IA, and one of Lake Country’s owners. Wearing shorts and flip-flops in 60-degree weather, tanned, with dark sunglasses spearing thick, unmanicured hair, he threw more California surfer than ATP-rated instructor. Vickory’s comfortable demeanor and his understated, yet clearly evident joy in flying and teaching in Lake Country Air’s iconic radial airplanes perfectly reflected the essence of the entire experience at Sky Harbor.

There are certainly more practical ways to achieve a multiengine seaplane rating. It’s hard to imagine one as enjoyable.