Get the app Get the app
News & Media Mentor Matters: Automated callouts, shakers, and pushers

Stall warning systems in light pistons are often given little to no thought. A diligent pilot may preflight the small tab that flips up at high angles of attack to trigger the stall horn, but given the overall simplicity, the system doesn’t do much more or require more understanding. 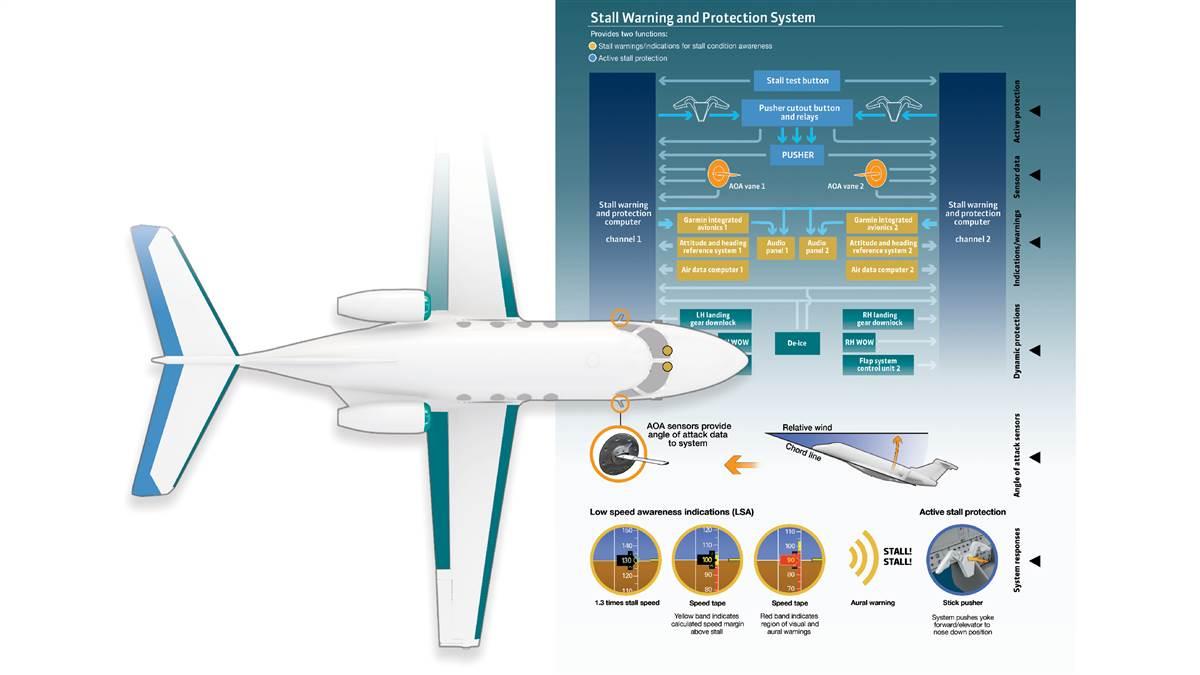 Illustration by Charles Floyd
Click on image to enlarge

Further, while the same aerodynamic truths hold for all airplanes, the finer points of how variations in loading and load factor affect stall speed can be understandably lost on the piston pilot. For most trainers, two stall speeds are memorized—one with landing flaps, one for a clean wing—with no additional thought.

To contrast this situation, ask a jet pilot what the stall speed of his aircraft is, and you’ll almost certainly be met with a blank stare. Manufacturers don’t publish a single stall speed, or even several, as jets operate in a wide weight range—so wide that the full spectrum of possible stall speeds can span 30 knots. Given this range, a dynamic system to alert pilots of an impending stall is needed. These envelope protections systems are highly complex, composed of multiple sensors and computers, and may even directly interface with the primary flight controls.

All the components of a stall warning system depend on an angle of attack (AOA) sensor. For most light jets, the AOA sensor is a weather-vane type, free to pivot 360 degrees so that it always aligns with the relative wind in flight. A light jet that only requires AOA sensing for stall warning might feature only one AOA vane, while one that has active stall protection will typically have an AOA vane on each side of the aircraft for side-slip averaging and redundancy. Some of the newer light jets dispense with AOA vanes entirely, featuring instead a “smart probe” that combines pitot and static pressure measurements with precise AOA measurement, all in one instrument resembling a conventional pitot tube.

As recovery demands a strong nose-down input, if a T-tail aircraft enters this “deep stall” condition it may become trapped in an unrecoverable stall.Because an AOA sensor only measures the angle between the relative wind and the longitudinal axis of the aircraft, some computing is required to convert this raw information into a proper angle of attack—the angle between the relative wing and the chord line of the wing. Most important, inputs from the flap position sensors are fed into the stall warning system so the system can understand the relative position of the wing’s chord line to the longitudinal axis. Other inputs are used as well, such as landing gear position, Mach number, and icing system activation status. All these contribute to further refining the accuracy of the AOA measurement and the wing’s proximity to the critical angle of attack.

As the AOA reaches a predetermined margin below the actual stall—which typically equates to 10 to 15 knots in level flight—the airplane’s stall warning feature will engage. While some smaller jets such as the Citation Mustang use a horn noise similar to what might be found in a piston, more common is an aural “stall, stall” voice or a stick-shaker. As the name implies, the stick-shaker system has a small electric motor mounted on the control column that, when activated, causes the entire control column and yoke to vigorously shake in an unmistakable manner. The stick-shaker and voice systems have the advantage of unambiguously announcing the impending stall; a horn-based system may be confused with other warning horns in the cockpit during a high-stress event.

Before stall warning is reached, light jets with modern, integrated glass cockpits will provide advanced notice of the stall’s arrival through a low-speed awareness display on the primary flight display. Driven by the same AOA sensing, the angle of attack that corresponds to stall warning activation is converted into an airspeed and prominently drawn on the airspeed tape as a red bar. This red range will dynamically redraw as conditions affecting stall speed change—when load is changed (entering a turn, for example, or pulling up sharply), flaps are extended, or when altitude and icing conditions vary.

Some light jets have an aural early warning of decaying speed. The Embraer Phenom 100 and 300, for example, have voice callouts that says “increase speed, increase speed” if, without flaps deployed, the aircraft reaches an angle of attack equivalent to roughly 20 knots before stall warning. This is a huge help in single-pilot operations where inattention during level-offs can quickly lead to dangerous airspeed loss.

Jets with a T-tail—the horizontal stabilizer atop a vertical stabilizer—may be subject to a dangerous aerodynamic effect; if susceptible, theses airplanes require another component in the stall protection system. With a T-tail, it’s possible that at very high angles of attack the disturbed airflow over the top of the wing can blanket the horizontal stabilizer and render the elevator and pitch control ineffective. As recovery demands a strong nose-down input, if an aircraft enters this “deep stall” condition it may become trapped in an unrecoverable stall.

This situation is clearly unacceptable, so preventing the aircraft from ever reaching a stall angle of attack is an absolute must. Enter the stick pusher. At a set angle of attack approaching that of an actual aerodynamic stall, the stick-pusher system will physically shove the control yoke forward abruptly, typically with 100 to 150 pounds of force. This prevents an unrecoverable deep stall. Aircraft with a stick pushers have stall warnings and low speed awareness margins determined relative to pusher activation speed; the concept of stall speed isn’t relevant because it should never be reachable.

As even small amounts of leading-edge ice have been shown to greatly increase an airplane’s stall speed, newer jets often tie the ice-protection system into the stall warning logic. Once the wing ice protection is activated, the stall warning system lowers the AOA’s stall warning trigger and, if equipped with one, the stick pusher’s activation threshold. As a result, the warning and/or pusher will occur at a higher speed, accounting for the presumed loss of wing effectiveness with ice contamination. This more conservative sensing will remain in effect until the pilot confirms the wing is entirely free of ice and resets the system.

Understanding the fundamentals of the envelope protection system is critical, as there are ways in which component failure may place the airplane at elevated risk. A stuck AOA vane, for example, could lead to a false stick-shaker event right after takeoff. Pilots who have experienced this have found it understandably disorienting. Hours of simulator and aircraft training have ingrained the need to lower the nose when faced with a stall warning, yet with an erroneous stall warning event this instinct must be ignored. The opposite problem—an AOA vane stuck at a low angle of attack—has led to near catastrophe, resulting in a jet pilot experiencing an aerodynamic stall and loss of control with no warning whatsoever.

Aircraft with a stick pusher typically feature multiple ways in which the system can be disabled should it inadvertently activate. Often, it’s a quick disconnect button on the yoke that must be pushed and held down while a switch on the instrument panel—to permanently disarm the pusher—is located and activated. Given the disastrous implications of an improper stick pusher activation at low altitude, pilots of jets and turboprops equipped with such systems must be particularly alert on takeoff and landing, and ready to intervene if the pusher’s “help” suddenly turns dangerously unhelpful.