Get the app Get the app
Get the latest news on coronavirus impacts on general aviation, including what AOPA is doing to protect GA, event cancellations, advice for pilots to protect themselves, and more. Read More
Already a member? Please login below for an enhanced experience. Not a member? Join today
News & Media Never Again: Pop quiz

Be ready when one comes up

We all make management decisions from the mundane (such as being on time, which is good) to the critical (like stepping in front of a freight train, which would be bad). 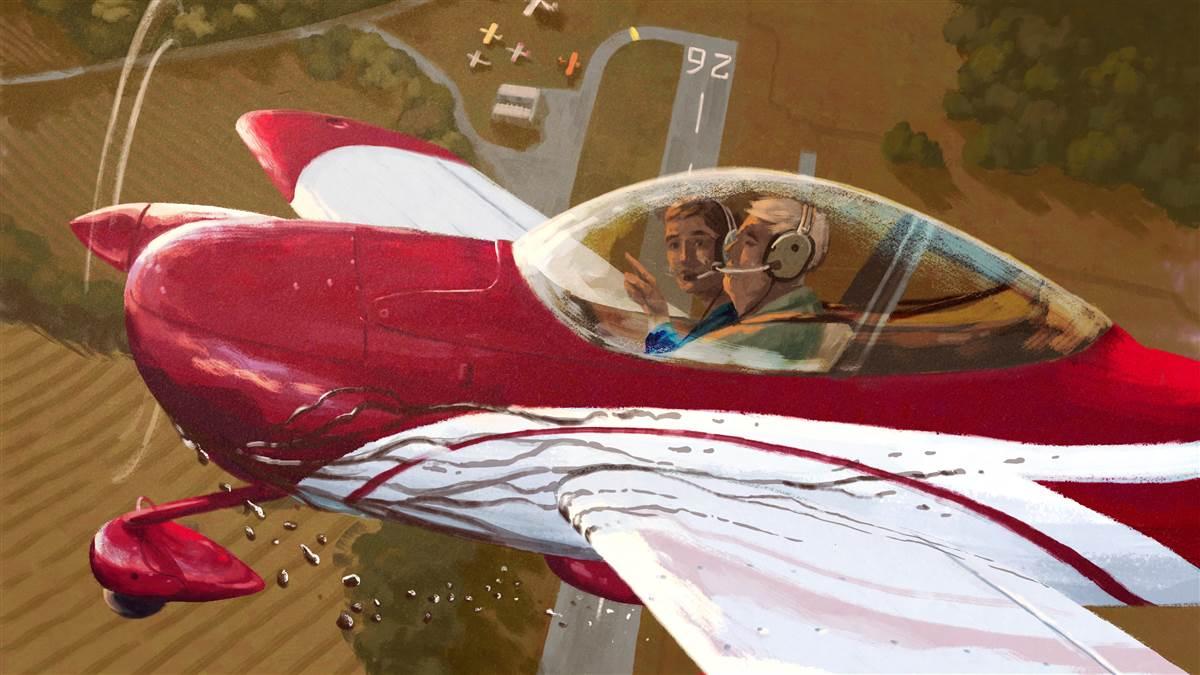 They’re a part of our daily routine. However, life has a knack of throwing any of us a curveball at any time, which could be considered the equivalent of a managerial pop quiz. It’s something that happens when you least expect it, and sometimes at a scale that could end your life—or someone else’s.

One particular pop quiz started for me about 30 seconds after leaving my home airport in a Vans RV–12, an airplane I was to be checked out in the next day. “I smell gas,” I said as an odor of gas wafted up my nose. I was in the right seat and getting a preview of the airplane I was looking forward to fly that wasn’t a Cessna.

“I don’t smell anything,” dismissed the CFI (who we’re going to call “Frank”) in the left seat. Frank, who’s well into his 70s, was scheduled to check me out the following day. “But I do smell oil,” he said a few moments later.

And Frank was right. The smell of gas had morphed into an undeniable stench of burnt oil, followed by a blue haze that flooded into the cockpit. With the air vents quickly opened and oil pressure diving, we decided to set down.

Now, we all know what the prescribed course of action is—land the airplane. It is hammered into us from the beginning when there’s even a hint of engine trouble. Safety seminars, countless safety videos, the FAA, and my wife all reiterate the same thing: Put the wheels on the ground (preferably upright). Even the airplane’s operating handbook barks out the same gospel: Plan a “Precautionary Landing Approach” as complete engine failure is possible at any time.

And up ahead was a sleepy little airport with a short runway that was no wider than a country road, about a mile out and a couple of thousand feet down. It was the perfect safety net before the engine could seize into a boat anchor.

Instead, Frank hung a U-turn for home.

“We’re not landing?” I asked while watching the narrow strip of asphalt disappear under the wing.

“No….” Frank answered, followed by a muddling of words I would never be able to recite from memory, even under sodium pentothal. He had decided, as pilot in command, to return to our airport, which was a good five miles away. However, as far as I was concerned, it might as well have been 500 miles to an airplane with an engine that likely was bleeding to death.

The airplane had essentially rained lubricant on everything below our flight path until there was nothing left.Now, it’s fair that I share some critical context. I had just come back from a 24-year break from flying, with nothing more than a measly 260 hours to my name. Frank possessed more than 10,000 hours, making me a comparative Forrest Gump in contrast. So, with that in mind, I considered that, maybe, there was something he knew that I didn’t. Or perhaps, I had forgotten something within the rust.

I chose to bite my tongue and deferred my fate to Frank.

Before everyone starts throwing things at me, I do know that I didn’t make this decision in a vacuum. Yes, my instincts screamed land, but I weighed a few points in the fog of that moment.

Point one, Frank not only had thirty-eight times the hours I had, but he’d also been flying since before I was even born. So, the guy’s gonna know a bit more about flying than I do, right?

Point two, my father raised me with the mantra of respect your elders and those above you, which he would enforce with a painful thumb-thump to the top of one’s head (ask me how I know this).

In other words, I chose to cower in deferment within a perceived expectation that it was the right thing to do. But what I really did, instead, was completely flunk a pop quiz in critical decision-making.

In fairness to Frank, he weighed his own critical decision points. Did we still have a working motor? Kind of. Could we see our home airport? Yeah. Did we have altitude? Not a lot, but yes. All green lights to take a pass on the runway below us, even though he presumably knew better.

We did eventually make it back to the airport, but not before the motor seized with a soul-jarring clunk when it decided it had enough of running without oil a half-mile out. With a propeller blade frozen upward, Frank got us onto the runway, touching down just on the edge of the asphalt. It was my only, and hopefully never again, firsthand witnessing of a dead-stick landing. We coasted down the runway and bailed as soon as the 1,300-pound airplane rolled to a stop.

Once outside, we found streaked oil on the cowling everywhere forward of the wings. The airplane had essentially rained lubricant on everything below our flight path until there was nothing left, all caused by an inspection bolt that had worked its way loose and was not secured by a required safety wire.

With the clarity of being back on the ground, I knew Frank’s decision to push for home was irrefutably wrong. I tossed aside my father’s militant lessons of deference and pressed Frank on what he was thinking. Why did he risk returning to the airport when we had a perfect landing spot below us?

“We were too high,” Frank demurred, which we both knew was a load of excrement the moment he said it. He would later concede that he turned us around simply because “that’s where his car was.” Frank also admitted he would’ve landed at the little airport given the chance to do it again. The man knew he had made an error in judgment, and we were both lucky it didn’t turn out to be worse than it already was.

But that’s not the takeaway from this. In the end, we were fortunate that neither one of us met our untimely demise that day—not to mention the damage and harm that could have occurred to those below us. And although my instincts were proven correct, I was wrong for not pressing them. Admittedly there was little I could do beyond starting a fistfight for the stick, but that’s an extreme and dramatic perspective that pales against the one thing I should have said, with increasing volume: “Land the airplane!”

More important, I failed to manage upward. And I had done it out of an antiquated sense of polite deference and introverted passivity, thus making my error nearly as bad as Frank’s. Although I was rusty in the cockpit, that doesn’t absolve me of my responsibility as a pilot to make the right decision, even when I’m not a pilot in command. And while this is not an endorsement to start arguing with those you disagree with, it is an endorsement to find your voice and speak to what you believe, or know, is right.

Life is full of pop quizzes. Your life, and those of others, may depend on how ready you are for them.

Paul Locander is an IT executive, writer, and pilot based in Olney, Maryland.