Get the app Get the app
Get the latest news on coronavirus impacts on general aviation, including what AOPA is doing to protect GA, event cancellations, advice for pilots to protect themselves, and more. Read More
Already a member? Please login below for an enhanced experience. Not a member? Join today
News & Media Opinion: Savvy Maintenance
Sponsored by Aircraft Spruce

How mags work: The spark plugs in most piston aircraft engines are still powered by 120-year-old technology

Both the federal aviation regulations and their predecessor, the civil air regulations, require that certificated spark-ignition reciprocating aircraft engines—the kind most of us fly behind—have fully redundant dual ignition systems. 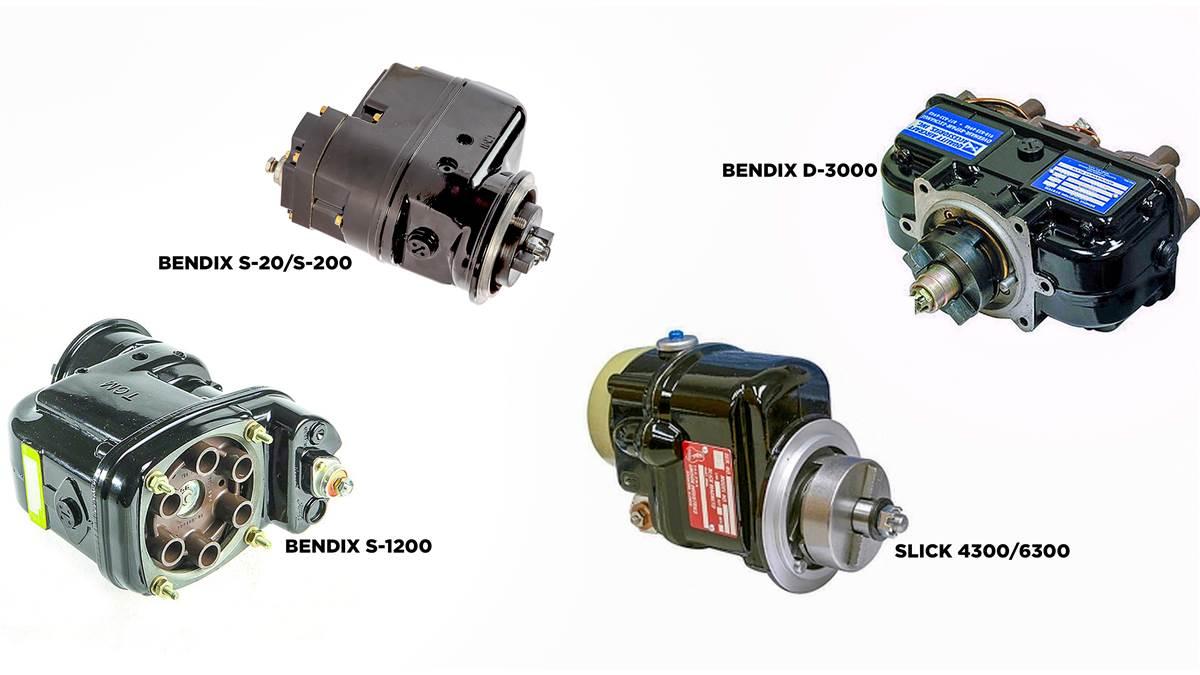 Part 33, Subpart C, states that “each spark ignition engine must have a dual ignition system with at least two spark plugs for each cylinder and two separate electric circuits with separate sources of electrical energy or have an ignition system of equivalent in-flight reliability.”

There’s a good reason for this: Ignition system failures are relatively commonplace. Without a properly functioning ignition system, the engine could quit, the airplane could fall out of the sky, and people could get hurt. Spark plug failures happen a lot, but the consequences usually aren’t serious—often they’re not even noticeable—precisely because we have two spark plugs in each cylinder, and one is enough to keep the cylinder producing power. Usually, the only sign that a spark plug has failed in flight is that the EGT on the affected cylinder rises by 50 degrees Fahrenheit or so. Unless you have an engine monitor installed and keep it in normalize mode, you’ll probably never notice. Often these failures are caused by crud getting lodged in the spark plug electrodes, and often those failures self-resolve. Even when they don’t, spark plug failures often aren’t caught until the next preflight magneto check, when the failed plug causes an excessive magneto drop.

Magneto failures happen less often, but when they do, the consequences can be much more serious—or not, depending on the failure mode. If the mag just quits cold—say, because the breaker points fail, the coil opens, or the condenser shorts—then the consequences are relatively benign: All cylinders continue to make power in single-ignition mode, all EGTs rise in unison, and you fly to your destination and get the bad mag fixed. No big deal.

A failure that affects the magneto’s timing can be a very big deal, particularly if the timing is advanced—i.e., the spark plugs fire earlier than they should. A mag that fires 5 degrees early can send CHTs right through the roof, and one that fires 10 degrees early can melt holes in pistons and cause cylinder heads to separate. Ugly.

The worst kind of mag failure—and one we’re seeing disturbingly often—occurs when the mag’s plastic distributor gear fails and starts shedding teeth. When this happens, the magneto can start firing random spark plugs at random times, and all hell breaks loose. The engine starts running change-of-underwear rough, and unless the pilot quickly throttles way back, the powerplant can start coming seriously unglued.

I counted six such magneto distributor gear failures during a two-year period in a fleet of roughly 300 piston GA airplanes. That works out to an average of one failure per year per 100 airplanes. To my way of thinking that’s a pretty scary failure rate.

That’s why the FAA requires that our engines have two magnetos. Even if one mag goes berserk, we’ve still got a healthy one to get us home, right? Don’t be so sure.

I investigated these six magneto distributor gear failures thoroughly. They happened to all sorts of pilots, ranging from newbies to veteran multi-thousand-hour CFIs, and they occurred in phases of flight ranging from pattern altitude to Flight Level 210. Not once did the pilot have the presence of mind to identify and shut off the misfiring magneto! That’s even true of the failure that occurred at FL210, where the experienced pilot had nearly half an hour to troubleshoot the issue as he was descending, power off, to an emergency landing. In every one of these six cases—high-time or low-time pilot, high altitude or low altitude—the pilot declared an emergency, pulled the power back to near-idle, and put the airplane on the ground at the nearest airport. Fortunately, all the emergency landings were uneventful. 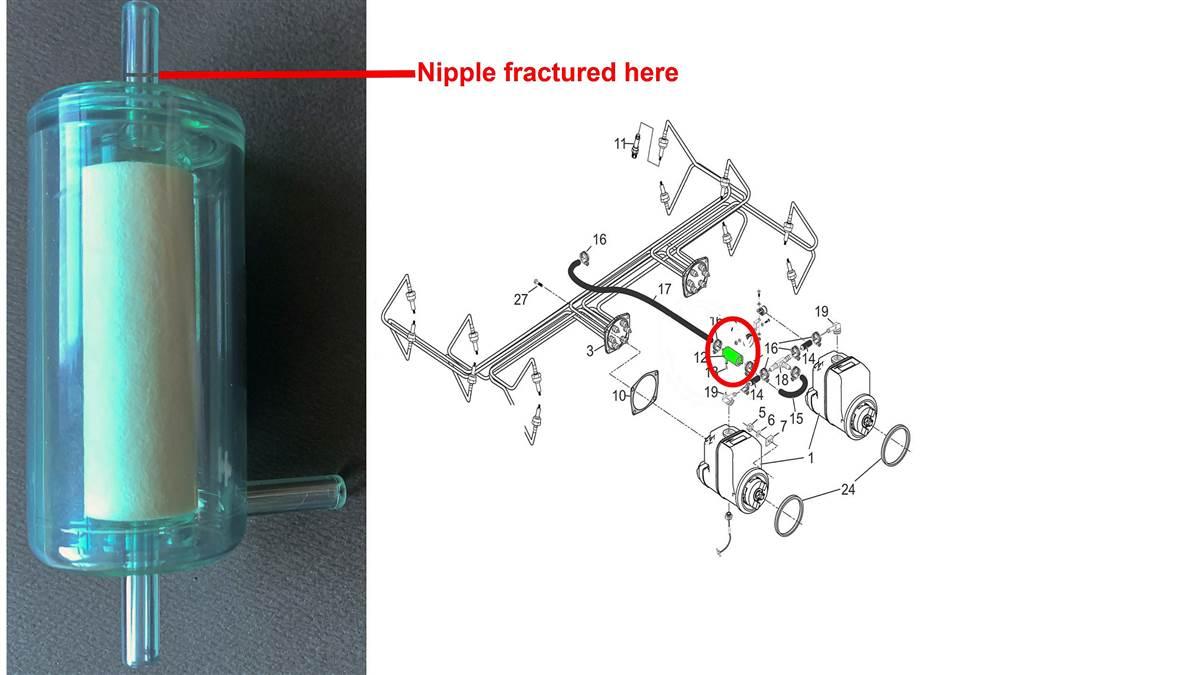 This little plastic magneto pressurization filter can cause a single-point failure of the entire ignition system at high altitudes.

Have a maintenance question? Submit your questions to [email protected] aopa.org/podcasts

Had these pilots been taught to deal with such a failure by identifying and shutting off the bad magneto, their engines would have resumed smooth operation and their airplanes could have continued uneventfully to the planned destination, at which point the bad magnetos could have been repaired or replaced. But none of the pilots did that. All treated the situation as a catastrophic engine failure. Not one attempted to troubleshoot or resolve the problem, something that easily could have been accomplished simply by shutting off one magneto at a time until the bad one was identified and disabled.

The Bendix D2000/D3000 dual magneto is used on many Lycoming engines. If your Lycoming engine model number ends in a “D” suffix—e.g., O-360-A1F6D or TIO-540-F2BD—it has one of these puppies installed. It’s two independent magnetos packaged into one box, with a single drive shaft, mounted on a single pad on the accessory case. The idea was to reduce the real estate and gear train complexity at the back of the engine. This probably wasn’t Lycoming engineering’s best idea. I’ve been struck by how many aircraft owners and mechanics have bad experiences with these dual mags, some declaring that they would not fly any single-engine airplane that was dual-mag equipped.

The original D2000 dual mag was horribly unreliable, and most of them have long since been replaced with the improved D3000. Although the D3000 has pretty much dual everything—dual breaker points, coils, distributors, and distributor gears—it still doesn’t provide the level of redundancy of two conventional magnetos.

One problem area has been the hold-down clamps that attach the mag to the engine. They have a history of coming loose—either because they were not properly torqued or because the magneto mounting flange or engine mounting pad was worn. When the clamps come loose, the dual mag can shift and that screws up the timing of both magnetos (not just one). Another single-point failure is the impulse coupling that drives the dual mag from the engine gear train. A dual-mag-equipped Lycoming engine has only one of these, rather than two. An impulse coupling failure can take out the entire ignition system.

Although the dual magneto complies with the letter of the FAA’s two-source requirement, I can’t help but wonder whether it meets the spirit of the regulation. It just doesn’t provide the same level of redundancy as two conventional mags.

As if this wasn’t bad enough, the dual mag is used only on Lycomings but was manufactured by Continental. In 2010, Continental discontinued manufacture and support of the dual mag, leaving owners of “-D” Lycomings in something of a pickle and dependent on aftermarket sources of parts to keep their dual mags alive.

Even with two conventional mags, it’s still possible for a common mode failure to compromise the entire ignition system. One such failure occurred to a client of mine who was cruising his Cessna 340 at FL240 when suddenly, the left engine came unglued and started shaking so badly that the pilot was worried it would tear itself off the wing.

He declared an emergency, requested a lower altitude, and started an emergency descent. After descending a few thousand feet, the left engine started running a lot better, so he continued at the lower altitude, landed safely at his home base, and asked his A&P to figure out what was wrong.

It didn’t take the mechanic long to find the cause: the 340’s engines’ Slick 6300-series pressurized magnetos. A tiny plastic nipple on the magneto pressurization filter had broken off, instantly depressurizing both mags and sending them into violent high-altitude misfire. When the mechanic removed both mags and opened them up, he found evidence of severe internal arcing. One of the distributor gears was badly burned and partially melted.

It strikes me as pretty dumb to have both magnetos sharing a single pressurization hose and a single plastic pressurization filter. This creates the potential for a single point of failure that can take out both magnetos simultaneously at high altitudes. Yet every pressurized magneto installation I’ve looked at—whether Bonanza, Cessna, or Cirrus—does it this way. Go figure.

Magnetos normally receive only a cursory inspection during annual or 100-hour inspections. The mag-to-engine ignition timing is checked with a buzz box and adjusted if necessary. Perhaps the breaker points are checked for condition (or perhaps not). That’s pretty much it.

Both Bendix/Continental and Slick/Champion recommend that their mags be removed from the engine and opened for a thorough disassembly inspection every 500 hours. Although the 500-hour inspection is not compulsory for Part 91 operators, Although I’m a big believer in doing maintenance strictly on condition rather than on a fixed timetable, there’s really no way to assess the condition of a magneto without taking it off and opening it up. And although I would normally consider a component that is part of a fully redundant system to be a run-to-failure item, it has become painfully clear that pilots don’t do well in the face of magneto failure modes that cause the engine to go berserk.

The 500-hour inspection provides an opportunity to inspect the magneto’s breakable plastic parts (such as the distributor gear), to replace various consumable items (such as the carbon brush), to lubricate internal parts (such as the cam, gear, and felts), to inspect the condition of the breaker points and reset the point gap to specifications, and to reset the mag’s internal timing (“E-gap”) to ensure that it generates maximum spark voltage. This is all stuff that is very much worth doing.

Some A&Ps have the knowledge, special tools, and inclination to perform these important 500-hour inspections themselves. Others prefer to send the mags out to a good magneto specialty shop. (I used to do my own 500-hour inspections, but these days I send mine out.) If your shop sends your mags out, make sure they ask for a 500-hour IRAN (inspect and repair as necessary) rather than an overhaul—there’s typically no need for magnetos to be overhauled except when the engine is undergoing a major overhaul.