Get the app Get the app
Get the latest news on coronavirus impacts on general aviation, including what AOPA is doing to protect GA, event cancellations, advice for pilots to protect themselves, and more. Read More
Already a member? Please login below for an enhanced experience. Not a member? Join today
News & Media Astronaut in an AirCam

Former astronaut Story Musgrave has looked down on Earth from orbit at more than 17,000 miles an hour, and he’s raced above it in supersonic NASA T–38s at 700 miles an hour. But the perspective he’s getting now is vastly different. It’s low, slow, and exquisitely detailed—and it comes at a mere 60 miles per hour from an amphibious AirCam Musgrave spent three years building with high school students in central Florida.

Story Musgrave and his AirCam 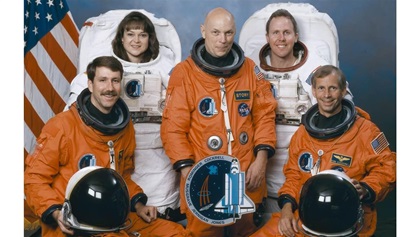 Musgrave recently began pursuing a multiengine seaplane rating—one of the few certificates he hadn’t obtained during more than a half century in aerospace.

“My head is swimming,” Musgrave, 85, said after his first hour aloft in the front seat of his AirCam. “Sure, it’s got a slow cruise speed, but things happen unbelievably fast. The takeoff on land or water only lasts a few seconds. And airspeed is relative. Flying a jet doesn’t feel fast when you’re at high altitude, and surface is a blur in a seaplane when you’re right on top of the water.”

Musgrave is an academic overachiever with multiple doctorates. He’s a surgeon, and a supremely accomplished pilot with instructor ratings in aircraft ranging from gliders to jets. He’s the only astronaut to have flown on all five space shuttle orbiters.

If Musgrave had only wanted a change of pace, he could have gone out and bought an AirCam. But understanding why he sought out a group of teenagers to build his airplane requires going back to Musgrave’s youth. The future astronaut was born during the Great Depression and grew up on a farm in western Massachusetts in what he calls a “profoundly dysfunctional” family. Musgrave left home in his teens without finishing high school and joined the U.S. Marines. The military recognized his intelligence and facility with machines, then sent him to Korea where he served as a crew chief on Douglas AD–1 Skyraiders during the Korean War.

“As a crew chief, that [Skyraider] was my airplane,” Musgrave said. “I did the preflight inspection. I set the switches, and I walked the pilot out and put him in the cockpit.”

The first time Musgrave set foot in a briefing room at age 18, the pilots laughed at the “mere child” who carried all that responsibility. And the fact that so many of the pilots Musgrave cinched into their harnesses never came back made a deep and lasting impression.

Those searing experiences, and technical skills, set Musgrave on a course for future accomplishment. Even though he hadn’t finished high school, he talked his way into Syracuse University, where he became an academic superstar. By exposing today’s youth to hands-on aircraft construction and leading them through the process of building and flight testing an airplane, he hopes to provide them with motivation similar to his own—without the heartbreak.

“To complete this airplane, they had to learn about design, engineering, and project management,” Musgrave said. “They learn teamwork and spirit. They’re on a project together, and they choreograph the whole process. Those are the same things I did at NASA, and throughout my professional life. And that brings a tremendous sense of satisfaction.”

Musgrave has taken up temporary residence in a hangar apartment at Lockwood Aviation in Sebring, where AirCam kits are produced. He makes his way down a wooden staircase at 7:30 a.m. with a stack of manuals and a travel mug brimming with coffee, then he sets them on top of one of the floats while preparing to climb into the cockpit.

“How you doing, Story?” asks one of the technicians.

Musgrave is wearing a clashing ensemble of brown shoes, light blue sweatpants, and a dark sport shirt. The tech teases him about his mismatched wardrobe but Musgrave is nonplussed. The hardcore engineer says he doesn’t care about fashion, and he drives a beater SUV, too.

“I care about airplanes,” he says. “Clothes and cars? Not so much.”

Musgrave settles into the AirCam’s semi-reclined front seat and starts reviewing checklists. He does so methodically, and he touches each button, knob, and switch in sequence. He’s already completed a maintenance course on the Rotax 912 iS engines that power his airplane, and now he’s learning the electrical and avionics systems.

He powers up the instrument panel and goes through every aspect of the Garmin G3x display. He makes notes and writes down questions in a journal as he does so. He also carries an oversized mirror so that he can see behind him when he activates the flaps or other flight controls, to see how they react.

“I’ve followed this process with just about every aircraft I’ve ever flown or worked on,” he said. “I’ve got to understand each system. Then I look at how the systems interact. I’ve also got to have manuals. If I don’t read it in a manual, nothing makes sense to me. That’s just the way my mind works.”

Musgrave’s first flights in his airplane took place with designer Phil Lockwood or another highly experienced AirCam pilot in the front seat and Musgrave in back, watching and taking notes. “I want to observe before I fly,” Musgrave said. “I need to understand what’s going on, and why.”

He’s also taking a seaplane ground school course. But unlike most pilots who focus on the checkride and want a minimal amount of training time and cost, Musgrave seeks to master the subject. If he knows the material well enough to teach it, the checkride is a formality.

“I’ve always been in love with airplanes, and in love with learning,” he said. “Learning about airplanes is about as good as it gets for me.”

Have fun and learn

Nicole Blount was starting her sophomore year at Lake Placid High School in Sebring in 2017 when another student told her about the AirCam construction project. No one in her family was involved in aviation. But Blount wanted to study engineering and signed up to help build the airplane.

“I assisted with the fuselage, wings, and the fabric covering,” said Blount, 17, who’s now preparing for her private pilot checkride. “Building the wings was probably my favorite part because they’re obviously so vital to the way the airplane flies.”

Blount’s parents supported her flying, and they assist with pancake breakfasts that help fund the local Experimental Aviation Association (EAA) chapter where the AirCam was assembled. The COVID-19 pandemic disrupted Blount’s in-person school schedule, but she’s continued her aviation training, and she works at Lockwood Aviation as an intern two days a week.

The construction program has attracted students from several high schools, and Blount said well more than 50 students have participated.

“The kids come from all sorts of backgrounds and have lots of different interests,” she said. “We get together, have fun, and learn. I came here not knowing what a rivet was—but people help you and show you what to do. Pretty soon, you can do whatever needs to be done.”

Diego Garrido worked on Musgrave’s airplane for two years while a student at Lake Placid High School. Now, he’s a technician in the Rotax engine maintenance shop at Lockwood Aviation, and he’s enlisted in the U.S. Air Force and is scheduled to start his military career in 2021.

“When I look at Story’s airplane, I can’t believe how well it turned out,” Garrido said. “When you work on it, you focus on one little piece at a time. It’s incredible to see it all together. I’ve been around a lot of AirCams, and this one’s one of the nicest.”

Musgrave said he intends to take every student who participated in the project for a ride in the airplane. “Every kid that worked on it gets to fly in it,” he said. “The teamwork and self-discipline they showed on this project will help them no matter what they decide to do in life.”

Musgrave first heard about AirCams in 2016 when he gave a talk at an aviation banquet in Sebring. He learned about the youth aerospace education efforts taking place there and wanted to support them. Lockwood, Musgrave, and John Rousch—an educator and pilot who leads the aerospace education program—quickly came up with the idea of building an AirCam with Musgrave, and he bought a kit right away.

The twin-engine pusher with Clamar amphibious floats is relatively complex compared to other kit airplanes. But the EAA hangar is a stone’s throw from the AirCam factory, and experienced AirCam technicians were there throughout the entire process. The kids met up to three times a week during the school year, and the EAA chapter had weekly gatherings where they could work on the airplane.

Musgrave’s home in the Orlando area is a roughly three-hour drive from Sebring, and he came there often to work alongside the students.

“It was pure magic whenever Story came down,” Rousch said. “The kids love him to death. He bought all the tools they needed, he got to know them on a personal level, and he was with them every step of the way.”

Luke Halpern, a student, became project manager from the time the kit arrived in April 2017 until completion. (Halpern is now an aerospace engineering student at Embry-Riddle Aeronautical University in Daytona Beach.)

When someone asked Musgrave what it was like to work on the Hubble Space Telescope, the astronaut said it was remarkably similar to the things they were doing.

“We got a team, we got a mission, and we got the tools,” he said. “You make a plan. You build, you test, and you figure out how to improve. You’re doing exactly the same things here.”

Musgrave learned to fly as a young teen, and his initial solo was in a 65-horsepower Luscombe 8A. Throughout his adult life, he’s owned a series of general aviation aircraft including a Cessna 150, 170, and 172; an American Champion Decathlon; ICA IS–28 glider; and a Beechcraft T–34. The AirCam is his first experimental/amateur-built airplane, and his first seaplane.

Musgrave has big plans for future adventures. He wants to fly his AirCam throughout the Bahamas, Puerto Rico, and perhaps as far as South America. “I like islands,” he said. “And I like blue water.”

On his second flight in the front seat of his AirCam, Musgrave flew in formation with a similar airplane to produce the photos for this article. On his third, he flew next to a speedboat for more photography.

Musgrave is relaxed and happy in the air, and he projects a sense of wonderment and playfulness. He lavishes affection on airplanes calling them “sweetie,” “love,” and “baby doll.” They’re objects of beauty and fascination to him, and he wants to understand them fully.

“The more I know about the airplane I’m flying, the more I can ask of it without exceeding its limitations,” he said. “I try not to be too demanding when I fly. I make gentle requests, and the airplane lets me know if it’s willing.”

After three flights and a pair of ground-school sessions, Musgrave’s first full day as an AirCam pilot was a wrap. He headed to the Cattleman’s Watering Hole, a restaurant and bar, where the waitress brought him a Bombay Sapphire gin on the rocks.

“I’ve had some good days in aviation, but none better than today,” Musgrave said. “I’d never flown formation with a boat, until today, and I’d never been in the front of an AirCam. Momentous.” 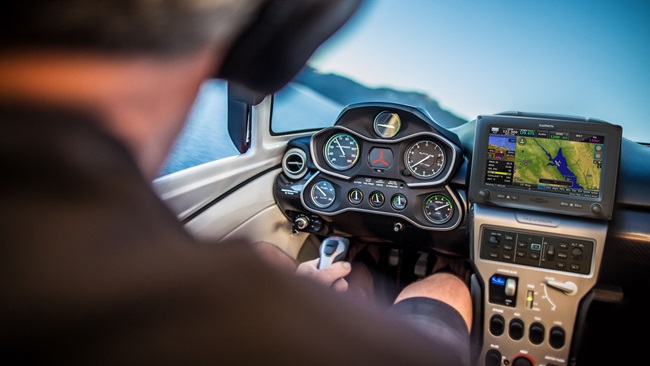 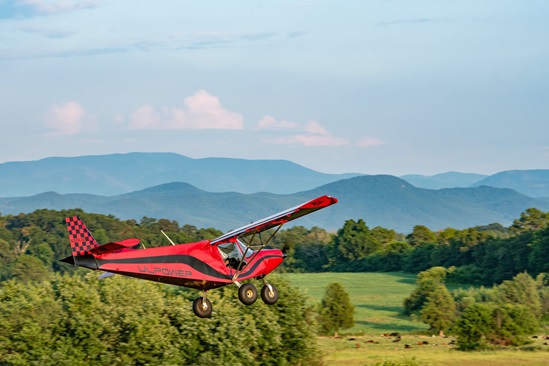