Get the app Get the app
Get the latest news on coronavirus impacts on general aviation, including what AOPA is doing to protect GA, event cancellations, advice for pilots to protect themselves, and more. Read More
Already a member? Please login below for an enhanced experience. Not a member? Join today
News & Media Never again: Smoke in the cockpit

Don’t let it cloud your ability to respond

After a week  in Cleveland, I was cruising home to Chicago in my Beechcraft Baron G58. I was on an IFR flight plan, but the day was smooth and clear at 6,000 feet agl. 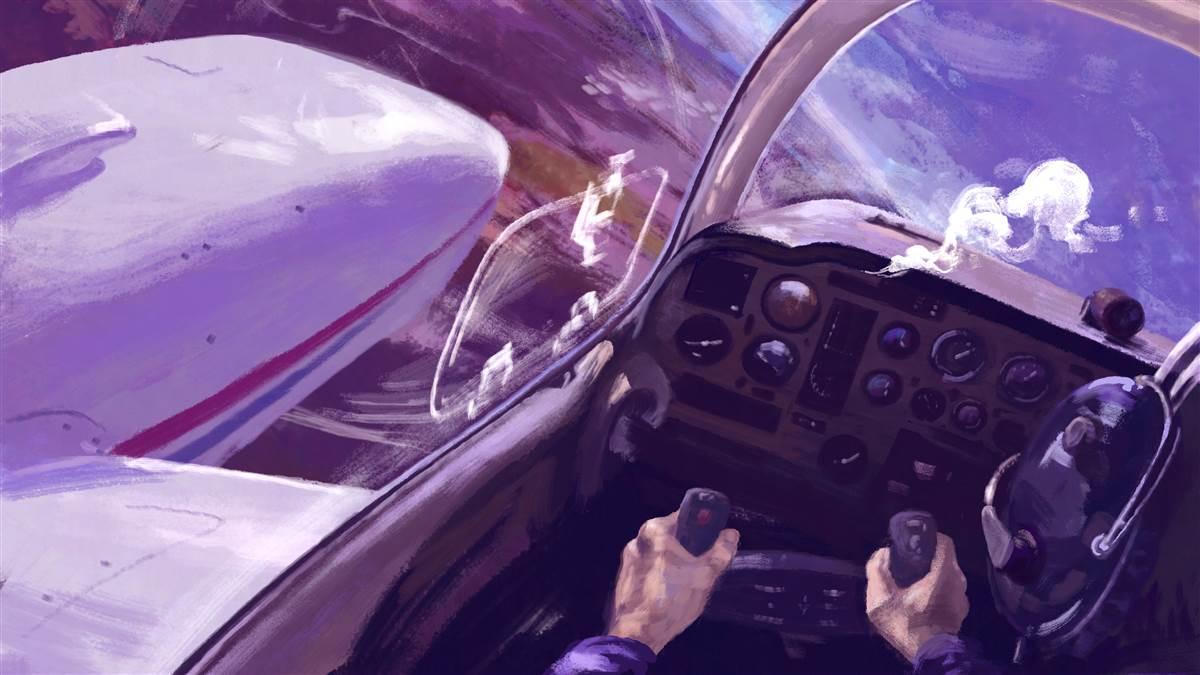 As I approached the corner where Ohio, Indiana, and Michigan meet, my thoughts drifted in tangents to the straight flight path. Engine gauges look fine. Should I get my car washed on the way home from the airport? Weather is still clear in Aurora. Stop at Chipotle for lunch or eat at home?

Kalamazoo Approach acknowledged my check-in, and told me they had a revised clearance, advise ready to copy. I keyed the mic and, literally in a flash, the peaceful flight ended. I heard an audible pop through the headset and, within a few seconds, caught the acrid smell of electrical smoke. I tried calling Approach several times. I could hear them, but they couldn’t hear me. My priority was to get on the ground as fast as possible. I turned left, in the general direction of Fort Wayne; pulled the throttles back; and started down.

Going back to the memory items on the checklist, I shut the avionics master off. The smell of smoke was starting to fade. I cycled the avionics back on and tried calling Approach again. They still couldn’t hear me. Engine gauges were fine. On the PFD, the flight director was commanding a turn to the right. There must be a problem with the automatic flight control system (AFCS) that caused the smoke. I tried to shut the FD off: autopilot disconnect button, FD button on the panel, cycle the avionics master again. No success. The FD bar was still there, commanding a climbing turn to the right. I scrambled around the breaker panels for a few moments— where the hell was that AFCS breaker? —but could only find the servo breakers. I didn’t bother cycling those, since I had manual control of the airplane.

I tried calling Approach again, and still got no reply, although I heard every word from them. They called a passing airliner, who tried to raise me on 121.5. That’s when the reality of this hit me. I fly a lot of IFR cross-country, and monitor guard. Once, over the rocky hills outside Wilkes-Barre, Pennsylvania, I picked up an ELT. When I relayed it to ATC, a Civil Air Patrol Skylane flying a drill turned it into a real SAR.

I heard an audible pop through the headset and, within a few seconds, caught the acrid smell of electrical smoke.
Now I was that guy. Images flashed through my head. The airline pilots making a couple comments about the little guy and an unconscious moment of silence before the usual cockpit banter. A controller in a dimly lit room, watching a green dot with dwindling numbers next to it, hoping for a call from the pilot rather than relief from station with a drug test and an NTSB interview.

I didn’t want to deal with a towered field with no radio; I have a reference sheet for the light signals, somewhere in the airplane, but now wasn’t the time to start looking for it. Auburn, Indiana, looked good. No tower. A single runway of 5,000 feet. I pulled up AWOS on com 2 and found a right quartering headwind landing Runway 28. No problem.

After a 360-degree turn to wait for a departing aircraft, the landing was an anticlimax, if not the smoothest given my raw nerves and undeniable desire to be outside the airplane. I called flight service and Kalamazoo Approach, told them what happened, and gave them my contact info. One of the line guys was waiting for me outside the airplane; the FAA had called after I dropped off radar.

I grabbed a bottle of water inside while the line crew towed the airplane to the shop on the field.

The mechanic and I couldn’t reproduce the smoke. Com 1 still wasn’t transmitting, but Com 2 was. With the task saturation of smoke, finding a landing spot, and a coms failure, I hadn’t thought to try Com 2. Our diagnosis was later confirmed: the Com 1 unit failed with a pop and some smoke. Incidentally, I figured out the flight director problem right after I landed. When I cycled the avionics master, the MFD started up on the splash screen. One must acknowledge this to go into normal operating mode; until then, there is no way to disconnect the FD. The FD was still on Nav and ALT mode, trying to get me back on the magenta line for Aurora.

Now to get home. I went through the following on my own, then called my CFI (also an airline A320 first officer and retired U.S. Air Force pilot) to check my logic.

Was the airplane safe to fly? Yes. The smoke was transient and cycling several electrical items multiple times didn’t reproduce it.

Was it legal to fly? Yes. According to POH section 2 (“Limitations”), I was legal for day VFR flight with a single com radio.

Were there landing alternatives? Yes. From Auburn to Chicago there is a suitable airport every 15 miles or so. I’d stay at 3,500 feet, for a quick descent if needed, and hopscotch from field to field on the way back.

My CFI agreed with my assessment: It was an acceptable risk to fly back. As an aside, the mechanic was pretty senior, and I could see his regard for me increase when I talked through my options and called my CFI. It has so often been the case that the wisest, most senior people in aviation hold you in the highest respect for slowing down, considering options, and asking for help.

The flight home was predictably hot and bumpy under summer buildups. This trip was undeniably successful, as airplane and pilot landed without a scratch, and with options to spare. Looking back, however, I see some things I clearly could have done better:

Aviate, navigate, communicate. I should have pulled the avionics breaker, decided on a landing field, and set up my approach. I kept flying the airplane but spent too much time trying to communicate before deciding where to land.

Practice simultaneous failures. I’ve practiced lost coms, and smoke in the cockpit, but never both together. This may sound stupid, but it just didn’t occur to me that the smoke was likely to come from a vital piece of equipment failing. Future flights with my CFI will involve multiple simultaneous emergencies.

Return things to normal. By leaving the MFD on the startup screen, I created another, totally unnecessary layer of confusion by putting the flight director in a mode where it couldn’t be turned off. This led me to believe that the FD was the culprit, even though it had nothing to do with the problem.

In a lost com situation, try Com 2. Sounds simple, right? It’s amazing how the smell of smoke can cause tunnel vision.

Carry a smoke hood. It wasn’t needed here, but this was a reminder that not all smoke stops on its own. AOPA

Alex Jones is a physician in the Chicago area and flies a Baron G58.