Get the app Get the app
We will be performing maintenance on our systems Sunday, 8/21, beginning at 12:00 A.M. ET and ending at 6:00 A.M. ET. During this time, you may experience intermittent service outages. We appreciate your patience.
News & Media Technology: hp versus kW

Why eVTOLs and batteries don’t hold up to horsepower 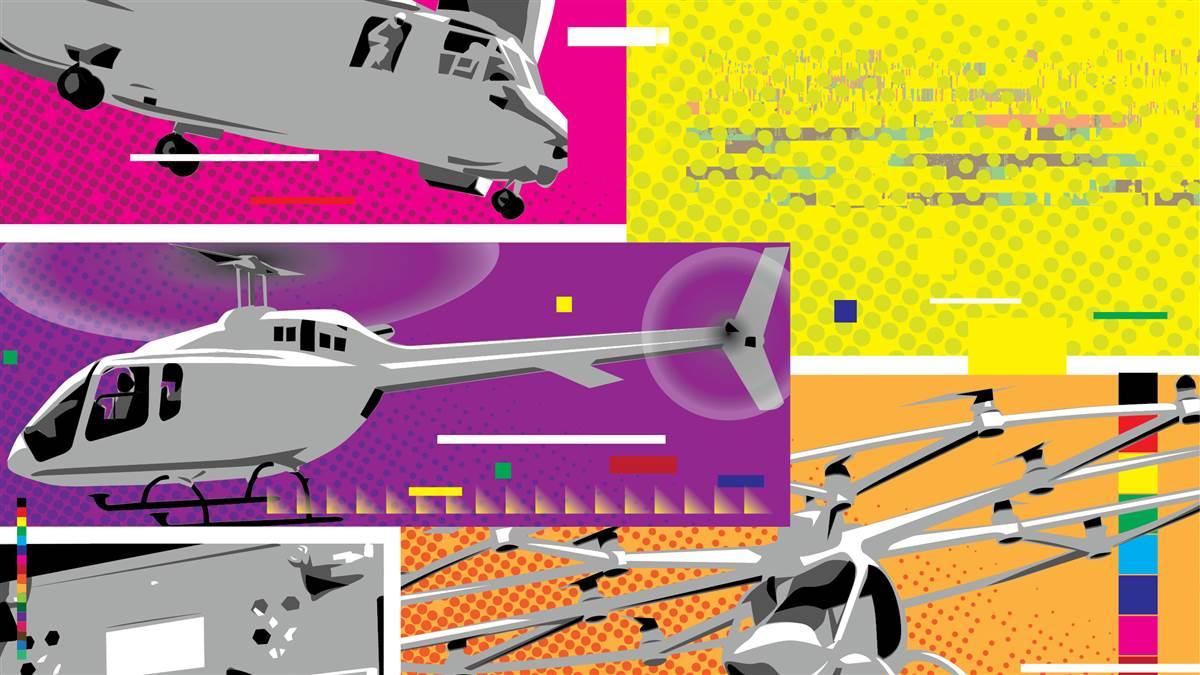 Electric power, by the numbers 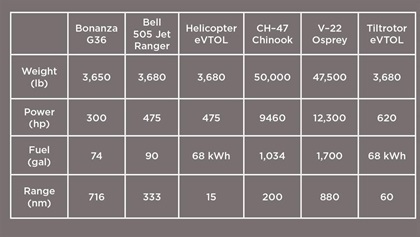 50:1—Energy content per kg or per pound: avgas compared to a lithium-ion battery

We all see electrically powered drones buzzing around, so why can’t the same technology be used to make eVTOL (electrically powered vertical takeoff and landing aircraft) air taxis that whisk their passengers through the skies above crowded city streets?

When we fly our piston or turbine airplanes, we’re always concerned with power, which is the rate energy is used—in other words, energy divided by time. Our pilot’s operating handbooks publish fractions of the maximum rated horsepower for different settings at different altitudes—say, 65 percent or 75 percent—and give the corresponding fuel flows in gallons per hour. And because fuel is a store of energy, fuel flow is also equivalent to a quantity of power.

With electrical power the same principles apply. But now it’s not avgas or jet fuel that’s the energy store. Instead, it’s the charge in the battery. So, it’s the size and charge of the battery that determines the speed and range of the aircraft. Since power is energy divided by time, we can also say that energy is the product of power and time. This is how electrical energy consumption is measured, as the product of power in kilowatts (kW) and time in hours—in other words, the kilowatt-hour (kWh).

Meanwhile, the unit of power for internal combustion engines is horsepower. You can convert horsepower into its electrical equivalent, so the 200-horsepower Lycoming IO-360 in my Mooney produces a rated power of 150 kW. I usually fly at a 60-percent power setting, which translates to about 90 kW. At that setting fuel flow is about 10 gph, which translates into about 360 kW. That means only 25 percent of the energy from burning the fuel is used in moving the airplane through the sky. This is because of the poor efficiency of the piston engine. Fundamental thermodynamics would say that the piston engine should have an efficiency of almost 60 percent, but various losses conspire to lower the efficiency—such as the engine’s bearing and piston frictions, poor valve seating, and the need to drive accessories. All contribute to power loss. This is where the electric motor shines, with efficiencies as high as 95 percent. So, what’s the problem?

The performance of batteries is specified in terms of the energy they store divided by their weight, expressed in kWh/kg. This is the battery’s energy density. The theoretical maximum for a lithium-ion battery with a lithium metal oxide cathode and graphite anode is 0.27 kWh/kg. In practice, battery packs have not yet approached this value. For example, the high-performance Tesla S uses a 100-kWh battery that weighs about 1,375 pounds, which equates to an energy density of 0.16 kWh/kg. Bye Aerospace optimistically quotes a value of 0.25 kWh/kg for its eFlyer 2’s battery.

But those figures are still very low compared to avgas, which has an energy content of 12.3 kWh/kg—about 50 times greater. Putting it in perspective, the energy content in the Tesla S battery is the same as 2.1 gallons of avgas.

The low energy content for a given battery weight does not offset the electric motor’s increased efficiency. An electric airplane with a battery that weighs the same as a piston airplane’s full fuel load simply won’t travel very far.

For an electrically powered aircraft,  the weight of the  battery—the equivalent of the fuel— doesn’t change.If the battery weighed the same as a full fuel load one might think the range of the electric airplane was one-fiftieth of the conventional airplane’s. It’s not quite that bad, but we have to take into account that the electric motor in flight uses almost all the energy stored in the battery, while the piston engine only uses 25 percent of the energy stored in the fuel (a turboprop or jet engine uses about 30 percent). So, the overall range of an electrically powered aircraft is 50×0.25 = 12.5 times less than an airplane powered by a piston engine running on avgas, and 50×0.3 = 15 times less than a turbine-powered airplane.

My Mooney has a gross weight of 2,700 pounds, of which only 13 percent (360 pounds) is fuel. Maximum fuel for a long-range commercial jet aircraft such as a Boeing 787 might be as much as 45 percent of the maximum gross takeoff weight. If these aircraft were electrically powered, with the same weight devoted to the battery as to fuel, they would have a range only 1/15 as far. For example, an aircraft that flies from Los Angeles to London with turbine power would barely make it to Phoenix, Arizona—not that such an aircraft would be practical in its present form. And the maximum landing weight of large commercial aircraft can be lower than maximum takeoff weight because fuel is burned en route; for an electrically powered aircraft, the weight of the battery—the equivalent of the fuel—doesn’t change.

Given this fundamental limitation on battery storage capacity, it’s not surprising that the proposed uses of the electric aircraft under development are short hops across the harbor, or short training flights. Even with this limitation it should be remembered that a fully discharged lithium-ion battery should not be fully charged in less than one hour, if you want it to last—so Southwest Airlines-style quick turns are out of the question.

Thomas Edison was impressed by Henry Ford’s gasoline-powered Quadricycle of 1894. “Young man, that’s the thing,” he supposedly told Ford. “Electric cars must be kept near to power stations. The storage battery is too heavy. Your car is self-contained—carries its own power plant—no fire, no boiler, no smoke, and no steam. You have the thing. Keep at it.” —Excerpted from Automobile magazine

An aircraft that is capable of vertical takeoff, such as a helicopter, needs a more powerful engine than an aircraft whose lift is provided by wings. For example, a small helicopter engine’s power rating is about 1.5 times that of a conventional airplane of the same weight. This can be seen when comparing the Robinson R44 with a Cessna 172 or a Bell Jet Ranger with a Beechcraft Bonanza. Helicopter rotor blades are like wings with a high aspect ratio, designed to produce as much lift as possible with minimum drag. Forward thrust is provided by effectively tilting the rotor, but even in forward flight about 90 percent of the power is used to provide lift.

To assess whether an electrically powered helicopter comparable to a Bell 505 Jet Ranger could be used as an air taxi, we would replace a full fuel load with a battery whose weight is equivalent to 90 gallons of Jet A. Even assuming an optimistic 0.25 kWh/kg, the battery capacity would be no more than 68 kWh. The maximum journey time for the electrically powered equivalent would be about 10 minutes, limiting journeys to a range of about 15 nm.

So, why not just copy the design of small drones and use multiple propellers for lift instead of a single rotor? An additional electric motor and propeller could be used for forward flight. A comparison of the power available to the minimum power needed to hover shows that drones with propellers are quite inefficient compared to helicopters with rotors. This can also be seen by comparing the V–22 Osprey and the CH–47 Chinook, which weigh about the same. The Osprey’s turboshafts produce 12,300 horsepower while those on the CH–47 produce 9,460 horsepower. Furthermore, a propeller is very inefficient at providing vertical lift; even the fastest vertical climb rates correspond to airspeeds where the propeller is not operating efficiently.

Although the tiltrotor is not as efficient for vertical lift, it greatly increases the range since the wings provide lift in forward flight, and all the prop rotors have to do is provide thrust to overcome drag. The promise of increased combat radius provided the impetus for the development and deployment of the V–22 Osprey. The same is true for an eVTOL air taxi; the range would be greater as a tiltrotor than a conventional helicopter.

But assuming the aircraft is about the size of a Bell Jet Ranger weighing 3,680 pounds, with the battery accounting for 20 percent of this mass, the electric equivalent’s range is only about 60 nm assuming 675 kW of peak power and performance otherwise comparable to the Osprey.

If battery performance improves, and different battery technologies make it possible to increase the energy density, both fixed-wing and vertical-takeoff electrically powered aircraft would become more competitive. But at the present time the 50-times advantage in energy density between avgas or jet fuel and the best lithium-ion batteries available do not compensate for the relative inefficiency of either piston or turbine engines.

Peter Rez is an Arizona State University physics professor from Scottsdale who flies a Mooney.