Get the app Get the app
Already a member? Please login below for an enhanced experience. Not a member? Join today
News & Media Dueling electric aircraft demos at AirVenture

German air mobility pioneer Volocopter made its first public demonstration flight in Singapore back in 2019, but arrived at EAA AirVenture 2021 with a more specific superlative in sight—the first public, crewed, electric vertical takeoff and landing (eVTOL) demonstration in the United States. A shorter flight by a smaller aircraft, California-based Opener’s BlackFly, was made on the same day, claiming a subtly distinct superlative, the “first public human-operated eVTOL fixed-wing aircraft demonstration.” 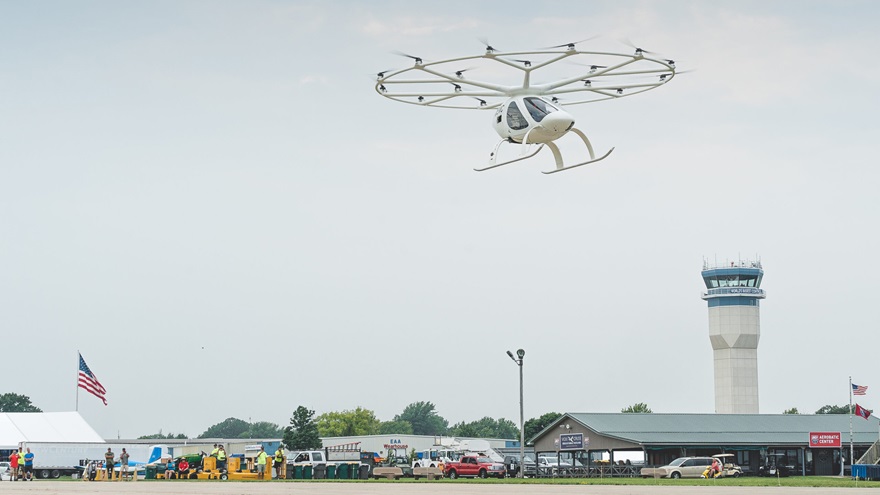 Distinguishing BlackFly as a “fixed-wing” single-seat eVTOL aircraft is somewhat of a misnomer in the context of the flight in question, because the wings appear to function more as motor mounts than airfoils, at least during takeoff, landing, and slow flight. But Volocopter’s multirotor design has no wings, so that produced an opening for Opener to claim a hair-splitting superlative no matter what time the flight took place. The video of BlackFly’s July 27 Oshkosh flight debut was uploaded to YouTube July 28.

Both are generating press.

Volocopter announced that the 18-rotor Volocopter 2X flight reached an altitude of about 164 feet and a top speed of 18 mph during its 4-minute flight.

Let’s leave it to historians with access to camera timestamps and witnesses to sort out which eVTOL got in the Oshkosh air “first,” and declare each the winner of a public attention coup that may help speed acceptance of small, multirotor aircraft powered by batteries.

Volocopter and Opener are aiming for different markets. BlackFly is a single-seat ultralight that will not require FAA certification, or pilot certification, while the Volocopter 2X is a precursor of the VoloCity commercial air taxi that will carry two passengers and hand luggage, with a maximum payload of 440 pounds, according to specifications published by the company.

BlackFly, designed by Canadian-born inventor Marcus Leng, will be a flying recreational vehicle (albeit likely the precursor to larger iterations), while Volocopter is lined up and waiting for clearance to serve among the first vehicles to facilitate urban air mobility, a subset of a broader concept known as advanced air mobility, which includes longer, regional flights as well as rooftop city service. While BlackFly appears likely to reach the market much sooner, Volocopter is among the leaders in a very crowded field of contenders (at least 300 by most counts) seeking to make commercial air taxi service a reality.

“After tens of thousands of miles tested, we are thrilled to have showcased BlackFly and its potential,” Leng said in Opener’s July 28 press release. “This is an exciting time to be at the forefront of personal aerial technology, and we are honored to hold a place in history for the first public demonstration of a human-operated eVTOL fixed-wing aircraft.” 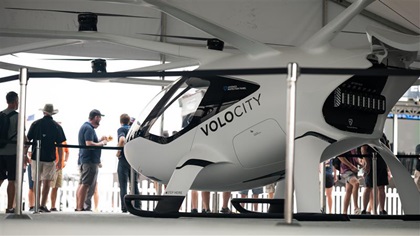 Visitors to Volocopter’s large exhibit at AirVenture were offered a chance to sit in a VoloCity mockup and experience the future air taxi’s interior firsthand.

“Volocopter successfully conducting the first [U.S.] public manned test flight of an eVTOL company in the [United States] is a milestone for the industry and a reminder that our commercial launch is fast approaching,” said Volocopter CEO Florian Reuter, in the news release. “We can talk about our lead in certification, low noise emissions, and global partnerships all we want, but nothing shows just how close we are to launch UAM as a service as does flying an air taxi in front of crowds and inviting people to sit in our aircraft.”

“Oshkosh is a haven for enthusiasts and experts to embrace the pioneering spirit of aviation, and today’s Volocopter flight is one for the history books,” Larsen said. “This is the spirit of Oshkosh giving our visitors the chance to experience real pioneers, who will change aviation for good, right here.”