Get the app Get the app
News & Media The Buddy System

Sharing flying experiences has kept these friends in the air

Paul Saari and Greg Scott are dental colleagues in Florida. The pair own a Legend Cub hangared in Winter Haven, Florida. They have flown together since 1987 and have co-owned the Cub for the past 15 years. “Flying with Greg and then going out to dinner or breakfast together has provided me with some of the happiest memories of my life,” said Saari. 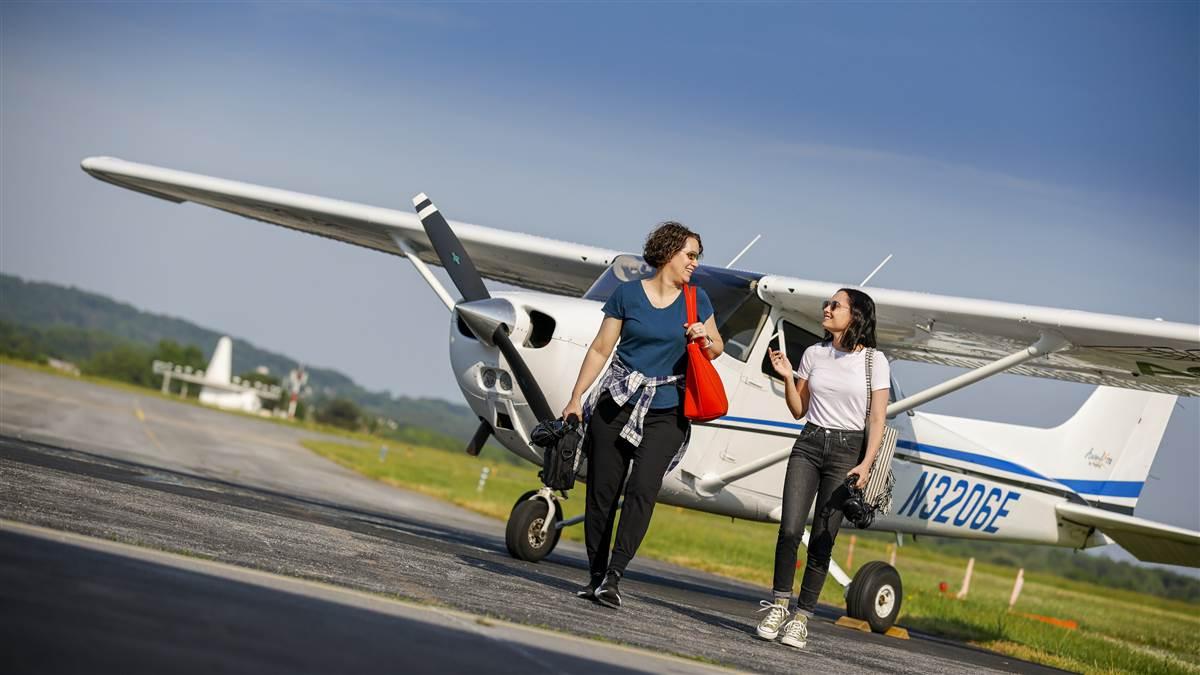 Eric Jacobs and Michael Callaghan are part of a group of friends who met at Jacobs’ father’s flying club in New York. The 20 or so kids who would meet at the airport to wash airplanes, swap stories, and watch their parents fly and have fun have stayed friends throughout the years. Now four generations of aviation enthusiasts still get together after nearly 50 years of friendship and sharing flying—and life.

Robert Followell had a flight instructor who made flying tedious and not fun. Then he found Grant Bales, CFII at Olive Branch Airport in Mississippi. For nearly 30 years after Followell got his certificate, the pair flew every Saturday (Krispy Kreme doughnuts to start the day, Bales’ favorite) until cancer took Followell’s best flying friend.

Tips for sharing your passion with others

Take someone flying
A good way to prepare your intended passenger might be to share a video or resource about general aviation and learning to fly. The free Sporty’s Get Started with Learning to Fly course or AOPA’s You Can Fly issue of Flight Training both provide an overview. For more inspiration, point her to online sources where beautiful videos of flying are posted. I often direct people to gliding videos, which showcase the purest and most beautiful form of flying, on the “Delobel Gliding Channel” on YouTube.

Flight day
Ensure your passenger’s comfort by picking a day with good weather, clear skies, smooth air, and light winds. Also, try to pick a time when there’s less traffic, so you can concentrate on your passenger and less on avoiding conflicts, which might make your passenger nervous. Aesthetically, I often fly an hour or two before sunset when everything looks its best, with the setting sun glimmering across the valleys and mountains.

Go somewhere
Try to go somewhere instead of just flying around the local airspace. For my demo flights there’s an old-time aerodrome that’s a great destination for a short hop and a fun landing on the grass. After looking over some vintage biplanes, we’ll take off again for a low and slow, meandering flight along a scenic river and back home, where we’ll have lunch at a really good airport café.

A hands-on experience
Explain, demonstrate, and then let them try it—that’s the method good instructors use to teach pilots. Do the same with your new friend. Depending on how comfortable they are, let them take the controls and talk them through a few turns, perhaps a climb and a descent. Have them follow a compass course or the GPS for a while, but don’t turn it into an instrument lesson. Enjoy yourselves while highlighting the fun, challenges, and utility of flying a small airplane.

Don’t be Yeager
Chuck is Chuck and you’re not. You want your passenger to walk away, period, but you also want him to walk away wanting to learn to fly, not kiss the ground with thanks that he’s been delivered from the hand of death. Even moderate turns can freak out new passengers, so be gentle at first and ask your passengers if they’d like to do steeper turns. Don’t ever cut the engine and scream in mock terror, or do anything that starts with the phrase, “watch this.”

Photo op
Be sure your passenger takes home a photo of herself sporting the “flying grin.” That may help garner support on the home front and a sincere, “well, it looks like you enjoyed yourself, why don’t you take some lessons?” 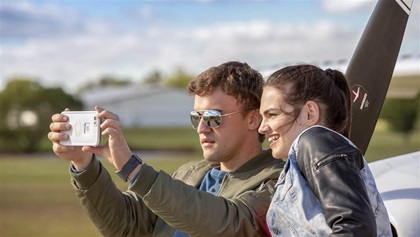 Brian Gately was at a singles venue where people talked about what they liked. He mentioned aviation and that he had just bought a Cessna 150. A woman expressed interest in flying, saying her dad would take her to the local airport when she was a kid to watch airplanes take off and land. “I told her that I was planning my flight around the Caribbean basin alone in my Cessna 150. She said ‘Neat, can I come along?’ I said, well, I’m not sure, I’m packing some extra gas and don’t know how much room there is. She said, ‘I pack light.’ So, she came along!” Gately and Louisa Reed have been married since that flight in the 1970s. She became a private pilot after the flight.

Sharing the experience always enhances it, whether it’s a vacation, a dinner, an exercise program, or an avocation. Finding someone who shares your enthusiasm for learning to fly might just be the reason you do—or don’t—enjoy a lifetime of flying experiences.

Saari and Scott were colleagues who knew one another because of their professions—Saari is a dentist and Scott an orthodontist. They met because Scott wanted to see treatment rooms Saari had built in Winter Haven. They became friends but it was 10 years before Saari found out Scott had been a private pilot since he was 17. “We hit it off from day one,” Saari said. “But neither of us had time for hobbies” as they were both building their businesses. Saari had always loved airplanes and with Scott’s support, he too became a private pilot. He bought a 2000 Cessna Millennium 172SP and the pair began flying together as often as they could. “He was one of the first people I took up,” Saari said. “We had so much fun.”

Fast-forward to 15 years ago—Saari invested in an office building and sold his airplane. But his wife, Kay, knew he missed flying. Not much of an aviation enthusiast herself, she recognized the charm of an American Legend Cub the couple saw at the Lakeland Linder Airport. “Mom wants us to buy a Cub,” Saari told Scott. The pair affectionately calls Kay “mom” and refer to themselves as “Wally and the Beav” after the 1950s television show. “He’s Wally and I’m the Beav,” Saari said. “You couldn’t ask for a better friend. We challenge each other; he’s given me more confidence in my flying. He trusts me, and I trust him.”

Jacobs and his brothers hung out at the airport and met other kids who were doing the same—washing airplanes, begging rides, listening to the older pilots. “We were a very tight-knit group of adults, boys, and girls all bound by a love for aviation,” said Jacobs. “As adventurous kids going through middle school, high school, and on to college we shared many, many, memories—some may be OK for print, some not. We were very active in the Civil Air Patrol. The pilots in the group made sure the kids got to fly on a monthly basis. We even organized our own ground school; many of us could fly by ourselves before we could drive by ourselves.”

The group has been friends for more than 46 years. “While life has taken us all in different directions, we still are connected,” said Jacobs. “We still have reunions every year/other year. Our group now spans four generations. We have celebrated weddings (among us and with ‘outsiders’), births, and shared too many losses together. I know that many of us would readily say we are who we are today because of this group.”

“I had an instructor who told me, you’ll never be a great pilot, but you may be an adequate pilot. Flight training with him was work and never comfortable. Success was elusive,” said Followell. “Luckily, he recommended Grant Bales, insurance adjuster by day and CFII weekday evenings and Saturdays. Confusion and fear on my part were quickly replaced by confidence and proficiency. Flight training was fun!”

Followell owned a Piper Twin Comanche, which his previous CFI had called an “instructor killer.” Bales, however, embraced the Comanche and the Piper Navajo Panther Followell later bought. “Grant would often say he didn’t want payment because he enjoyed the flights as much as I did,” said Followell. “After the ‘perfect’ flight, I told him, when I find no mistakes and feel I have learned nothing, I will not pay you. Of course, there were no perfect flights in my mind, and he was always paid.”

The Gatelys became a couple through their shared experience. In his Cessna 150, which they dubbed “The Green Machine,” they shared an epic adventure. “We flew clockwise island-hopping Bahamas, French West Indies, Venezuela, Colombia (where I was in the Peace Corps), then up through Central America and Mexico, Texas (where my family is from), and then back to Ohio,” Gately said. “And my wife and I are still flying, still married, and we’ve been a two-aircraft family three times. I sold my 150 to Louisa and bought a 172, then later I gave her our older fixed-gear 1968 Cardinal and bought N2117Q [a 1974 retractable gear Cardinal] in 1986.”

AOPA You Can Fly Flying Clubs
Find a flying club, improve a club, or start your own.
youcanfly.aopa.org/flying-clubs

EAA Young Eagles Program
Give kids ages 8 to 17 their first free ride in an airplane.
eaa.org/youngeagles

“Every one of us who flies gets to meet a really interesting group of fellow pilots and aviation enthusiasts,” said Jamie Beckett, an AOPA You Can Fly ambassador. “Maybe we fly together. Maybe we spin wrenches in the hangar together. Or maybe we just gather around a table, drink coffee, and tell stories. Those relationships and the friendships that grow out of them are what really makes aviation work for me. I suspect I’m not alone in that belief.”

One of the highlights of becoming a pilot is sharing the joy of flight with that majority of the population who’ve never flown in a small airplane. Giving a ride to that neighbor who borrows your ladder, the kid at the airport fence, or a business colleague just might inspire someone to earn her wings—and make a friend for life.