Get the app Get the app
Already a member? Please login below for an enhanced experience. Not a member? Join today
News & Media Attorney F. Lee Bailey dies at 87

Enemy of the prosecution, friend of general aviation

Most Americans remember F. Lee Bailey as the renowned criminal defense attorney who helped acquit O.J. Simpson and who was responsible for freeing Sam Sheppard, the physician convicted of killing his wife. But to pilots, Bailey is best known for his role in helping famed aerobatic pilot R.A. “Bob” Hoover fight the FAA’s emergency revocation of his medical certificate, and for developing the Bailey Bullet, a highly modified Piper Twin Comanche, and the Hoover Hornet, a modified Rockwell Shrike. Bailey, with a group of investors, also owned the Enstrom Helicopter Corp. from 1971 to 1979.

The inspired barrister, pilot, and entrepreneur died June 3 at age 87, according to numerous news sources. He reportedly died at a hospice center in the Atlanta area. 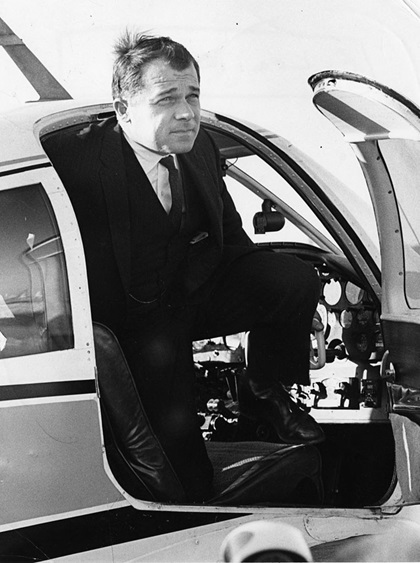 The flamboyant attorney—dubbed the first “celebrity attorney” by some, on a par with Clarence Darrow and Edward Bennett Williams—possessed a unique courtroom style. Backed up by an encyclopedic memory and a signature interrogative style of questioning, he had the gift of convincing juries of his clients’ innocence, using a theatrical speaking method to inject doubt in the prosecution’s arguments.

Francis Lee Bailey was born in Waltham, Massachusetts, on June 10, 1933. He attended Harvard University but dropped out after two years, joined the Marines, became a fighter pilot, and joined a legal team at the Cherry Point Marine Corps Air Station in North Carolina. After the Marines, he returned to Harvard in 1956, then went to Boston University law school and graduated in 1960, reportedly at the top of his class.

He went on to start a detective agency and became an expert in the then-new field of polygraphy. The young attorney’s first case of note was the 1960 “torso murder” trial of George Edgerly, charged with killing his wife. Bailey won an acquittal. He had a setback in representing the so-called “Boston Strangler” Albert DeSalvo, when the court rejected his criminal insanity defense. But his biggest break came in 1966 when he won a U.S. Supreme Court reversal of Ohio osteopath Sheppard’s conviction in the murder of his wife. Bailey argued that the jury failed to render a fair verdict because it wasn’t protected from overwhelming negative publicity. This was a pioneering defense. Until this time, it was unknown. At a retrial, Sheppard was acquitted. This case went on to become the inspiration for The Fugitive TV series and feature film.

Less famous was Bailey’s defense in the 1976 armed robbery trial of heiress Patty Hearst. He argued that Hearst had been brainwashed, but Hearst was sentenced to prison. She was pardoned by President Bill Clinton in 2001.

In 1971, Bailey won the acquittal of Capt. Ernest Medina, who led a unit of U.S. Army soldiers who killed more than 300 civilians in the village of My Lai during the Vietnam War. He argued that the soldiers acted on their own, and that Medina learned too late. Medina was found not guilty. Bailey later hired Medina to work at Enstrom.

More recently came the Simpson murder trial, when Bailey’s examination of police detective Mark Fuhrman helped convince the jury that evidence may have been planted, and that racism was a factor.

Through it all, Bailey basked in the publicity, appearing on television talk shows, giving speeches and lectures, publishing books—and flying around the country in his Learjet 23. Bailey owned several aircraft over the years, ranging from a Swift GC–1B (which he sold to fund his tuition at Boston University law school) to a Luscombe 8A.

In 1992 Bailey put his legal chops to work defending Hoover. After observing one of Hoover’s famous airshow acts in his twin-engine Rockwell Shrike Commander—a dead-stick loop followed by a spot landing and a taxi back to his original parking spot—FAA observers claimed he performed poorly. After 33 more airshows the FAA asked for his medical certificate. Hoover passed a battery of tests, but the FAA wouldn’t return his medical. It even issued an emergency revocation.

Bailey and former AOPA General Counsel John Yodice successfully represented Hoover before the FAA. Yodice, a long-time friend of Bailey’s, recalls that “Bailey was brilliant … he was a superb lawyer and made the FAA look silly when they wouldn’t return Hoover’s medical certificate.

“He had a phenomenal memory,” Yodice said. When discussing legal strategy over dinner, Yodice said Bailey seemed nonchalant as Yodice shared administrative law details. “But the very next day in the hearing, when a particular point we had discussed came up, he would repeat verbatim what I told him about that particular administrative law situation. Just brilliant. He was a good pilot too.”

Yodice said, “Even now, the effects of the Hoover case reverberate. The FAA is very much more reasonable as a result of the lashing it got from the pilot community because of the mishandling of the Hoover case.”

In 1996 Bailey and his son Scott formed Palm Beach Roamer, a company created to modify light airplanes and yachts. The “Bailey Bullet,” a vastly upgraded Piper Twin Comanche, and the “Hoover Hornet” were products of that enterprise. To learn more about the Bailey Bullet, read the 1998 AOPA Pilot article, “The Ultimate Twin Comanche.”

Bailey had his own legal problems at times, culminating with charges that he misused assets owned by a convicted drug trafficker. This ultimately led to his disbarment. In later years, Bailey moved to Maine and continued efforts to gain readmission to the bar.

AOPA Editor in Chief Thomas B. Haines contributed to this article.