Get the app Get the app
Already a member? Please login below for an enhanced experience. Not a member? Join today
News & Media Dog & plane

Flying with your best friend

More than half of United States households own a dog—that’s about 164 million people who consider their dog(s) part of the family. 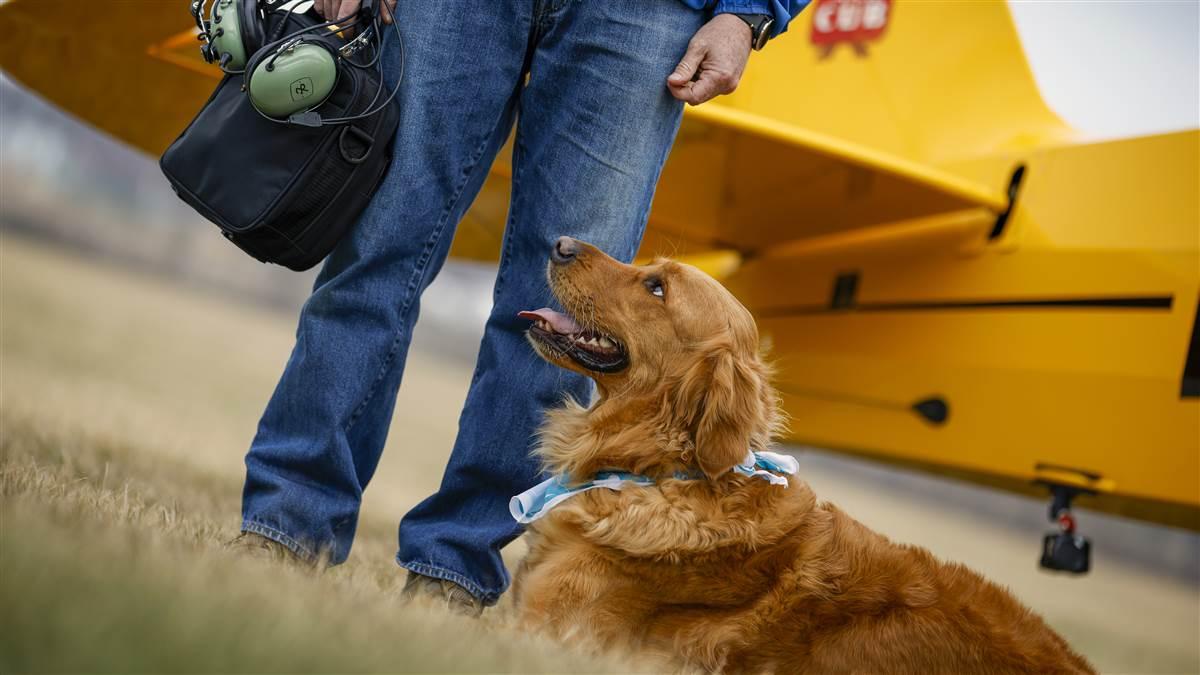 And who do you want to take on your first flight after you earn your certificate? If she’ll go, you should probably take your mom first, but I bet you’d rather take Fido (or Petey, or Max, or Precious). Meet three pilots who consider their dog the very best co-pilot. 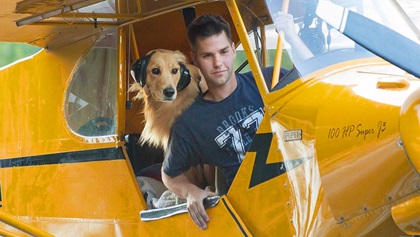 Andrew McNamara is an engineer with Microsoft in Montreal, Canada, and a self-described “solo adventurer.” However, on his solo travels in the wilds of northern Ontario he really isn’t alone—he has his best friend Maverick with him. Maverick is a 6-year-old golden retriever. McNamara now flies a Cessna 180, but he started taking Maverick flying with him in his Piper Super Cub. A photo of the pair in the bright yellow Cub was a GoPro Instagram photo of the day a couple of years ago. McNamara blogs their adventures on his website, Setting North (settingnorth.com). 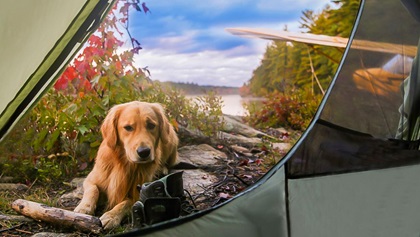 “I mostly do float flying up to Northern Ontario on camping trips. I just fly up north and check out three to four different spots that I found on Google Maps. Fly over each one and then choose one to set up a tent and camp for three to four days,” said McNamara. “I love that I can bring my dog with me fly-in camping. When I first decided to get a dog, my biggest worry was that he wouldn’t enjoy flying. I slowly introduced Maverick to flying by just being around planes as they start up, then taxiing for a few weeks in planes, then flying with him in the back. Lots of treats all the time. He’s always reacted very well to flying because he’s been around them regularly since he was 8 weeks old. His first flight was at 10 weeks old.” 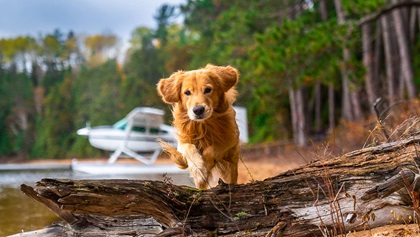 McNamara believes Maverick enjoys flying because he loves the water and camping. On his blog, McNamara offers unique and valuable tips for camping with your dog that you probably won’t find elsewhere.

“I think he especially likes flying on floats because he knows that when we land, he’s going to be up in the wilderness and get to do a lot of exploring, fishing, hiking, and swimming,” McNamara said. “He loves flying and it’s pretty common for him to stick his head out the window at 3,000 feet as we make our way up north. I’m sure a part of why he loves flying is that he knows that when he gets in the plane, our destination usually has water! For Maverick, the plane means camping, and there is nothing that he enjoys more.”

Maverick took to flying easily, and McNamara has never had problems with his dog in the cabin. He did lean on the window in the back seat and push on the back throttle in the Piper Super Cub, but “it was never an issue,” McNamara said. “I would move the front throttle back where I wanted it and it would move his throttle and usually make him uncomfortable and then he’d shift position.”

He is very calm in the aircraft, and he wears his Mutt Muffs on every flight.

“I figured that if I am protecting my ears then I should also protect his, especially since his are much more sensitive to sound than mine,” McNamara said. 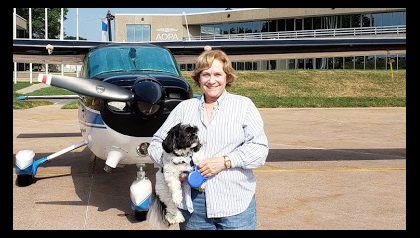 Retired technical writer Marci Haas has a good buddy named Bob. He’s a 15-year-old Shih Tzu whom she adopted when a friend discovered him living on his own at a gas station/barbecue joint near Dallas. Haas flies her Cessna Cardinal for fun and lunch dates. “When dogs are allowed at restaurants, Bob comes along,” she said. “For Bob’s first flight, I put his dog car seat into the plane. It was positioned just like in the car so Bob could see me. The seat is high enough that he can see out the window.”

Haas purchased Mutt Muffs and put them on Bob for his first flight. He took them off. After a couple of tries, he kept the muffs on. She started up and taxied out with Bob looking around, like he did in the car. She did the runup and took off. But when she flew a few miles, she looked at Bob and he had taken the ear protection off again. 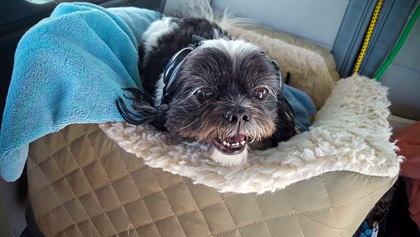 “It was on our third flight when Bob decided it was better to wear the Mutt Muffs, and he kept them on,” she said. Muff Mutts website says this is pretty standard; dogs initially don’t like the headsets but realize they help with the noise—hey, dogs are pretty smart! (See “What Are Mutt Muffs,” below.)

Most of Haas’s flying is local, but she and Bob flew a big cross-country from her home near Dallas to Maine, stopping in at AOPA headquarters on the way. Bob was “interviewed” by AOPA Live This Week co-host Warren Morningstar. “Bob really likes attention,” she said. “But it’s like flying with a small child. There is the car seat, the earmuffs, and strapping him in. Then you have to take along the supplies, like water and water dish, and some snacks. For our cross-country trip to Maine, I also brought along the dog food that Bob likes, his toys, and a dog bed.”

Shih Tzus are companion dogs, so Bob is happiest when he’s with Haas. She doesn’t think Bob cares one way or the other about the flying; he simply wants to be with her. He usually sleeps during the flight.

“Bob is usually a patient passenger, but occasionally he becomes a bossy back-seat co-pilot,” Haas said. “One time, I stretched my left leg not realizing I was pushing the rudder pedal. The plane slowly and cooperatively turned to the left. I realized this and looked back at Bob who was sitting straight up, giving me a very offended look that clearly stated, what did you just do? He was sleeping and I woke him up. I gently stretched my right leg and the plane slowly turned back on course. A look at Bob confirmed he approved of the maneuver since he lay down, gave a sigh, and went back to sleep.” 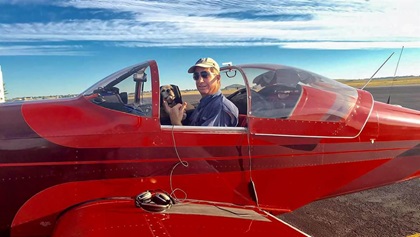 Tim Lower returned from work with the U.S. Army and Air Force in Iraq and had two goals: get a house and get a dog. He moved to Las Cruces, New Mexico, from his hometown in Pennsylvania, for his new job—manager of unmanned aircraft systems flight operations for New Mexico State University—and searched the pet shelters for his new best friend. He found a “runaway,” a dog that kept running away from its new owners. The last owner had returned him to the shelter saying, “keep him.” Lower took on the challenge.

“I learned that he was not really a runaway dog, but an extremely curious one. If we walked around the airport for instance, and there was an open unoccupied hangar, he was not satisfied to walk with me around it, he had to walk inside and cover the entire area checking it out. If I turned my back with him off leash, he would wander away—not run away—just go exploring,” Lower said. 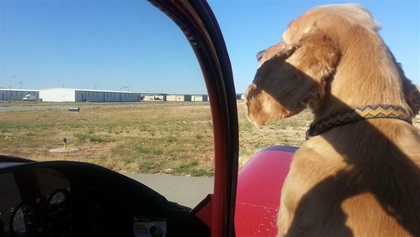 Maybe it was the name change; Lower called his new dog Justus, not the shelter’s name of Martin. The veterinarian estimated Justus’s age as about a year and a DNA test showed him to be 50 percent cocker spaniel, 25 percent Dalmatian, and 25 percent poodle. He weighs about 30 pounds and is now 14 years old. Lower owns a 1997 Van’s RV–6A.

“I had been road traveling with Justus for two years before I purchased my airplane. We had made the drive to and from Pennsylvania several times, as well as all over the West. He was a great traveler and very unhappy not going along,” Lower said. “After having the RV–6 long enough to feel comfortable in it…I became curious about how he would handle flying with me. I made him a foam headset to cover his ears and rigged up a dog harness to attach to the seat belt with a carabiner. I vividly recall completing my runup and pre-takeoff checks, preparing to pull onto the runway, looking over at him, and seeing him sound asleep.”

Lower modified the RV–6 to accommodate Justus’s dog bed by removing the right seat. He made a plastic carrier that wedged into the seat area. “He sleeps through 95 percent of all flight conditions. He can be asleep for three hours straight but as soon as I reduce power and begin a descent, he wakes up, sits up, and looks around as if to say, where are we now?”

Lower introduced ear protection early, but with both his own homemade ones and the commercial grade ones, Justus slid them off his head. “My homemade ones stayed on the best, but invariably I would look over at him and see that he had pushed them off and was sound asleep. He has never been a fan of head/ear coverings. He is partially to mostly deaf as well as mostly blind now, at least in one eye. I am not certain how much effect the hours and hours of flying we have done over the past 11 years had on him, but when he is gone I will get another dog and I will find something that protects the hearing and will not be knocked off.”

In 2018 Justus had issues with his hind legs. He had disk surgery but lost the use of his back legs. Lower now carries him to and from the airplane and car. “When I know I won’t make my destination because of weather or darkness or whatever, I stop a bit earlier than I might otherwise; before dark, before FBOs close, before other services become harder to obtain. Having a dog you are responsible for is a consideration. I can hike a few miles if I had to with an overnight bag at night, but I don’t want to have carry a 30-pound dog too. Even if he could walk, if it’s summer in the southwest and the pavement is hot, well you have to plan ahead for that stuff.”

What are Mutt Muffs? 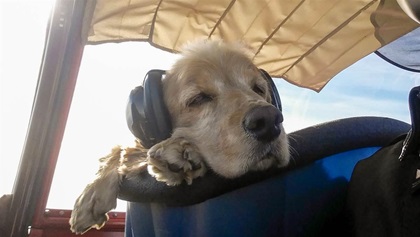 Westminster, Maryland, pilot Michelle McGuire created Mutt Muffs for her dog Cooper, a black Labrador retriever. She designed ester-resin foam headsets (the same material in human headsets) marketed today as Mutt Muffs (safeandsoundpets.com). The “dogset” fits over the dog’s head and ears and under the chin. There is a chart on the company website that helps owners measure for their own pets. Mutt Muffs are designed to prevent hearing damage, but they do not eliminate sound. Cost is around $60 from various retailers as well as direct from Mutt Muffs. Other options exist such as K-9 ear muffs from 4pawsaviation.com; however, Mutt Muffs have become the standard and the company has the most extensive product line (4paws only offers three sizes for example). There are options that are designed more for comfort than noise reduction, such as the Happy Hoodie from Zoni Pets (happyhoodie.com) and a handmade crochet “snood” for your dog from Zoo Snoods (zoosnoods.com). —JSW