Have you got the gas to become a hot air pilot?

Driving anywhere at 4:30 a.m. is a surreal experience. It’s still dark; the roads are quiet; and everything seems deserted. You get the sense that all you survey is temporarily yours, until sunlight floods the scene and regular folks venture out.

Up, Up and Away

Perhaps it is this sense of temporary autonomy that draws hot air balloon pilots out of bed before dawn to launch at a time of day when winds are at their lightest. Perhaps it’s just another strain of aviation obsession.

Patrick Smith of Frederick, Maryland, surveys the sky that is steadily lightening on this summer morning. Skeins of mist cling to the wet grass at Frederick Municipal Airport, though there will not be enough ground fog to interfere with the launch of his six-passenger balloon, N918LJ. It is dead calm at the surface, but Smith knows that microcurrents of air starting at around 200 to 300 feet agl will affect the direction of his flight. He’ll confirm this by releasing a helium-filled child’s balloon attached to an LED light, and watching the path of the balloon as it floats upward. Sure enough, it tracks slightly north, then south, as it climbs. He now knows what to expect. A balloon pilot may enjoy the unstructured nature of lighter-than-air (LTA) flight, but he can’t take chances, particularly with paying customers on board.

Smith has been a commercial balloon operator since 2010. It’s a seasonal gig, as the East Coast’s fussy climate can’t sustain a full-time business. Smith had initially focused his aviation path on the airlines. His timing was bad; the regionals hired him and assigned him to three different new-hire classes that subsequently evaporated when airline hiring took a nosedive in 2008. He was a flight instructor in airplanes, but by the time he and his wife, Meagan, started a family, the airlines no longer held their appeal. He’s now an insurance agent at Aviation Insurance Resources in Frederick, and the couple’s fourth child is expected in June.

Would you like to fly in that beautiful balloon?

Here’s how to get started 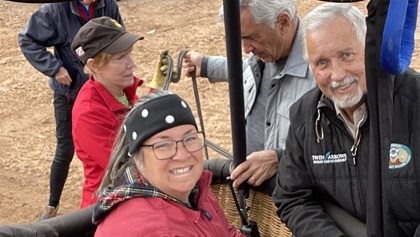 Want to add that LTA category to your pilot certificate? There are two ways to do it, according to balloon pilot Janet Patton of Denton, Texas: the quick route and the leisurely route.

The quick route is going to a dedicated Part 141 flight school in a good-weather locale such as Albuquerque, New Mexico, or St. George, Utah. Flying two hours a day, many people can complete the regulatory training requirements of 10 hours of flight training in a week. If you have a private pilot certificate in powered aircraft, you do not need to take a knowledge test, but you will complete a practical test with a designated pilot examiner. No medical certificate is needed to fly a hot air balloon.

The leisurely route involves flying your own balloon at your own pace. No flight school rents balloons, but a good, used balloon setup (envelope, gondola, burner, and tanks) can be had for $10,000, and you’ll need a trailer or vehicle to transport the gear. Balloons are FAA-certificated aircraft that require annual inspections.

The next challenge is to find an instructor. Patton wanted to learn to fly in her region of Texas so that she could become comfortable with the weather patterns there, but it took months of searching and networking within the ballooning community to make that happen. She completed her commercial LTA add-on in March, and she plans to instruct in hot air balloons once she has some more time logged.

Patton, a captain for American Airlines who also owns a Piper Cherokee 180, says she loves the peaceful nature of the sport, and the social aspect of crewing. But make no mistake: Hot air balloons may look easy to fly, Patton says, but they’re not.

Smith’s crew has arrived to help with the launch, piling out of a van that will later be used to pick up the occupants of today’s flight and transport them back to the starting point. Ballooning, like gliding, is a community effort. Today’s crew includes Smith’s dad, Kevin Smith; Meagan; Don Demember; and Keith Kern. “I love it because I never know where we’re going to end up,” Meagan says.

Smith readies the basket—gondola in balloon parlance—explaining each step as he goes. His genial patter puts customers at ease about the safety features of an aircraft that is basically an envelope of heated air, a tank of propane, a burner, and a flexible wicker basket. Hot air balloons have thrilled nonfliers since at least 1783, but even the most enthusiastic passenger can be trepidatious about climbing inside one. Smith attaches struts called uprights to the top of the basket; the flexible rods support the 67-pound burner and prevent it from compressing onto passengers’ heads when the gondola touches down.

Meanwhile, the crew is spreading out the envelope—all 315 pounds of it—on the wet grass. If there were any hint of air movement, they’d be doing this downwind of the launch site. Smith tests the propane tank—a crowd-pleasing step that shoots a plume of fire 10 feet into the air—packs it into the gondola, and anchors everything with a secure cable.

The navy-blue polyester bag has 24 gores, or vertical seams that form the shape of the balloon. A smoother surface like this one requires a higher number of gores. Those bubbly, bulbous balloons you see at festivals usually have eight. The panels connected to the gores are stitched at every one-tenth of an inch; if one panel tears during flight, the rip will stop at the next panel and keep the envelope intact to ensure a safe landing.

Smith secures the gondola to the ground with a tether before the bag is inflated. “We are putting up the sails before we untie from the dock,” Smith says.

Kevin Smith and Demember spread out the balloon as Smith rolls out a 9-horsepower fan powered by a Honda engine and fires it up. The balloon lolls, its navy-blue mass heaving. When the gondola is attached and lying on its side in readiness, the burner is turned on. Slowly at first and then rapidly, the envelope rises to a full 100 feet, holding about 130,000 cubic feet of air.

“It’s a beautiful sight,” says Kevin Smith, who loves getting up early to help with the launches. Demember is a science teacher in Bethesda, Maryland, who said he enjoys crewing a hot air balloon because it gives him practical ways to teach those concepts to his classes.

Patrick Smith was 4 years old when he first saw his mom crewing for and flying in a hot air balloon. Years later, while doing endless circuits in an airplane as a CFI in Frederick, he spotted a hot air balloon over nearby Mount Airy and longed to try a different form of flying. He bought a two-passenger balloon in 2009, intending to use it for sport flying. Hot air balloons are not inconspicuous, and while he was learning to fly it, he got lots of questions from potential clients. Nine-one-one operators also got lots of calls; nonfliers are quick to pick up the phone when they see a balloon landing, assuming that it is “crashing.” Fortunately, those calls have tapered off, thanks to open communications with local law enforcement.

The Smiths’ business, Tailwinds Over Frederick, now owns three balloons, including one emblazoned with a Maryland flag that is a big favorite in a state where diehards plaster the red, white, yellow, and black colors over every surface they can.

Balloon instructors aren’t prevalent, simply because they can make more money by selling scenic flights (see “Would You Like to Fly in that Beautiful Balloon?” right). Smith worked with Ron Broderick of Friendship Hot Air Balloon Co. to get the private pilot LTA and the commercial add-ons. (No CFI certificate is needed to flight instruct in a hot air balloon; the FARs give commercial pilots instructional authority.)

If balloon instructors are scarce, imagine scheduling an LTA designated pilot examiner. Smith recalls driving 11 hours to Hartford, Connecticut, in 2012 with Hurricane Sandy right behind. “I did the oral part on the phone with [the examiner] and then took the practical just before the hurricane hit,” he recalls.

The year Tailwinds Over Frederick opened for business, the Smiths planned 20 flights and flew 40. Each year business grew as people spotted the flying billboard. The fourth year they flew 120 flights before purchasing an eight-passenger balloon that enabled them to cut back on the number of flights while toting more passengers.

Fully inflated, the balloon is ready to go. The crew holds the lines while the pilot and passengers step into the gondola. Smith adds heat to the air in the balloon and it lifts off, taking its cargo with it. Every 1,000 cubic feet of air heated to a delta of about 100 to 110 degrees produces 20 pounds of lift.

Smith carries a handheld radio to communicate on the common traffic advisory frequency—the control tower isn’t open yet. The passengers are treated to a leisurely, low-level view of the Earth not afforded by fixed-wing aircraft and certainly not by airliners.

And it’s amazingly quiet. Aside from the occasional shush from the burner as Smith keeps the air heated and buoyant, there’s no thrum of an engine or wind rushing along control surfaces. Floating over a housing development near the airport, Smith often overhears people conversing on their decks.

It’s so quiet that, as the balloon crosses Interstate 70 and crests the Monocacy River, it surprises a herd of deer drinking in the shallows. For one long moment they don’t know exactly what they’re looking at. Then they bolt into the woods.

Smith doesn’t know exactly where he’ll touch down yet, but, based on the wind direction, he has a goal in mind: a housing development under construction just south of the airport. He has radioed the ground crew to let them know so the van can be in position when the balloon approaches. Now it’s a matter of easing down by dumping hot air without coming in too quickly; even landing at 7 to 9 miles per hour can be jarring in a wicker basket. Passengers are instructed to hang onto one of the rope handles in the gondola and bend their knees slightly in a sort of brace-for-impact stance, but while the landing is solid it is by no means a tooth-chipper.

The lack of control may be unnerving to another fixed-wing pilot, but it’s now second nature to Smith; besides, he can control the balloon—a bit—by adding or releasing hot air and using a cable that turns the balloon clockwise or counterclockwise, much like the teacup rides at Disney World.

The gondola settles onto a bumpy patch of grass while the crew scurries to secure it and assist the passengers. Then the whole process repeats itself in reverse: The envelope is deflated, folded, and inserted into its bag; cables, tanks, and burner removed and stowed; gondola packed away. No one has called 911—a cause for celebration.

The Smiths say they love the social aspect of hot air ballooning, and that is easy to understand. Friends and family come out to help. Nearly every flight is a celebration—a birthday, an anniversary, a graduation. Passengers are excited to be there, and no two flights are alike.

“We have so much fun,” Meagan Smith said. “The stories we get to hear!...It’s neat to be a part of [the celebrations] in a unique way.” 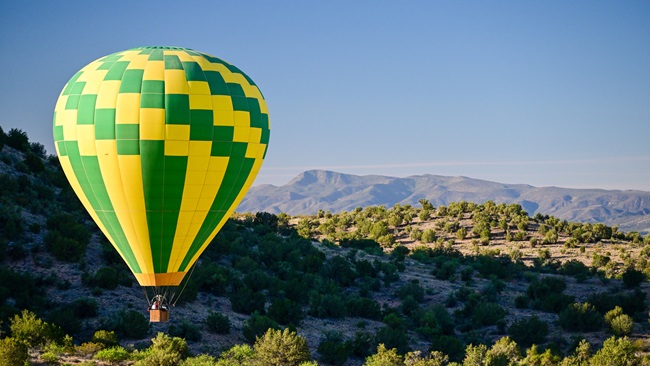 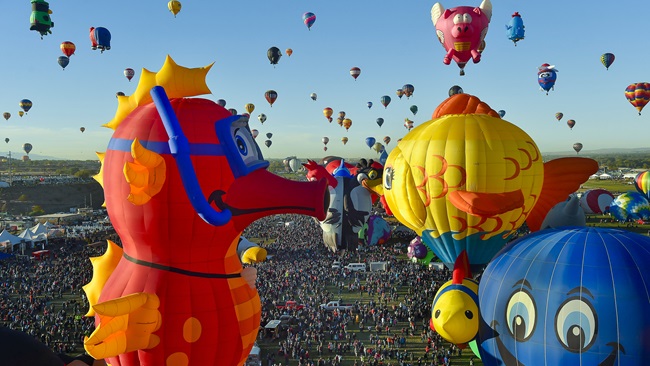 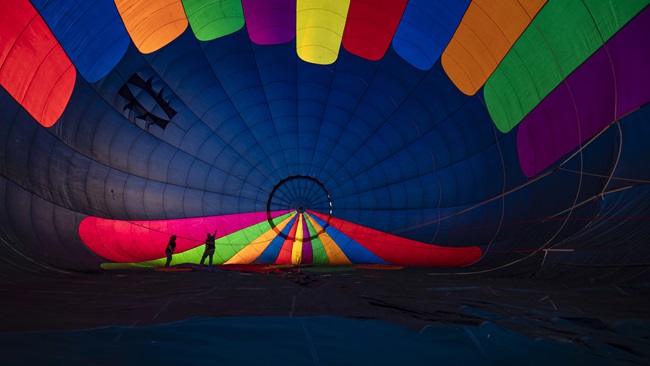