Get the app Get the app
Already a member? Please login below for an enhanced experience. Not a member? Join today
News & Media Moab: High desert splendor

Flying through a timeless landscape

Special thanks to David Churchill and Ivy McIver 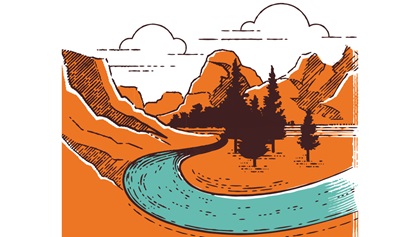 Three mountain clusters near Moab are fascinating to see from the air.

The La Sals, to the south of Moab, are bordered on the south by the town of Paradox. It’s so named because the Dolores River makes a sharp turn to the north there and flows “backwards” all the way to Grand Junction in western Colorado. Dolores Canyon on the east side of the La Sals has gorgeous red rock formations and is a magnet for kayakers and rafters.

The Henrys, about 75 miles west of Moab, are a small, dry, hardscrabble range known by pilots mostly for producing turbulence. The Abajos are south of the La Sals near the town of Monticello. As you fly there from Moab, you’ll see a network of all-terrain-vehicle trails on both sides of the Colorado River. On the west side of the Abajos, sandstone canyons and pinion/juniper forests are almost untouched by even the faintest road or trail.

The red rock desert is storied in literature. Edward Abbey lived near Moab, writing his last novel in a cabin there. The first words of Abbey’s first book, Desert Solitaire: “This is the most beautiful place on Earth. There are many such places.” —DH 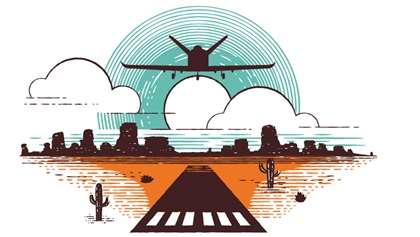 In the run-up area for Runway 21, you warm up the engine for a few extra minutes and let the defroster clear the windshield. Even in late summer, nighttime temperatures are low enough for frost. You want the windshield completely clear to see every detail during the upcoming flight in which you’ll follow the Colorado River downstream to the southwest.

Even though your destination at Page, Arizona, is a mere 100 miles away, your route tracks the winding river through some of the most awe-inspiring terrain in North America. National parks and recreation areas such as Arches, Canyonlands, and Glen Canyon are along your path, although none is yet fully illuminated by the sun.

Click the microphone seven times on the unicom frequency to bring the runway lights to full brightness, line up with the centerline, advance the throttle, and feel the invigorating acceleration as your airplane rolls down the 7,360-foot runway. Once airborne, you climb in a lazy circle over the airport before turning south and overflying the quirky, outdoor-oriented town of Moab where you intercept the river. Following the river also ensures that you’ll remain clear of restricted airspace to the west.

A thin layer of cirrus clouds far above turns neon pink in the gathering light, and towering Mount Peale, at 12,771 feet, casts an imposing silhouette to the east.

Golden light brings the craggy peaks ahead into sharp relief. The air is so clear that the aptly named Orange Cliffs in Canyonlands appear much closer than their actual distance of about 25 nautical miles.

Arches National Park slides under your right wing, and from the air it seems more theme park than natural wonder. Intricate sandstone arches are surrounded by dusty roads that bring visitors in cars to the foot of each one. The exotic shapes are familiar to anyone who has ever watched cowboy westerns—or Road Runner cartoons.

The Colorado River is slow moving and sedate near Moab, but it begins gaining speed as it winds through the steep canyons downstream. Along the way, a potash mine carved into a mountainside serves as a singular landmark, its mirror-smooth evaporation ponds brimming with electric blue water the shade of Aqua Velva.

Moab marketed itself during the Cold War as the “uranium capital of the world.” Now, although mining continues, the place is better known as an outdoor sports mecca, especially for mountain bikers, climbers, BASE jumpers, and off-road vehicle enthusiasts. Canyonlands Field Airport is an adrenaline center itself with skydiving, hot air balloon rides, and scenic flights.

The Colorado and Green rivers meet at the Orange Cliffs where, somewhat surprisingly, the Green appears more substantial than the iconic Colorado.

The sun is well above the horizon now, and honey-colored shafts of light reveal the rough contours of the valley floor. The rock walls that funnel the Colorado River get steeper and narrower, and whitewater rages through Cataract Canyon a few miles below the confluence of the two waterways.

Islands in the Sky is a series of flat-topped mesas that give way to the Needles region of Canyonlands, so-called for the red-and-white banded rock pinnacles that rise from the rocky ground. This area is nearly inaccessible by road or trail, but there are no such barriers to reaching it by air.

The river continues southwest to the Glen Canyon National Recreation Area where it slows and widens into Lake Powell, a massive reservoir formed by the Glen Canyon Dam. The chill is gone from the morning air—and your destination at Page is visible straight ahead.

But it feels too soon. 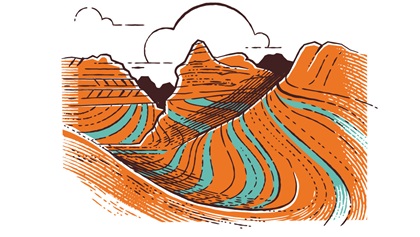 From the east, flying to Moab requires crossing the Rocky Mountains—a move that’s all about timing.

David Churchill, a Maryland pilot who flies to Moab regularly in his Cessna 210 Centurion, says he usually plans an overnight stay in western Kansas or Nebraska so that he crosses the high country in the early morning when winds are light and the sun is at his back.

“You can avoid a lot of terrain by taking a northerly route through southern Wyoming along Interstate 80, or a southerly route through the beautiful San Luis Valley and south to Taos and across,” he said. “A trip like this allows you to see how the country is put together in terms of both terrain and especially its system of rivers. You follow the path of the historic western migration along the Platte and Niobrara to the north, or the Arkansas and Rio Grande to the south.” —DH 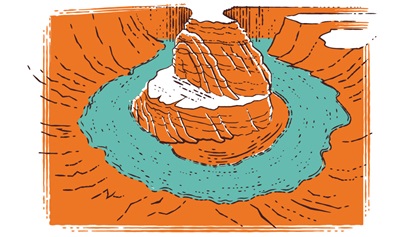 In Moab, Poison Spider Bicycles offers rental bikes, and shuttles that can take you to the top of some of the iconic trails in Moab (Porcupine Rim, Slickrock, and the Whole Enchilada). poisonspiderbicycles.com

Page Airport in Arizona (PGA) has a swanky FBO (Lake Powell Jet Center) and the traffic pattern takes you right over Antelope Canyon, which attracts photographers from all over the world. antelopecanyon.com. Page is also a good jumping-off point for houseboating. If you want to go wildly upscale, the Amangiri Resort is built to blend into the desert landscape—and combines super luxury with desert solitude. aman.com/resorts/amangiri

Bullfrog Basin Airport (U07) is a nontowered gateway to recreation.

Monument Valley Airport (UT25) is a private airstrip with a resort and camping on the property. Make sure to get permission online prior to landing. gouldings.com/amenities/airstrip

Animas Air Park (00C) near Durango, Colorado, is close to a vintage train that runs from Durango to Silverton. It’s a steam locomotive, and during a bike race called the Iron Horse the train leaves Durango at the same time the race starts—the goal is to beat the train to Silverton. You can then take the train back with your bike and drink beer on the train! durangotrain.com 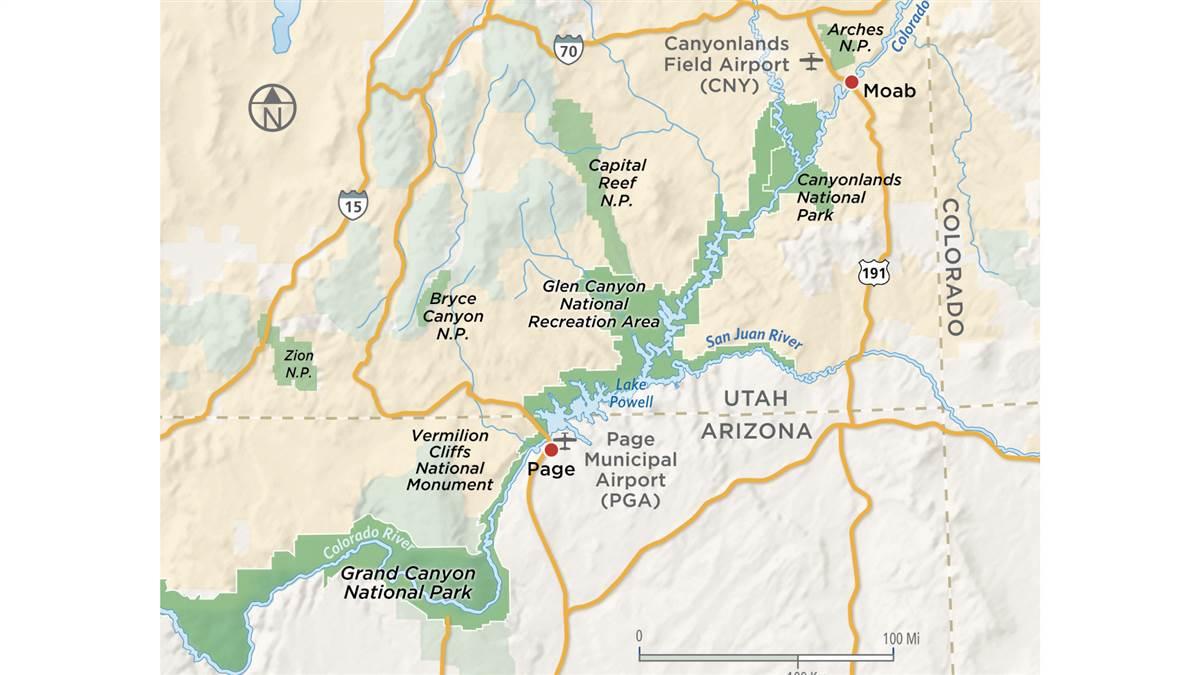 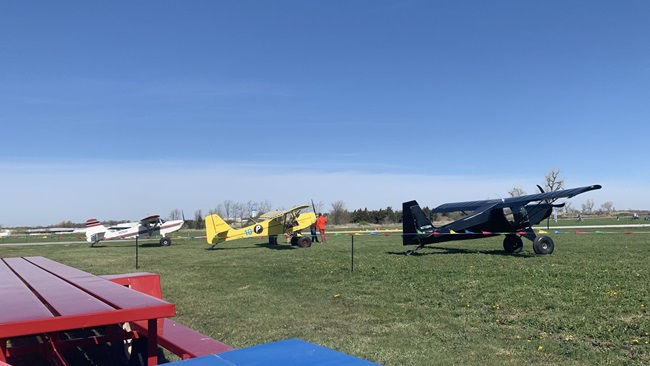 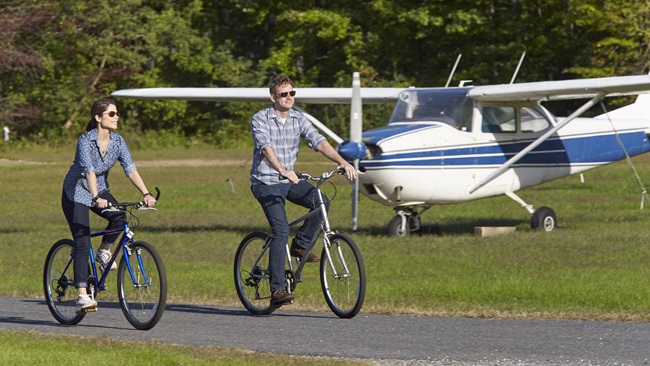 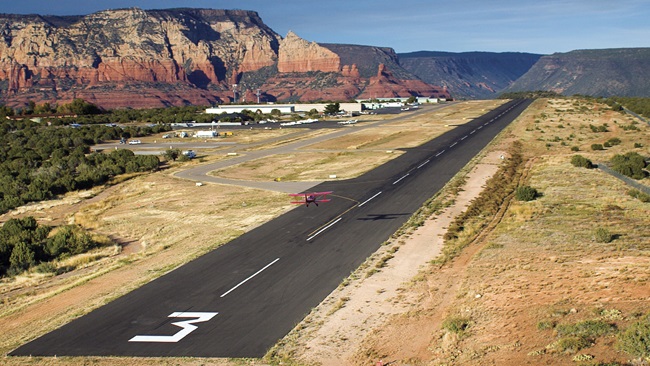