Get the app Get the app
Get the latest news on coronavirus impacts on general aviation, including what AOPA is doing to protect GA, event cancellations, advice for pilots to protect themselves, and more. Read More
Already a member? Please login below for an enhanced experience. Not a member? Join today
News & Media Proficiency: Phoenix can wait

Trouble in the LA Basin

There’s a disclaimer in stock market ads that says “past performance is no predictor of future results.” That caution also applies to aviation. 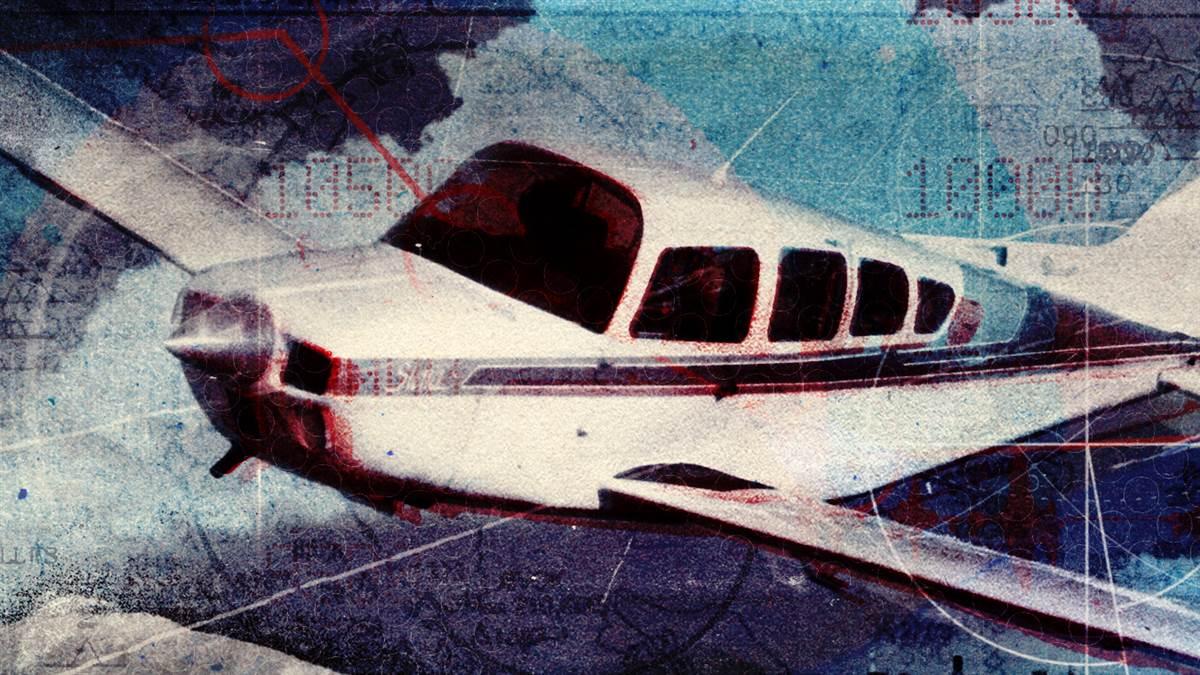 My wife and I live in Los Angeles, her mother in Phoenix, and my favorite A&P at that city’s suburban Chandler Municipal Airport. Good excuses to frequently make the two-and-a-half-hour flight across the starkly beautiful southwest in our vintage Beech Sierra. The familiar trip this time was to take the airplane for its annual—and, of course to visit Gram, as our kids call their grandmother.

The day was Friday, April 29, one day before the annual would expire, putting me into the “must-get-there” mode pilots are taught to avoid. The kids weren’t going this time; maybe that had some influence on my flight planning, if subconsciously. I’d arrived home 24 hours earlier from Europe, nine time zones away; repacked, planned, and prepped; and hit the bed at 3 p.m. feeling like it was midnight. Flight service had told me the prog for today showed only a weak low drifting toward Blythe from the north. I shrugged. No concern—it wouldn’t arrive until midafternoon, by which time we’d be enjoying tacos in Phoenix with Gram. It’d be the usual easy flight: Depart the San Fernando Valley’s Whiteman Airport, climb out across Burbank, left to Pomona, fly eastbound staying north of Ontario, then through the Banning Pass to Palm Springs (PSP) and the vast Southern California/Arizona desert. Pick up V16, hug Interstate 10, enjoy the bleak scenery for the 90 miles to Blythe, cross the Colorado River, 90 more desolate miles to Buckeye VOR west of Phoenix, then direct Chandler. Two point five-ish hours to Grandmother’s house, not a wolf in sight.

Here’s where flying the same path for years causes a problem. I don’t seriously consider trying the southern route, because it’s longer, and I’ve never flown it.Friday, 4 a.m.—early afternoon where I’ve just been for three weeks. I’m wide awake and ready, wife’s showering. We’ll leave at dawn. I call flight service. Oops. Marginal VFR through the LA Basin to Banning, with layers in clouds, tops at 11,000. East of Banning on the other side of the mountains—Palm Springs 9,500 broken, scattered by noon. Beyond there, high cirrus until midafternoon.

The three San Fernando Valley airports are IFR or 1,200 scattered, 3,000 broken, 8,000 broken. Improving slowly till noon. Freezing level? 7,000 feet. Too low to file IFR and no chance for VFR this early. Back to bed? After noon that low will drift southward and buildups will appear between Palm Springs and Blythe.

“But it’s not gonna reach Blythe until late afternoon, right?” Wrong. By midafternoon expect thunderstorms starting out there. By midafternoon jet lag will have me sleepy anyway. I tell the briefer I’ll check again in an hour for an update.

I think for a while. Today’s the day; I won’t put the launch off until the last day of a valid airworthiness certificate unless I absolutely have to. If I get stuck tomorrow, being grounded until I get a ferry permit isn’t my idea of fun. That low freezing level rules out IFR. Today I’m looking at spotty weather here and another possibility of trouble en route. Too much? Maybe we won’t go today after all.

7 a.m. call to flight service: No change. We wait. Without coffee, not when I’m flying more than two hours. It used to be three-plus, but age happens.

10 a.m.: Marginal VFR, 1,500 broken with light rain by 1 p.m. throughout the LA Basin. We could try it, but now that low north of Blythe is approaching our route. I call my Phoenix A&P: “I’m not sure we’re going to make it today.” A pilot, he suggests a route south of the buildups, south to San Diego, east along the Mexico border to Imperial, then back northeast Phoenix. Longer but better weather. The briefer agrees: “If you can get out of the LA area southbound that might be the better way to go.”

But LAX is socked in, and getting through our dense SoCal area means either the VFR corridor over LAX or scud running below the Class B base picking my way around numerous control zones; or IFR, routed around jet traffic in clouds to who knows where with a low freezing level. I tell my wife we’ll go tomorrow. Done.

“Still north of Blythe, light rain expected there in a couple hours, then deteriorating as it moves south across the area.”

We have a window. For a few hours Blythe will still be VFR. I don’t mind a little light rain. In four hours I’ll be getting sleepy. “Grab your suitcase, we’re going after all. Worst case, we overnight in Palm Springs.” Cool, she’s ready, she’s been through this before in our 30 years of marriage. In the car she calls her mother, I call the fuel truck. “Top us off”—we may need it. The last thing I want to think about is fuel.

Tops are 11,000. If we can’t find a comfortable layer, we’ll pick our way through the broken layers up to that altitude. Then after PSP it should be easy.

The normal 45-minute flight this far has has taken almost an hour and a half. We ran out of layers, but not out of options.Here’s where flying the same path for years causes a problem. I don’t seriously consider trying to fly the southern route, because it’s longer, and I’ve never flown it. This one I’ve flown dozens of times. Like a dude ranch nag that heads for the stable at sunset, I am singularly focused on flying east.

Kneeboard and iPad in place, oxygen cannula around my neck, seatbelts tight, headsets on. We read the checklist and crank. The engine fires smoothly. All is well. My wife pulls out the novel she’ll use to pass the time—and distract herself from any concern.

Noon: The valley is completely clear. Puffy clouds begin 15 miles east, with big layers I can see from here. I head north, climbing. I tell SoCal Departure we’ll go that way until 5,500 feet and then turn back across Burbank and east to the Banning Pass, 70 miles away. The Banning airport sits at 2,400 feet msl; the mountains on either side rise steeply to above 10,000. If the layer closes up before Banning? Worst case, I’ll make a one-eighty, announce impending IMC, request IFR vectors at or below 5,000 feet to the closest airport. There are lots of them in the LA Basin.

Over Pomona the ground under us disappears. I climb to stay VFR, advise the controller, and head up to 7,500. I can tell from the radio chatter that there aren’t a lot of other VFR fliers out.

Twenty miles farther, higher buildups. I need to turn southeast to skirt them. That’ll put us near the approach course for LAX arrivals; ATC doesn’t like you there. But the controller grants it. I turn the Sierra toward the path of the big jets descending westward.

I hear, “American Four-Two-Three, traffic at 10 o’clock and 7,500 feet, a Beech Sierra dodging some buildups.” Then a few seconds later the same call to a United flight. I watch them go by the windscreen not that far away, not that far above me. Bless you, my radar friends.

Once around the buildup, I advise SoCal and turn back to 080. There are still lots of clouds ahead, and I’m so buried in the challenge before me that I don’t think of the southern route option. This would have been the moment to ask ATC to help me cross the LAX arrivals path and get around the weather.

Instead, I proceed east, and before we make it out of the LA Basin, I’ve climbed to 11,500 and am still skirting higher tops here and there. SoCal Departure is an enormous help, letting me turn and climb as needed. I begin sucking oxygen—this isn’t the time to become lightheaded.

Over Palm Springs the cloud tops abruptly drop below 9,000 feet and great swaths of the low desert become visible to the south and east. We’ve made it! I start a descent toward 9,500 feet and announce to my wife we won’t be stopping at Palm Springs. She casually pulls her head out of her book and nods.

Leaving PSP I’m handed off to Los Angeles Center. The ride is smooth, the weather beautiful. Blythe is 40 minutes away. There we’ll be halfway to our destination. We’ve even got a little tailwind.

I lock altitude hold, grab a cookie from the food bag, and settle back to reflect. The normal 45-minute flight this far has taken almost an hour and a half. We ran out of layers but not out of options. If we’d run into a wall of white I would have turned around. If we’d lost an engine, I was already talking to ATC. Descending through the clouds would expose us to icing for only moments, I reasoned, and what little we might have picked up would melt off in the warmer air below. And here we are now, happily skipping over the cumulus humilis, to Grandmother’s house we go….

But like in the fairy tale, the wolf lies in wait: ForeFlight paints a light shower ahead, with a long dark green patch 15 miles left of our course, drifting toward our path. In the Midwest I’d have called it a squall line.

Nearing Blythe I can see it: That “light shower” has grown fangs and extends across our path, its tops at our altitude and rising. Time to put away the cookies. I make a pilot report and start a climb to 11,500 but the white monster is climbing faster than we are. Then it suddenly picks us up and carries us with it. Our rate of climb shoots to 1,100 fpm. My wife turns a page in her book, afraid to look up?

We’re at 14,500 feet now. The puffy thing looms even higher, darkening by the minute. Back on oxygen, I look to the north—more dense, dark clouds above and below. To the south it’s clear. I turn right 45 degrees, heading toward a restricted area 10 miles away. “Is it hot?” I beg Center.

“Affirmative, it’s currently hot to Flight Level One Eight Zero.” We’re not going to make it around the monster before running into legal problems—or worse. There’s no going forward or around this fast-developing desert thunderstorm, and proceeding on course at this altitude—at any altitude—we’ll find ourselves in pieces on the desert floor.

I make a one-eighty and key the mic: “L.A. Center, we’re going to head back to Palm Springs, we’re not going to be able to get around this guy.”

Center acknowledges. I level off at 10,500 westbound and relax a bit. In half an hour our wheels squeak onto Palm Springs’ Runway 31L. The nice folks at Atlantic Aviation take us to a hotel in town; we make the requisite phone calls and have a nice dinner. Strangely enough the beautiful evening turns out to be exactly what we needed. While we sit in the warm desert air chatting about life, the sun sets over the mountains, the moon comes out. It’ll be CAVU all the way soon. We could jump in the airplane and fly on tonight….

But instead we submerge ourselves in the hotel’s Jacuzzi and discover that romantic evenings can happen at the most unexpected times. Tomorrow the wolf will have retired to his lair and Gram will still be happy to see us.

Ben Moses is a TV and film producer with more than 3,400 flight hours who lives in Los Angeles, California. 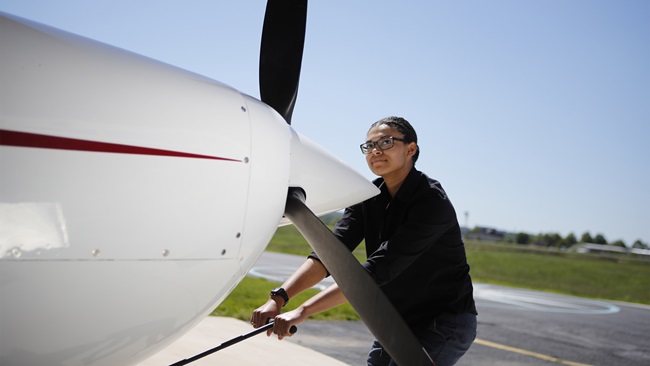 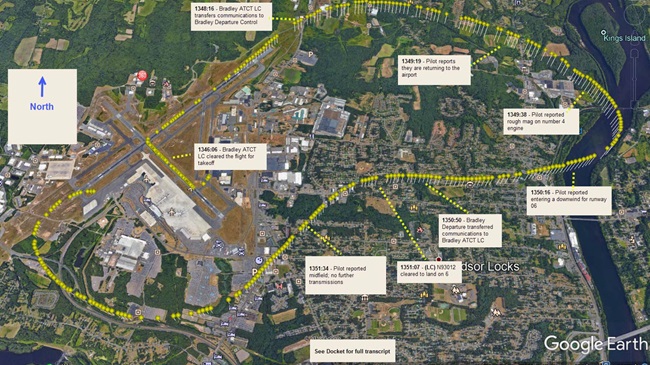 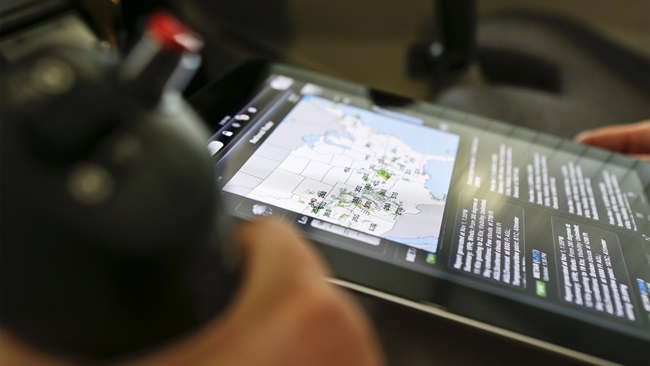