Get the app Get the app
Already a member? Please login below for an enhanced experience. Not a member? Join today
News & Media Piaggio Royal Gull: ‘Way ahead of its time’

Piaggio Royal Gull: ‘Way ahead of its time’

A lifelong infatuation—and some epic adventures

The Piaggio Gull imprinted itself on John Mohr’s mind when he was a young boy. 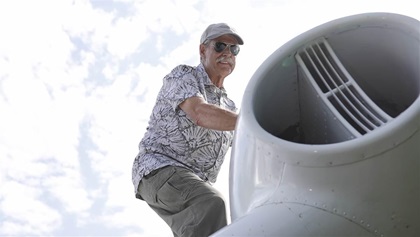 “Everything about it was so distinctive and so striking. Even the sound of those two geared engines stood out in my young mind.”

One of the big, stylish, Italian seabirds splashed into his grandfather’s seaplane base at Crane Lake in northern Minnesota in 1960, and Mohr was entranced. That Gull was taking a group from Duluth to a remote fishing lodge—and the sleek twin with growling Lycoming engines was a fast and fashionable way to get there.

“The airplane made quite an impression on me, even though I was about 5 years old at the time,” said Mohr, who had notable aviation careers as both an airline pilot and airshow performer. “I never forgot the Gull, or the first time I saw it. Everything about it was so distinctive and so striking. Even the sound of those two geared engines stood out in my young mind. It sounded like a P–51 [Mustang].”

Decades later, while Mohr was raising his family, he went in search of a seaplane for recreation and adventure. The iconic de Havilland DHC–2 Beaver was beyond his price range. He was intrigued by flying boats after an introduction to a Grumman Goose, but those were even more costly to own and operate than the Beaver.

Then he saw an ad for a derelict Gull—a restoration project. The fact that the aircraft was in pieces didn’t bother Mohr, an airframe and powerplant mechanic who liked doing his own work. And the price was right. Few U.S. pilots knew about the Gull, and those who did were put off by its scarcity, metric parts, and geared engines. Mohr bought the project, and then got busy improving it.

Reversable propellers were at the top of his wish list, and he located a Gull with that modification in Texas. He visited the airplane and met the owner, and later bought that airplane—pictured here—in 1993.

“The first Gull I flew was the one in Texas,” he said. “My wife and son came with me for the ferry flight home to Minnesota, and that was the first of many adventures with it.”

Since then, Mohr has flown the Gull to Alaska, the Bahamas, Central America, and Europe, as well as numerous trips to arctic Canada. He’s landed his 1956 airplane on Loch Ness in Scotland, been awakened by a herd of musk ox, and been visited by a hybrid polar bear/grizzly in the Arctic while logging about 2,000 flight hours in the airplane.

The Gull was originally certified in the acrobatic category in Europe, but here it’s operated under utility rules. And Mohr, a master aerobatic pilot who performed for decades in a Stearman PT–17 biplane, has never looped or rolled it.

“I don’t want to tumble these old gyros,” he said. “It’s hard on the equipment.”

Mohr also has become the go-to guy for Gull owners and pilots seeking technical information, annual inspections, and supplemental type certificates. Of the 30 or so Royal Gulls imported to the United States in the 1950s and 1960s, just four are currently flying. Several more are being restored—including the project Mohr originally purchased years ago.

And Mohr is an advocate for owners, their aircraft, and even their engines.

The first thing that stands out about the Gull is its hulking size. You don’t have to crouch to walk under its upturned wings, and their massive dihedral makes them far taller at the tips than their thick roots.

Cooling air is directed to the engines through long ducts that hang over the leading edges of the wings, and three-blade, feathering, reversible, Hartzell pusher props are placed behind the trailing edge where they’re mostly protected from spray. Two 95-gallon fuel tanks are placed in the fuselage, not the wings.

The main landing gear retracts upward and inward and doors cover the brakes but not the tires themselves—which partially stick out after retraction. The retracted tailwheel is sheltered by the keel above the waterline.

A retractable water rudder deploys forward of the tailwheel.Flaps cover most of the trailing edge of the wing and droop to a maximum 45 degrees. Lift flaps (about 20 degrees) are used for both water and ground takeoffs.

A spacious cargo compartment that holds up to 300 pounds is located in the aft fuselage. A couple of thick pegs serve as steps to allow access to the tops of the wings for fueling and engine servicing. The metal work is both practical and sturdy but also beautifully sculpted with multiple compound curves.

The cockpit is roomy with a plush bench seat for three, and adjustable pilot and co-pilot seats. The old-school analog instrument panel is unusually low and the canopy and big side doors provide exceptional visibility.

The floor-mounted throttle quadrant is between the pilots—not overhead as with other multiengine seaplanes—and engine start and runup are normal for carbureted, piston engines.

Takeoff acceleration from a grass strip with two people and half fuel tanks is moderate with the geared engines at their 3,400 rpm redline. The Gull stands at a relatively flat attitude on the ground, and its main landing gear is mounted far forward of the center of gravity so raising the tailwheel requires firm forward elevator pressure.

We’re off the ground in about 10 seconds and 800 feet of ground roll at 80 miles per hour, raise the gear, and accelerate to 100. Mohr reduces engine rpm to 3,000 at pattern altitude and accelerates to 120 for a cruise climb.

Control pressures are light and remarkably well balanced. The Gull is stable in roll thanks to its pronounced dihedral, and there’s a substantial adverse yaw, so pilots must keep their feet active to coordinate turns.

Stalls are preceded by mild airframe buffeting with or without flaps, and the right wing drops at the stall break (and the break itself is sharper with flaps down). Recovery is normal (reduce angle of attack and add power) but not instantaneous, and it takes a few seconds for the ailerons to regain effectiveness.

Approaches to water landings typically use full flaps and partial power until touchdown. Mohr deploys the flaps at 120 miles per hour and flies water approaches at 100, then slows to 85 on short final. Touchdowns take place at about 82 mph and the keel skims the surface for a few seconds before settling in at about 65 mph and rapidly decelerating.

With both a water rudder and two reversible propellers, the Gull handles with precision on the water. The right side of the canopy can open forward, enabling a crew member to tie up to the cleat on the bow or use an anchor. When approaching a dock, the pilot can control speed easily and turn with authority (and a very small radius) using any combination of differential power, water rudder, or reverse thrust.

Water takeoffs are astonishingly short at about 12 seconds—roughly the same amount of time (and a little more distance) than an amphibious Piper Super Cub. And there’s virtually no pitch change during the transition from watercraft to aircraft. The Gull’s windshield stays dry as it accelerates onto the step.

“The pilot can literally keep his hands off the yoke throughout a water takeoff,” Mohr said. “The airplane has very little tendency to porpoise.”

Runway landings are typically three-pointers. Full flaps, gear down (three green indicator lights on the panel and confirm with the mirrors on the pontoons). Approach at 90 mph, carry some power into ground effect, hold a 5-degree nose-up attitude, wipe off the power, and work the yoke aft.

The locking tailwheel keeps the airplane tracking straight ahead after touchdown, and the airplane rolls out in about 1,000 feet in calm wind with light braking. But don’t unlock the tailwheel too soon.

“The big vertical stabilizer and long moment arm make it easy to ground loop when the tailwheel is unlocked,” Mohr said. “Wait until you’re almost stopped before you unlock it.”

The Piaggio Gull (P.136) first flew in 1948 but the prototype’s Franklin engines didn’t produce sufficient power. Subsequent versions with Lycoming GO-435 and GO-480 versions increased power output, and a supercharged GSO-480 on a few airplanes raised their ceiling beyond 25,000 feet.

The Italian military was an early Gull customer—but an American machine tool magnate, Francis J. Trecker, also saw promise in the design. Trecker wasn’t a pilot, but he saw the airplane during a 1954 trip to Italy and was convinced it was an ideal aircraft to whisk hunters, fishermen, and guides to wilderness lodges, and to shuttle luxury customers among metropolitan airports, islands, yachts, and vacation destinations.

He launched the Trecker Aircraft Corp. in Wisconsin, rebranded the airplane as the Trecker Royal Gull, and up to 35 U.S. workers installed avionics and engines in aircraft shipped from the factory in Genoa, Italy. From 1956 until 1961 about 30 Gulls were imported and sold at list prices of more than $75,000 (or about $275,000 in adjusted dollars).

Yet the Gull never caught on in a big way, and manufacturer Piaggio saw more promise in a land airplane version (the P.166). Eventually, it morphed into a turboprop and that began a series of larger, faster versions that evolved into the company’s flagship P.180 Avanti.

The Gull has always been a pilot’s airplane—but today it takes a special pilot to make it work. Mohr is one of the very few with the skills, commitment, and the technical savvy to operate and maintain it—and it’s a big job.

The Gull that Mohr first saw as a boy? It was subsequently wrecked in a lake in New York, submerged, and then recovered. Mohr owns the parts, and they’re stored in his hangar where they’ll eventually be refurbished and fly again in the airplane he’s restoring.

“The Gull was way ahead of its time,” he said. “The reason I’ve had mine for so long is that nothing else can do the things that it does. It’s as fast as a Caravan on floats. It takes off and lands on the water like a Super Cub. An amphibious Beaver or Cessna 185 can’t touch its range or endurance. The Gull is one of those rare airplanes that, the more you’re around it, the more you appreciate it.” 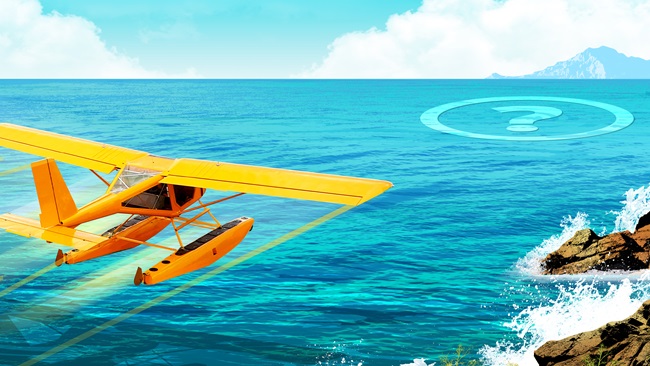