Get the app Get the app
AOPA Members DO more LEARN more SAVE more - Get MORE out of being a pilot - CLICK HERE
News & Media Proficiency: Overextended

Proper use of flaps requires understanding of the aerodynamics

On a recent practical exam, I asked my commercial pilot candidate, Joe, to perform a power-off 180 landing. 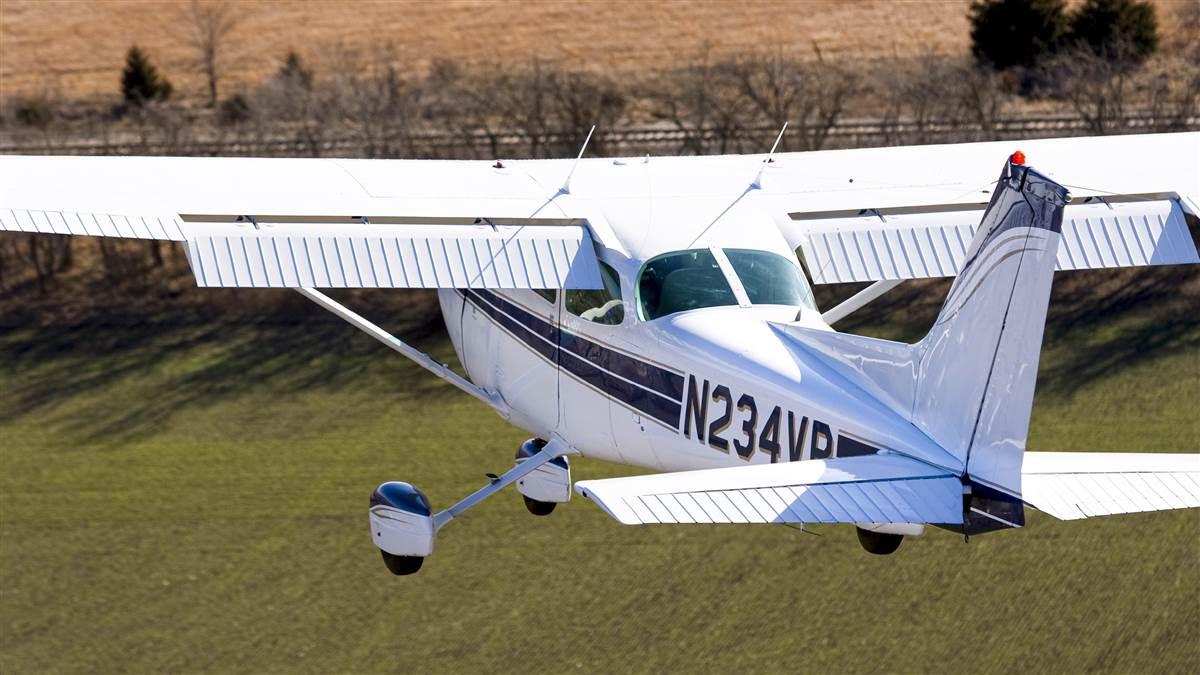 It’s one of my favorite maneuvers as it requires not only an intimate familiarity with the drag characteristics of the airplane but variations in winds will ensure no two will ever be flown exactly the same way. Based on whether the aircraft appears to be on path for a long or short landing, the pilot needs to add drag or reduce it accordingly. Believe it or not, we examiners really are silently cheering our candidates on. When it looked as though Joe was a tad low on base, I found myself unconsciously leaning to the left as if I could somehow will the airplane toward the runway. On short final, it looked like we might just barely make the 1,000-foot markers after all when Joe extended the flaps and sealed the deal. My heart sank when we plopped down well short of his intended point of landing. After he shut down on the ramp, I was barely able to hide my incredulity and exasperation as I asked Joe why he added flaps on short final. Joe explained, “I was coming in a bit short, so I added flaps to increase lift. I’m not sure why that didn’t work.”

Many aerodynamics lessons we get from the literature and ground school are oversimplified. Things like, “The first notch of flaps is all lift and after that, it’s mostly drag” really aren’t helpful in deciding when to use flaps in a given situation. While it doesn’t take a doctorate in aerodynamics to fly an airplane, we should have a more nuanced understanding of aerodynamics and, in particular, the effects of introducing flaps. 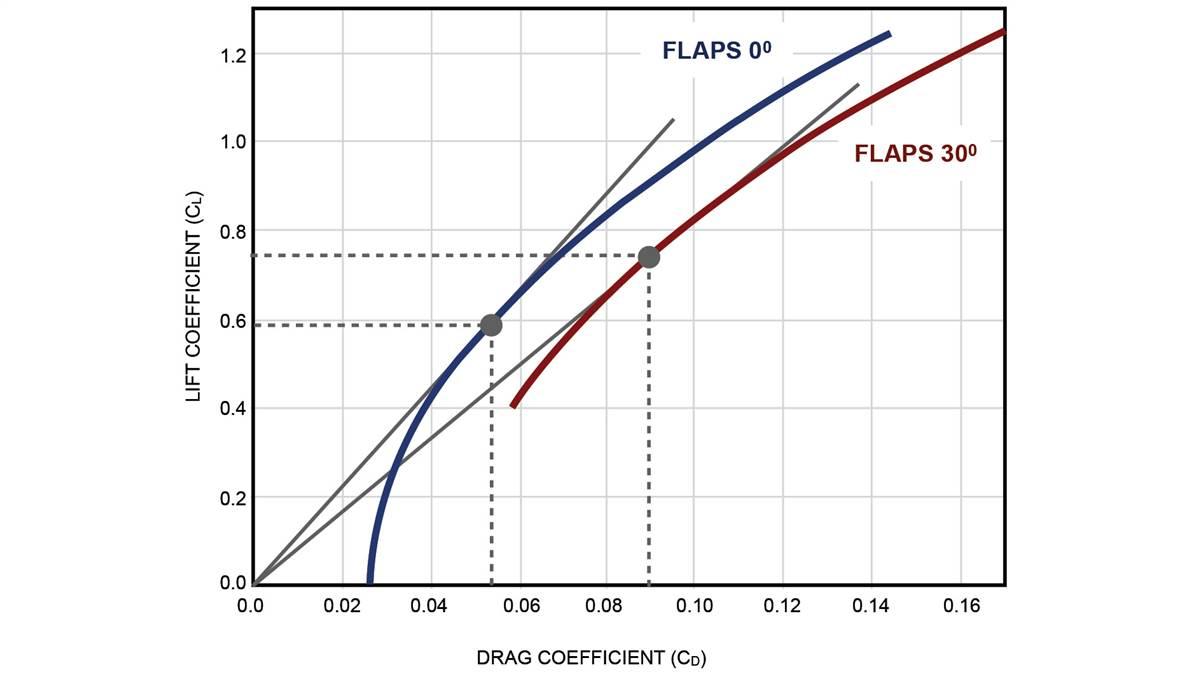 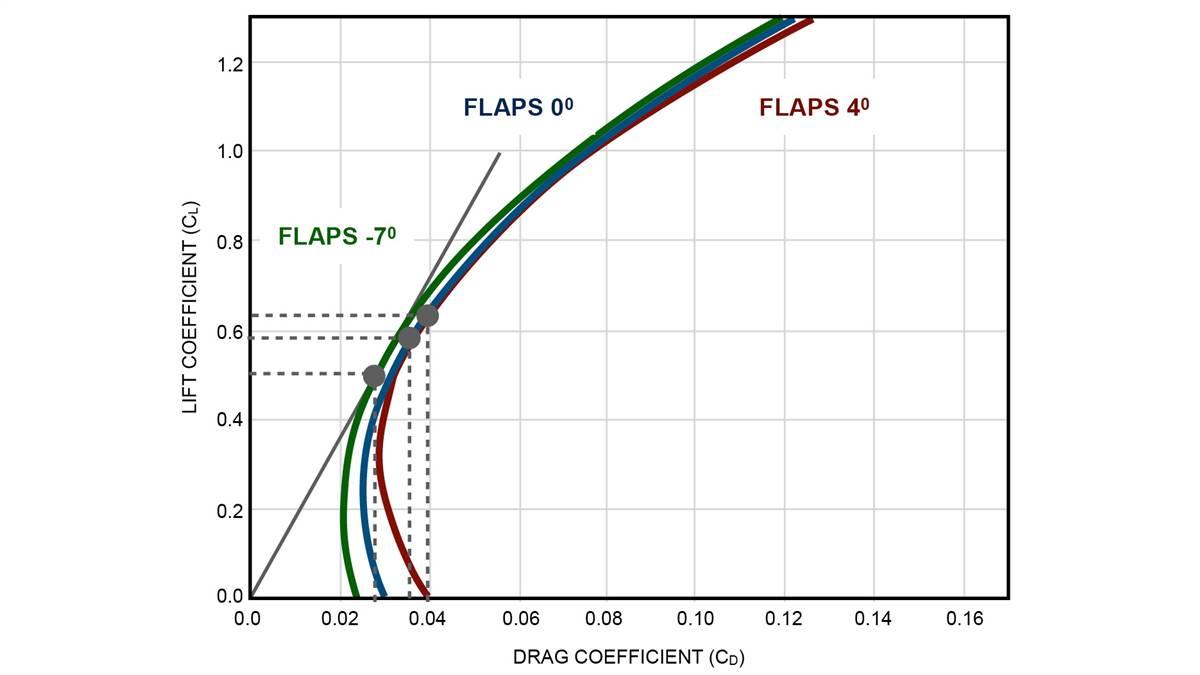 The clean best glide ratio for the Lancair 360 is 16.4 and with flaps extended 4 degrees downward, that value is reduced slightly to 16.3. But this aircraft has a reflex feature and with flaps set 7 degrees upward, the glide ratio becomes 18. In this configuration, the Lancair will glide 10 percent farther than it would with no flap extension.

Visualizing the effects on glide ratio

A drag polar for a gliding aircraft is a way to compare the efficiency of the aircraft with changes in lift and drag. In particular, to find the most efficient configuration, connect a line from the origin to a point on the curve so that the slope of the line is the same as the slope of the curve. (Mathematicians call this a tangent line and its slope is (CL/CD)MAX.) That combination of lift and drag will result in the greatest distance forward per unit of altitude loss. The drag polars shown at left for the Lancair 360 MKII performed by C. Zavatson (n91cz.com/Performance/Cruise_Flap_Report.pdf) as well as that for the Cessna Cardinal by NASA (NASA-CR-2337, “Flight Test Data for a Cessna Cardinal”) above were redrawn from the respective references. The reduction in glide ratio with positive (downward) flap deflection means you are not likely to find flap extension as part of an engine-out procedure to extend the glide. In fact, reflexed flaps (deflected upward) can significantly boost glide distance. —CC

For more details on the effects of flaps, see the video: Catherine Cavagnaro

Ailerons were the predecessor of flaps as we know them today. In A History of Aerodynamics, John D. Anderson explains that aviation pioneer Henri Farman set out to achieve lateral control of his aircraft without copying the wing-warping design of Wilbur and Orville Wright. He mounted flap-like surfaces on the outboard trailing edges of the wings that could be used to turn the aircraft. The downward deflected aileron increased the camber and lift of its wing while the upward deflected aileron decreased the lift on the other wing. As we know from our first flights as student pilots, the wing with the greater lift also incurs a greater drag force and, for the attendant adverse yaw, we compensate with rudder in the direction of the turn to maintain coordinated flight.

Anderson explains that flaps extended downward increase the coefficient of lift and, all other factors such as airspeed and wing area remaining the same, means that the lift increases. But they also cause an increase in drag and with both quantities raised, it begs asking about their net effect. For example, if both my salary and living expenses increase, it’s not clear if I’m doing any better; the difference (increased salary-increased expenses) might be a helpful metric. For lift and drag, a traditional metric is L/D or lift-to-drag ratio since that’s also our glide ratio when the engine quits.

Let’s review some of the effects of extending the flaps during flight.

Adding flaps raises the coefficient of lift as well as the wing area itself for certain flap designs. Assuming that other factors such as airspeed stay the same, that means a greater lift force. Extending them also reduces stall speed which means that we can rotate earlier in the takeoff roll and get off the ground sooner, which is helpful especially on unimproved strips. A lower climb speed can provide a better climb gradient to clear an obstacle although we convert to a lower pitch angle as soon as possible for better engine cooling and an improved climb rate.

A lower stall speed can be an important ingredient in the famous canyon turn when a tight turn is necessary to reverse course in areas of rising terrain (see “Take it to the Bank,” May 2020 AOPA Pilot). In a no-wind situation, reducing the airspeed by 15 percent cuts the turn radius by almost 28 percent, so lowered flaps are typically part of the recipe for an optimal canyon turn.

The ability to use a low approach airspeed is especially important for those who fly aircraft that are primarily designed with cross-country cruise speed in mind as the stall speed tends to be high as well (see “The Perfect Aircraft for the Mission,” September 2019 AOPA Pilot). Converting from an aerodynamically clean wing to one with higher camber allows those efficient aircraft to alight with the grace of a bird. Because stopping distance is a function of the square of ground speed, even a modest reduction in approach speed can steepen the approach angle and profoundly shorten the landing roll.

Depending on aircraft configuration, extending flaps can change the pitch angle of the aircraft in a favorable way. For example, lowering the flaps in my Beechcraft Bonanza while maintaining the same approach speed provides for a lower pitch attitude and an increased likelihood of seeing the runway complex upon breaking out of the clouds on an instrument approach.

Nothing in life is free, and extending flaps exacts the toll of greater drag. Correctly weighing the benefits and disadvantages of this simultaneous increase in lift and drag is important for each particular phase of flight. Upon engine failure (in a no-wind condition), using the best glide airspeed will ensure that the aircraft glides the greatest distance per unit altitude loss, or (L/D)MAX (or (CL/CD)MAX). Generally speaking, lowering the flaps hurts cruise performance and glide distance. Some aircraft such as Lancairs and Maules feature a position called reflex that deflects the flaps in a negative direction that allows a higher cruise speed with a decrease in drag. This reflex position can also be used to advantage in an engine-out, gliding situation. Lift and drag simultaneously decrease but the increased lift-to-drag ratio allows better glide performance (see “Flaps and Drag Polars,” right).

While extending flaps can reap benefits in takeoffs, maneuvering, and landings in tight areas, a better knowledge of their aerodynamic effects can help us use them wisely. If you’re coming in low for that power-off one-eighty or, more important, for that emergency landing in a confined area, it’s probably best to leave them retracted until a touchdown in the desired spot can be assured.