Get the app Get the app
Already a member? Please login below for an enhanced experience. Not a member? Join today
News & Media What went wrong? Pressing on

What went wrong? Pressing on

On a Friday morning in mid-May 2017, a pilot and his passenger prepared to depart from Davenport Municipal Airport, Davenport, Iowa (DVN) to Northwest Alabama Regional Airport, Muscle Shoals, Alabama (MSL) in a Beechcraft Bonanza A36. 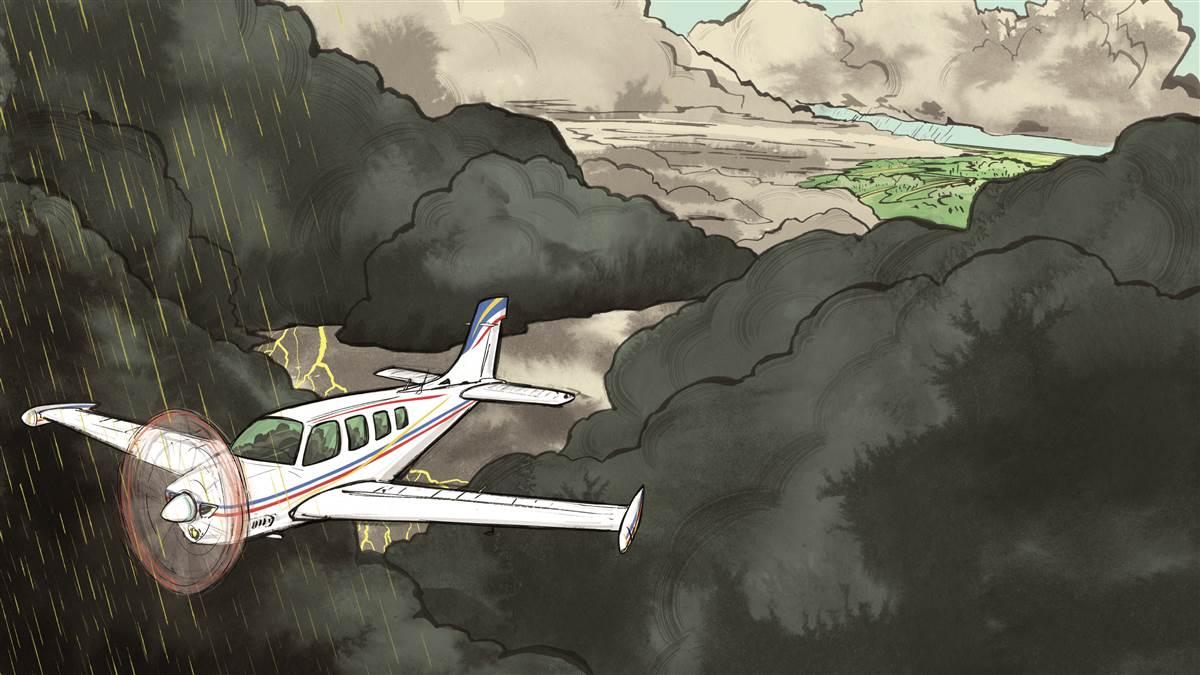 If you use onboard weather, make sure you understand latency, and always double-check the timestamp on in-cockpit weather displays. Learn about an accident where latency was an even bigger factor in the AOPA Air Safety Institute’s Accident Case Study: Time Lapse (airsafetyinstitute.org/ACS/timelapse).

The weather at Davenport was favorable, and the flight was supposed to take less than three hours—they’d be in Muscle Shoals in time to start their vacation with a late lunch.

Even though the weather in Davenport was VFR, conditions along the route of flight were marginal and the forecast was for worsening conditions, IFR with widely scattered thunderstorms—a fact the pilot was possibly unaware of since there is no record that he obtained a thorough weather briefing through flight service or other aviation weather sources.

The 69-year-old, non-instrument-rated private pilot had flown for more than 20 years and accrued about 725 hours. Of that, 71 hours were simulated instrument and 16 were actual instrument, for a total of just more than 85 instrument hours logged. But it had been a while since he’d done any flying either under the hood or in the soup—his last logged simulated time was years before, 1.6 hours between 2005 and 2009, with his most recent actual time in April 2000.

The airplane was equipped with a portable Garmin GPS receiver and an Appareo Stratus 2S ADS-B receiver. A Stratus provides in-flight weather information via the government’s free ground-based system, Flight Information System-Broadcast (FIS-B) and is compatible with ForeFlight Mobile, which the pilot had on his iPad. That morning, the pilot used ForeFlight to access the Extended Convective Forecast Products, but there’s no evidence that he checked anything else like the TAF, area forecast, or notams.

The flight began smoothly, and the pilot picked up VFR flight following. At 11:06 a.m., Kansas City called N04E with information about the weather:

“Is there any uh, any bad stuff? You know, any thunderstorms in there?” the pilot asked.

“I can’t show whether or not thunderstorms,” the controller said. “It just tells me precipitation and it is indicating moderate and heavy.”

“OK, what’s the tops?” the pilot continued, perhaps hoping he could climb over it.

“I don’t have the tops reports, zero-four-echo.”

“OK I might want to go up to seventy-five hundred.”

The non-instrument-rated pilot decided to push through the weather. If he made it to the other side, where the weather improved significantly, he’d be to his destination in less than an hour to start his vacation.Undeterred by the report of a band of moderate and heavy precipitation, 55 miles deep and less than 20 miles away, tops unknown, the pilot continued on a southbound heading, hoping his change in altitude would allow him to get to Muscle Shoals.

As the Bonanza approached Kentucky, now at 7,500 feet, the band of precipitation between him and Muscle Shoals required him to alter his route. Through the next several sectors, controllers assisted the pilot. First, they guided him east toward a VOR that would keep him north of the precip. At 11:30 and after several vectors to avoid the weather, the pilot asked ATC, now Evansville Approach, for the conditions at nearby Tradewater Airport (8M7) in Dawson Springs, Kentucky. The controller said he could look up those conditions, and also said that it looked better to the south. The pilot continued.

The pilot then asked about the weather at nearby Sturgis Municipal Airport (TWT) in Sturgis, Kentucky. The controller informed him that the airport was closed, but since he was VFR, he could head that way under his own risk—only the taxiways were closed, not the actual runway. The pilot declined. The weather continued to deteriorate, and the pilot had descended from 7,500 feet to around 3,000 feet msl (about 2,500 feet agl), to contend with lowering ceilings, which were falling as forecast. Time to divert was running out.

At 11:41, Evansville handed the Bonanza off to Fort Campbell.

“Evansville said that you guys might want to land somewhere,” said the controller after N04E checked in.

Fort Campbell suggested nearby Outlaw Field (CKV) in Clarksville, Tennessee, which had the enticing promise of a full-service FBO, 8 miles visibility, and a ceiling of 1,100 feet agl.

Two minutes later the pilot changed his mind. It seemed that his onboard weather presented a more favorable picture, and he asked ATC to confirm what he was seeing.

“Yeah, uh, I am looking at my, uh, weather here, if I don’t land here, uh it looks like I will be clear here in just a little bit is that correct?” the pilot asked.

Fort Campbell responded with the weather in Muscle Shoals: visibility 10, ceilings at 6,000. Nashville was even better with a ceiling at 7,000 feet.

“So, it looks like it’s much clearer down south,” the controller affirmed.

“How about if we don’t land here and we go back up to, oh, I don’t know, thirty-five hundred for now and let’s get clear of this stuff,” said the pilot.

Diversion abandoned, the non-instrument-rated pilot decided to push through the weather; it would likely be just a few minutes in the precip. If he made it to the other side, where the weather improved significantly, he’d be to his destination in less than an hour to start his vacation.

At 11:49:21 a.m., Fort Campbell approved a VFR climb, and asked the pilot if there was a good heading to help him get around the weather.

It was the last call he made.

A minute later, at approximately 11:52 a.m., N04E’s radar return went into “coast,” meaning the actual return had been lost, and the computer was making a predictive best guess on the controller’s display.

A witness on the ground heard a “high engine revving sound” but couldn’t see the airplane because it was in the clouds. Seconds later, the witness heard the sound of an impact.

Fort Campbell tried to reach the pilot multiple times, and at 11:54 a.m., called radar contact lost and began the process of alerting search and rescue.

Soon after N04E disappeared from radar, a special surface weather observation was issued for Campbell Army Airfield, located about 16 miles southeast of the accident site. The ceiling began at 1,100 feet agl, with moderate drizzle and 10 miles of visibility. Reports indicated that the tops were around 32,000 feet msl.

The wreckage was found near the last radar blip; both pilot and passenger were dead. A Bonanza A36’s never-exceed speed is 202 knots; evidence from the accident indicated a final airspeed of 211 knots.

The NTSB listed the probable cause as the non-instrument rated pilot’s intentional visual flight rules flight into instrument meteorological conditions (IMC), which resulted in a loss of airplane control due to spatial disorientation. Contributing to the accident was the pilot’s overreliance on his limited instrument training.

While the overall GA accident rate is trending down, on average, more than 80 percent of VFR- into-IMC accidents each year are fatal. Like many of those, this accident could have been prevented.

Although the pilot did view the convective outlook on ForeFlight, there’s no record that he accessed any additional information like the area forecast or TAFs for his route of flight. Had the pilot received a full weather briefing, he would have known that the weather in Kentucky for the time of his flight was forecast to be marginal VFR and becoming IFR with widespread thunderstorms. A TAF for Clarksville issued prior to the pilot’s departure from Davenport called for broken ceilings at 600 feet agl. Additionally, at the time of the accident, there were airmets Tango for turbulence, and Sierra for IFR conditions and mountain obscuration.

The pilot may have felt comfortable skipping a weather briefing knowing that he had a Stratus and ForeFlight with him. And while onboard weather increases situational awareness, it alone is not enough—a complete weather briefing is a must before multi-state long cross-countries. Whether ground based or satellite based, onboard weather services all experience some degree of latency. In some cases, radar can be delayed by more than 15 minutes. Because of this, using onboard weather receivers to pick your way through inclement conditions, as this pilot attempted in the final minutes of the flight, is not recommended.

The pilot passed up multiple diversion-worthy airports in the time between learning of the band of weather ahead of him and the crash—even abandoning one at the last moment in favor of flying into IMC. The pilot and his passenger were flying for vacation—perhaps self-imposed pressure to stick to the plan added to the pilot’s unwillingness to delay his journey.

The pilot’s final, fatal error was deliberate VFR flight into instrument conditions. Time and time again, spatial disorientation overcomes pilot skill with fatal results, and perhaps the biggest takeaway from this accident should be just how severe and unforgiving it is.

Trained and current instrument pilots succumb to spatial disorientation; this private pilot whose most recent instrument time was years ago underestimated the difficulty of instrument flying, to his and his passenger’s demise. With the promise of better weather on the other side, as he’d seen on his display and as verified by ATC, and after passing up many diversion airports, he incorrectly relied on his 85 or so instrument hours, acquired piecemeal over 20 years, to get him to the other side of the wall of weather. Unfortunately, he overestimated his skill, underestimated the conditions, and quickly lost control of the airplane with the most severe consequences.

Safety Spotlight: The runway behind you