Get the app Get the app
Already a member? Please login below for an enhanced experience. Not a member? Join today
News & Media Flight mastery

How gliders, tailwheels, and aerobatics can make you a better pilot

A first-year medical student asked an innocent-sounding question at the conclusion of a lecture that he quickly came to regret. 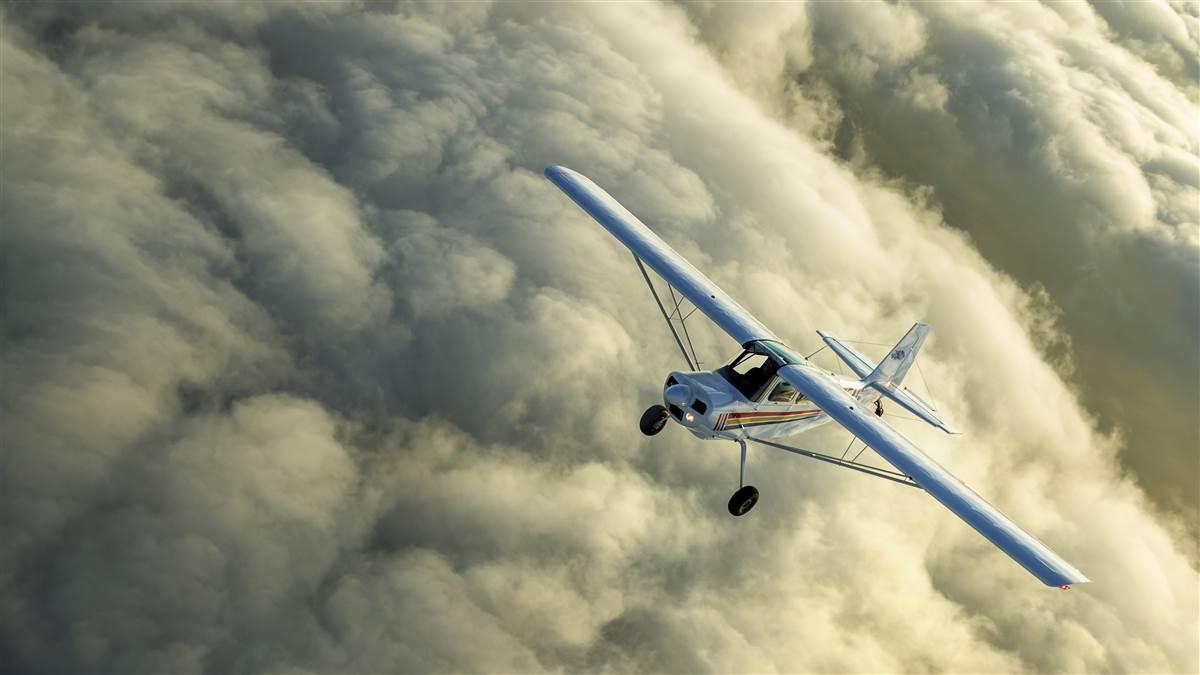 “Are we responsible for knowing this material for the upcoming test?” the student wanted to know.

The withering reply from the perturbed lecturer was that the students were “responsible” for learning everything they possibly could about the healing arts. That’s a full commitment to a lifelong practice, and whether some bit of information would or wouldn’t be on a test was too petty for the lecturer—or truly dedicated students—to even consider.

Similarly, student pilots can approach their own aviation education in at least two fundamentally different ways. Do they see themselves as responsible for learning only the material that’s required to pass a checkride? Or is flying a lifelong pursuit of aviation mastery centered on a relentless desire to improve?

If you’re among the former, you can stop reading now. This article will be of no interest to you. There’s nothing in it that will help you pass your next test or obtain your next rating. But if you regularly ask yourself what you can do to grow as a pilot, better understand the invisible and often counterintuitive forces at play in aviation, and expand your capabilities and knowledge base, keep reading.

When a glider pilot commits to land, she gets one chance to do it right because her unpowered craft offers no chance for a go-around. 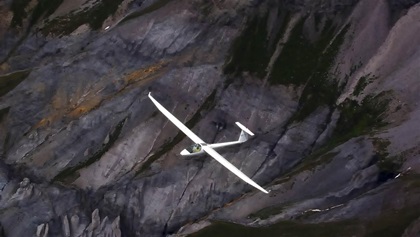 They also must decide on every flight whether they can safely glide to an airfield or “land out” by finding a suitable field.

And when a glider pilot commits to land, she gets one chance to do it right because her unpowered craft offers no chance for a go-around.

Glider flying typically begins with a formation flight behind a powered aircraft. That cooperative effort must be coordinated and precise, and the glider pilot must stay in position while avoiding the wake and wingtip vortices of the tow airplane—and that’s a fairly narrow sliver of sky.

Once released from the tow airplane, glider pilots seek out rising air. When they find it, they typically turn sharply to stay within those invisible cylinders of rising air. But turning a glider is a study in adverse yaw.

Those long, high-aspect-ratio wings with ailerons on the outboard panels mean the aircraft typically rolls slowly, and the downturned aileron so far from the fuselage creates massive amounts of adverse yaw while doing so. Flying efficiently to preserve altitude means keeping drag to a minimum, so it’s imperative for glider pilots to fly coordinated. Glider pilots counteract adverse yaw by leading their turns with rudder and rolling decisively. Once established in a turn, as in powered aircraft, the elevator determines the turn rate.

Rising air can be elusive. When glider pilots transit areas of falling air, they do so at relatively high speed to reduce the amount of time they’re exposed to it. When they encounter rising air, they slow their aircraft and turn to stay within its borders and gain altitude.

Gliders have many wing shapes and differing stall characteristics, but unlike powered aircraft, there’s no spiraling slipstream, P-factor, or engine torque to counteract. Instead, a quiet flight gets even quieter as airspeed decreases, there’s light airframe buffeting as airflow over the tops of the wings begins to separate, and the nose drops when the wing exceeds its critical angle of attack.

Airflow reattaches to the wings as soon as the pilot reduces the angle of attack, and the glider accelerates with an assist from gravity.

When returning to the airport for landing, glider pilots typically fly a pattern and configure their aircraft, but a glider approach doesn’t look or feel quite the same as a powered airplane. They generally fly a steeper approach and use lift-dumping spoilers to manage their rate of descent.

“Judging and adjusting your approach by the use of spoilers will be a different experience and may give you some new perspective on your use of the throttle,” said Wally Moran, an FAA designated pilot examiner, former airline chief pilot, and glider pilot. “Naturally the flare and landing will be lower than you are accustomed to, so again a different perspective.”

For powered airplane pilots, the benefits of thinking like a glider pilot are many. You can avoid turbulence by reading the sky, wind, and its interaction with terrain. You save fuel by flying at the most efficient speeds based on headwinds or tailwinds. And an engine-out landing is normal—a maneuver you perform at the conclusion of every flight.

In boxing terms, rudder application in a tailwheel airplane should be like a jab. Lightning fast, but without a Great deal of power. 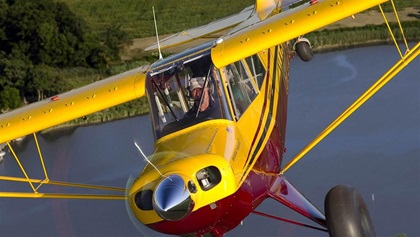 Tailwheel airplanes fly just like the nosewheel variety when they’re in the air—but ground handling is much more difficult when the little wheel is in back.

Becoming proficient in tailwheel airplanes requires pilots to vastly improve their use of rudder. And getting their feet in the game leads to pilots making better crosswind takeoffs and landings, gaining more directional control, and operating off narrow runways no matter what kind of airplanes they’re flying.

The first hurdle that most tailwheel pilots confront is the realization that they won’t be able to see directly over the nose in the takeoff or landing attitude. That seems obvious given the nose-high deck angle of most tailwheel airplanes. They sit on the ground at about a 10-degree nose-up attitude, and that means the engine and propeller block the view directly ahead no matter how tall the pilot happens to be.

Yet new tailwheel pilots genuinely seem surprised that they must S-turn on the ground to clear the path ahead while taxiing, and they’re extremely reluctant to raise the nose sufficiently when landing because of their innate, self-preservation instinct to maintain forward visibility. To be successful, however, tailwheel pilots must accept the fact that they won’t be able to see directly ahead during takeoff and landing and that they must rely on peripheral vision for directional control. Once that happens, pilots must get rid of their heavy, plodding “elephant feet.”

Even low-time pilots quickly develop good instincts for directional control. They know where the centerline is, and they know whether pushing the left or right rudder pedal will better align the airplane with it. The problem is that they tend to apply heavy, steady rudder pressure in the direction they want the nose to go—and they stick with it too long.

Tailwheel airplanes tend to react quickly, and a tap on the rudder pedal is all it takes to get it moving. In boxing terms, rudder application in a tailwheel airplane should be like a jab. Lightning fast, but without a great deal of power. In engineering terms, these rudder inputs should have “high frequency and low amplitude.”

You get the point.

Tailwheel pilots become accustomed to using full stick deflection for maximum performance—and it soon becomes ingrained. During a typical three-point, full-stall landing, for example, a tailwheel pilot must use full back stick (nose-up elevator). Doing so allows the airplane to touch down at the proper attitude, at the minimum speed, and avoid bouncing. Anything less than full back stick simply won’t do.

Beyond technique, however, successful tailwheel flying requires an odd combination of swagger and paranoia as well as a generally scrappy outlook.

The swagger comes from the supreme self-confidence a tailwheel pilot must have to fly an inherently demanding airplane to backcountry strips in strong winds and distant locations. Pilots don’t have to be boastful, but self-assuredness is essential.

So, too, is a healthy dose of paranoia. Tailwheel pilots have got to know deep down that, no matter how many times they’ve flown their airplanes successfully, they’re fully capable of losing directional control on their next takeoff or landing and putting their airplane on its nose or in a ditch. And even though a touchdown is smooth and well placed, a mental lapse on rollout can allow for a potentially damaging swerve. They’ve got to fly “all the way to the chocks” to avoid such embarrassing and costly errors.

The nagging notion that, even though everything appears to be going fine at the moment, it’s all an elaborate set-up to make you drop your guard is the default state of mind among veteran tailwheel pilots.

Spins are the schoolyard bully of aviation. 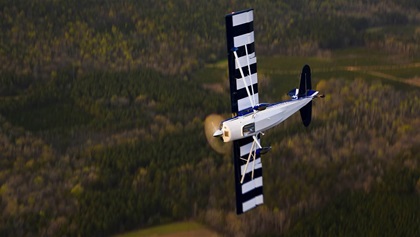 The confidence that comes from a proven ability to fly an airplane through its full 360-degree range of pitch and roll—as well as speeds ranging from zero to redline—is the reward that comes from aerobatic flying.

It’s exhilarating, strenuous, and allows pilots to more fully enjoy other types of flying because they know that they can precisely control their aircraft at every attitude and airspeed.

An aileron roll in a typical aerobatic trainer requires every last inch of stick travel. Entering a spin and allowing it to develop requires pressing a rudder pedal to the floor and keeping it there as well as every bit of aft stick. The result of all this aggressive handling is a strenuous, physical flight experience.

Private pilots accustomed to a maximum two Gs, or twice the normal force of gravity, pressing them into their seats during steep turns with 60 degrees of bank are introduced to aerobatic maneuvers such as loops, Immelmanns, and half-Cubans that typically subject them to about four Gs. And negative Gs that push the occupants away from their seats (such as during sustained inverted flight) are entirely new. Such novel sensations can be fatiguing, disorienting, and exhilarating, all at once.

Spins are the schoolyard bully of aviation. They’ve got an intimidating reputation, an air of mystery, and most pilots are taught only to avoid them. But when confronted with an experienced instructor, thorough preparation, and proper equipment (an airplane rated for aerobatics, parachutes, and a safe altitude) spins turn out not to be so tough after all. With practice, they become just another flight maneuver that can be broken down, dissected, and understood in detail.

Wally Moran, an FAA examiner and former airline chief pilot, said a pilot’s flying background is telling in the way the person thinks and how he or she performs.

“Glider pilots don’t need an automated weather report to know what the wind is,” he said. “They can tell by looking outside. When 10 knots of wind can be 25 percent of your ground speed, you tend to notice it.”

Tailwheel pilots are zealots for the centerline because tracking it precisely allows them to notice lateral drift and avoid swerves, and they bring that habit to everything else they fly.

“A pilot with tailwheel experience flying a tricycle gear airplane will always demonstrate better rudder control,” he said. “They perform better low-energy landings and on the centerline.”

All this hasn’t even delved into backcountry flying, high-altitude turbine aircraft, seaplanes, helicopters, ski flying, or the next generation of electric propulsion and eVTOLs.

There are so many aspects to flying and new areas to explore that no pilot can expect to master everything. By stretching, digging deep into the topics you find most compelling, learning—and possibly teaching—the flying stays fresh and new.

It’s not a test. It’s the continuation of a journey.