By the time you read this, 29-year-old Hayley Arceneaux will be back at work as a physician assistant at St. Jude Children’s Research Hospital but she will be more than a cancer survivor, cheerleader for others with life-threatening illnesses, and lover of red lipstick—she will be an astronaut. 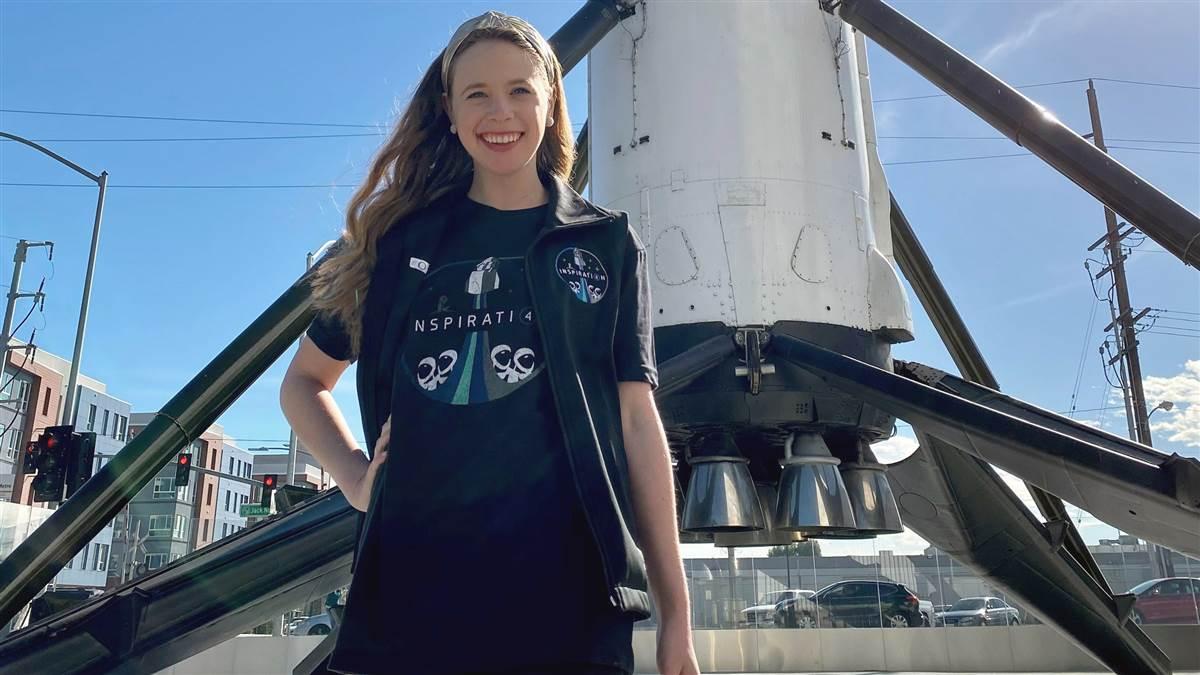 New episodes of Countdown: Inspiration4 Mission To Space premiered September 13 on Netflix. To learn more about St. Jude Children's Research Hospital, the Inspiration4 mission, and ways you can support and participate, visit stjude.org/inspiration4 and listen to the new podcast St. Jude Mission of a Lifetime. Follow Hayley’s journey into space on Instagram and Twitter.

Arceneaux is a member of the four-person all-civilian crew of SpaceX Inspiration4. The space mission launched September 15.

After surviving bone cancer at the age of 10, Arceneaux returned to the very place that helped save her life—St. Jude Children’s Research Hospital. This time, she works with patients who have leukemia and lymphoma. Her employer is also the reason she took on the space mission.

“I got an appointment request from St. Jude to talk about a ‘unique opportunity,’ and after they explained the mission to me, they asked me if I wanted to go. I was shocked and wasn’t even sure I’d heard them right, but immediately said, ‘yes.’ Then, I said I should probably talk to my mom first. I called her and said, ‘You’re not going to believe this, but it’s true. St. Jude just invited me to go to space.’ We agreed it was the opportunity of a lifetime and I couldn’t pass it up. Next, I called my brother and sister-in-law who are both aerospace engineers, and they assured me that space travel is safe. I immediately called St. Jude back and said, ‘Sign me up!’” said Arceneaux.

Each stage of Arceneaux’s life has taken perseverance, but Arceneaux says that “hope” has been the underlying theme. “The staff [at St. Jude] is relentlessly hopeful and helps you understand the real and important role hope plays in recovery. I’ve carried that with me and let hope be a guiding force in the 19 years since, and that’s why it’s so fitting that I’m filling the Hope seat on this mission,” she said.

The “Hope seat” is one of four seats on the ship that represents each astronaut’s purpose on Inspiration4’s mission to space—Leadership, Hope, Generosity, and Prosperity.

Arceneaux has chronicled her training and the mission through People magazine. “As soon as we announced the final two crew members at the end of March, we left together as a crew to complete our first training. I’m happy to report everyone graduated from centrifuge school, which is where we were exposed to G forces similar to what we will experience during launch. We will all be FAA-certified commercial astronauts, and I will receive some additional training since I will be the medical officer on the flight,” she said.

Senior Manager of Media Relations and Public Affairs
AOPA Senior Manager of Media Relations and Public Affairs, Jennifer Non joined AOPA in 2017. A former traffic reporter turned media relations specialist, and native Washingtonian, she enjoys traveling and is working toward her private pilot certificate. She was recently honored by Ragan Communications and PR Daily with a Top Women in Communications Award, in the Diversity, Equity & Inclusion Champion category and is also a member of the Board of Nominations for the National Aviation Hall of Fame.
Go to Jennifer Non's Profile