Get the app Get the app
News & Media A wreck rises

Editor's note: The printed version of this story incompletely described the development of the photoluminescent paint used. Defense Holdings Inc partnered with Sherwin-Williams to develop the paint, marketed as AfterGlow. AOPA regrets the error.
Dave Coleman was on a hunt for his “perfect” airplane. 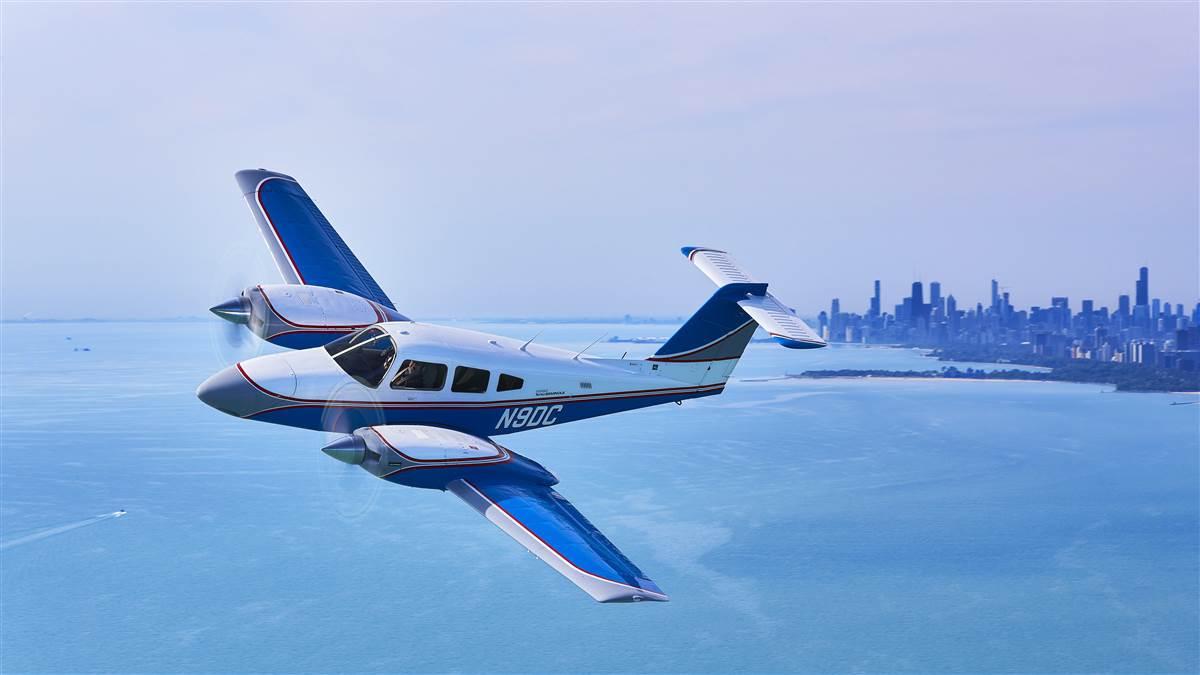 A sales and acquisition specialist with Duncan Aviation, Coleman regularly flew single-engine airplanes to visit Duncan’s Battle Creek, Michigan, location from his office in Chicago. That meant flying over Lake Michigan, often at night during the winter months. The more he flew the route, the riskier it seemed. Some things really got to him. “Coming back to Kenosha, I got tired of always being held at FIYER Intersection at 3,000 feet. In the dark,” he said. “That’s about 45 miles from shore....That’s a lot of water—and it’s 40 degrees!” He wanted a twin.

He looked at a nice used Beech Baron B55, with its speed and comfort. But the entire used twin market was loaded with what Coleman believed were overpriced, worn-out specimens that would only need to be upgraded. “The value of the asset relative to the maintenance required was out of kilter,” he said. As a once-owner of a Piper Seneca III, which he called a “maintenance hog” that cost $300,000 in repairs, he knew what he was talking about. So, a repeat of that experience wasn’t in the cards. Still, he knew that bringing any older piston twin up to modern, like-new standards would require a big outlay. “I don’t mind being a little bit upside-down,” he said, “but not a lot.”

At a glance: Turbo Seminole

Since their debut in 1979, Piper’s Seminoles have become the light-twin trainer of choice, with more than 1,000 sales. Many of these were fleet sales to training schools such as ATP Flight School and the University of North Dakota. Their handling, equipage, and safety have been their strong points, with recent models having Garmin G1000 panels. Their counter-rotating propellers and one knot’s difference between stall and VMC speeds make for docile demonstrations of engine-out behavior.

Turbo Seminoles, with a mere 87 sales, were less popular. The idea was to take the normally aspirated Seminole design and turn it into a more of a cruising airplane by adding turbochargers. But by the early 1980s the era of the light twin was winding down. The Turbo Seminole wasn’t as fast as competing used light twins such as Beech Barons, Piper Twin Comanches, and Aero Commanders. Gas prices were rising, too, as well as concerns over high product liability settlements.

Of the 87 airplanes sold, 22 were delivered to European customers. But only 38 remain on the FAA registry, which makes them rare birds indeed. —TAH

In a jocular vein, Coleman said what he really needed was a “free” airplane, which would let him shell out for improvements instead of overpaying to acquire a beater. Then, one day in 2018, he found his ideal airplane.

It was a wreck. No, really. Someone in Coventry, England, had landed a perfectly good 1982 Piper Turbo Seminole with such gusto that its nosewheel collapsed while braking during the turn off the active runway. The airplane was still moving when its nose struck the taxiway, so the nosecone was scraped, dented, and bent; the propellers struck the ground; and the engines ground to a halt. Instantly, the airplane was reduced to its salvage value. Coleman found it for sale online and quickly went into action. In May 2018 he made an offer of 8,000 £ (about $11,000) and the airplane was his.

The airplane was disassembled, packed into a shipping container, and delivered in June 2018 to Coleman’s hangar at Kenosha Regional Airport in Wisconsin. Coleman assembled a team to tackle the huge task of sorting out the parts, identifying what needed replaced or repaired, and reassembling the entire airframe. It was a daunting, two-year task that consumed much of Coleman’s time. “For two years, he didn’t make it home until 2 a.m.,” said his wife, Julie.

Julie helped with the work, and so did the Colemans’ two children, Ben (10) and Naomi (14). Many of the chores involved cleaning, repairing, painting, and assembling parts. “You wouldn’t believe it, but every time you go work on something, parts needed cleaned, over and over,” Coleman said. “And Julie and the kids were great.”

Others—adults—also pitched in. Robert VonBehrens chipped in with his avionics skills to create a new instrument panel and install an Aspen Evolution Pro Max suite—with altitude preselect. Other avionics included a setup of dual Electronics International CGR-30 multifunction instrument and system monitoring indicators; a Garmin GTN 750; a PS Engineering intercom; a Century 41 autopilot; BendixKing KX155 navcoms; and much more. Meredith Soto and A&P John Anderson helped, and some friends and neighbors assisted with getting the airplane out of the container and installing the wings. Anderson specialized in rebuilding the baffling.

Supervising the work was Joel Randall of Zion Aviation Services and Recovery in Zion, Illinois, and two of his employees. Randall, an A&P/IA, signed off on all the work, and he and Coleman meticulously documented every step along the way. In the end, the documentation filled six fat three-ring binders. It was a ground-up restoration for all practical purposes, but Randall said that all that documentation amounts to entries for disassembly and assembly.

Randall’s 18-year-old daughter, Rosalyn, also participated—in a big way. She learned how to buck rivets, helped create a new nosecone, and filled her logbook with time and tasks fulfilling most of the experience needed for her to earn her A&P certificate.

A big project like this is always full of crises, but one of the biggest emerged after Lycoming sent back the freshly overhauled engines. After they were installed, Coleman found that a critical part was missing: the throttle brackets. These attach to the throttle bodies and carry the linkages that connect the throttle control runs to the cockpit. “They were with the engines when I sent them to Lycoming, so I guess they got lost during the overhaul,” Coleman said. A desperate call to Piper headquarters connected him with a sympathetic vice president of technical support. Piper didn’t stock those parts anymore, he said, but he found blueprints for the brackets in Piper’s archives. It took a tense six weeks for the parts to be made by hand, but in the end Piper came through with the parts—and factory-new parts manufacturer approval (PMA) credentials. Two $50,000 overhauls had been rescued, and the Turbo Seminole project could resume.

Then came February 2, 2020—a red-letter day. The airplane was ready for its first flight as a reborn airplane. Coleman did a two-hour preflight inspection and runup, then took off, climbed to 11,000 feet over the Kenosha airport, checked all the airplane’s vital signs, and recorded only a few minor glitches.

Even so, the airplane was destined for more work. Leveraging his position at Duncan—one of the nation’s largest maintenance, repair, and overhaul organizations—Coleman had the Turbo Seminole’s ratty interior restyled, fitted with new seats, sidewalls, and headliner. Duncan also gave it a new paint job. These completions didn’t occur in one unbroken stretch of time. They occurred in fits and starts as gaps in the workflow permitted Coleman’s airplane to be sandwiched in between Duncan’s regular customers.

Fortunately, Duncan had been experimenting with a new paint from Sherwin-Williams Aerospace Coatings called SKYscapes Next Gen, which uses a new type of basecoat/topcoat combination. When some was left over from paint jobs Duncan had been doing on behemoths like Gulfstreams, Globals, or Falcons, Coleman was able to wangle enough to apply to his airplane—when there was enough time.

Leafing through a Sherwin-Williams catalog, Coleman came across an unusual-sounding paint under the “Defense Coatings” category. Seems the U.S. Navy had commissioned Defense Holdings, Inc. (DHI) to come up with a photoluminescent paint. DHI partnered with Sherwin-Williams to develop the paint, dubbed AfterGlow that could be applied to propeller tips. The Navy wanted it for use on aircraft carriers, where it would illuminate prop tips and give the visibility needed to prevent personnel from inadvertently walking into a moving prop. Although it was meant as a safety measure for loud, crowded carrier decks, Coleman thought the paint’s greenish glow was cool. So, he got a sample and had it applied to the Turbo Seminole’s new three-blade Hartzell props. Turns out, FedEx also uses AfterGlow on its Cessna Caravan propellers.

It’s a real attention-getter, that’s for sure—especially at night, when the tips glow in perfect, entrancing circles. Enticing, too, for all the gawkers and comments they elicit. Of course, sunlight is what activates the paint, which begins to illuminate immediately but can’t be seen very well in daylight. The best light show is at night, after you shine an ultraviolet-emitting flashlight on the tips. At the time he discovered it, Coleman thought the paint was only used by the military and medevac helicopters. But guess what—he says there are now rumors that luminescent prop paint may soon be offered as an option on new Cirrus airplanes. However, Cirrus wouldn’t comment.

Coleman and I flew his finished bird in June, and it brought back memories. I flew a factory-fresh Turbo Seminole in 1981 around the Caribbean. Coleman flies his Battle Creek missions at 11,000 to 12,000 feet, usually setting power at 32 inches of manifold pressure and 2,400 rpm. He duplicated this on our flights and at 11,500 feet and minus-2 degrees Celsius we came up with 185 KTAS on 12.7 gph per side. The Turbo Seminole’s 180-horsepower Lycoming TO-360 is unique in that it mates its turbochargers to carburetors, not a fuel injection system, so the cylinders can’t be individually tuned for uniform CHTs or EGTs. This means Coleman watches temperatures and adjusts power—and/or cowl flaps—to keep them under control. It also means no leaning to lean-of-peak EGT. His personal maximums for CHTs are 400 degrees (redline is 450 degrees), owing to the low-time engines post-overhaul.

“It takes me 0.7 hours to get from Kenosha to Battle Creek [136 statute miles on a direct route],” he said. “That’s the same time it would take in a Cirrus or the Tradewinds Turbine Bonanza conversion that I used to use.” Cruising down low, he said he once saw 200 KTAS with all the levers forward.

Randall kept on top of the hours spent on transforming this rare Turbo Seminole from wreck to better-than-new. It came to almost 4,000 hours of work in just under three years. The job is done. The Phoenix has risen from the ashes.

And what about Coleman’s goal of ending up “a little bit upside-down”? He sighed, suggested we not tell his wife, then said he put about $309,000 into the entire project. “I thought I could do it for less than $200,000, but….” Then he trailed off, saying he plans to keep the airplane for a long, long time.

Would he ever sell it? “Never say never.”

The day photographer Mike Fizer and I visited, Randall was at the hangar. So was his daughter. So were Coleman’s wife and kids. Passers-by gawked and talked. Randall was adjusting something on the door latch, and there was some discussion about the prop-anti-ice gauges (many European Turbo Comanches were ordered with electric propeller anti-ice). The boots worked, but for some reason current output wasn’t registering on the ammeters. In other words, the tweaking continues.

The sun set, we followed the airplane to a ramp, lit up the props one last time, watched them carve orbs against the taxiway lights, got in the car, and left. I’m guessing we’ll be seeing more of them in the near future.