It was bittersweet for many who stopped by the California Aeronautical University (CAU) Tribute Baron 55 featured at the Wings Over Camarillo Airshow in August. The tribute aircraft is a Beechcraft Baron B55 with a patriotic paint job specifically designed to reflect the colors of and pay respect to the U.S. flag. The Baron's special design contains the names of all military personnel—more than 7,500 names—who have given their lives in defense of our country since the 9/11 terrorist attacks. 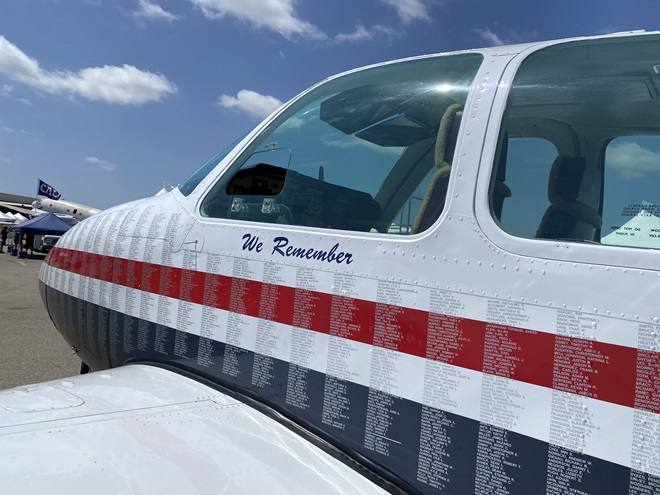 The names are arranged on the Baron by chronological order of the fallen hero’s death using their last name, first name, and middle initial; blank spaces have been reserved on the aircraft for periodic updates. “I was hesitant to look but was so glad I did” said one attendee, “I found the names of two of my friends I served with and was able to send a picture of their names to their parents.”

Guests of Wings Over Camarillo observed the memorial aircraft on display, which included a catalog and accompanying map of where each veteran’s name is located on the aircraft. “You never quite know what affect it will have on someone as they look for the name of their friend or family member,” said Tamu Smith-Kohls, the vice president of enrollment and marketing for CAU. “I am a veteran myself and seeing the names so carefully and respectfully detailed on the aircraft bring up so many heartfelt emotions”. The CAU Tribute Baron 55 will take flight as often as possible to give those all over the United States an opportunity to honor their veteran loved one in a special way. CAU is working diligently to have current names of those who gave their lives displayed on the aircraft. 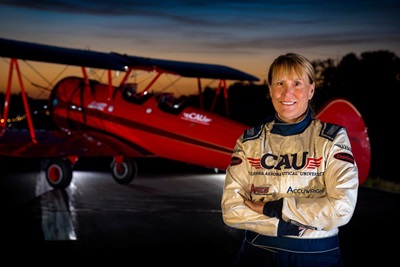 Along with Tribute Baron, attendees had an opportunity to see Vicky Benzing wow the crowd during her aerobatic act with her Stearman. Benzing is the “Fastest Woman Racer” ever in the history of the Reno Air Races when she qualified in a one-of-a-kind L–139 jet on the race course at 469.831 mph. She can be seen flying her beautiful Boeing Stearman in the documentary film Mercury 13, which is currently airing on Netflix. Her other film and television projects include an episode of Ice Pilots, an episode of NCIS LA, and extensive stunt work in her Stearman for the short film Niner Echo Foxtrot. Benzing will be flying in a few more airshows through the end of the year, so look for her schedule and appearances.

“We were thrilled to participate in Wings Over Camarillo again this year,” said Matthew Johnston, president of CAU. “Whether you experience flight in our Mobile Flight Experience simulator bus, or watch Vicky Benzing soar majestically through the air in her Stearman, or reflect on those who have made the ultimate sacrifice for our nation, we had something for everyone this year.”

With the looming pilot shortage that has been exacerbated by the global coronavirus pandemic, CAU is working to prepare the next generation of aviation professionals. Through the university’s outreach events and partnership with Benzing, CAU’s goal is to open the eyes of young people to the possibility of starting careers as professional pilots, aircraft mechanics, and other aviation professions.