Get the app Get the app
Already a member? Please login below for an enhanced experience. Not a member? Join today
News & Media Flying Life

DPEs are not all-knowing wizards after all

In the 1939 movie classic, The Wizard of Oz, Dorothy and her misfit group of travelers seek the help of a great and powerful wizard.
Natalie Bingham Hoover is an FAA designated pilot examiner and chief instructor at a flight school in the Memphis, Tennessee, area.

Dorothy needs help finding her way back to her Kansas home, the lion needs to find courage, and so on. We all know the story. But the part that you might not remember is that it was Dorothy’s dog, Toto, who pulled back a curtain to reveal that the great and powerful Oz was really just a little man pushing buttons on a machine with smoke effects, a light show, and a deep voice maker. Eventually, Dorothy and her friends realize they had the answers within themselves all along.

As an FAA designated pilot examiner, people often treat me like that all-knowing wizard, calling for answers to their questions about regulations or proper procedures, or a confusing symbol on a chart. While this is flattering, I cringe a little when they ask because I often don’t know the answer. Seriously, friends, I’m a slow learner, and I’m running a small circus at my house with three young children, so most days I have a frazzled memory. However, I’d venture to say there aren’t any walking FAR/AIMs out there who would possess all the answers to the myriad aviation questions. Here’s what the so-called experts are really good at: using their resources. If they don’t know an answer to a question, they will research it until they do, and you can do the same.

Let me pull back that curtain for you:

Regulation questions: This is the type of question I get asked most often. For example, “I’m working on my commercial certificate. Do I need the 10 hours of instrument training required by 61.129(c)(3)(i) if I already hold an instrument rating?” If you read the regulatory text, the answer is a solid…maybe, depending on the way the training has been logged. Namely, the examiner needs to see in the logbook-specific things such as partial panel and unusual flight attitudes. But the reason I am so confident in this answer is because of a little-known resource, called FAA legal interpretations, which are readily available to any internet user. If you wanted to find the answer to the question, simply search for “FAA legal interp 61.129(c)(3)” and you will see a letter written by FAA legal counsel covering this topic. Those analytical minds among you may ask, “But, is the interpretation binding?” If the legal interpretation is an FAA lawyer stating their interpretation of the regulations, then I sure don’t want to be doing something that contradicts them—do you?

Checkride ground questions: I’m going to go out on a limb here and say it’s probably best not to ask the examiner what sorts of questions they will be covering on the oral portion. The airman certification standards list everything that is fair game on the checkride, so once you’ve fully prepared with your instructor, use the ACS as your ultimate resource to double-check that there will be no surprises on checkride day.

Maneuver procedure questions: At the flight school, my instructors often ask, “How would you like to see that emergency descent performed?” Truthfully, it doesn’t really matter how I like the maneuver. I’d actually rather my ears not pop from the steep descent rate, but I don’t get to choose. The FAA does, and the ACS calls for a 30-degree bank, positive load factors, and manufacturer’s recommended speed. If you ever want more information or pictures on how to perform some of these maneuvers, the Airplane Flying Handbook is also a great official resource that’s a free document download for ForeFlight subscribers and on faa.gov.

Discrepancy among instructors: “My instructor taught me to do the short-field takeoff with 10 degrees of flaps, but another CFI told me I shouldn’t use any. Which way is right?” This is a question I wrestled with when I worked at an airline as a first officer on the Bombardier CRJ-200. Every trip, I’d fly with a new captain who would have his own way of doing things. I found it stressful to constantly play the learn the new captain game until I realized that wasn’t my job. My job was to do things the right way, and that meant following the manufacturer’s guidelines and company-approved checklists. As long as you do what the book says, you can never be wrong. So, I always answer the flap question with a question of my own: “What does the POH say?” The reason for the discrepancy here is that different models of airplanes call for different flap settings. There is no one-size-fits-all answer.

The next time you have a question and you think you need to seek out an expert, keep in mind that, just like Dorothy and the Cowardly Lion, you probably already have all the resources you need to find the answer. 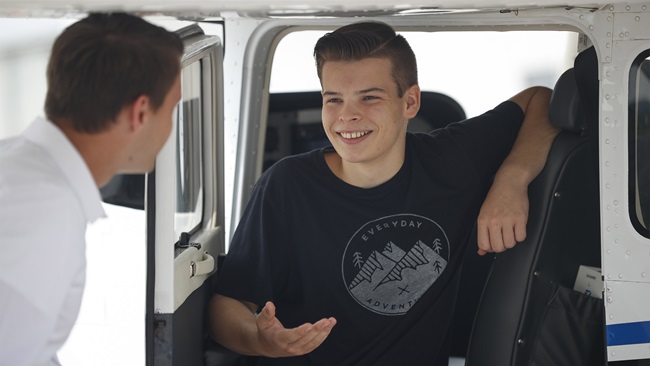 Training Tip: 'Asking for a friend'