Get the app Get the app
Already a member? Please login below for an enhanced experience. Not a member? Join today
News & Media Make sure your straps are tight

'Make sure your straps are tight'

As a self-proclaimed taildragger enthusiast, I naturally gravitate towards burly, backcountry beasts, old warbirds, and vintage/modern Cubs. Although aerobatic airplanes typically fall into the tailwheel category, I have never been drawn to them. After all, the mere thought of pulling Gs makes me slightly nauseous. 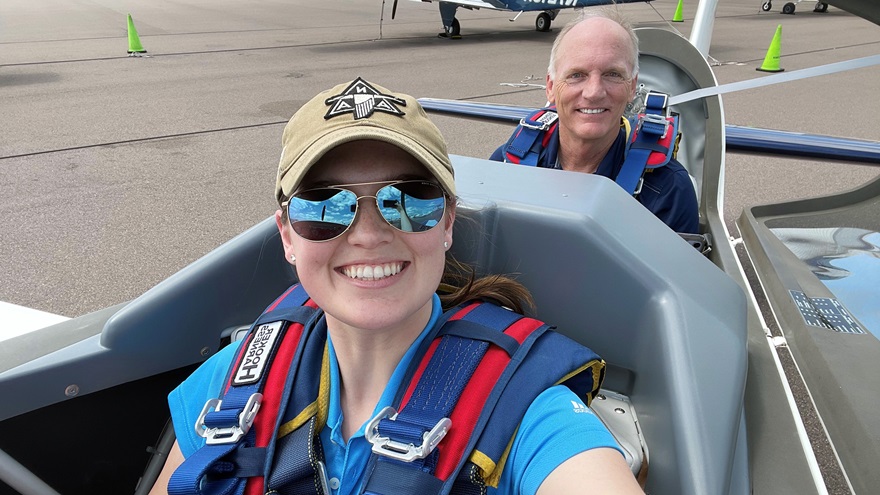 Cayla McLeod and Richard McSpadden strapped into the Extra 300L recently donated to AOPA to support pilot education. Soon after this photo was taken, the pair departed Lakeland, Florida, just prior to the start of the Sun 'n Fun Aerospace Expo. Photo by Cayla McLeod.

McSpadden, a former commander and flight leader of the U.S. Air Force Thunderbirds, a Super Cub owner, and a family friend explained that I would be one of the test subjects for a new aerobatic and upset recovery training series that the ASI is developing. The forthcoming series will introduce pilots who have little to no aerobatic experience to unusual attitudes and various aerobatic maneuvers. The Extra 300L was recently donated to AOPA by Bruce Williams, a flight instructor, Microsoft Flight Simulator program manager and aerobatic pilot who made the generous gift to promote aviation safety education. The Extra, which he had owned for nearly two decades was an airplane that Williams also used for upset recovery training and spin instruction through his own organization, BruceAir.

After a few back-and-forth emails with McSpadden and the ASI team, we developed a tentative Extra flight game plan: get to Sun 'n Fun and then go from there. With weather forecasts looking dicey and plenty for everyone to do before the show, McSpadden and I agreed to play it by ear.

After an easy (but hot) two-hour flight from Peach State Aerodrome in Georgia to Lakeland Linder International Airport in Florida with Erick Webb (my fellow AOPA social media marketer) in the AOPA Sweepstakes Grumman Tiger, McSpadden met us at the airplane with a smile. Although slightly distracted by the Tiger in its new livery, it didn’t take long for McSpadden to point out his Sun 'n Fun chariot tied down across the ramp—the Extra 300L.

Suddenly, the thought of training in the Extra became a reality. I knew at some point in the very near future I would don a parachute and strap myself into the high-performance machine. Slightly nauseous at the thought, I looked away and marveled at the metallic Tiger sparkling in the sun.

After a day and a half of waiting on the weather to clear, the time had come. McSpadden and I met at the Sheltair FBO where we briefed the flight and went through an extensive checklist of maneuvers that I would complete. Let’s just say that I was relieved to have passed on the bacon, eggs, and pancakes at breakfast.

After setting up the GoPros, McSpadden handed me my parachute and said, “Make sure your straps are tight. You’ll find yourself trying to cinch them even tighter when we start the maneuvers.” Although I would have expected a comment like that to make my nerves jump sky-high, it had the opposite effect. I couldn’t wait to climb in.

One might assume that strapping into an Extra is like hopping into any other airplane, but that couldn’t be further from the truth. Thanks to the parachute and a ratchet-type seatbelt system, securing my 5-foot-4 frame into the front cockpit turned into a time-consuming and uncomfortable process. I quickly realized how essential it was to provide ample time for this task.

After a final walk-around and GoPro check, McSpadden climbed into the aft cockpit, closed the canopy, and exclaimed “clear prop!” Before I knew it, McSpadden said “your controls” and I was S-turning the agile machine all the way to the hold-short line. The airplane did just exactly what I told it to do—nothing more and nothing less. I was already impressed.

“Follow through on the controls with me,” said McSpadden. “Once the tail comes up we will give it a second and we’ll be ready.”

As I shadowed the controls, I couldn’t help but notice how quickly everything happened. As the power came up, so did the tail and before I realized it, we were already departing the pattern. This was definitely not one of the taildraggers I was used to.

“Pick a nice opening around the clouds and work your way up to 5,000 feet,” said McSpadden. Shocked at the fact that he had already turned the controls over to me, I picked an opening and turned towards it. It didn’t take long for me to realize how snappy, yet refined this airplane really was.

Once we reached 5,000 feet McSpadden and I completed 90-degree turns, steep turns, and “as steep as I was comfortable" turns. Although it took a few turns to get caught up with the airplane, I found myself catching on much quicker than I would have thought.

Next up on the checklist was one of my favorite maneuvers—Dutch rolls. “Keep the nose on the very top of the cloud at your 12 o’clock position,” instructed McSpadden. A maneuver I was expecting to be quite easy turned into quite a feat. But after watching McSpadden demonstrate the maneuver, my feet started waking up in the way they should have at the very beginning.

The next to-do on McSpadden’s list was an incredibly important one. “Anytime you point the nose down in this airplane, the power needs to come back. The airplane is just that fast.” As McSpadden pointed the nose down, he left the power in and demonstrated how quickly the airplane builds speed. Before I knew it we had reached 125 knots and were still accelerating before McSpadden pulled the nose up above the horizon. “Nose down, power back” was one of the biggest mantras of our flight.

Next on the maneuver list was power-on and power-off stalls. McSpadden demonstrated both types of stalls, and then passed the controls over to me. There was a very defined buffet—very similar to that of a Cessna 172 with no harsh characteristics. The tameness thoroughly surprised me.

Left feeling quite confident from power-on and power-off stalls, we went straight into accelerated stalls. As McSpadden pulled through a tight and steep turn, the airplane slowed, and as it stalled the wing shook and rumbled intensely. It was aggressive and abrupt. Admittedly I was caught off-guard and left wondering “what just happened?” I asked McSpadden to demonstrate another before I took the controls. Flying through it proved to be much easier than riding through it, but eye-opening, nonetheless.

The final item on McSpadden’s checklist was unusual altitudes. I had high hopes for this part of the training, but as McSpadden started demoing the maneuvers, I started feeling queasy. I managed to ride through one more demonstration before taking the controls and maneuvering the airplane for myself, but after one attempt of my own, I told McSpadden that I was feeling nauseous.

“Alright let’s call it. We got a lot done, much more than I would have thought for a first flight,” said McSpadden. “30 minutes is a lot in an Extra.”

Although I wish that we could have continued, I knew better than to test my limits. I wanted to walk away from the Extra with positive thoughts instead of stumbling away with a Sic-Sac in hand.

My first introduction to the Extra was filled with plenty of grins, laughs, and “oh wows.” I didn’t know what to expect, but I stepped away from the flight feeling like a more educated pilot. I look forward to my next lesson in this airplane—one that I am both nervous and excited for—an introduction to aerobatics. 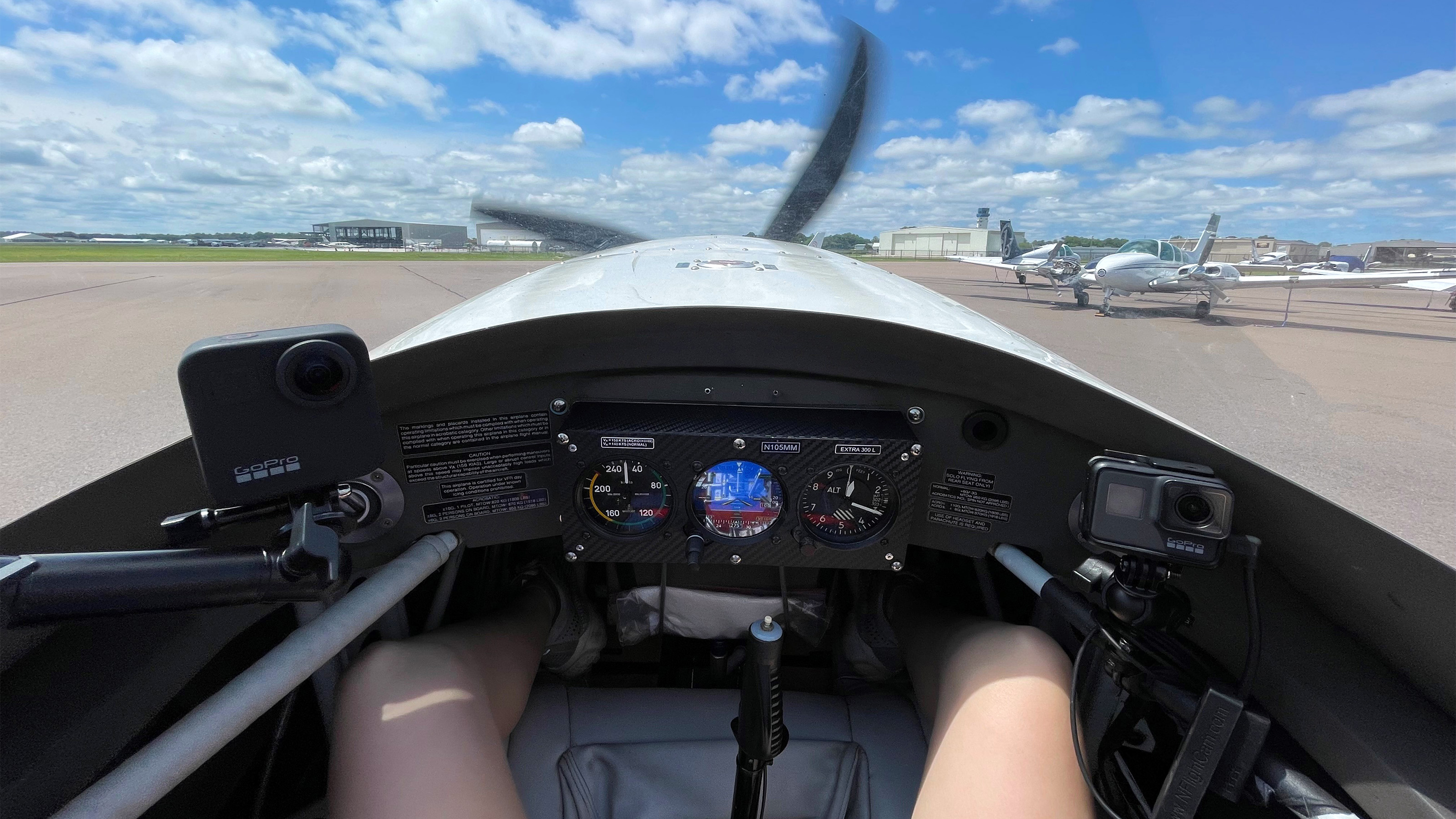 Cayla McLeod strapped into the Extra 300L for a 30-minute flight with Richard McSpadden. Photo by Cayla McLeod.