How an aerial photographer based in France is changing the game

Since the first aerial photograph, taken from a hot air balloon in 1858, aerial photography has evolved into a thriving industry of professionals and hobbyists utilizing the newest camera equipment, drone tech, and for many, the same helicopters or fixed-wing aircraft they started using when they opened their business.

“Innovation is really in our DNA,” said Jean-Luc Kaiser, owner of L’Europe vue du ciel. “Every two years, for example, we change our photo equipment to always have the best camera.”

Kaiser started the company in 1999 in eastern France. The office features an aerial photography museum loaded with Kaiser’s personal collection of historic photographs, articles, and antique aerial camera equipment. Its located just a few miles from a “historic battlefield of the First World War ” where Kaiser, a history buff, says, “a big part of the history of aerial photography was written.”

In the beginning, the business mainly provided oblique or angled aerial imagery from its Schweizer 300 helicopter, fulfilling photo requests from large companies, government entities, and private individuals. Thirteen years later a five-person team of pilots, photographers, IT engineers, and GIS specialists has shifted its focus from oblique work to vertical imagery. The company provides photographic maps of cities, 3D models, and other geographic information products such as an inventory of leisure activities along hundreds of miles of beaches. The straight-down, vertical perspective is used to image large areas, such as harbors, where the photographic maps can be used to make measurements. 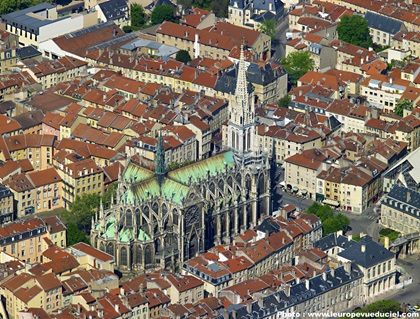 The changing needs in aerial photography deliverables also came with the call for innovation in aviation. High fuel costs across Europe, coupled with a desire to cut their carbon footprint, led Kaiser and his team to look for a better option. “We had in mind to reinvent the main work tool we have.”

That alternative came in the form of Slovenian aircraft manufacturers Pipistrel’s Alpha Trainer, a light aircraft powered by a rotax 912 UL that runs on automotive gasoline.

“In France it’s permitted to use light aircraft for doing our work commercially,” Kaiser said. The company ordered the Pipistrel Alpha Trainer from the factory but “with lots of special modifications to make it the best camera plane we could” and affectionally named their new photo ship, the Green Observer.

On why the Green Observer is perfect for aerials, Kaiser had a lot to say: “You can fly relatively quick at 120 miles per hour, but you can fly at 40 miles per hour if you have some oblique pictures to do … it’s a high-wing plane and you can open the door in flight.”

Aerial photo missions begin with a client interview to establish a mutual understanding of the project. Once all aspects have been considered, the team moves on to technical planning for photo collection and flight planning. In France, there are nearly 400 areas restricted to aerial photography. All photo missions are done with two people, one to fly and look for traffic, and the other running the camera and/or mapping equipment.

Other modifications include several camera ports in the floor and a dedicated flight management system.

On the cost savings, Kaiser explained, “You must keep in mind that in France, a gallon of aircraft fuel is around $9.50. So, when you fly mapping with this plane at four gallons per hour and your competitors are flying a twin engine who burns 20 gallons per hour, it makes a big difference.”

Kaiser and his team recently calculated the carbon emissions with the Pipistrel and found that per mile flown, the 80-horspower Rotax engine produces the same or less emissions than a small car. “The less fuel you burn the less pollution you make.”

“Clients love that it’s low polluting and quiet for people on the ground,” Kaiser said. “When we get aerial photo requests, clients want the Green Observer and nothing else.”

Using light, experimental aircraft for aerial photography is not currently permitted in the United States, but it is being considered through FAA’s MOSAIC initiative, the Modernization of Special Airworthiness Certification which includes many anticipated reforms to regulations governing light sport and amateur-built aircraft.