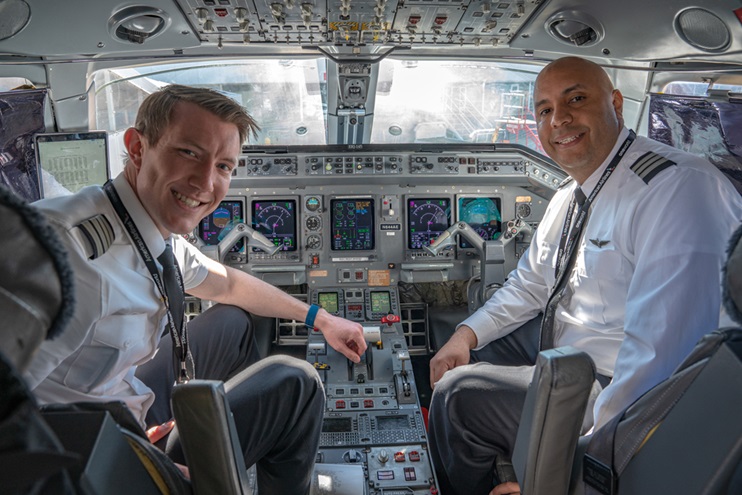 Pilots in the cockpit of an Embraer ERJ-145. Photo courtesy of Piedmont Airlines.

ExpressJet recently filed for Chapter 11 bankruptcy and has since ceased all flight operations and furloughed approximately 1,300 pilots.

In the wake of ExpressJet’s announcement, Piedmont announced on August 25 its plan to offer jobs to seniority list pilots recently furloughed from ExpressJet. Piedmont will invoke the “distressed carrier provision” in its Air Line Pilots Association-negotiated contract, a provision that was added in 2021, and, according to Piedmont’s website, “allows the company to offer pilots at carriers deemed ‘distressed’ a safe haven for employment, including longevity-based pay and bonuses.” Other incentives include contractual flow to American Airlines, expedited job offers, travel to Piedmont’s training center to complete or resolved outstanding paperwork or background issues, and more.

Piedmont Airlines, based in Maryland, operates a fleet of Embraer 145 regional jets under the American Eagle brand.

Matt Kernan, Piedmont Airlines director of operations, said, “Piedmont added distressed carrier language to its pilot contract last year before anticipating the fragility of some regional carriers after the pandemic. No one wants to see an airline fail, ever. We know that ExpressJet pilots are well-trained aviators who know the Embraer 145, and we are very pleased to make this transition as easy as possible for them.”

“This is an opportunity to get these pilots significant pay and bonus increases, expedited job offers and in the process, help Piedmont grow its fleet,” continued Kernan. “A pilot with five years’ experience can start at over $160 an hour.”

Trouble started for ExpressJet in 2018, when Delta Air Lines and ExpressJet announced plans to end their Delta Connection contract. In 2020, travel disruptions due to the COVID-19 pandemic caused United Airlines to end its United Express contract with ExpressJet. The company shut down for about a year. In October 2021, ExpressJet rebranded and began flying as Aha! Almost a year later the company reported a $17 million loss and filed for bankruptcy on August 23. The airline plans to liquidate its assets and auction them off to repay its creditors.

“A combination of conditions led us to this decision,” ExpressJet Chairman and CEO Subodh Karnik said in a statement. “Despite the valiant efforts of our employees to overcome challenges, and despite great support by our cities and airports—especially Reno-Tahoe and the community there, we arrived at a point where termination of operations was in the best interest of our stakeholders.”

The company said growth, which was an integral part of its business plan, was impeded by a “lack of availability of aircraft and the inability to swiftly establish passenger servicing infrastructure in smaller airports.” The company also cited lower revenues due to the “impact of COVID-19 variants and the inability to implement hotel bundle offers—foundational to aha!’s ‘air hotel adventure’ plans.” Fuel prices and other costs were also listed as contributing factors.

Pilots can learn more about Piedmont’s distressed pilot provisions on the airline’s website.