Thoughts on flying the California Twofer 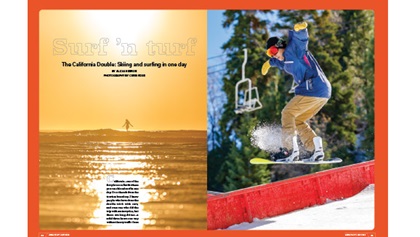 What a wonderful write-up about the California Double (“Surf ’n Turf,” July 2022 AOPA Pilot), and highlighting all that can be shared by California and GA. Having grown up in the Orange County area and flying out of John Wayne Airport (SNA), I would like to share my California Triple: Wake up early for dawn patrol surf session at Huntington Beach. A quick sunrise session, for an hour or so, then off to the car and Long Beach airport for the quick flight to Big Bear and a few later morning ski runs. Then—and here is the kicker—fly down the valley to Bermuda Dunes (UDD) or Palm Springs (PSP) to play the back nine at any one of the several golf resorts in the Palm Springs area. Surf, ski, golf—all in a day. The California Triple.

I enjoyed Ian J. Twombly’s look back at the Windecker Eagle in “Aviation History: Who Designed the First Composite Aircraft?” (June 2022 AOPA Pilot). He stated that the Windecker Eagle was the first certificated composite aircraft. That’s not quite correct. It was the first composite airplane to receive certification, in December 1969 by the FAA. If the article had replaced the word “aircraft” with “airplane,” it would have been correct.

I enjoyed the debate “The Merits/Demerits of Recreational Airplane Water Skiing” (June 2022 AOPA Pilot). I have participated in the sport of aviation water skiing and can assure you that it is not only safe but a heck of a lot of fun. But, like every new endeavor, it is wise to do your homework before taking action. I note that Dave Hirschman, who thinks airplane water skiing is a bad idea, offered up the secret to success: a ground speed more than nine times the square root of the tire pressure! And, while Hirschman has divulged the secret, it is Koontz who has admonished those who would try water skiing to plan properly and fly within the legal limits imposed by the FAA. In the end, the decision to water ski or not in your airplane is up to you. As my current ride is the Commemorative Air Force’s B–25 bomber Maid in the Shade I think it would be prudent to restrict my operations to hard asphalt. But, if I can borrow your J–3 Cub….

We welcome your comments! Send letters to Editor, AOPA Pilot, 421 Aviation Way, Frederick, Maryland 21701 or [email protected] Letters may be edited for length and style. 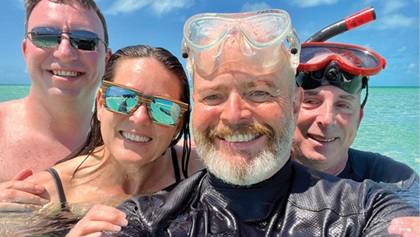 “Photo flights in the Bahamas require close crew coordination,” said AOPA Director of Photography Chris Rose. “So does swimming there.” (Left to right: Travis Klumb, Ivy McIver, Rose, and Dave Hirschman.) See how the Bahamas are recovering from Hurricane Dorian in “People Make the Place” .