Poisoning of pilots tied to 31 accidents over 39 years

Exhaust system failures in piston aircraft can put dangerous amounts of carbon monoxide (CO) into the cabin quickly, and the NTSB is concerned that the detectors most commonly used in general aviation have “limited” effect.

The NTSB issued Aviation Investigation Report AIR-22-01 in December, reiterating the board’s previous call for the FAA to require installation of CO detectors in GA aircraft. The NTSB identified 31 accidents between 1982 and 2020 attributed to CO poisoning, including 23 fatal accidents that killed 42 people and seriously injured four.

“Despite the widely recognized dangers of CO poisoning during flight, the FAA does not require CO detectors on enclosed-cabin general aviation aircraft with reciprocating engines,” the NTSB wrote in the report, noting that a nearly identical recommendation was made in 2004 seeking mandatory installation of detectors that “quickly and distinctly alert pilots to the presence of CO.” 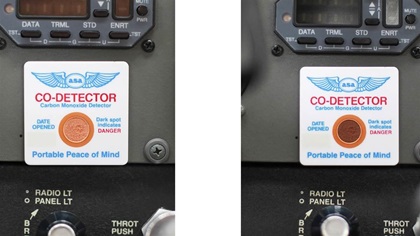 Exhaust system leaks are the most common cause of CO poisoning in GA aircraft, and the spot detectors (printed cards treated with a chemical that changes color in the presence of high CO concentrations) long used to monitor for dangerous cabin conditions do not produce aural alerts, and the visual cue is easy to overlook. Accumulation of CO in the bloodstream leads to symptoms also associated with hypoxia, including cognitive impairment that escalates quickly to loss of consciousness in the presence of high concentrations of the poisonous gas.

A variety of compact, battery-powered CO detectors that command attention with alarms and blinking lights are available for use in GA aircraft in a range of prices starting at less than $100 for the Geiger CO Carbon Monoxide Monitor carried by vendors including Aircraft Spruce. The keychain-sized TOCSIN 3 Cockpit Monitor was listed for $169.95 by Sporty's Pilot Shop, along with the $99 Forensics Carbon Monoxide Detector. Pilot Mall offers the AV8 Inspector portable CO monitor for $139.

More sophisticated solutions offered at prices starting at a few hundred dollars include panel-mounted devices and otherwise-installed options, such as the Aithre Shield eDot that includes an aircraft-mounted CO sensor that links to a panel light, as well as a smartphone or watch. Aircraft Spruce offers the device for $450.

The NTSB issued separate CO-related safety alerts for aircraft mechanics and pilots, and made it the subject of a September 2020 blog post.