The brains that launched GPS

It takes a lot of math to find yourself

The next time you program your GPS to fly direct-to (whichever direction you may fly), spare a thought of thanks for Gladys West and her remarkable mathematical mind. 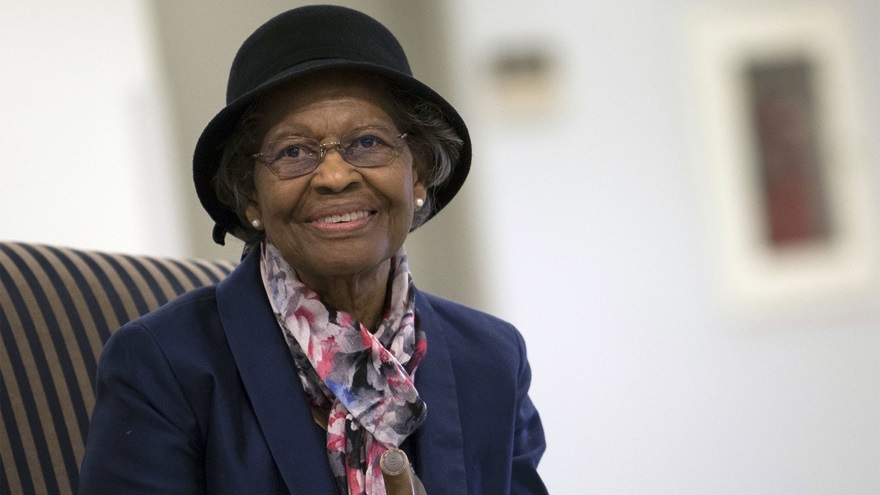 Gladys West worked for the U.S. military as a computer programmer and managed systems analyzing satellite data that would form the basis of modern GPS systems. Photo by Adrian Cadiz.

West was born at a time when pilots navigated by following railroad tracks from town to town, often landing in a field to ask the farmer for directions. The advent of VOR stations improved matters, but tuning in two of those, centering the needles, and drawing lines on a chart while also flying the airplane never got easy. West, and her colleagues and collaborators, fixed all of that. Navigation is a breeze these days, thanks to inexpensive GPS receivers in our cellphones, electronic tablets, and aircraft. We only need to look for the little airplane icon to see our location and the nearest airport.

We have a lot of people to thank for this enhanced flight safety and convenience, from the engineers and rocket scientists who built the GPS satellites and the rockets to launch them, to the mathematicians who figured out how the system would work. West was a key enabler of the technology, thanks to her mathematical and computer programming expertise.

From farm to college

Gladys West (née Gladys Brown) was born on the family farm south of Richmond, Virginia, in 1930, the same year as Neil Armstrong. When not in school, she worked on the farm, like most children of the Depression. Many of her classmates would go no further, living out their lives as farmers or working at the local tobacco factory. For West, school offered her a path to a better career.

“I was going get an education and I was going to get out of there. I wasn’t going to be stuck there all my life,” said West. She hit the books, becoming valedictorian of her high school graduating class and earning a scholarship to Virginia State College, a historically Black college that is now Virginia State University.

Once there, she learned that while she had been at the top of her rural high school class, she now had to work hard to keep up with students from city schools. After graduating with a bachelor’s degree in mathematics in 1952, she taught math while earning a master’s degree in 1955.

In 1956, West was hired as a mathematician by the U.S. Naval Weapons Laboratory in Dahlgren, Virginia, about 40 miles south of Washington, D.C. There, her calculations supported the development of new weapons, such as ballistic missiles. At first, the mathematicians solved complex equations by hand, but they soon transitioned to programming computers to solve long and complex problems. West became a computer programmer and managed systems that analyzed satellite data. In the 1960s, she worked on an astronomical study that determined the movements of Pluto in relation to Neptune.

Looking down on Earth

By 1978, West was project manager of Seasat, a satellite designed to measure ocean wave height, water temperature, currents, winds, and icebergs. It was the first project to demonstrate that satellites could collect oceanographic data.

Next came GEOSAT, a satellite that gathered data to create computer models of the Earth’s shape. To increase the accuracy of the computer models, West employed complex algorithms to account for various forces that distort the Earth— such as its gravity, rotation, and tides, plus the fact that the Earth is not perfectly spherical—especially the ever-changing ocean surfaces. West and her team created a program to precisely calculate satellite orbits, which allowed accurate position calculations. These computer models became the basis for GPS.

While at Dahlgren, she met fellow mathematician and her future husband, Ira West. They married in 1957 and had three children.

Today, GPS is a network of 24 orbiting satellites (24 is the minimum; extras are orbiting as backups) that can pinpoint a GPS receiver’s location to an accuracy of about 15 feet, using the average smartphone. To do this, each satellite must know its position in space and the precise time, determined by an on-board atomic clock. The satellites transmit their position and time to GPS receivers on Earth, which calculate the distance to the satellite by measuring the time the signal took to arrive. With signals from four satellites, a GPS receiver can triangulate its position.

Like the NASA mathematicians depicted in the book and movie Hidden Figures, West is often included as one whose scientific contributions went unrecognized at the time. However, in 2018, she was finally recognized for her contribution to GPS development by the Virginia General Assembly and inducted into the U.S. Air Force Space and Missile Pioneers Hall of Fame. At the induction ceremony, the commander said, “She rose through the ranks, worked on the satellite geodesy, and contributed to the accuracy of GPS and the measurement of satellite data. As Gladys West started her career as a mathematician at Dahlgren in 1956, she likely had no idea that her work would impact the world for decades to come.”

West said of herself, “When you’re working every day, you’re not thinking, 'What impact is this going to have on the world?' You're thinking, 'I've got to get this right.'”

Since my little airplane icon never fails me, I guess she did.

Although she was instrumental in creating GPS, West still prefers to use a paper map.